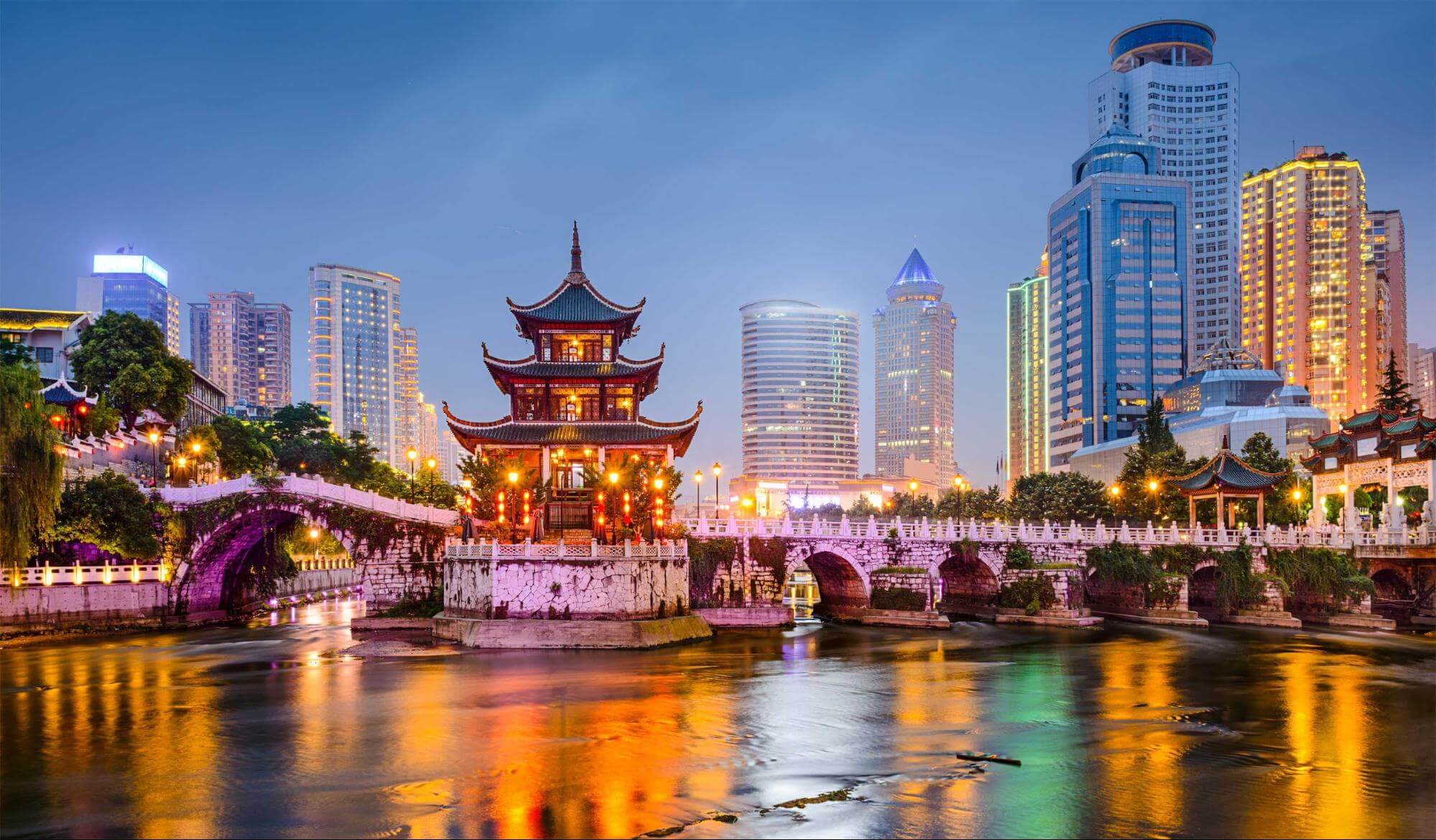 The People's Republic of China is an East Asian socialist country, the third largest in the world (about 9.6 million km2); an economic superpower. It has access to East China, South China and Yellow Seas, and the Korean Gulf.

In addition to the mainland, this state owns the islands: Taiwan, the groups of Penghu, Jinmen, Matsu islands.

It is located in UTC +8 time zone.

The People's Republic of China is the first country in the world in terms of the number of inhabitants:

1.4 billion people, with a population density of 146 people per km2.

Regional division in China is as follows, according to several gradations:

How many countries border china

The Chinese civilization is one of the most ancient civilizations in existence today. Chinese scientists claim that its age reaches five thousand years, and the existing written evidence speaks of at least three and a half millennia. Geographically, the emergence of Chinese civilization took place in the basins of the Yellow and Yangtze rivers. China’s economy was based on agriculture, which created advantages over less developed nomadic neighbors.
It is generally accepted that the history of China is divided into three conditional periods:

This period is characterized by a low dependence of small regions on the power of the main government, political instability, internecine wars, and economic decline. Religious leaders are often in the leadership of the country. Of the three dynasties listed above, the Shang dynasty should be distinguished as the most powerful.

It is characterized by the rule of successive imperial dynasties. During this period, thanks to the consistently effective rule of the dynasties, China became the strongest country, one of the world leaders of that time.

The process of strengthening the country began with the reign of Emperor Shi Huangdi (the first of the Qin dynasty), who was able to unite China. He began the process of building the Great Wall of China, and organized the construction of wide (15 meters) multi-lane roads connecting parts of the empire with each other.
China at this time was repeatedly subjected to conquests, but each time the conquerors assimilated with the people, creating their own dynasties of rule. The most striking examples are the occupation and conquest of China by Genghis Khan (13th century, created the Yuan dynasty) and the Manchus (16th century, created the Qing dynasty, the last in the history of China).

The most interesting sights of China

One of the new wonders of the world, the largest architectural monument of our time, part of the UNESCO World Heritage Site. A defensive structure designed to protect the population and values ​​of China from nomadic peoples, and to mark the border of a powerful state. The length of the wall is more than 21 thousand kilometers, the thickness of the structure is from five meters, the height is from 5 to 10 meters.

Built using the features of the terrain, it runs along the mountain range, going down into gorges and climbing high ascents, thanks to which it fits very organically into the landscape and looks very harmonious. Most of the well-preserved sites are located near Beijing.
Location: Huairou, China (CHJC + Q4 Bohaizhen, Huairou District, Beijing, China)
Coordination: 40°25′N, 116°05′E 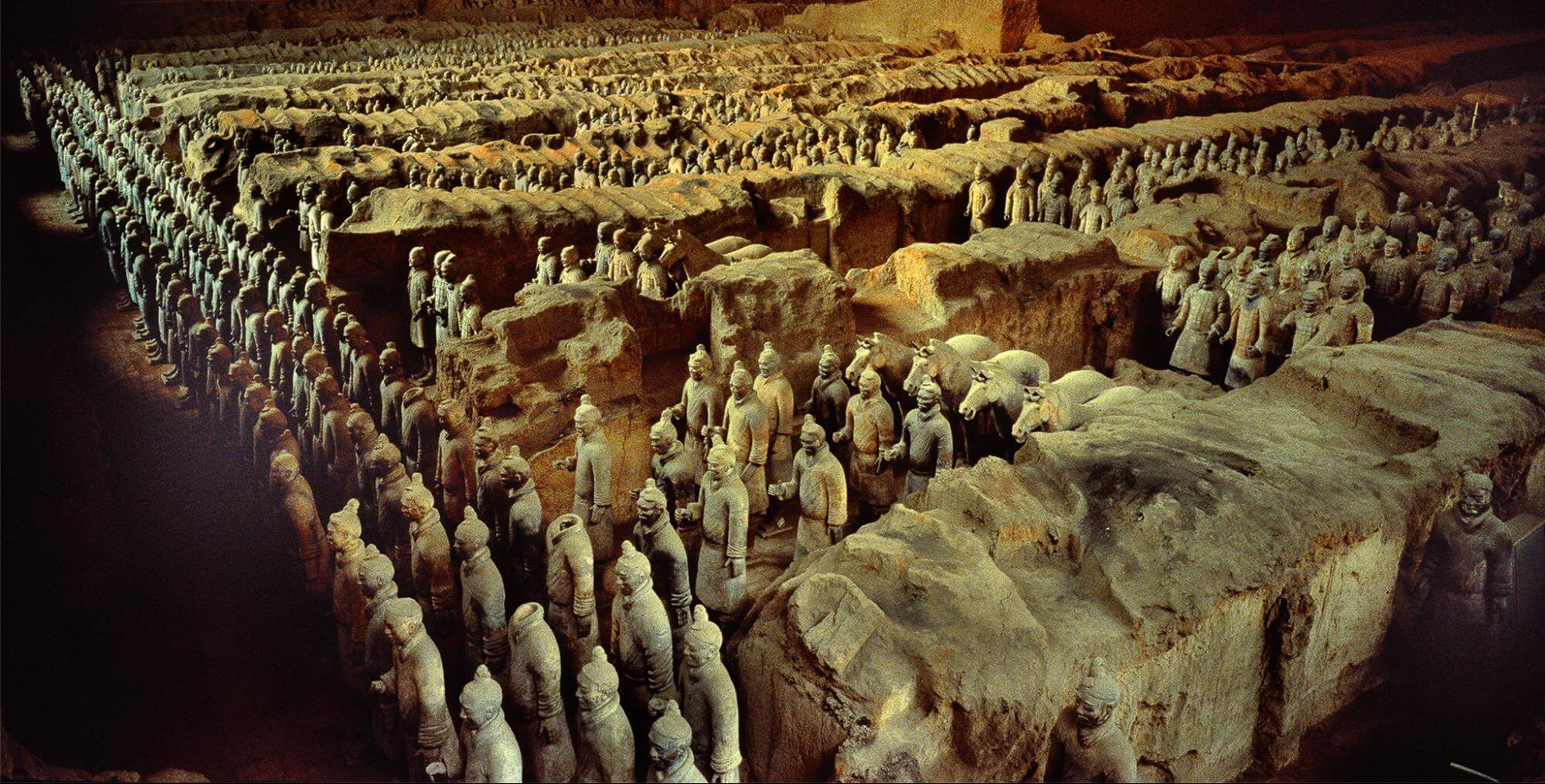 One of the largest monuments from the beginning of Chinese statehood, a UNESCO World Heritage Site. It is part of the tomb of the greatest emperor of China, Shi Huangdi, who united the disparate parts of the country into one great empire at that time. It represents more than 8 thousand clay statues of warriors, their commanders, horses and chariots, buried together with Emperor Shi, and discovered in 1974, next to the tomb of the emperor. All the statues are not alike.
Location: Lintong District, Xi'an, Shaanxi, China, 710612 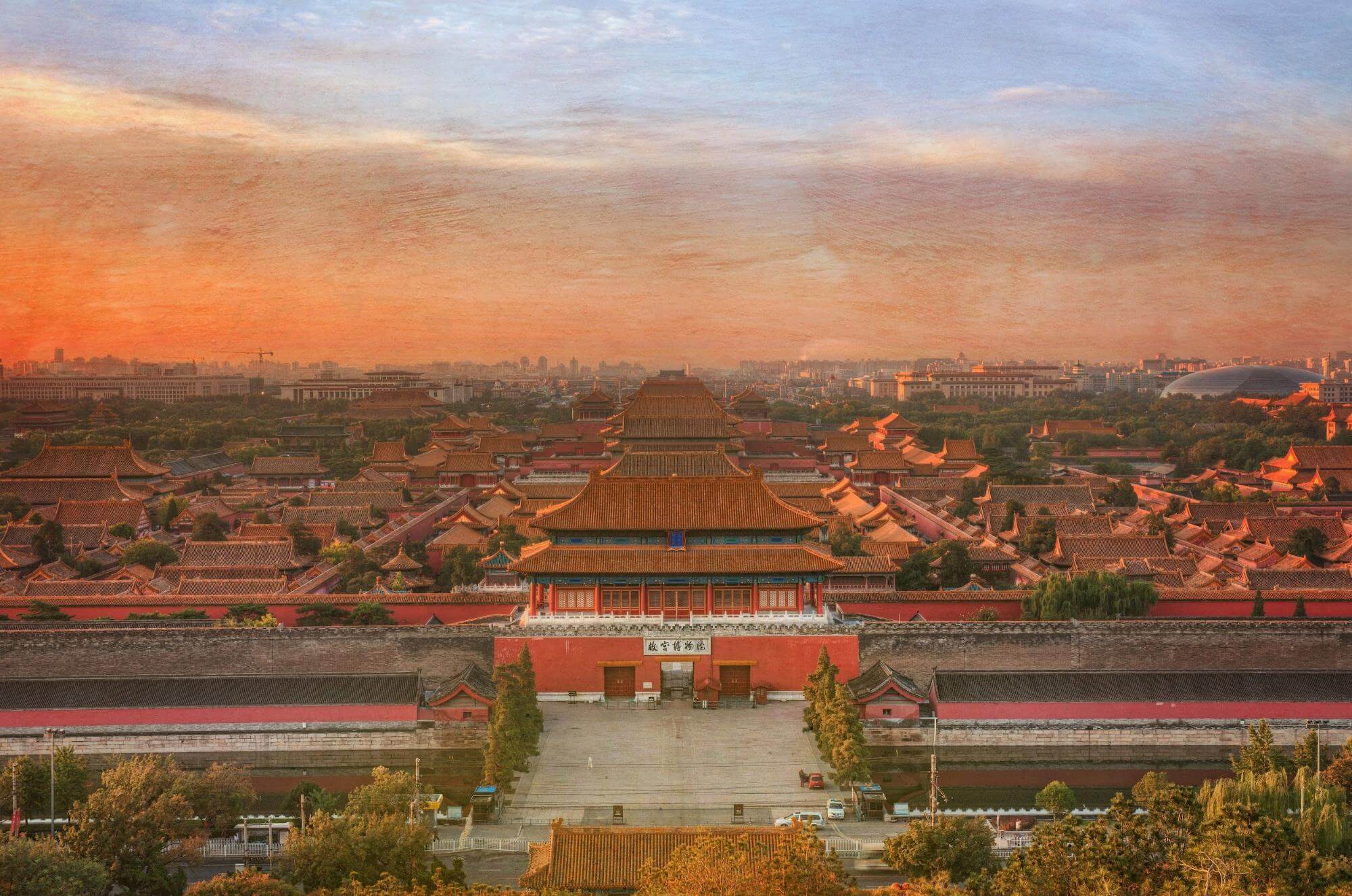 The palace ensemble, made in the style of traditional Chinese architecture. The center of ancient Beijing, the capital of the empire, where entry was forbidden to everyone except the emperors, their families and associates. It is larger in size than any other palace in the world (includes more than 900 buildings and about 9000 chambers); It is a UNESCO World Heritage Site.

In the past it was the center of the political life of the Chinese Empire, served as home to 24 emperors and two dynasties: Ming and Qing.

Currently one of the main tourist attractions in Beijing, more than 7 million people visit the Forbidden City every year. 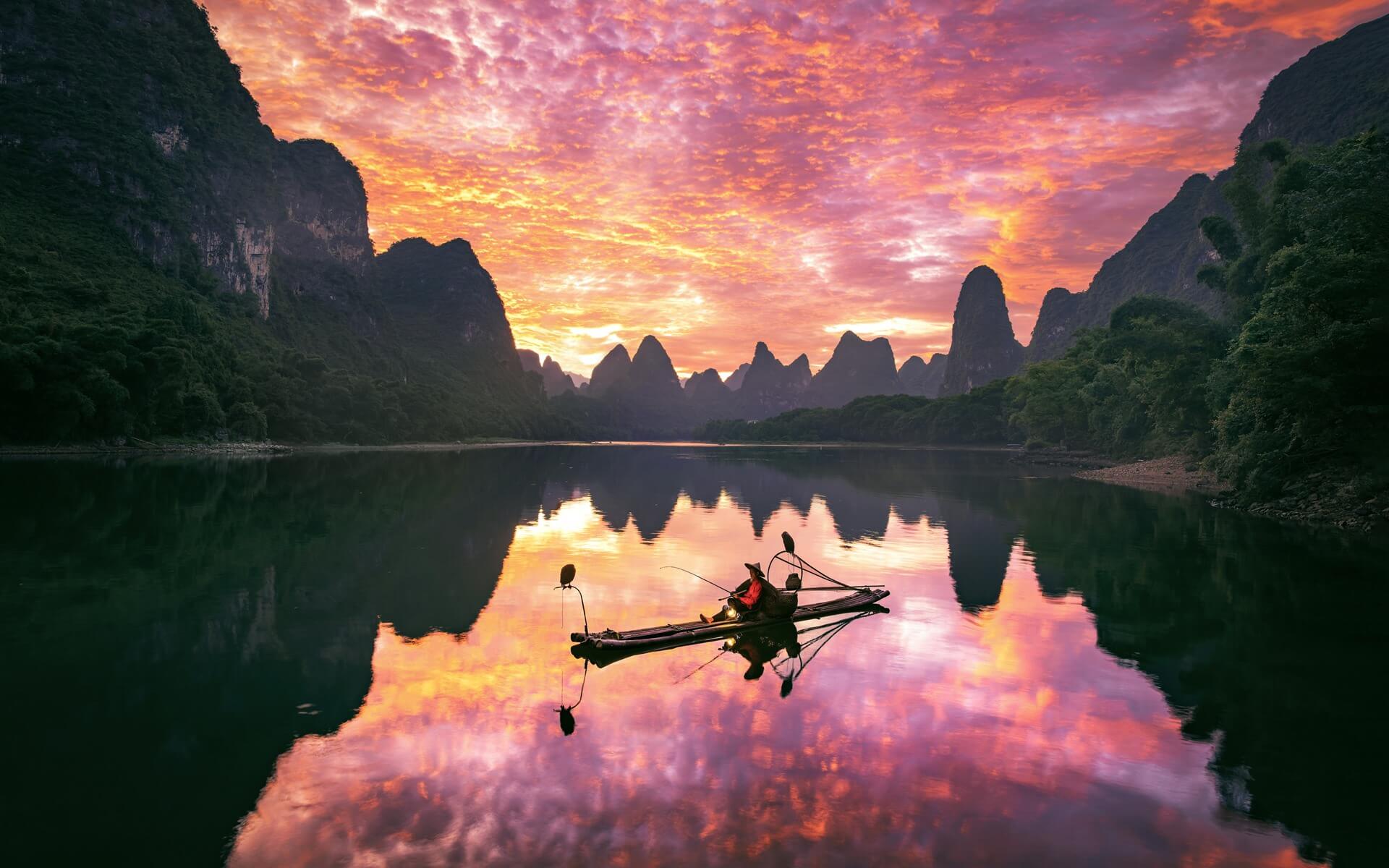 Nature, breathtaking water landscapes of China; the Li River in Guilin is a popular source of inspiration for many and many artists of the Chinese Empire in the past. And now it is the most popular place for tourists who love photos with natural attractions.

There is a popular tourist destination located 60 kilometers to the southeast, the town of Yangshuo. And between these two cities there are picturesque places: villages, bamboo groves , the very landscape that displays China in its traditional form. 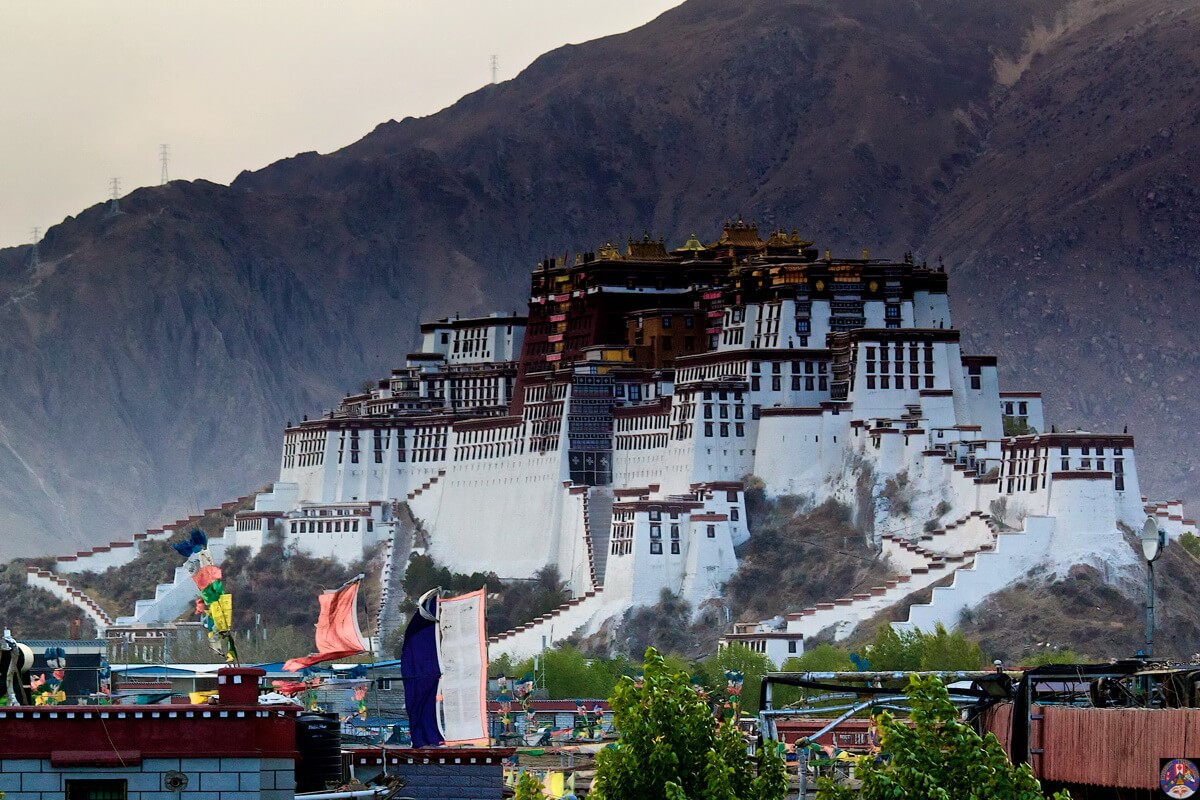 In the past, it was a palace and a Buddhist temple complex. Now it remains a functioning Buddhist temple and a place of pilgrimage for Buddhists. Located at an altitude of 3.7 km, the historic ensemble of the Potala Palace is a majestic complex of enormous cultural, historical, religious and artistic significance. Founded by King Songtsen Gampo of Tibet in 600 AD. It is a UNESCO World Heritage Site.

The economic upturn in China since the end of the 20th century has also fueled strong development in air transport, and Beijing has become an important international transport hub. Today in the country: 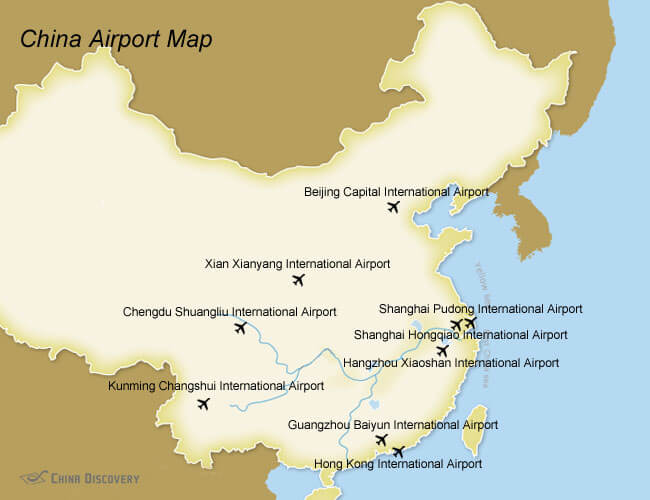 The largest train stations in China

Trains are the most popular and affordable form of transport in China. The country is one of the three world leaders in terms of the length of railways and ranks second in the rating: the total length of the railway track is more than 112 thousand km (55.8 thousand km are electrified). The vast majority of railway companies are managed by the Ministry of Railways. The main operator is China Railways.

China's rapidly developing national high-speed traffic system is the leader in the world, overtaking Europe and Japan. And in 2006, in Tibet (at an altitude of 5 thousand meters), the Qinghai-Tibet railway was launched, the highest railway in the world. 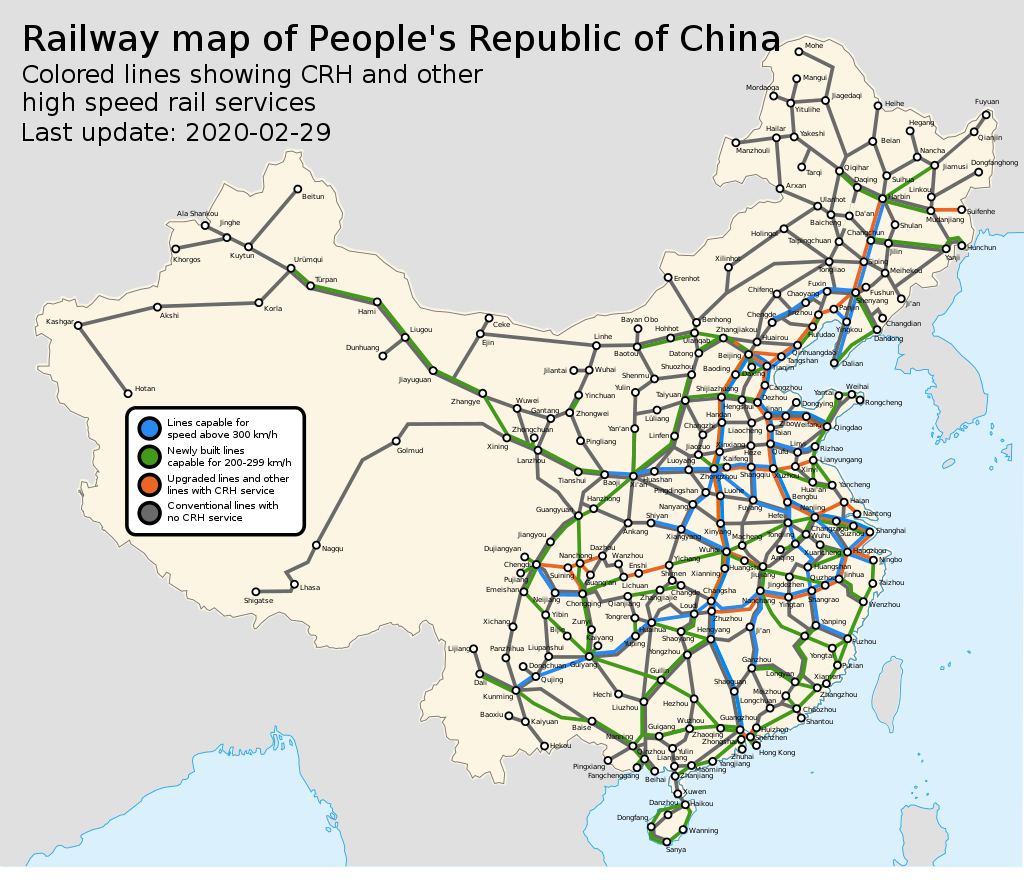 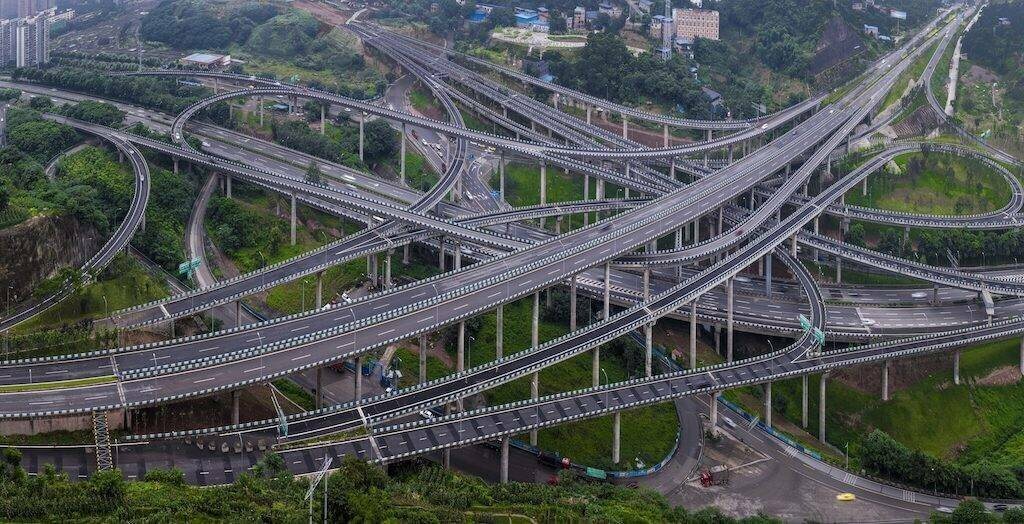 China has been at the forefront of the automotive industry, not yielding the palm over the past couple of decades.

The total length of highways in the country is 4.2 million km, including rural ones. The country is connected by the China National Highways (main roads through mainland China) and China Expressways (national and provincial expressways). About 10% of the settlements in China have no road connections.

New generation highways stretch for more than 110 thousand km. The most famous of them are Burma Road and Karakoram Highway.

There are about 110 million passenger cars in the country's car fleet. Nevertheless, bicycles are the most common type of transport.

In cities, the road communication has a complex structure, the quality of roads is at a high level.

An amazing natural wonder, recognized by UNESCO as a World Heritage Site (in 1992). Zhangjiajie National Park is located in the northwest of Hunan province in the Wulingyuan mountain range. This is the first national park in China. It was founded in 1982.

The main attraction of the park: more than 3 thousand weathered rocks in the form of pillars of quartz and sandstone. The highest of them is Mount Doupeng with a height of 1890 m. About ⅓ of the peaks with a height of over 200 m. The most impressive peak "Column of the Southern Sky" (1800 m) today is called "Avatar Hallelujah" in honor of the popular film "Avatar", the authors of which were inspired by the unusual relief of these places and transferred this image to the big screen.

Almost the entire territory of the park (98%) is covered with dense vegetation (720 plant species of 102 families), which has become home to a wide variety of animals (28 species are listed in the Red Book).