Ankara is the capital of the Republic of Turkey and the second most populous city in the country. It is located on the Anatolian plateau at the confluence of the Ankara and Chubuk rivers. One of the oldest cities in Asia Minor was founded in the 7th century BC., and today has a bright personality, harmoniously combining the modernity of the forms of the West and the ancient traditions of the East. The city is divided into two parts: a new one with pronounced modern features (in the south) and Old Ankara, which has preserved the features of ancient Turkey (in the north).

In 2018, the city of contrasts was visited by more than 3 million tourists from abroad and almost 50 million from different regions of Turkey.

Ankara climate and weather for today

The mild, moderately continental semi-arid climate was formed due to the mountainous relief: the average height of the city is about 900 m above sea level. Ankara's climate is characterized by well-defined seasons. Hot and long summer with a large difference in daily temperatures starts from mid-May and ends in September. The average temperature in July is +23 (sometimes up to +35). Winters are relatively cold and snowy. The average January temperature is +0.3, and the frosts rarely drop below -15. Spring comes quite late, autumn is protracted, smoothly turning into winter. A little more than 400 mm of precipitation falls per year, the bulk of which falls on the off-season. In summer, there are few rainy days. In winter precipitation usually falls often in the form of snow.

The tourist season in Ankara is a warm season (from April to October), its peak is in summer. In addition, a surge in tourist activity is observed annually during the New Year and Christmas holidays.

The most interesting sights of Ankara

Ankara is an ancient city dating back to the Neolithic era, famous for its architectural monuments. The first buildings in the city date back to 1200 BC 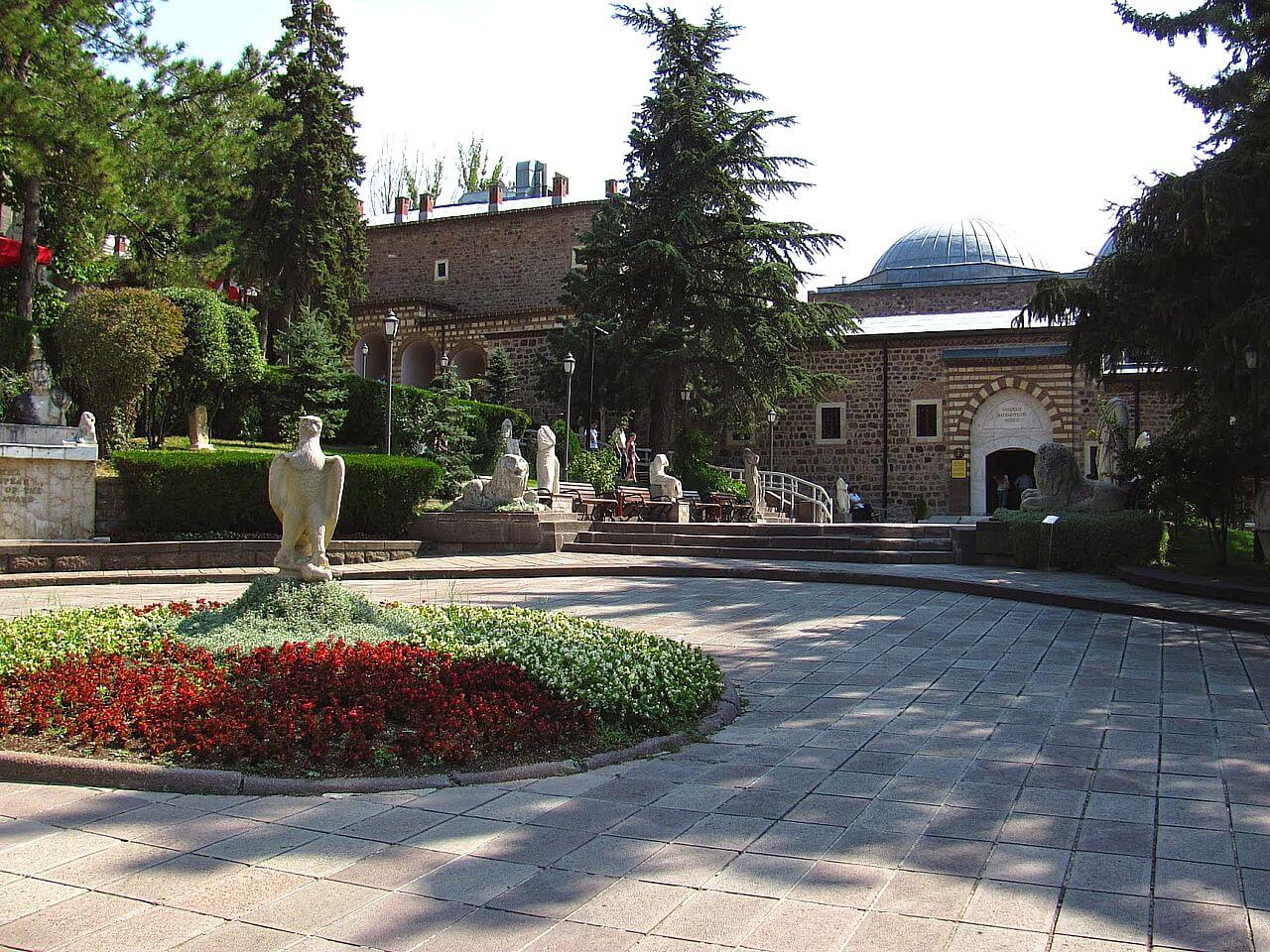 One of the richest museums in the world and the main historical museum of Turkey was founded in 1921. The museum is located in two historical Ottoman buildings built in 1470: one of the buildings is Mahmut Pasha Bedesteni, and the other is Kurshunlu Khan (hotel, caravanserai). In 1997, the Museum of Anatolian Civilizations received the European Museum of the Year award among 68 museums from 21 countries. Currently, the museum contains collections of the Neolithic, Bronze Age, civilizations of Assyria and Urartu, Hittites, Ancient Rome, Byzantine Empire, Ottoman Empire, covering a period of 7500 years. In the courtyard of the museum there is an 8-meter Hittite obelisk made of stone (13th century BC). 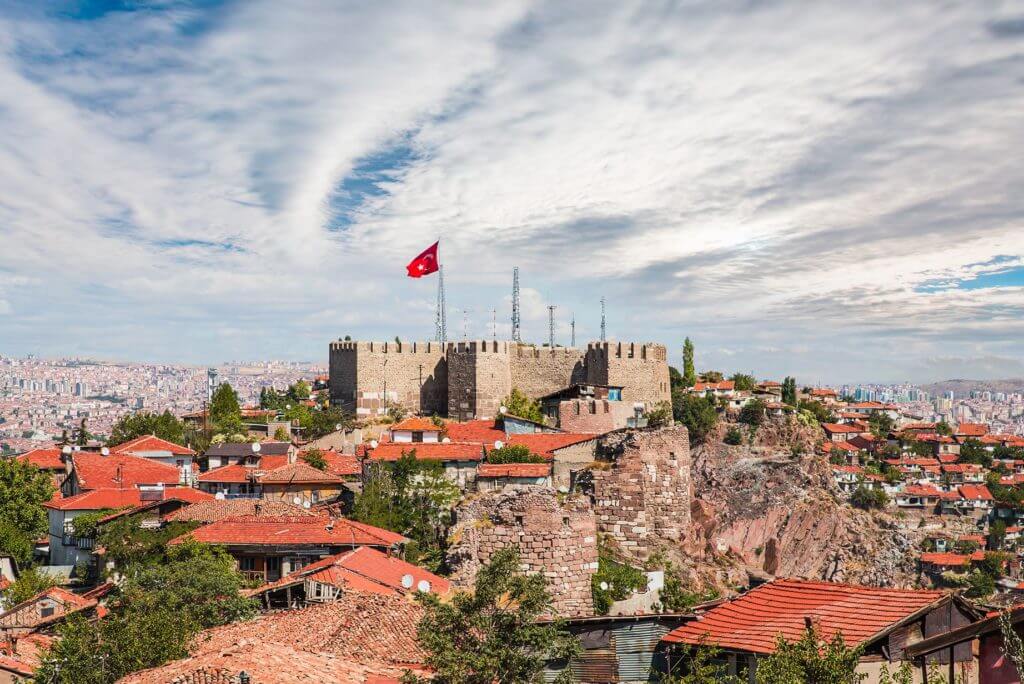 The Khizar Fortress is an important strategic site, located on the top of a hill and visible from almost anywhere in Ankara. The area of ​​the fortress is approximately 42 km². The citadel consists of two rows of walls. The exact date of construction is unknown: historians date the outer walls to the 800s. (times of the Byzantine emperor Michael II), and internal - 600s. The walls of the fortress carry the entire history of the city and are themselves a museum. The change of power and the masters of Ankara left their mark: everyone completed something, altered, often using secondary raw materials - monuments, columns, sarcophagi, gravestones, elements of an ancient aqueduct. The thickness of the walls reaches 8 m. Walls were built from the remains of ancient buildings. The first row of walls forms the citadel itself (an area of ​​350 by 150 m). 42 pentagonal towers with a height of 14 to 16 m are build along the walls. Inside the citadel, a residential Turkish village is still preserved. On the outer walls there are 20 square or round towers, at a distance of about 40 m from each other. The White Fortress is considered the top point of the building. Tourists are not allowed to enter it. The fortress offers a magnificent panorama of the capital and is one of the best observation platforms.

Most of the buildings of the fortress are under the protection of UNESCO. 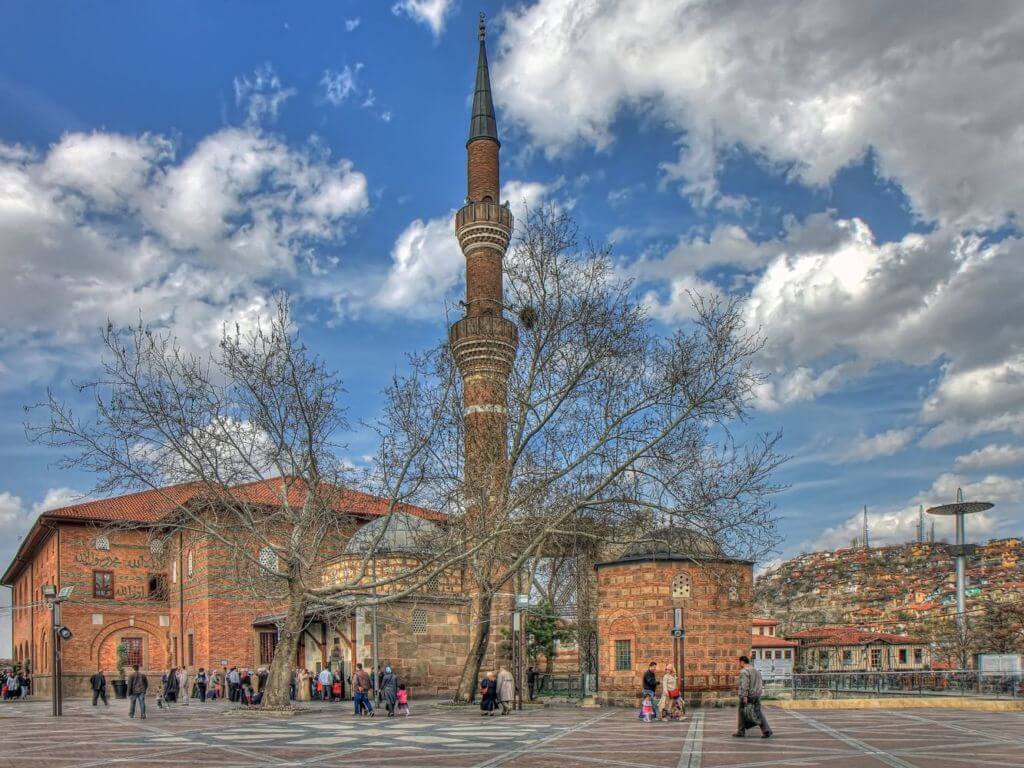 The Haji Bayram Mosque is one of the symbols of Ankara, built on the ruins of a Byzantine church in the historical district of Ulus. The exact date of construction is unknown, but it is believed that the mosque was built in the first half of the 15th century. The mosque was erected in honor of the Turkish poet and founder of the Sufi order Haji Bayramu-Veli, whose remains are buried in a tomb under the building. The brick-walled building with a tiled roof is rectangular in shape and stands on a stone foundation. Particularly noteworthy are the engraved wood ceiling and the tiled mosaic walls. The mausoleum was built in 1429 and occupies part of the building of the mosque. The facade of the building is made of marble, the roof is made of lead. Today this religious building is one of the most beautiful and significant in the capital of Turkey.

Ulus ("Old City'') is Ankara's area and the historical center of the capital and the focus of historical and architectural monuments. All the remaining Roman ruins are located in the center of Ulus. Near the Haji Bayram Mosque there is a religious building, the remains of which have been preserved since the reign of Emperor Augustus in the 4th century). From the temple of Augustus and Roma, only two high walls with the will of the emperor and part of the door have reached us. Another evidence of the former greatness of the Roman Empire is the 15-meter column of Julian, one of the oldest monuments in Ankara, located next to the remains of the temple. The column was erected in 362 in honor of the arrival of the famous Roman emperor Julian. Despite the fact that the column consists of many stones and granite slabs, it looks like a single whole. 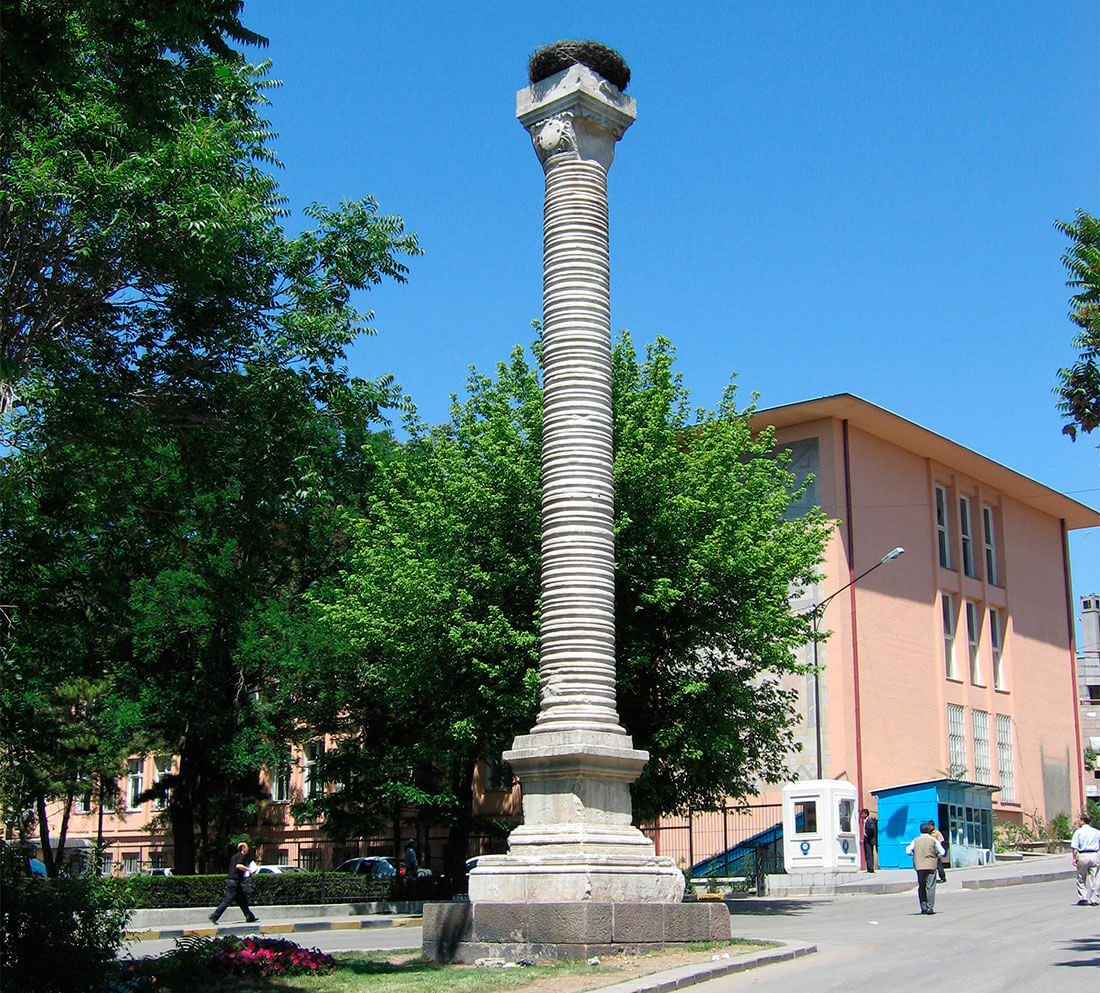 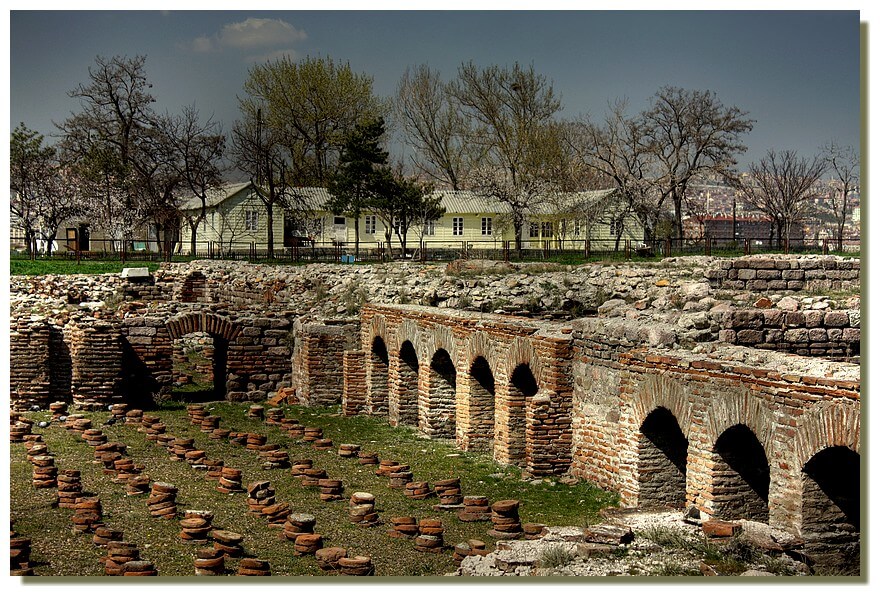 Roman baths are the largest ruins and the legacy of Ancient Ankara. This was once a huge bath complex (III century) measuring 80x150 m made of stone and brick, the construction of which was dedicated to the god of healing Aesculapius (Asclepius). Today, these are the remains of columns supporting floors and walls, with a clear structure of the premises: frigidarium (cold room), caldarium (hot room), pool. 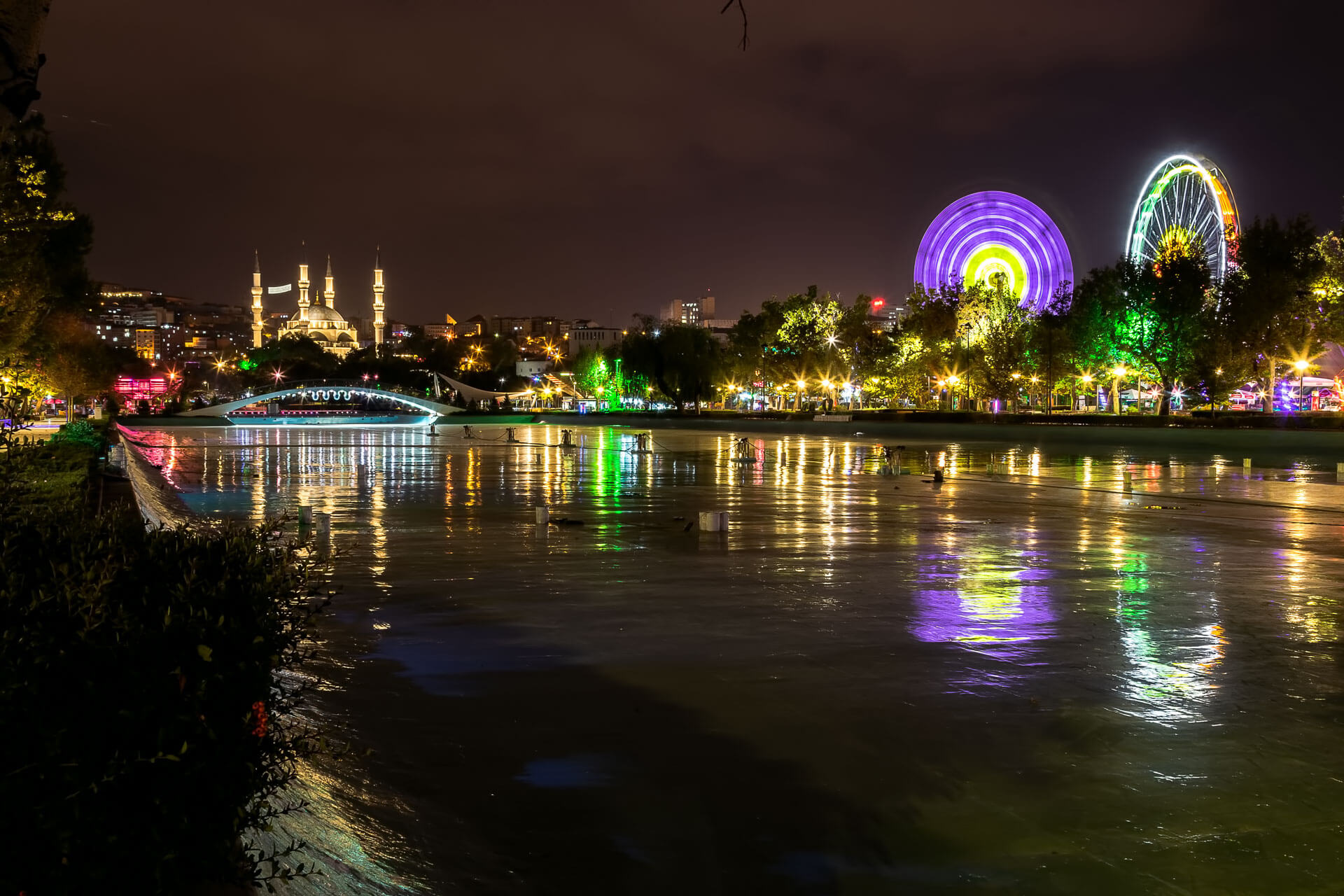 The most beautiful park in the Turkish capital is undoubtedly Genchlik Park (“Youth Park”). The opening of the park took place on May 19, 1943 on the Memorial Day of Mustafa Kemal Ataturk and the Day of Youth and Sports. This is the oldest resting place for residents in the very center of Ankara, but it has not lost its popularity today. The park, with an area of ​​more than 30 hectares, is filled with a variety of recreation areas, numerous attractions, cafes, beautiful alleys and illuminated singing fountains. In the center of the park there is a beautiful artificial lake, which is the main part of the park's pond and canal system. All kinds of events, holidays, fairs and festivals are often held in the park. The annual Ramadan Festival is held in early September and attracts a huge number of residents and guests of the capital.

Erimtan Museum of Archeology and Arts 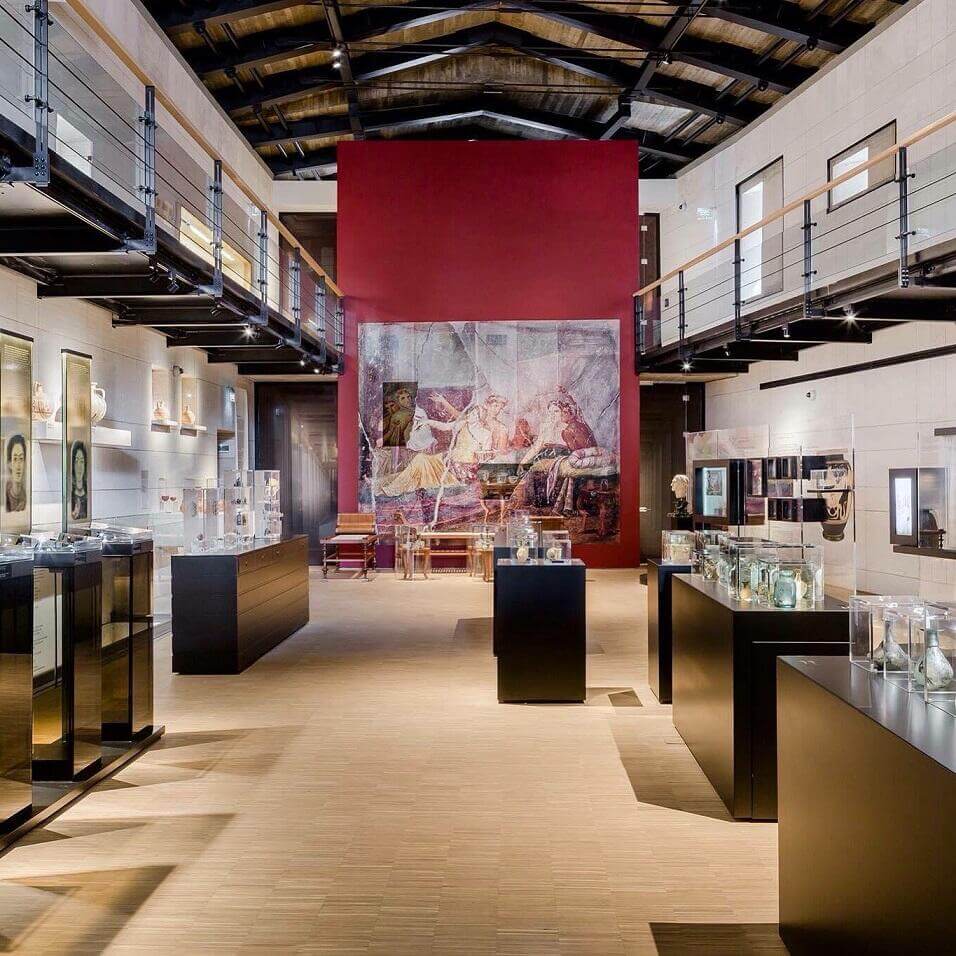 A unique museum of modernity in Ankara, combining both an archaeological museum and a musical institution. The museum's collection consists of nearly 2,000 artifacts, the vast majority of which are of Anatolian origin. In addition, the museum contains exhibits from the Bronze Age, Hittite and Byzantine periods, a large collection of coins and cuneiform tablets. This atmospheric museum is superbly equipped with the latest technology and regularly hosts private exhibitions, cultural forums, chamber concerts, and receptions. There is a café and a small garden.

How to get to Ankara: train stations and airports

All air traffic in Ankara passes through two international airports:

Ankara Central Railway Station (Ankara Gar) is a multifunctional commercial building, as well as one of the high-speed railway stations. Ankara's main transport hub. The area is 194,460 m², including the building area (175,000 m²). The station consists of 3 platforms and 6 railway tracks, which can simultaneously accommodate up to 12 high-speed trains. On the first platform there is a museum car.

The Ankara Metro is young: its history began in 1996. Currently, the metro in Ankara has two lines: green - Ankaray (9 km) and red - Metro (15 km). In general, the Ankara metro is a combined system, consisting of the light rail line and two metro lines, which were formed by combining the previously opened five lines. Ankaray runs from Asti bus station to the eastern suburb of Dikimevi. Until 2019, the total length was 64.36 km. Passenger traffic is served by 56 stations. 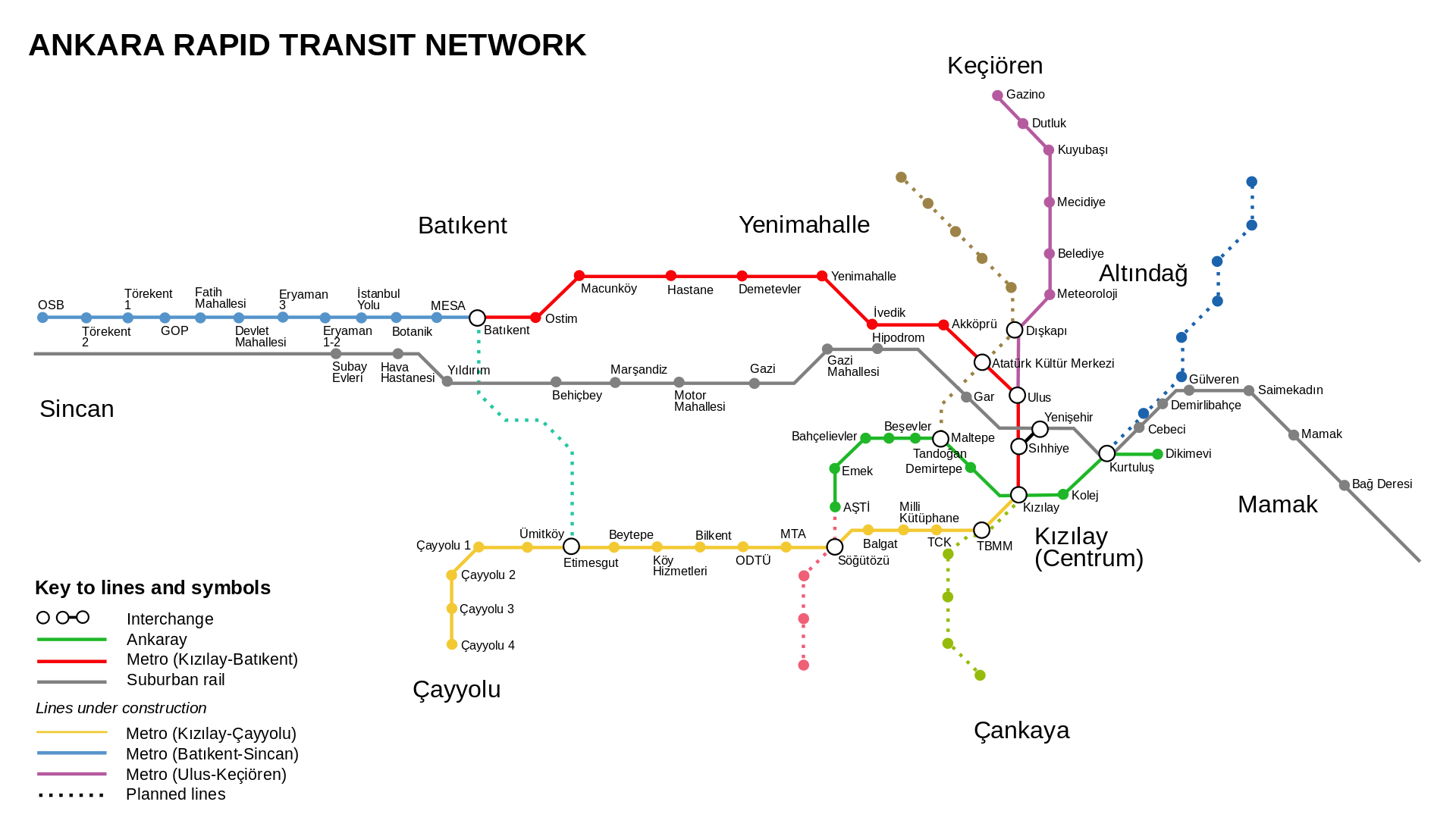 Dolmus route taxis duplicate existing bus routes and are a convenient and affordable means of transportation around the Turkish capital.

The most convenient, but also the most expensive type of transport. Private carriage is prohibited in Turkey, so only private individuals and companies with a license have the right to transport passengers.

A cable car with a capacity of 2,400 people / hour one way and a length of 3,257 meters connects the Yenimahalle metro station and the Teentepe center.

Ankara - the city of Ataturk

Modern Ankara is two cities in one, a combination of old and new. This happened as a result of the rapid development of the new capital, proclaimed in 1923 with the coming to power of Mustafa Kemal Ataturk “the father of all Turks”. Ataturk became the founder of the modern Turkish state and the first president of the Turkish Republic. Mustafa Kemal appreciated the strategic position of Ankara and put a lot of effort into the development of this city and the modern appearance of the capital. Pursuing a policy of modernization of the entire country, Kemal invited specialists from Europe to design the capital and its construction. As a result, a new city with modern (for that time) architecture appeared to the south of Old Ankara, which gradually acquired factories, banks, trading and insurance companies.

Today Ankara is divided into two parts by the 5 km long Ataturk Bulvari running from north to south. In the north, the boulevard is decorated with a large transport interchange, Ulus Square. It's decorated with a statue of Ataturk on a horse.

The great Turkish ruler died in 1938 and was buried in the Ethnographic Museum in Ankara. In 1953, the sarcophagus was moved to the mausoleum (Anitkabir) built on the top of the hill, which has been open to visitors since 1960. Every new member of the government must visit this sacred place for all Turks before taking office. Tourists have the opportunity to see only the upper memorial plate. Ataturk's body rests in the underground part of the mausoleum.

The total area of ​​the complex is 750,000 m², including the mausoleum, park, museum and other buildings. The complex consists of four components:

The complex displays a unique collection of cars that Ataturk drove. A museum with the president's personal belongings and a rich library will acquaint with the life of one of the greatest people of modern Turkey.