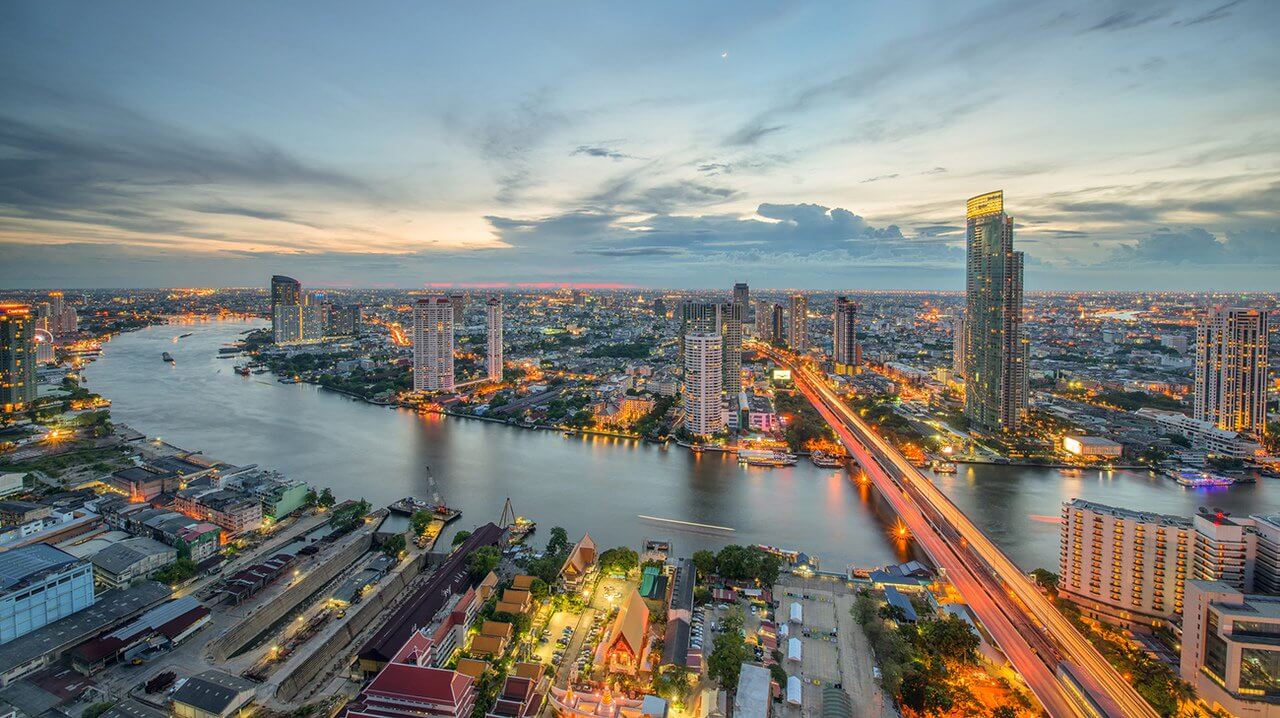 Bangkok is a young and rapidly developing metropolis of Southeast Asia, founded in 1782. Local residents have the abbreviated name "Krung Thep''. Also the full name of the city is included in the Guinness Book of Records as the longest geographical name (168 letters).

The capital and largest city is located near the confluence of the Chao Phraya River into the Gulf of Thailand in the South China Sea. It covers an area of ​​more than 1.5 thousand km ². Bangkok is home to nearly 5.7 million inhabitants and one of the most cosmopolitan cities in Asia. The population density is 3617 people. / Km².

Bangkok is one of the three leaders in attendance from year to year. In 2018 it topped this list, receiving 23.7 million tourists.

Bangkok climate and weather for today

The climate of Bangkok is sub-equatorial with pronounced seasons: dry cool, dry hot and rainy. A distinctive feature is a slight change in daytime temperature throughout the year (within + 28 ... + 35). It becomes only 4-5 degrees cooler at night. The most comfortable climate is in dry and cool seasons (from mid-November to late April): air temperature + 28 ... + 31 and almost no precipitation. During this period, there is a tourist peak. The rainy season (from May to October) is accompanied by cloudiness and a lot of precipitation: tropical showers last 15-60 minutes, sometimes several times a day. The wet season is regularly accompanied by floods, which are familiar to local residents.

The most interesting sights of Bangkok

The Thai capital is a harmonious mosaic of history, tradition and modernity that attracts millions of tourists from all over the world. Here, every tourist will find entertainment to their liking: historical monuments, oriental architecture, palaces and beautiful temples, authentic markets, skyscrapers and millions of lights of a modern city, numerous restaurants and cafes. 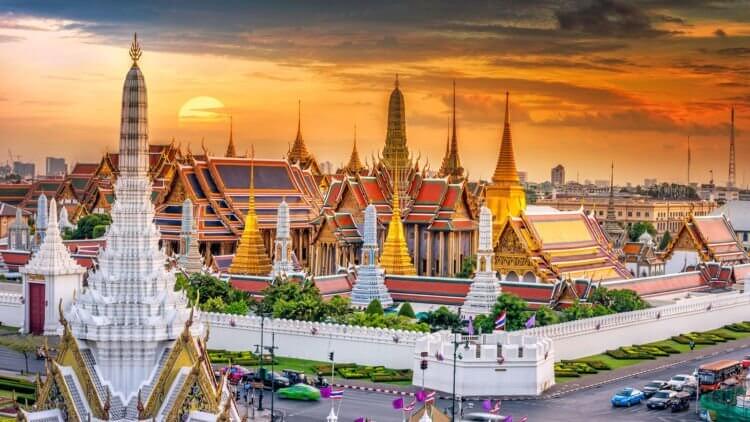 The Grand Palace is a complex of buildings from 1782-1785 on the banks of the Chao Phraya River. They have served as the residence of the kings of Thailand since the 18th century. Currently, the palace is not used to house the kings of Thailand, but it still hosts annual royal ceremonies, as well as royal weddings, funerals and state receptions.

The palace has a rectangular shape and covers an area of ​​more than 218 thousand m2, which is surrounded by walls with a total length of 1900 m.

The palace complex is one of the top 3 attractions in Bangkok. It is open to visitors, but everyone who wants to get inside must follow the dress code: no mini, shorts, neckline. 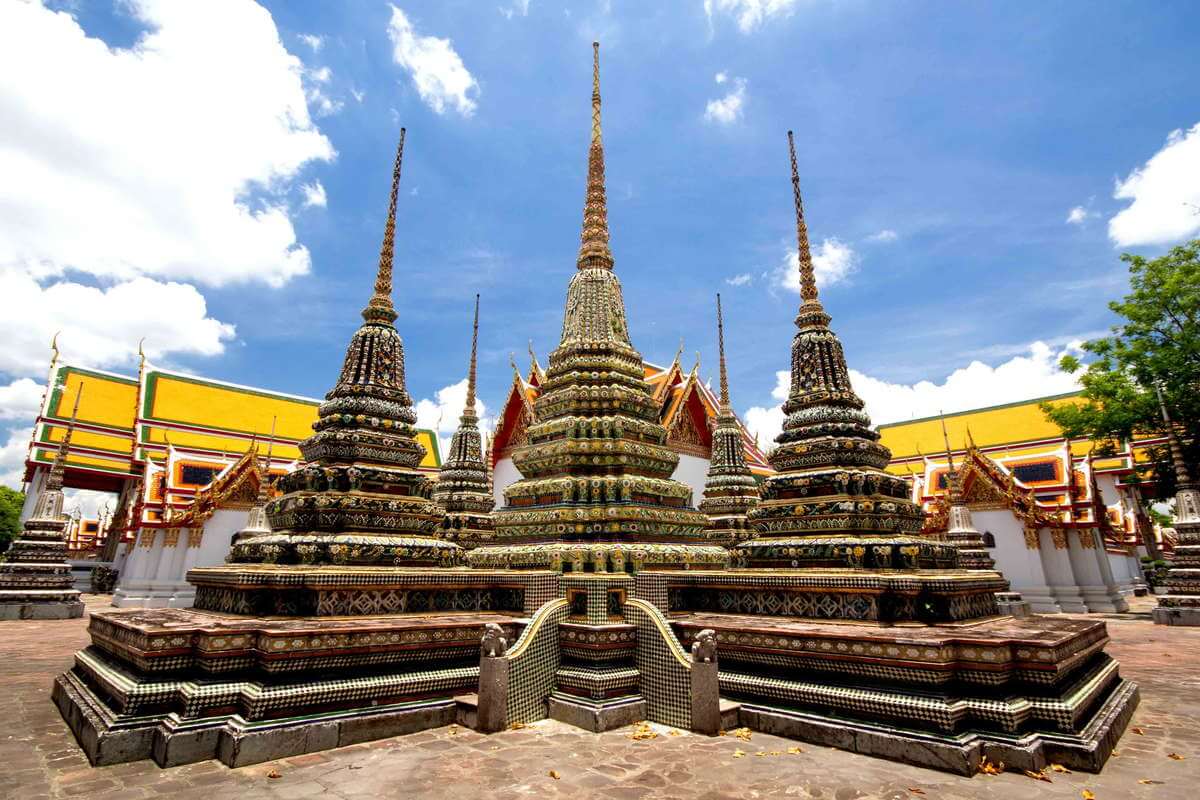 Wat Pho (Temple of the Reclining Buddha) was built in the 16th century on the island of Rattanakosin. It is one of the oldest temples in Bangkok, ranking first among the six first-class, top-class royal temples in Thailand.

The temple complex covers an area of ​​80 thousand square meters. It houses the largest collection of Buddha images, the most impressive of which is the Reclining Buddha (46 m long).

In addition, the Temple is recognized as one of the earliest centers of public education. The heritage of which in the form of marble illustrations and inscriptions was recognized by UNESCO in the Memory of the World Program. Wat Pho was supposed to serve as a place of education, so an illustrated encyclopedia was engraved on the granite slabs, covering history, medicine, health, customs, literature, proverbs, lexicography, and Buddhist religion. Today, Wat Pro is considered the first university in Thailand and continues to be the center of traditional Thai medicine with its own school. 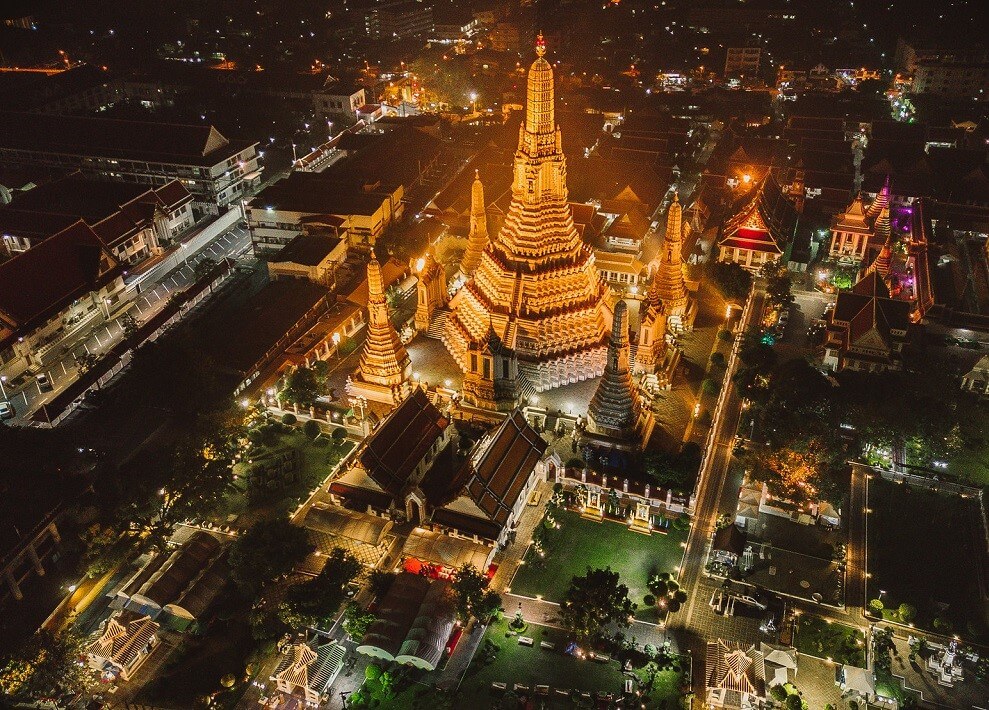 Temple of Sun Dawn or Morning Dawn is a visiting card of the capital of Thailand and a functioning temple. It was built in the middle of the 19th century on the western bank of the Chao Phraya River opposite the Royal Palace. One of the most famous and beautiful sights in Asia, which has absorbed the heritage of Buddhist and Hindu cultures. The main object of admiration of the temple is the 79-meter chedi (pagoda). It’s entire surface is covered with unique ceramic tiles and multi-colored Chinese porcelain. Before the modern skyscrapers, it was the tallest structure in Bangkok. Until now, the temple hosts important Buddhist ceremonies, which can be witnessed by any guest of the capital. 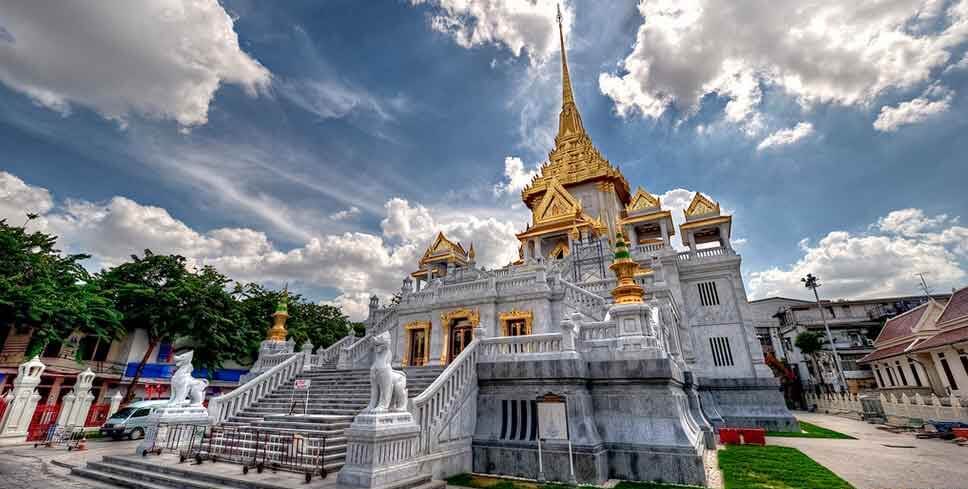 The Temple of the Golden Buddha is located in the central part of the Thai capital in the Yaowarat area and is adjacent to Chinatown. The 3-storey temple complex was built in 1956 and includes: a temple, a museum and a souvenir shop. The main treasure and attraction of the temple is the statue of the seated Buddha, the world's largest golden statue (5.5 tons, the height of the statue without a base is about 3 m, the whites of the eyes are made of pearls, and the pupils are made of black sapphires). The statue is listed in the Guinness Book of Records as the world's largest religious object, cast from solid gold. Visitors to the temple are encouraged to buy a bird and release it for good luck. 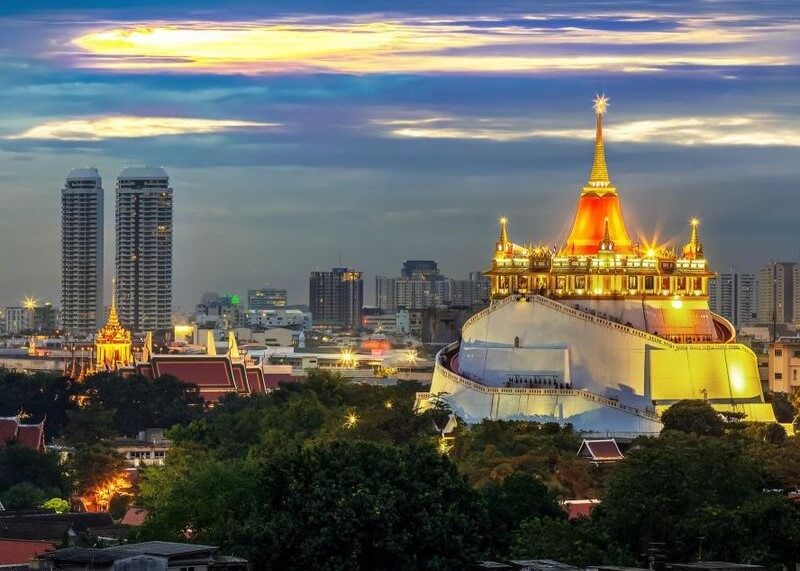 Temple in Bangkok Wat Saket (Golden Mountain) is a Buddhist temple located in the eastern part of the Old City on an 80-meter man-made hill. Wat Arun occupied the leading position as the tallest building in Bangkok, with a total height of 76 meters, before the construction of the temple. The main attraction of the temple is the 58-meter golden chedi. In addition, the upper floor of the temple is equipped with an observation deck with 318 steps leading to a magnificent panorama of Bangkok.

Old large trees grow on the territory of the temple, in the shade of which are the main chapel, the hall of initiation and the library. On the way to the temple, you can see sarcophagi and tombstones, as a reminder that the temple served as a crematorium during the plague. 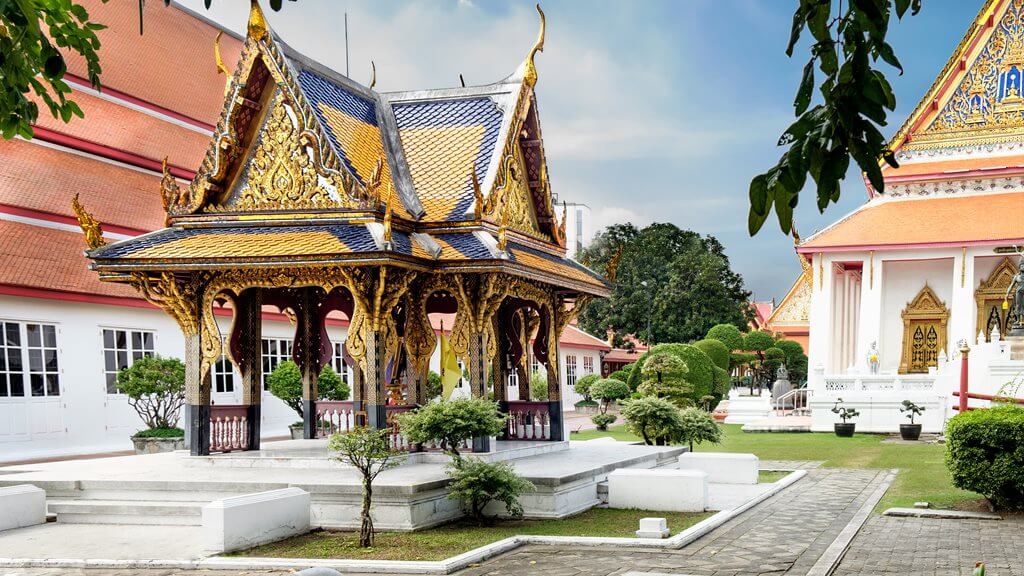 The Bangkok National Museum is the largest museum in Southeast Asia with unique collections of Thai art. Museum located in the Phra Nakhon district of Bangkok and occupies the former Wang Na Palace (Front Palace). The founder of the museum complex is King Rama V. The museum was opened in 1874, and in 1934 it became National.

The National Museum has collected thousands of exhibits. It is a whole complex of several buildings, an 18th century temple with unique wall paintings and the surrounding area. 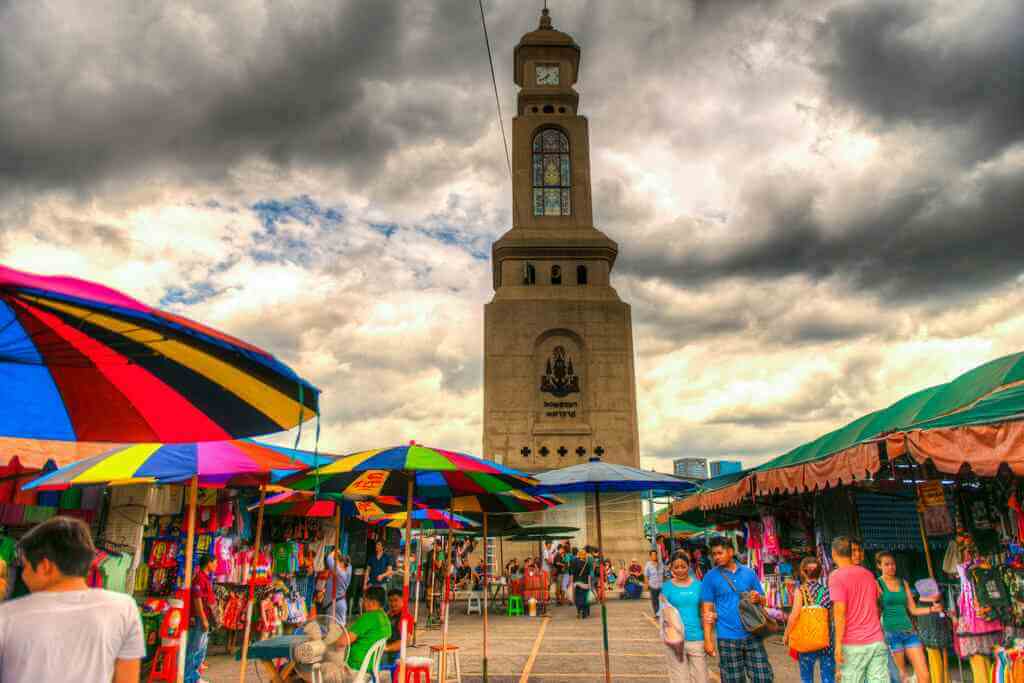 Chatuchak is the largest and most diversified market not only in Thailand but worldwide. The market with an area of ​​11 hectares is divided into 27 sites (they are divided by color and number), combining products of certain groups. More than 15,000 stalls operate, more than 11,000 suppliers provide supplies. The market first opened in 1942, and now more than 200 thousand buyers visit this trading floor every weekend. Bargaining is a prerequisite for a successful transaction, and friendliness and a smile are a condition for a profitable discount.

The illegal trade of wild and exotic animals flourishes on Chatuchak, the sale of which is prohibited in other countries, so the northwest part of the market is like a zoo. And in the center of the market there is a clock tower built in 1987. It serves as a great landmark for those lost in the trade labyrinths and a convenient meeting place. 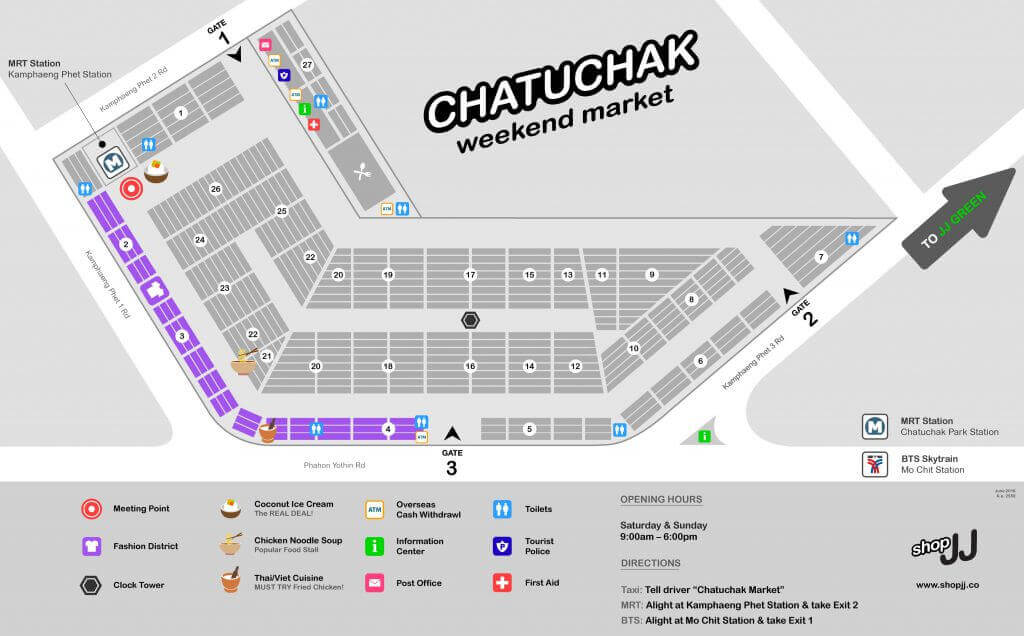 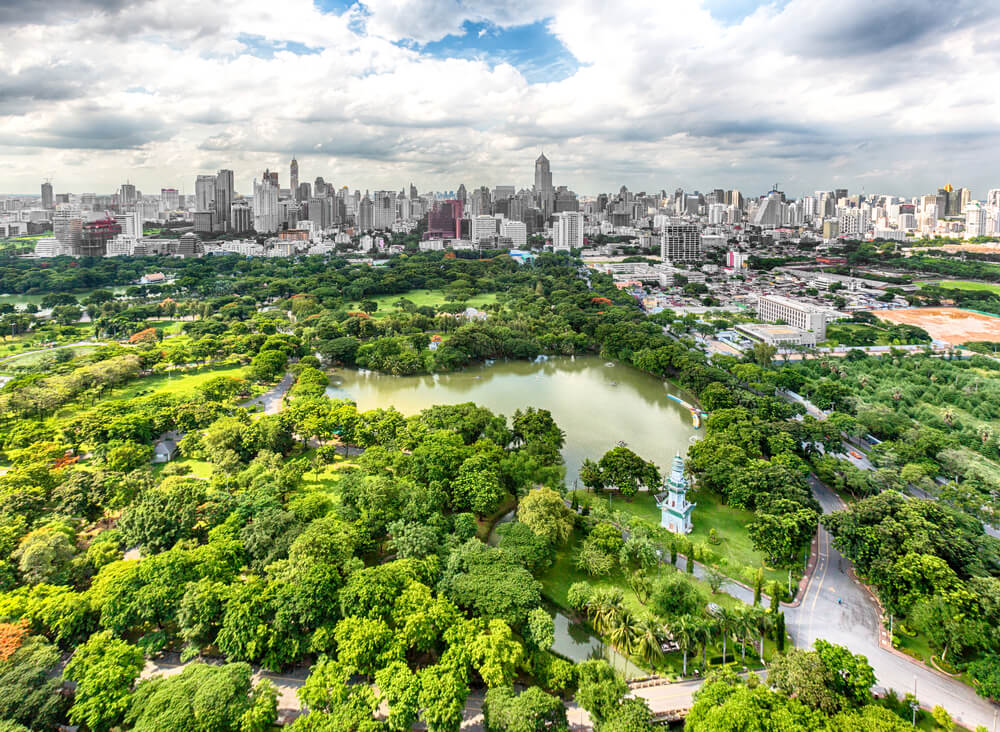 Lumpini Park is located next to the MRT Silom and Lumphini underground stations, at the intersection of Rama VI and Silom streets. It was founded in the 1920s on the territory belonging to the king, and named after the place where Gautama Buddha was born, Lumbini (Nepal). Today, the park complex with natural relief covers an area of ​​more than 57 hectares. On its territory there are two lakes with a system of water channels in which turtles live, the first public library, a palm garden, various sports grounds, jogging and bike paths, and children's zones.

An oasis rich in greenery among skyscrapers is one of the most popular vacation spots in Bangkok: numerous benches, beautiful alleys with sculptures and fountains for walks and relaxation. It is forbidden to drink alcohol, smoke and walk pets in the park.

The main attraction of the park is the statue of King Rama VI, revered by descendants for his enormous contribution to the development of language and literature, which gave this beautiful park to the inhabitants of the city.

Thailand's most famous water market is located 100 kilometers southwest of Bangkok. Damnoen Saduak Floating Market is imbued with Asian flavor and completely immersed in the atmosphere of Thai culture. The market is made up of a labyrinth of narrow canals that are packed with boats. Damnoen Saduak includes three small markets: Ton Khem, Hia Kui and Khun Phitak. Here you can buy original souvenirs, buy fresh fruits and vegetables, taste traditional Thai dishes. The only way to get to the market is by water.

Nowadays, the market has become not just a trading platform, but also an attraction that is very popular with tourists. Every day it is visited by a huge number of guests and at noon the market is full.

How to get to Bangkok: train stations and airports 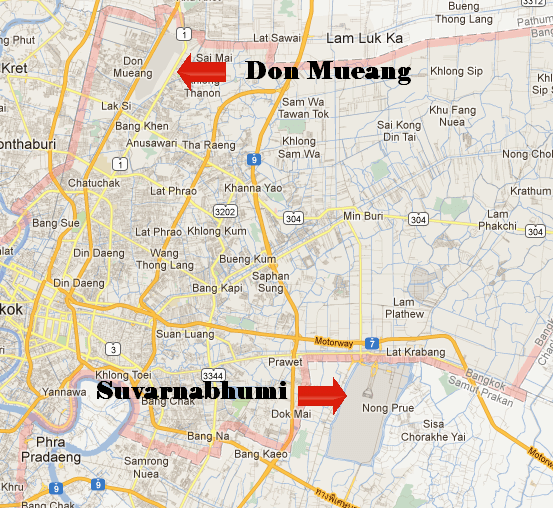 Bangkok's Hua Lamphong railway station is the most important transport hub in Thailand. Station located in the central part of the city in the Pathum Wan area (the terminus of the MRT underground metro station of the same name). Founded in 1916, it is a real historical monument. Today it has 14 platforms and is a connecting link of railways throughout the country, the total length of which is more than 4000 km. Passenger traffic: 60 thousand people daily and about 20 million people a year.

Intercity bus service is very common in the capital of Thailand. Three bus stations in Bangkok: Mo Chit (North), Ekkamai (East) and Sai Tai (South) are represented by three types of buses. Budget ones (orange) are the slowest, but they stop on demand and allow you to plunge into the flavor of the country. Blue buses are equipped for a more comfortable trip, and the most expensive and comfortable VIP buses are for long routes.

The city bus service is the busiest (over 400 routes). The vehicle fleet is represented by 13.5 thousand buses. Buses are divided into several types with different fares, which depend on the comfort of the bus.

All officially registered taxis have a Taxi-Meter on the roof and are painted in yellow-green and red-blue colors. Payment by counter. The fastest but most dangerous type of taxi is motorcycle taxis. Motorcycle riders wear orange vests. River taxi is a good way to avoid traffic jams, represented by several companies: River Express, Tourist Boat, Cross-River Ferry, Canal Boat

Tuk-tuk is a common mode of transport in Southeast Asia. This is a motorcycle with a sidecar under a roof, adapted to carry 2-3 passengers. Payment is negotiable.

The fastest, but quite expensive way to travel in Bangkok. The Bangkok metro is represented by three types of metro: 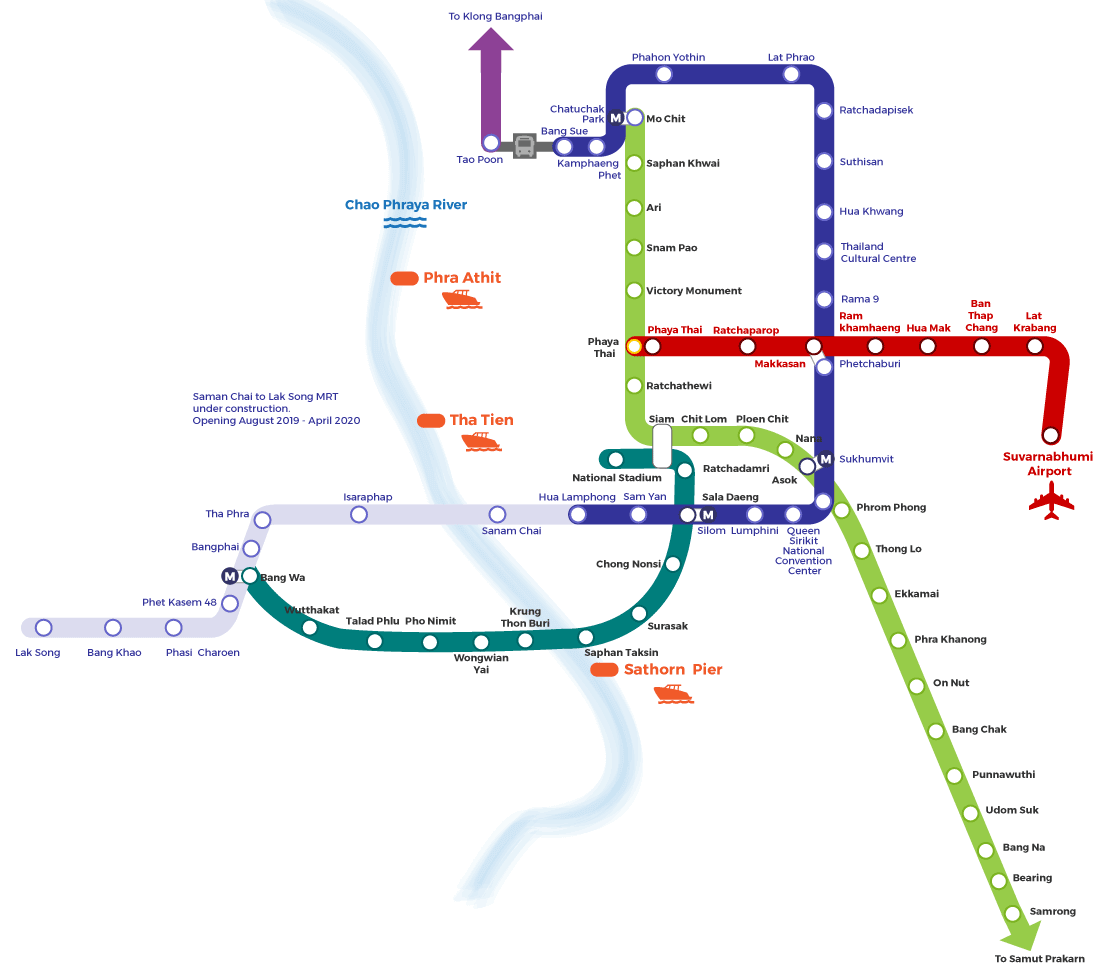 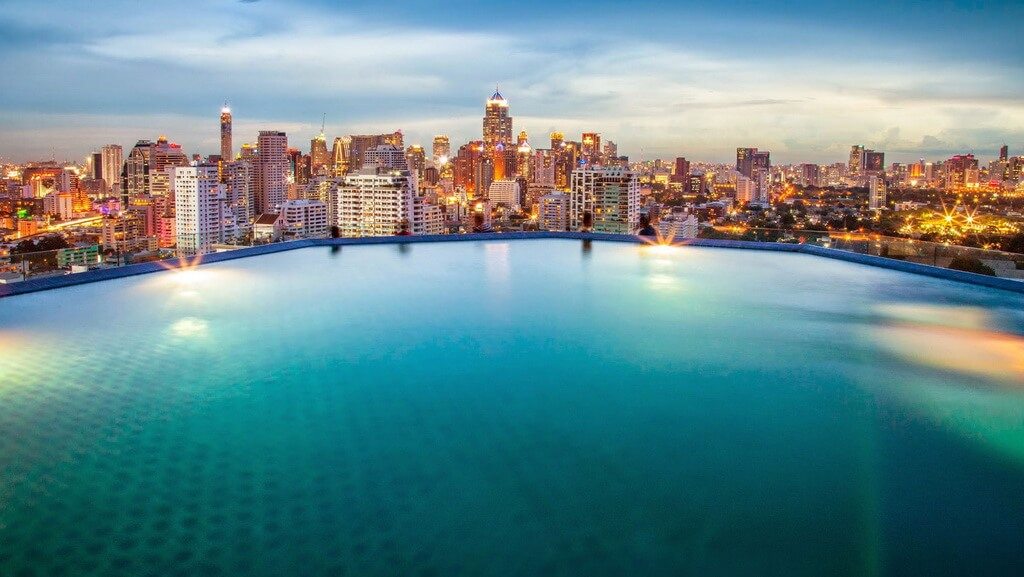 The great Thai city was founded in 1782. But scientists predict the approximate time when life in Bangkok will become impossible, because the city will go under water. And the point here is not only that the level of the world's oceans is rising. Other reasons are erosion of the coastal strip, subsidence of clay soil, on which the city stands. Why does the soil sink? The answer is simple: too much weight of buildings and infrastructural objects located on them puts pressure on it. The soil subsides here at a rate of 1.5 to 5.3 cm per year: too many people and too many of them have built everything, especially skyscrapers in the coastal strip. A significant part of the metropolis is already below sea level. In a more or less monitored period, up to 90% of all buildings in the city will be in danger of being flooded. First by centimeters, then to the level of the first floor. Science and technology will, of course, join the battle to save the multimillion-dollar Asian capital. The 21st century will decide who will be the winner: man or element.