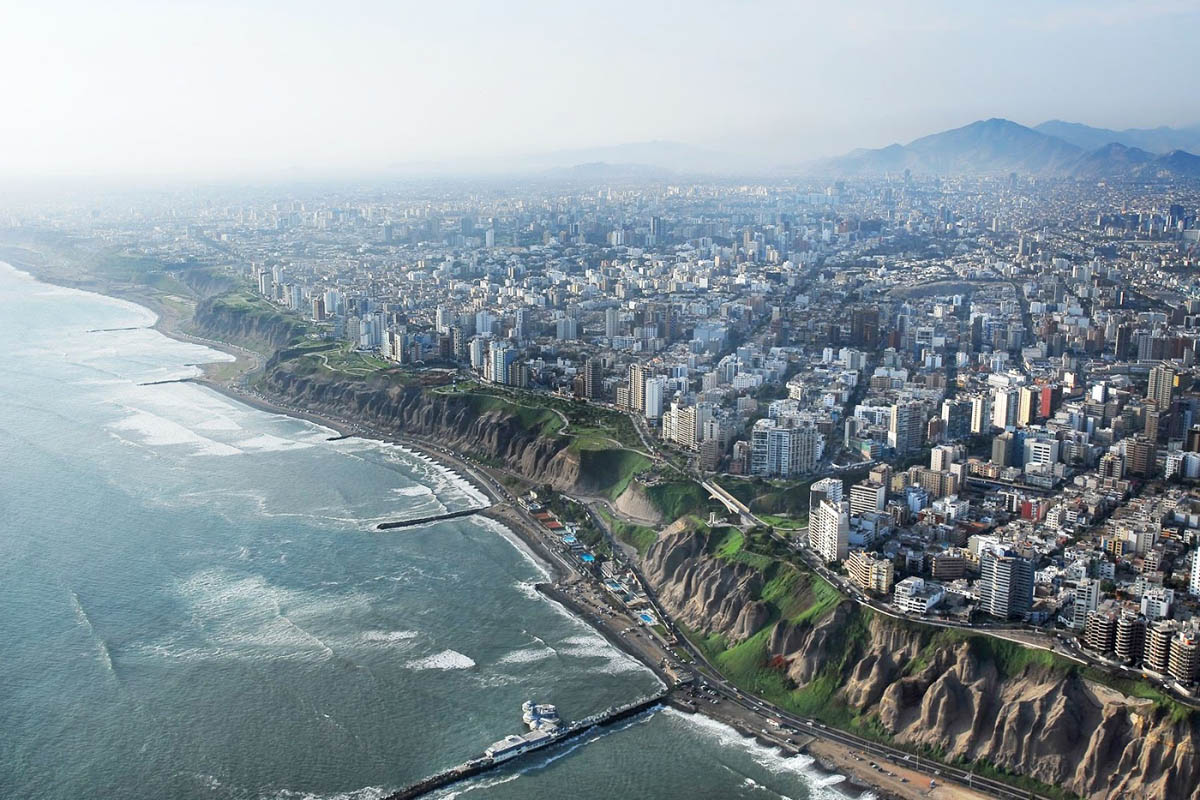 Lima is the capital of the Republic of Peru. The first stone of the capital city was laid by the Spaniards in 1535. The metropolis with a rich culture and history is located on the Pacific coast of South America, at the foot of the Andes on the banks of the Rimac River and covers an area of ​​2,672.28 km². Since 1940, the city's population has grown rapidly: by 1980 it had increased from 0.6 to 4.8 million people. Today, Lima is home to about 10 million people of different ethnic and racial backgrounds (⅓ of the population of the entire country).

Lima has a very convenient geographical position, which contributed to the consolidation of its status as the main shopping center in South America. In addition, the capital of Peru is the largest financial and industrial center in the country, as well as one of the most important economic centers in all of Latin America. The capital's economy is based on:

Administratively, the Lima-Metropolitan region is divided into 7 districts (49 districts).

The big and bustling city is famous for its hospitality and the unique friendliness of the locals.

And although Lima is not considered the safest city, every year hundreds of thousands of tourists come to touch the traditions of the indigenous Indians, as well as immerse themselves in the history of colonial times and the Spanish conquerors.

The safest areas of Lima:

The historic center of Lima was declared a UNESCO World Heritage Site in 1988.

Lima climate and weather for today

The climate in Lima is tropical, but with its own characteristics:

The Humboldt Current and tropical latitude have a colossal influence on the formation of the climate in the city.

The most interesting sights of Lima

The city of contrasts has collected in itself a whole palette of colors of various traditions, eras, architectural solutions, which attracts more and more guests, despite the serious problem of pollution and relative safety. 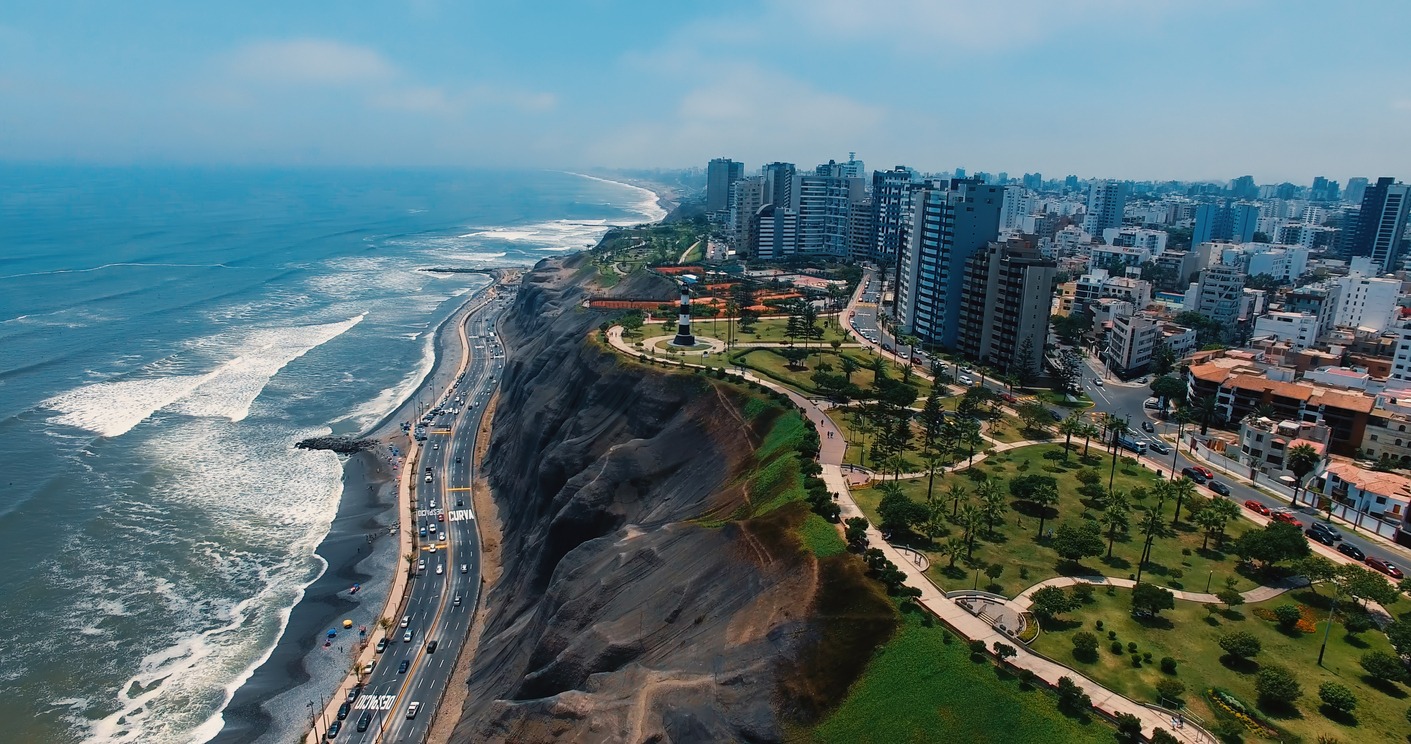 Miraflores is not only the most beautiful and prestigious area for living in the province of Lima, but also the hero city (Ciudad Heroica), which glorifies the thousands who died during the battle for Miraflores in the Second Pacific War with Chile (late 19th century). In memory of this battle, the Parque Reducto №2 park was laid out, on the territory of which the War Museum is located.

Miraflores is an important and very rich shopping area of ​​Lima, a tourist mecca and cultural center. Differs in cleanliness and safety.

Here are the best restaurants in the city, fashion boutiques, cafes, bars, and shopping centers.

The heart of Miraflores is the well-groomed promenade (Malecon), which stretches along high sheer cliffs about 80 meters high. To services of tourists are bicycle paths, parks, paragliding flights and much more.

Huaca Pucllana in Lima is one of the most important ancient monuments of Lima, located in the heart of the Miraflores district, and the most important archaeological complex. In the past, the administrative and ceremonial center of the capital is today a place of power for local residents, as well as a must-see for visitors to the city. It is here, within walking distance, that you can touch the history of Peru and see ancient buildings.

The Huari complex was built in the period from 200 BC until 700 AD and is a large 7-step pyramid of clay platforms. Huaca from Quechua means ‘grave’.

The archaeological complex, in addition to the pyramid itself, includes:

Night illumination of the pyramid offers an amazing panoramic view of the landmark and its surroundings. 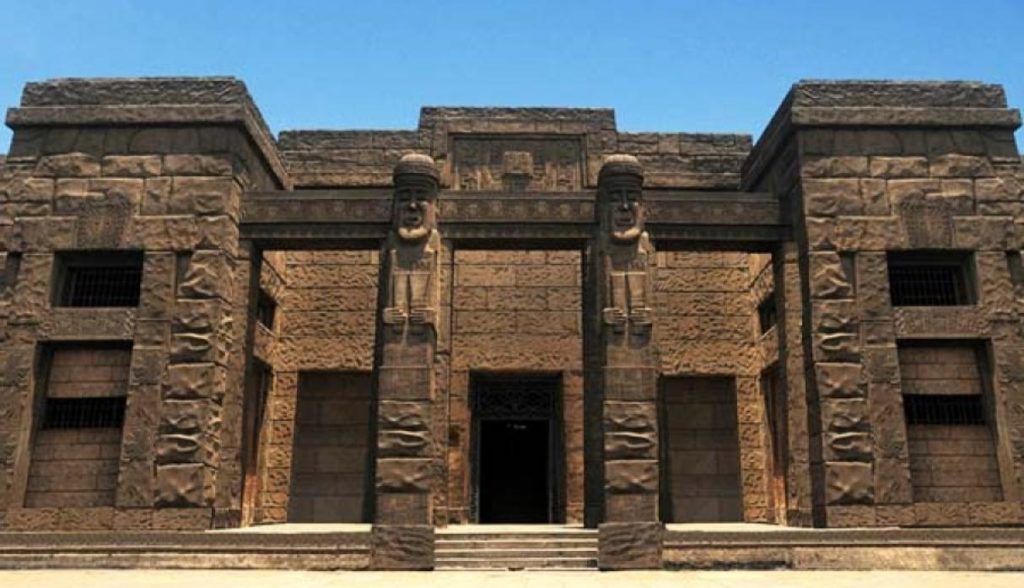 One of the most popular museums among tourists in Lima, the Museum of Peruvian Culture, was founded in March 1946. Its founder was the indigenous Peruvian anthropologist Luis E. Valcarcel. More than 1,500 exhibits are kept in four small rooms, most of which date back to the 20th century. The museum has tremendous national value, highlighting the importance and grandeur of folk art. All exhibits are divided into 4 sections:

The museum building was designed by the talented architect Ricardo De Jax Malakhovsky in the 1920s of XX century.

Today, at the National Museum of Peruvian Culture, you can see:

In addition to exhibition halls, the museum provides premises for storing and restoring artifacts, an archive, as well as a hall for seminars and lectures.

The Ethnographic Museum annually attracts a huge number of tourists with the opportunity to get acquainted with the culture and life of the indigenous people of Peru.

Basilica and Convent of Saint Francis

The Basilica and Convent of Saint Francis are part of the Historic Center of Lima and a UNESCO World Heritage Site (since 1991). The pompous temple complex is a striking example of the Spanish Baroque and consists of the temple, monastery and churches ‘La Soledad’ and ‘El Milagro’. The graceful decoration of the facades, magnificent arcades emphasize the architectural style, and the interior decoration amazes with the luxury of numerous frescoes, a Moorish dome and a rich altar.

In addition, under the walls of the monastery there are ancient catacombs with an ossuary, which served as a burial place until 1808. The remains are stacked in neat geometric shapes. According to scientists, about 25 thousand skeletons rest here.

The monastery church of Iglesia de San Francisco is one of the most visited and revered in Lima.

Torre Tagle Palace is one of the most beautiful and graceful buildings in Lima. Currently, the Palace is the headquarters of the Ministry of Foreign Affairs of Peru. But it is interesting, to a greater extent, for its unique architecture. The building of the early 17th century (1735) was built in the Seville Baroque style with an asymmetrical facade, carved columns and two openwork balconies made of cedar and mahogany.

The palace has 14 rooms, a kitchen, a dining room, a chapel with a luxurious interior in gold, a hall of mirrors.

The palace is closed to the public, but nevertheless it is one of the most popular attractions for tourists. 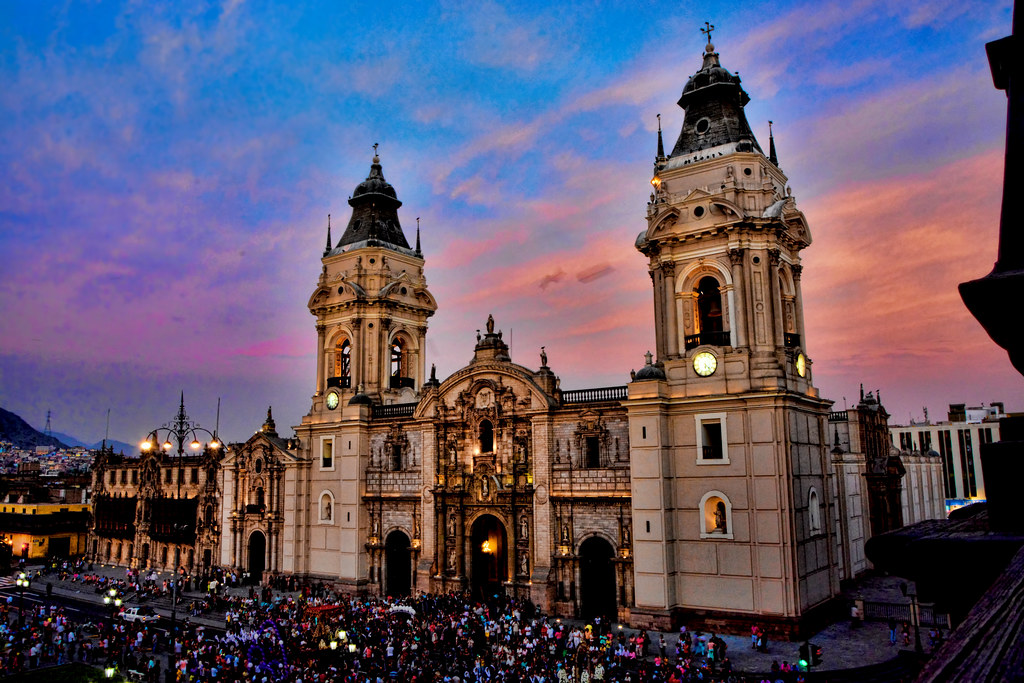 The majestic Lima Cathedral serves as the adornment of the main square of the capital of Peru (Armory).

The construction of the first structure began in 1535. The building of the cathedral, which we can see today, is the third in a row and is made in a mixed architectural style. In the lines and details of modern construction, there are features of the Renaissance Baroque, Gothic, Renaissance, Classicism, etc. This appearance of the cathedral was influenced by long construction and numerous reconstructions, under the guidance of various architects, after the destruction from numerous earthquakes.

Features of the Cathedral of Lima:

The main artifact and attraction of the cathedral is the sarcophagus with the ashes of the founding father of Lima, the Spanish conquistador Francisco Pizarro.

One of the oldest buildings in the city is considered the most popular tourist attraction in Lima.

How to get to Lima: train stations and airports

The main airport of the country, serving both international and domestic flights. Located in the city of Callao, 11 km from the center of the capital. Repeatedly recognized as the best airport in South America. It has 1 terminal with 28 gates, one runway, its own hotel, and a shopping center. The passenger traffic is over 23 million people. The airport is named after the famous aviator Jorge Chavez.

In Lima, at Desamparados station, the Ferrocarril Central Andino railway (535 km long) starts. The world's second highest road connects the seaport and the center of the Cerro de Pasco mining region (ore delivery). In addition, the railway line is used for tourist purposes.

The Desamparados station building is located next to the Government Palace and is used for administrative purposes, offers sightseeing tours and is an exhibition hall.

In 1928 - 1931, the city also had a trolleybus system, which was reconstructed into a tramway, which existed only until the 50s.

A large number of roads in the city have a separate path for cyclists.

In 2011, the first line of the Limskaya metro was opened. Initially, a 21-kilometer route with 16 stations was put into operation. The Lima metro currently consists of one overhead (flyover) line with a length of 35 km (26 stations), which connects the northeast of the capital with the southern part of the city. The immediate plans include the construction of four more lines and three for the long term.

The metro line of the capital of Peru is the longest in the Americas, and until 2017 it was also the longest metro viaduct in the world.

The metro route runs away from tourist sites and the city center, so this is not the most convenient option for city visitors. 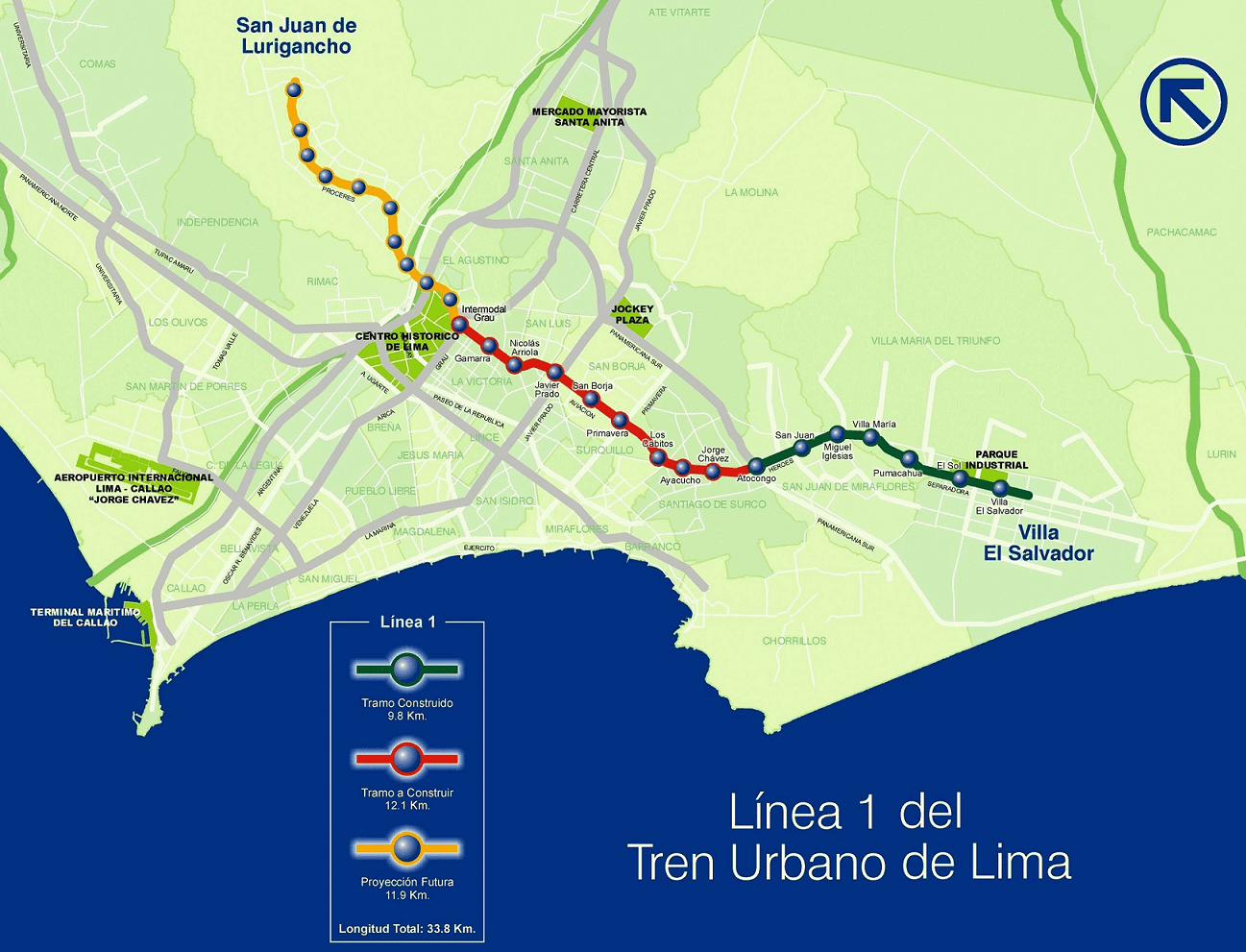 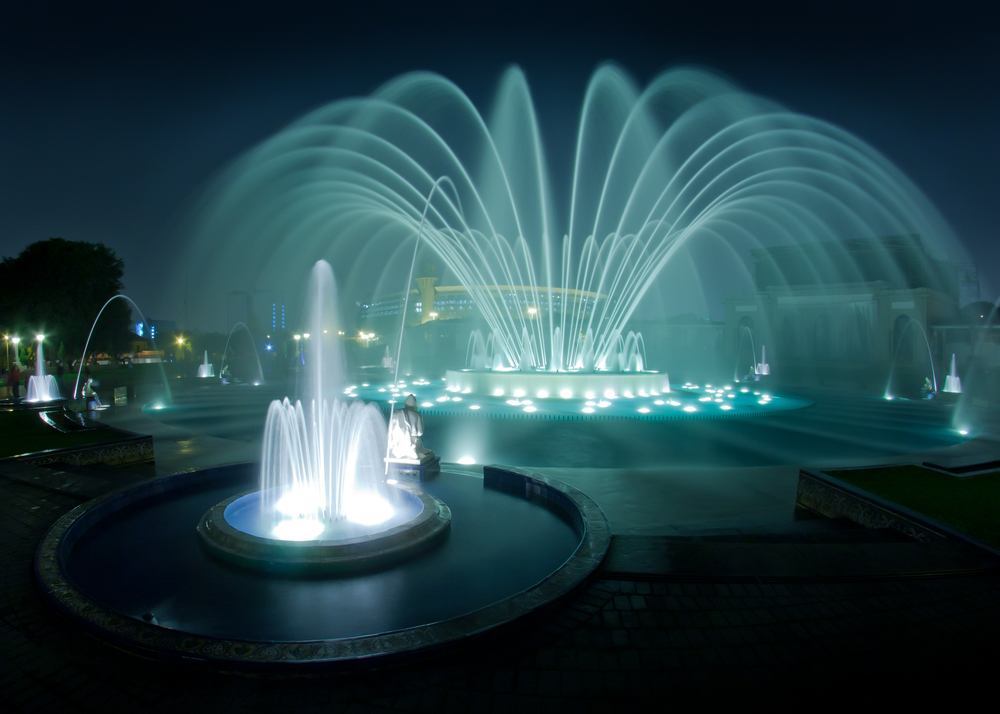 Parque de la Reserva is one of the main attractions, located in the heart of the capital city of Lima, covering an area of ​​8 hectares. The park complex was built in 1929 in the neoclassical style by the design of the French architect Claude Sahut. The park became a symbol of memory of the soldiers who fought in the battles of San Juan and Miraflores during the Pacific War.

In 2006, the active restoration of the park began, which gave it a second life. And today Parc de la Reserva is a world record holder and is listed in the Guinness Book of Records as the largest park complex of fountains in the world. The large-scale project El Circuito Magico del Agua combines 13 different fountains, most of which are interactive and illuminated at night.

The largest fountain in the reserve is the "Magic Fountain" (Fuente Mágica), the height of the jet reaches 80 m. Each of the fountains deserves attention, but the most grandiose impression is made by the dancing fountain ‘Fantasy’ tunnel with laser show.

Every year, the fountain park attracts a huge number of tourists, and is also a favorite vacation spot for local residents.