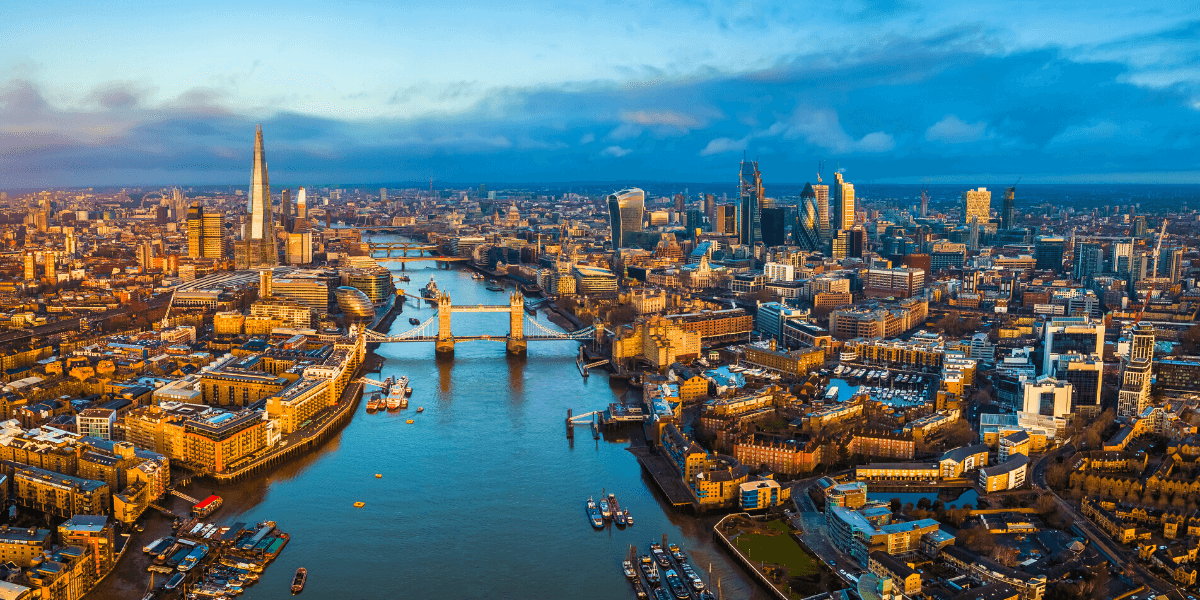 London is the largest city (1572 km²) and capital of the United Kingdom of Great Britain and Northern Ireland. Also, it is third largest city in Europe with a population of 5667 people / km². The metropolis is located at the Thames estuary in the southeast of the island of Great Britain. The economic, cultural and political center of the country is inhabited by a little less than 9 million people. London was founded in 43 AD, since 100 AD it became the capital of Roman Britain. From 1825 to 1925 it was recognized as the largest city in the world.

London is one of the centers of world tourism and the most visited cities in the world. The capital of Great Britain is visited by about 20 million people annually.

The mild maritime climate is a feature of London. The temperate maritime climate directly depends on active winds from the Atlantic, which bring balance to the weather: in summer they bring coolness, and in winter they make it warmer. Hence the uniqueness of London weather: a small amplitude of off-season changes. A delicate winter with average temperatures of + 5 ... + 7 degrees and rare snowfalls, after which snow lasts only a few days. Quite cool summers with an average temperature of +22. London is famous for its rainfall, although an average of 200 days without rain can be expected per year.

The tourist season is from May to September, as well as the Christmas holidays. There is no complete lull in London as in all other major tourist centers. But during the period from October to mid-December and from February to mid-April there are significantly fewer tourists.

The most interesting sights of London

London is a multicultural and cosmopolitan city, mixing a wide variety of cultures, nationalities, religions and political views. Within one city, you can plunge into the atmosphere of a dozen countries around the world. It harmoniously combines the most modern trends and values ​​of past centuries. 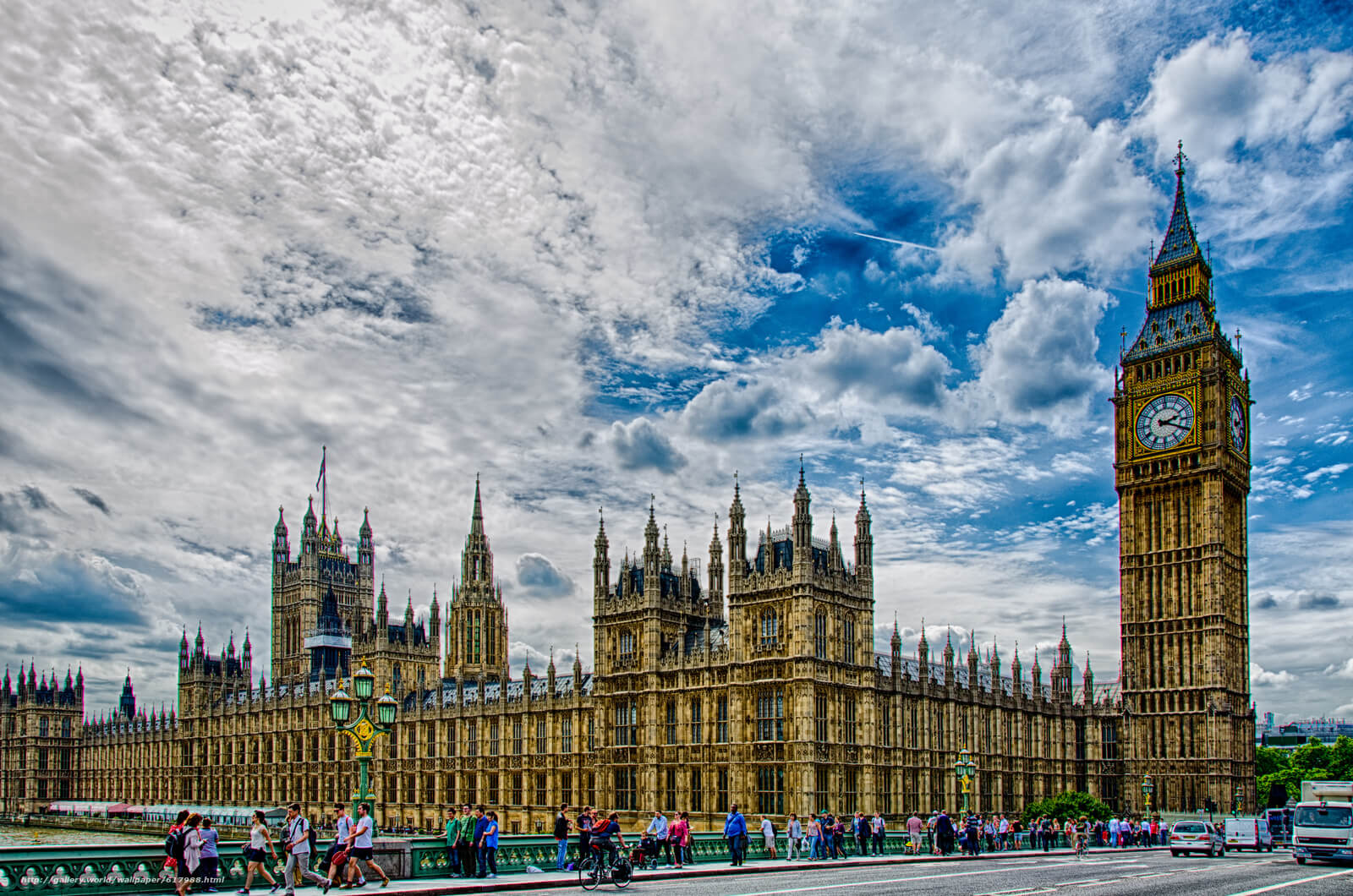 Palace of Westminster is the heart of London and one of the main symbols of the capital. Until 1529, the palace was the capital residence of the English kings. Today, meetings of the British Parliament are taking place in a beautiful building on the banks of the Thames in the Westminster area. The Westminster Reception Hall, ancient treasury the Tower of Jewels, as well as the chapels of St. Stephen and St. Mary of Andercroft have survived to this day. The Palace of Westminster has: three towers (the tallest tower Victoria is 98.5 m), 1100 rooms, 100 stairs and 5 kilometers of corridors. In 1987, the palace was included in the UNESCO World Heritage List. More than 30 thousand people visit the famous landmark every year. British citizens, in consultation with members of parliament, can enter the parliament building, while foreign tourists can only get inside with an organized excursion during the summer parliamentary holidays. 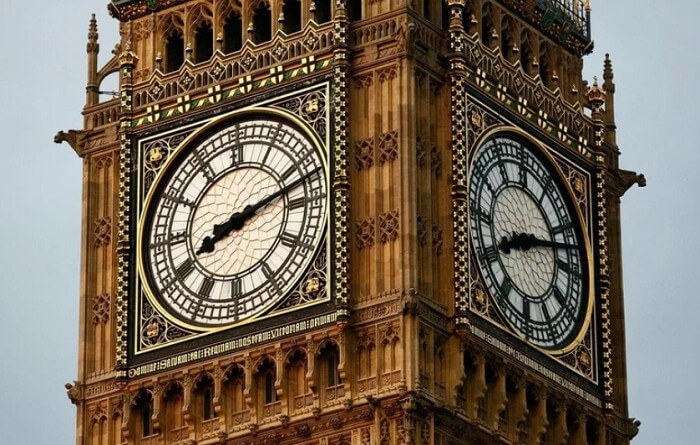 Big Ben is another hallmark of the capital of Great Britain. Big Ben is the largest of the six bells in Westminster Palace. It was once the heaviest (13.7 tons) and largest bell in the entire United Kingdom, the sound of which is known throughout the world as the BBC callsign. The clock tower of the Palace of Westminster is already customarily named after him. Since 2012, the tower has been officially called the Elizabeth Tower, but everyone knows it as Big Ben. The neo-Gothic tower was erected in 1859; its height with a spire is 96 meters. There are 334 steps to overcome. The tower is closed for public visits. The unique clock on the tower is the international time standard, and the third in the world in size: the diameter of the dial is 7 meters, the length of the hands is 2.7 and 4.2 meters, and the movement weighs 5 tons.

Buckingham Palace and the Changing of the Guard 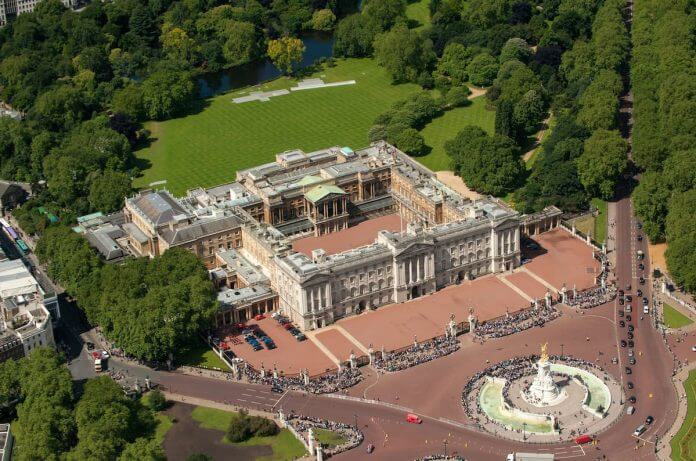 Buckingham Palace is the official London residence of Queen Elizabeth II of Great Britain and the largest royal palace in the world.

The luxurious residence of Queen is considered the most valuable in the world. Buckingham Palace has 775 rooms, 52 bedrooms for members of the royal family and their guests, 188 bedrooms for staff, 78 bathrooms, 92 offices, 19 state rooms, including the dining room, throne and music rooms. The most spacious and richly decorated room of the palace is the ballroom (length 36 meters, width 18 meters). In summer, the palace is visited by about 50,000 guests.

Behind the palace is a large 42-acre (17 ha) private park with 2.5 miles of gravel paths. The Buckingham Palace garden with a large artificial lake is included in the English Register of Historic Parks and Gardens, Grade II. 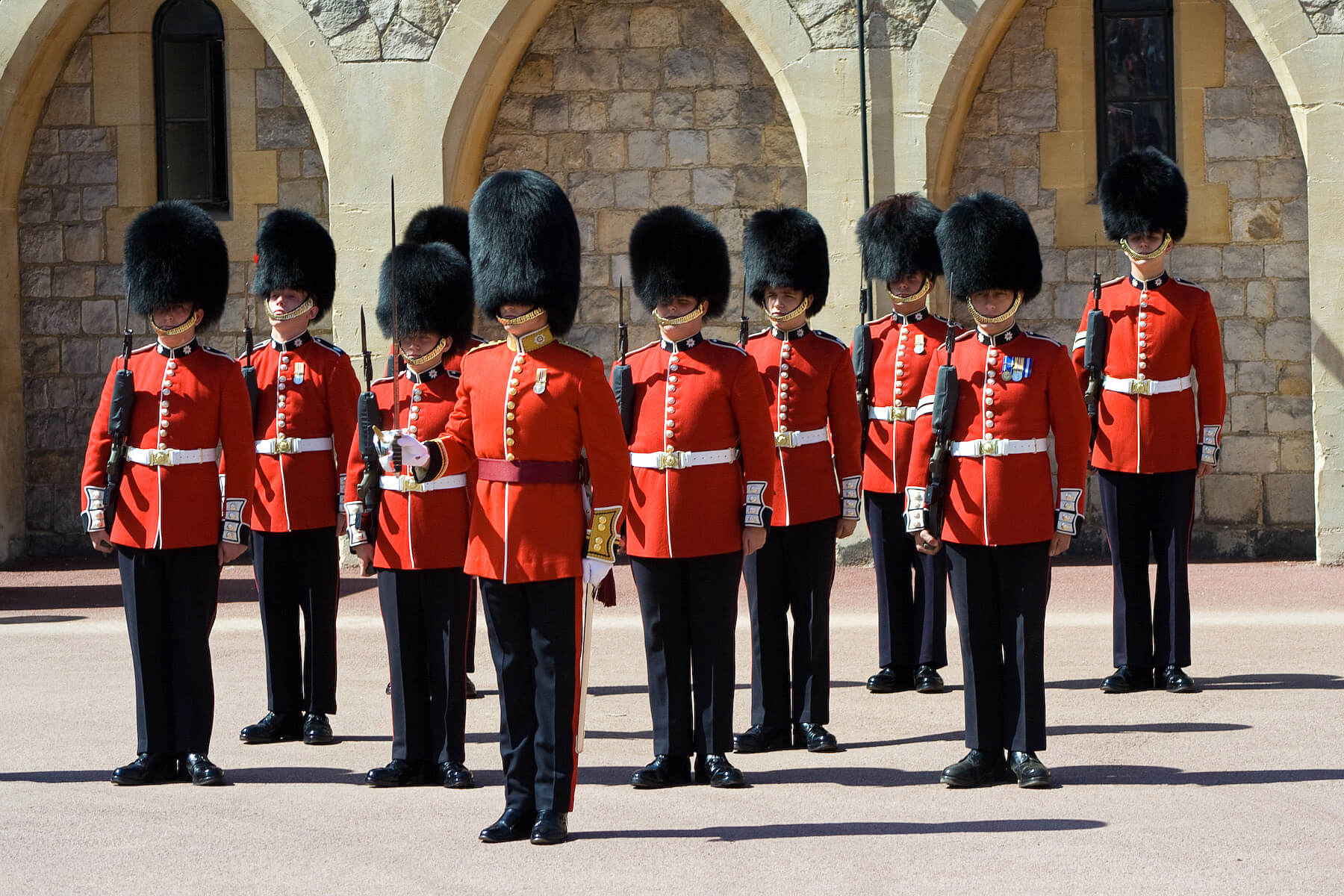 The palace is guarded by the Court Division, consisting of the Guards Infantry Regiment and the Royal Horse Guards Regiment. In the morning, a colorful changing of the guard takes place on the square in front of the palace. It is one of the most beautiful and famous ceremonies in London. The centuries-old tradition has its roots in 1660. Held daily. Duration 45 minutes.

The Tower of London and Tower Bridge 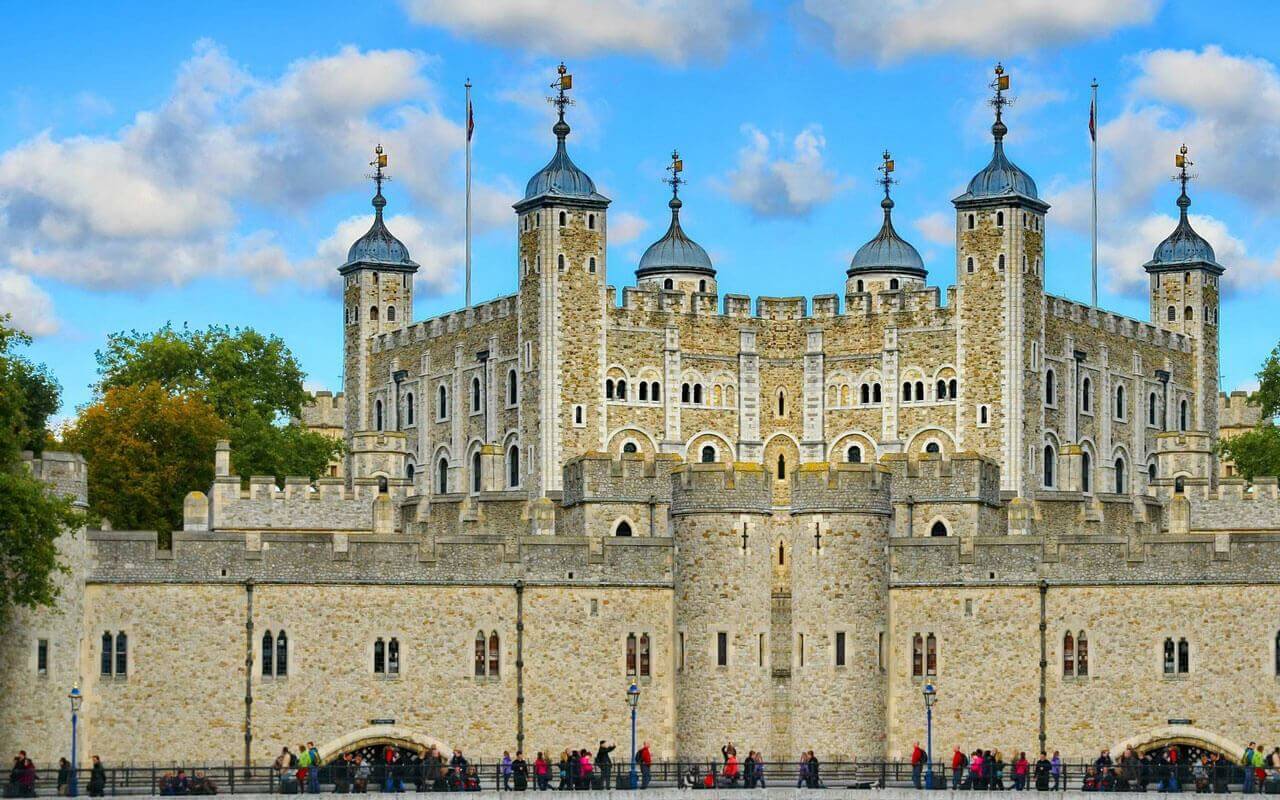 The Tower is a fortress on the north bank of the Thames in the historic center of London, one of the oldest buildings in England and one of the symbols of Great Britain. Once one of the most impregnable fortresses in Europe has changed many forms, during its rich almost 1000-year history. It was the residence of kings (for 900 years), and a prison, and a mint, and an observatory, and a zoo. A quadrangular structure measuring 32 x 36 meters, about 30 meters high, made of stone and lime mortar. The gloomy look of the fortress is complemented by black ravens, the traditional inhabitants of the Tower. By decree of King Charles (XVII century), 6 black ravens (and one spare) were to be permanently located in the castle, each of which has its own name. Ravens are the famous symbol of the castle and are carefully guarded. The Tower was always guarded by specially trained guards, as an indispensable attribute of royal power. The later buildings house the Royal Treasury, which keeps collections of crowns, scepters, orders, monetary exhibits and many other jewels of the British Empire, including the world's largest cut diamond and the Black Prince ruby. The historical monument-museum is under the protection of UNESCO. 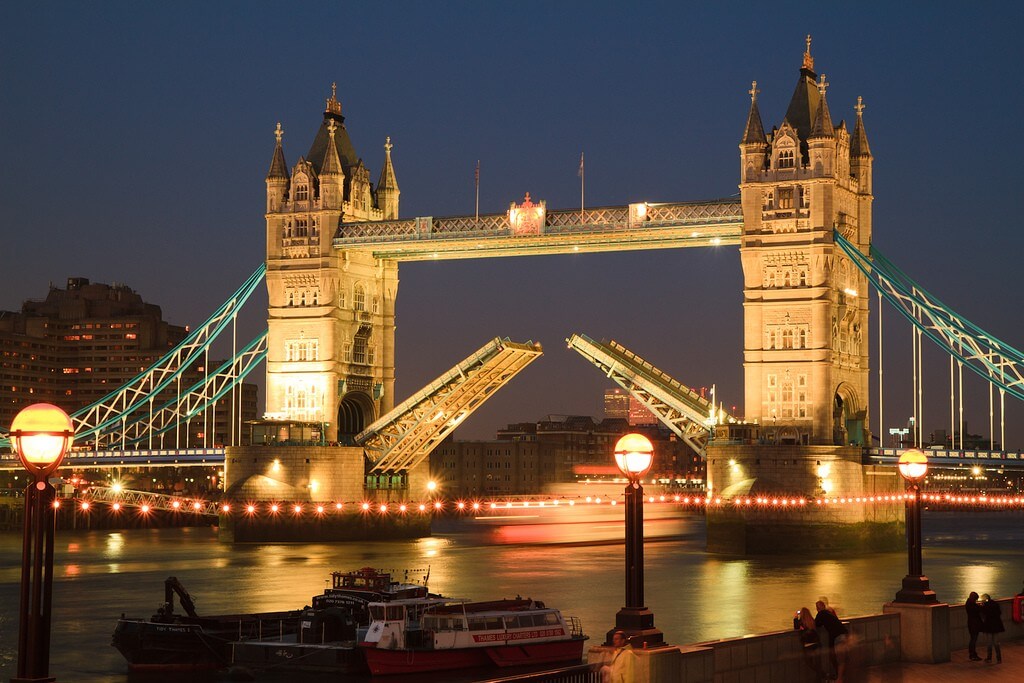 Tower Bridge shares primacy with Big Ben among London's top attractions. This is a two-level combined (suspension and drawbridge) bridge over the Thames, opened in 1894. The bridge is 244 meters long. The towers are connected at the upper level by two horizontal passages and stand on intermediate supports in the Victorian Gothic style (height 65 meters). The central span between the towers is 61 meters long. An excellent view of the capital opens up from the upper gallery of the bridge. Every day, a huge stream of cars passes through one of the most beautiful bridges in the world and many residents and visitors of London pass on foot. The City of London Corporation imposed transport restrictions to preserve the integrity of the historic structure: speed - up to 20 miles per hour (32 km / h); weight - less than 18 tons. 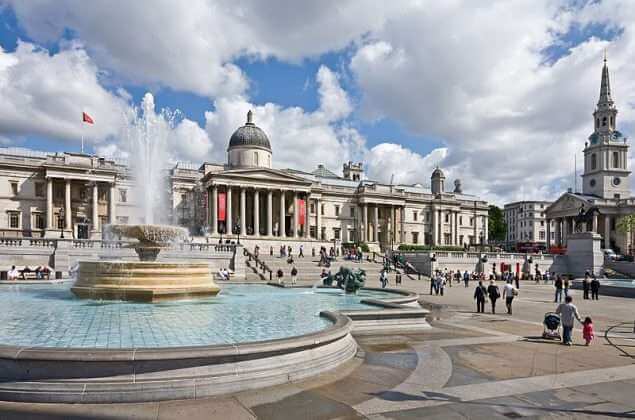 London National Gallery is one of the most famous museums in London and the third most visited museum in the world. Opened in 1839. The 46 396 m² gallery contains 2500 paintings from different eras. The paintings are displayed in chronological order. About 6.5 million people visit the gallery annually. It offers visitors a full-fledged recreation area with an espresso bar and a cafe. 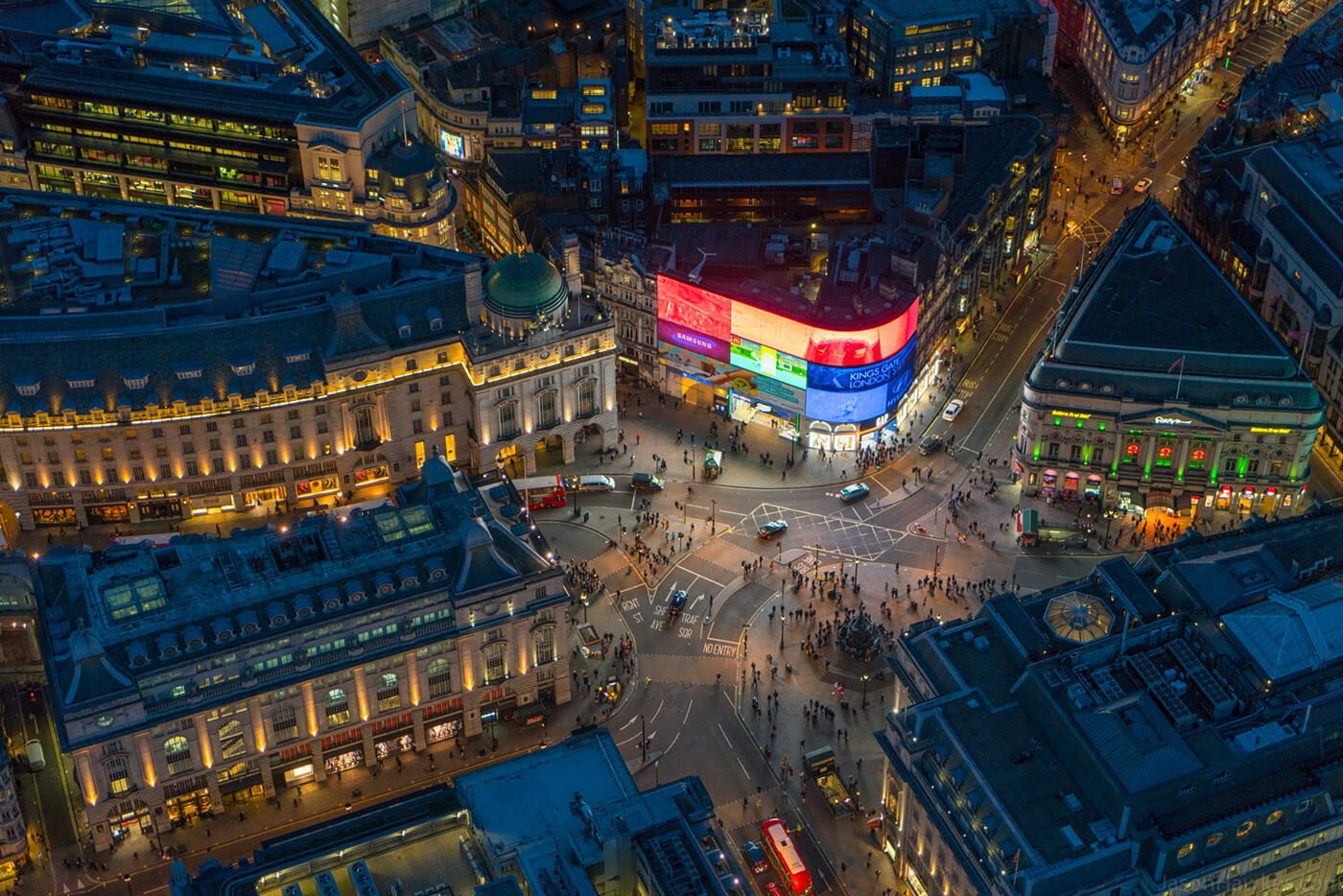 Piccadilly Circus is an ancient (1819) square and major traffic intersection in central London. “Circus” means “circle” is a very common designation of roundabouts in England. The square is very lively, life is always in full swing on it. This is an iconic place at the turn of the eras: huge neon signs, modern entertainment and shopping centers coexist with famous Victorian buildings, Shaftesbury Fountain and theaters. Piccadilly Circus is full of attractions that certainly deserve attention. Theatergoers will love a visit to an underground theater with a 600-seat auditorium, the Criterion Theater (1874). The fountain crowned with the statue of Antieross is a memorial to Lord Shaftesbury's charitable work. 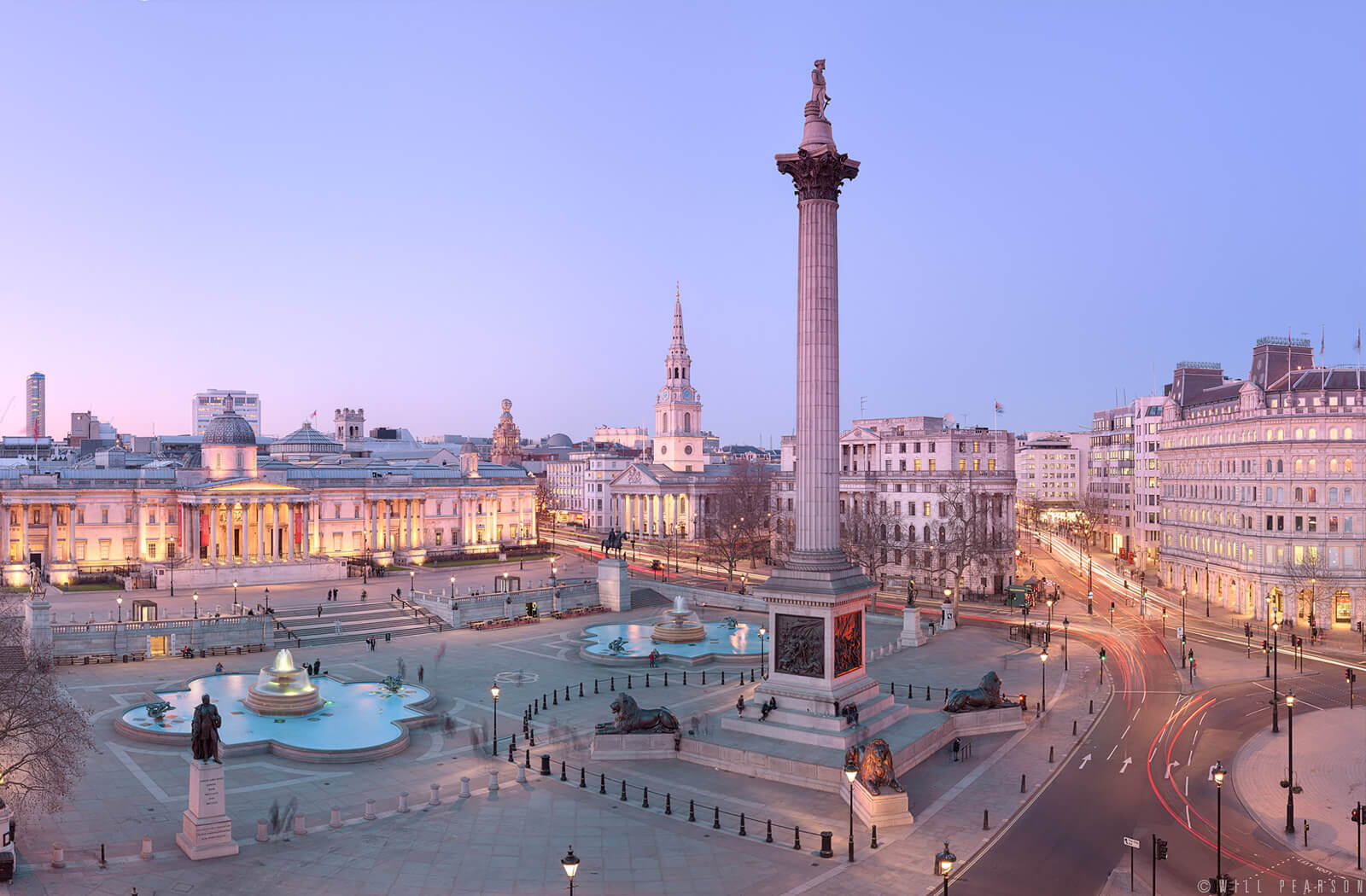 Trafalgar Square (approx. 12,000 m²) is an important traffic intersection appeared at the beginning of the 20th century at the intersection of the largest streets of Westminster and became the geographical center and heart of London. In the place where holidays, festivals and life are raging today, the royal stables were once located. In the center of the square rises a 50-meter column of dark gray granite, erected in honor of Admiral Nelson. Nearby there is a monument to Charles I, sitting on a horse. This is where Kilometer Zero is located, the starting point for all UK road distances.

Tourists rush to the square for the National and Portrait Galleries, wonderful fountains and magnificent exhibitions of London artists.

Until recently, the pigeons fed by the visitors were a special attraction. At the same time, up to 35 thousand birds could be on the territory of the square. But the droppings of such a number of birds began to damage the masonry and monuments, so there was a ban on feeding pigeons, and now there are almost no birds left on the square.

How to get to London: train stations and airports

London is a major transport hub and the main air gateway to Great Britain. Today the capital is served by 6 airports, 5 of which are the main ones: 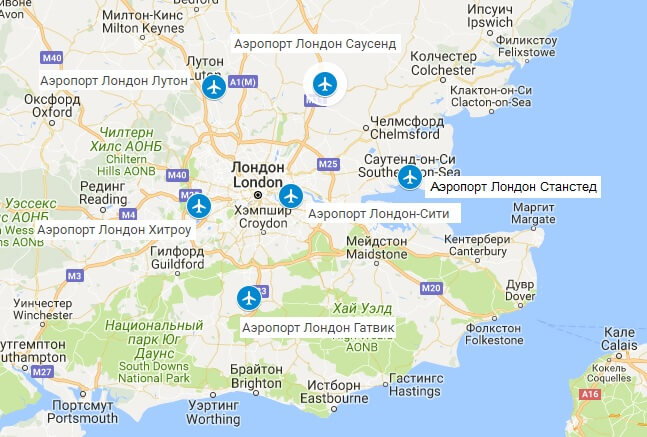 London is the center of England's rail network. There are 13 main stations for passengers.

The two main modes of transport used by most Londoners are:

The London Underground is one of the symbols of the city. The first line of the Metropolitan Railway was opened in 1863. Its length was 6 km and it connected two railway stations. At the time of the opening, the average passenger traffic per day was 26 thousand people. Londoners themselves informally call the underground in their city "The Tube" ("tube" - pipe). 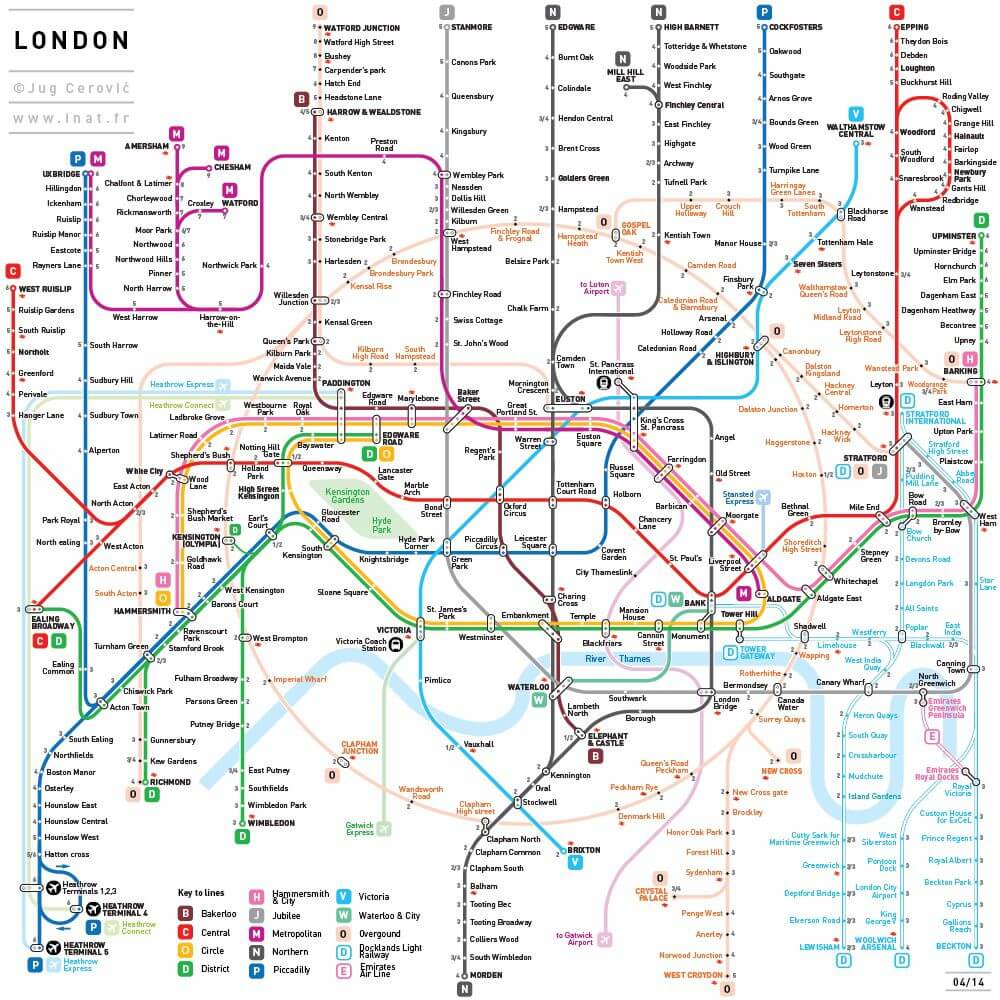 Buses, trams and other types of transport

The London Bus is London's transport system with about 1,000 passenger routes. For half a century of service (1954-2005), the red two-story "Rutmaster" has become a symbol of the whole of Great Britain. Today the old Rootmasters have survived only on Cultural Heritage Route # 15 (Tower Hill - Trafalgar Square). There are dedicated open-top touring buses in central London providing fresh air and better views.

River trams are a network of regular river traffic and allow avoiding numerous traffic jams on the roads of the capital. There are 5 regular routes.

The Emirates Aerial Tramway over the Thames attracts tourists with a bird's eye view of the capital's sights. Funiculars start from the Greenwich Peninsula and land at the Royal Docks.

Visitors to the city do not miss the opportunity to ride a London taxi - the iconic black cab. 750 bicycle stations and 11,000 bicycles are provided for those who like to combine business with fitness. 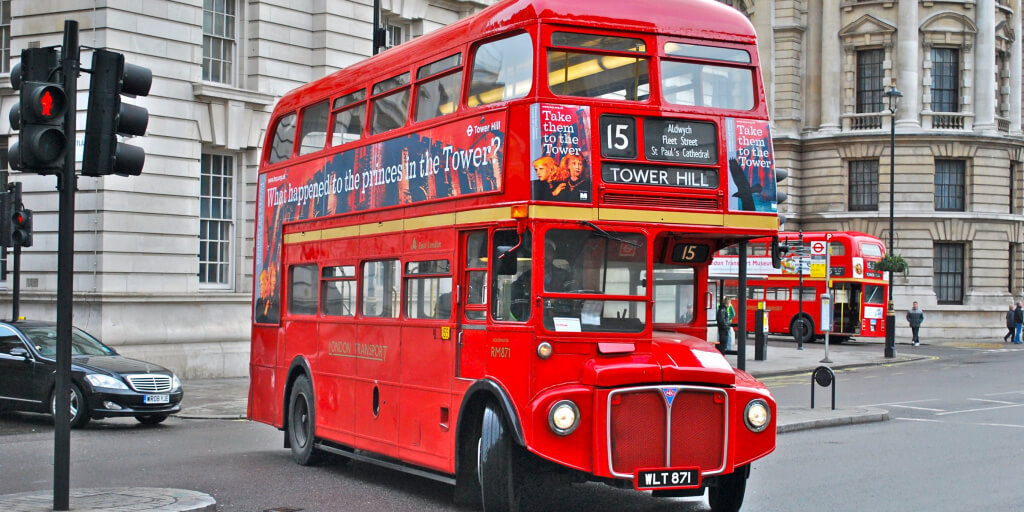 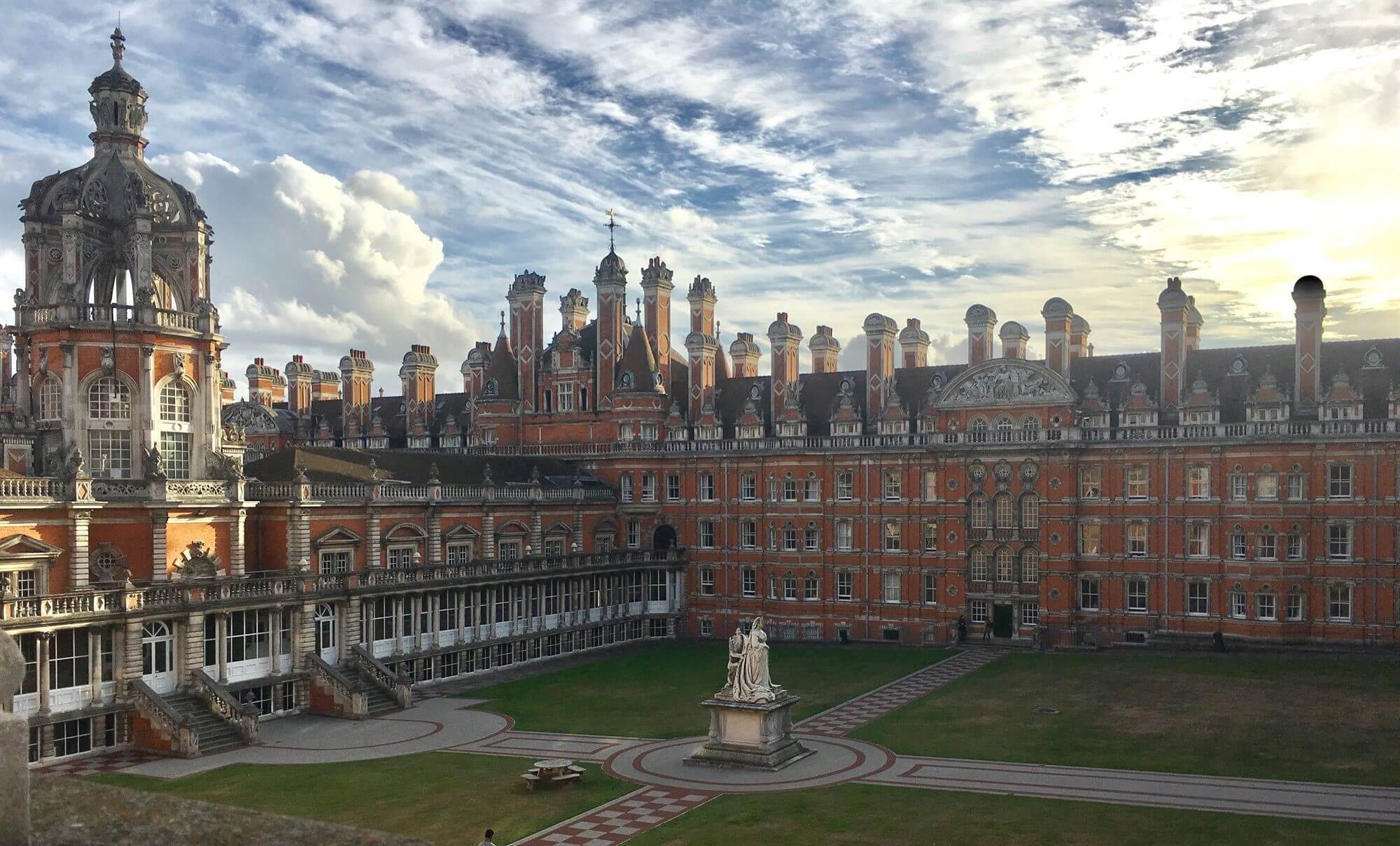 The University of London is one of the oldest and largest universities in England. This collegiate research institution of higher education was founded by a royal charter in 1836 and is considered one of the most powerful in the world. Being high-level specialists, university graduates are in great demand among employers around the world. And numerous discoveries in engineering, physics, biology and medicine have glorified the university as a high-ranking research center.

The University is located in the heart of London, in the Bloomsbury area with an abundance of parks, squares and Gregorian buildings. The University of London occupies 160 buildings (most of them are architectural monuments), where several student residences and a large library are located. The campus of the university is considered one of the most beautiful campuses in the world.

The University of London has a complex structure that includes 18 colleges and 11 institutes, it includes such educational institutions as: