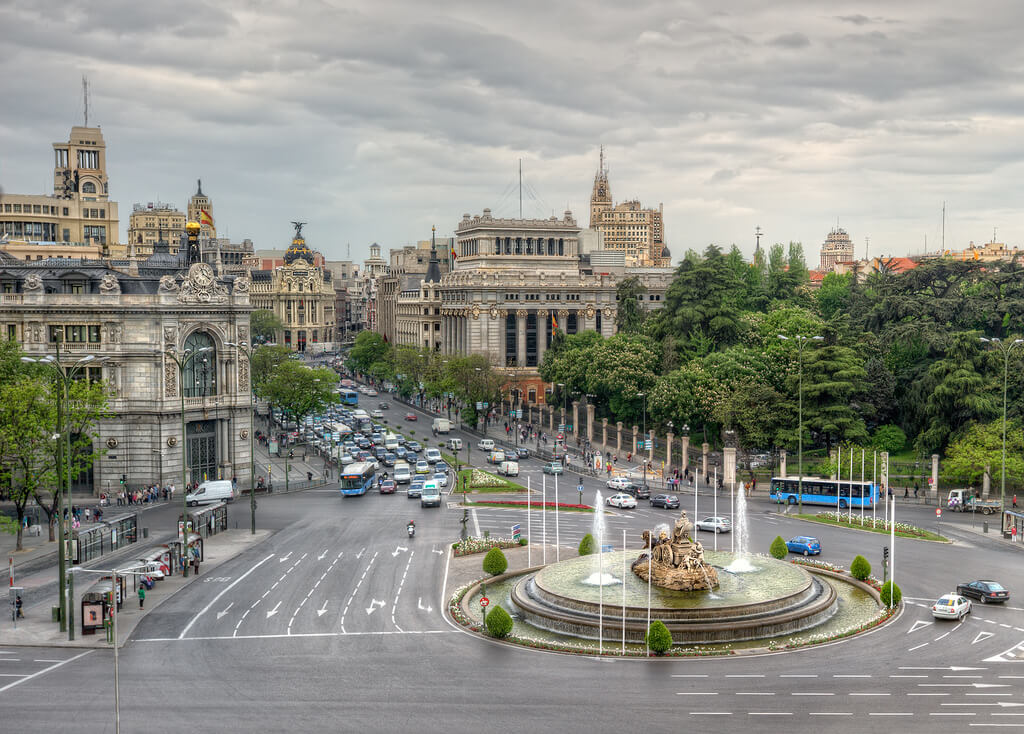 Madrid is the capital and largest city of Spain with a population of about 3.3 million inhabitants. The economic, political and cultural center of the country is located in the central part of the Iberian Peninsula at the foot of the Sierra de Guadarrama mountain range (at an altitude of 667 meters above sea level). It's covers an area of ​​607 km2. The population density is 5380 people / km².

The first documentary evidence of Madrid dates back to 852, when a fortress was founded on the banks of the Manzanares River by Muhammad I.

Today Madrid is a beautiful modern metropolis, which always has something to surprise it's guests and please it's residents. 7.6 million tourists visited the capital in 2019, setting another record.

Madrid is one of the sunniest cities in Europe. Its climate belongs to the continental climatic zone. The city is ranked 4th in the ranking of the hottest European capitals. Due to the dry climate and little rainfall throughout the year, summer is hot here (average temperature is about + 22 ... + 27 ° С), but winters are quite cold (about + 2 ... + 4 ° С). About 400-450 mm of precipitation falls annually: much more in winter than in summer (sometimes winters are especially snowy).

The warmest month of the year is July and the coldest month is January.

The tourist season starts in March, reaching its peak by May-June. But many tourists consider the velvet season (September-October) an ideal time to relax. Good weather almost all year round, making Madrid one of the most popular cities in the world for tourists.

The capital of Spain is deservedly recognized as one of the most beautiful cities in the world. Combining the city of modernity and the Middle Ages, Madrid attracts numerous tourists. This city has given the world a lot of monuments, historical buildings and beautiful parks. 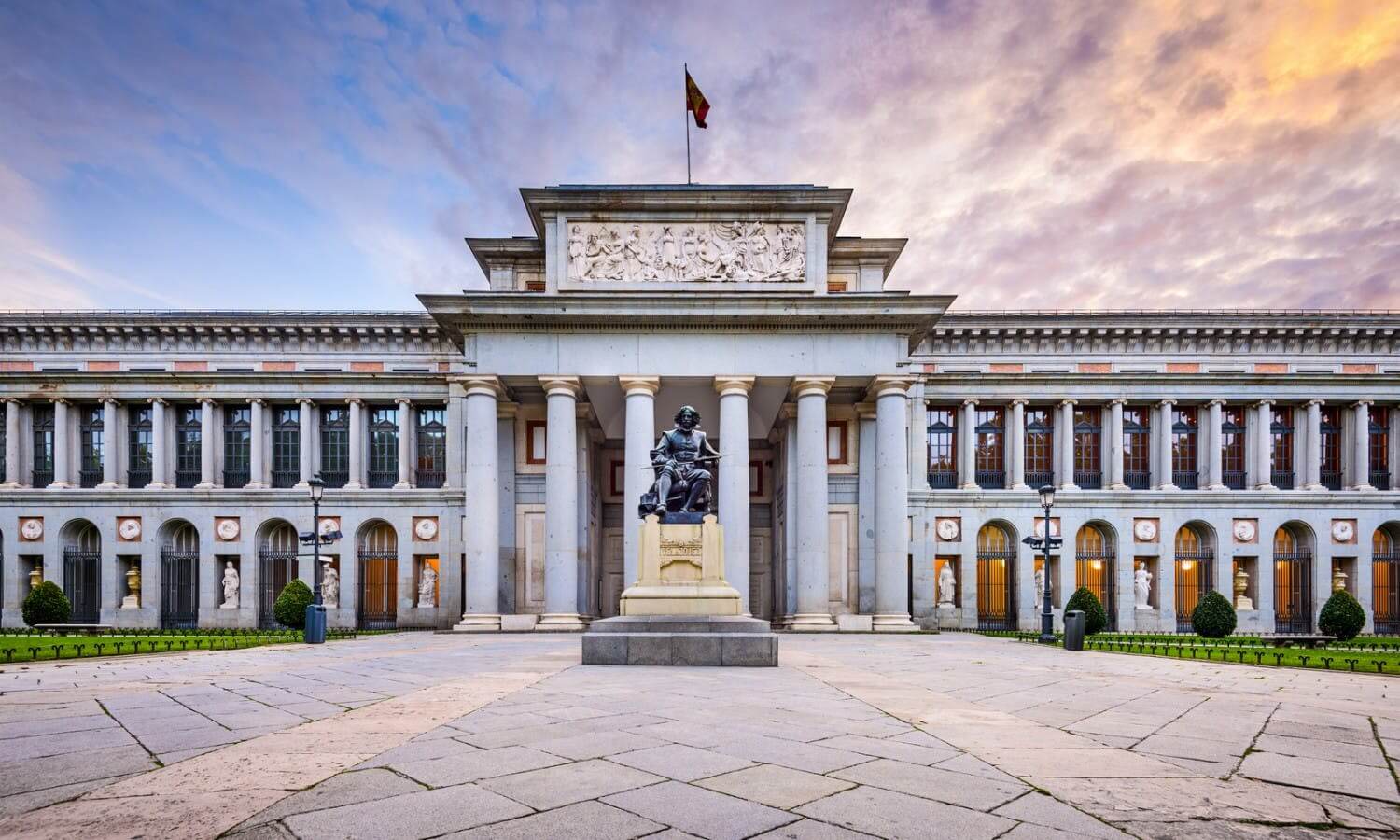 The museum, founded by Ferdinand VII in 1819, is one of the most prestigious art galleries in the world. Connoisseurs of painting will discover a unique collection of paintings dating back to the 12th century. The total area is 53 m², on which 1300 paintings are exhibited (about 7000 canvases are kept in the museum's storerooms). The most famous Prado paintings in Madrid are "Portrait of the Cardinal" by Rafael Santi, "Three Graces" by Rubens, "Triumph of Death" by Bruegel the Elder, "A Carriage of Hay" by Bosch, "Knight with a Hand on His Chest" by El Greco.

Included in the top twenty most visited museums in the world. About 3.5 million people visit the Prado every year. 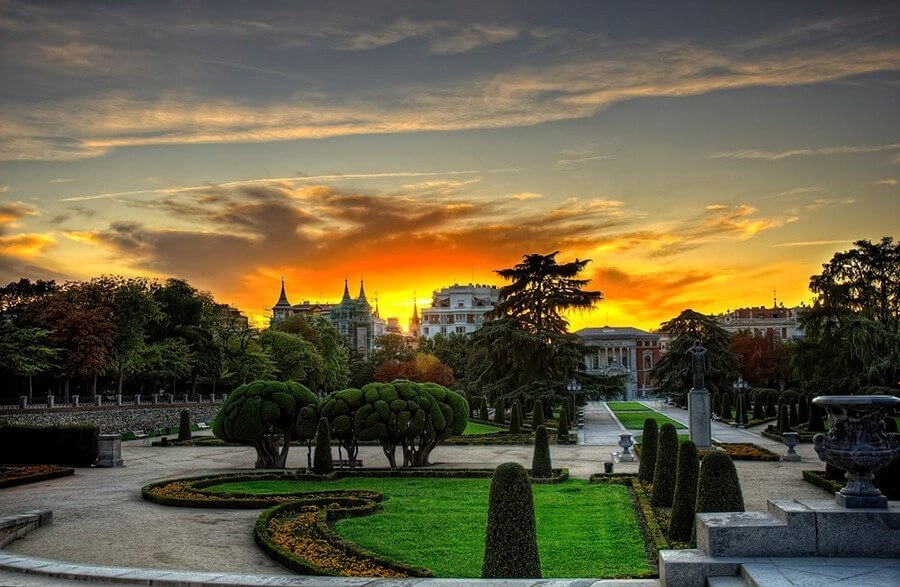 Buen Retiro Park is one of the largest parks in the Spanish capital. It was created in 1630, and is a popular Sunday getaway for Madrid residents and a city landmark.

The area of ​​the park is 120 hectares in the old center of Madrid, where a large number of unique attractions are concentrated (the Fallen Angel, Artichoke and Galapagos fountains, the Rose Garden, the Royal Astronomical Observatory is one of the oldest research institutions in the world and many others ). The park is decorated with a small lake with an area of ​​3.7 hectares with a monument to King Alfonso XII. In 1887, two palaces were erected for international exhibitions. A brick and a crystal one. More than 19 thousand trees of 167 species have been planted in the park, including 6 species that are included in the list of unique trees in Madrid.

In 1935, the Retiro Park was declared an artistic and historical heritage.

The Royal Palace is the official residence of the kings of Spain for 200 years. It is located in the western part of the capital on a small hill on the banks of the Manzanares River. The construction of the palace lasted 26 years (from 1738 to 1764) during the reign of Charles III. Today it is the largest palace and park complex in Europe: 135,000 m², 3418 rooms with rich and refined interiors from the best Italian and Spanish craftsmen. Today, no one lives in the palace, but sometimes ceremonies and festive events are held here.

The park is surrounded by two picturesque parks: Sabatini Park and Campo del Moro Park. One of the attractions of the palace is the Armory, which houses one of the largest collections of armor and weapons in the world. More than 1 million tourists visit the complex annually.

One of the most famous sights is the central square of the Spanish capital Puerta del Sol (translated from Spanish means "Gate of the Sun"). This beautiful oval-shaped square is surrounded by buildings from the 18th century and forms the intersection of 8 streets. A bronze plate is mounted on the sidewalk of the square. It's the zero kilometer (the central point of Madrid, which is the geographical center of the country), from which all road distances in Spain are counted.

The main square of Madrid is always lively. A large number of attractions attract tourists from all over the world, in addition, the square is one of the main centers of public transport in the city. It was here that the first car in Madrid drove, and here in 1919 the first metro line was opened.

The Post Office is the oldest building in the classic French style, the tower of which is decorated with an ancient clock that notifies the whole country with its striking about the beginning of the New Year. 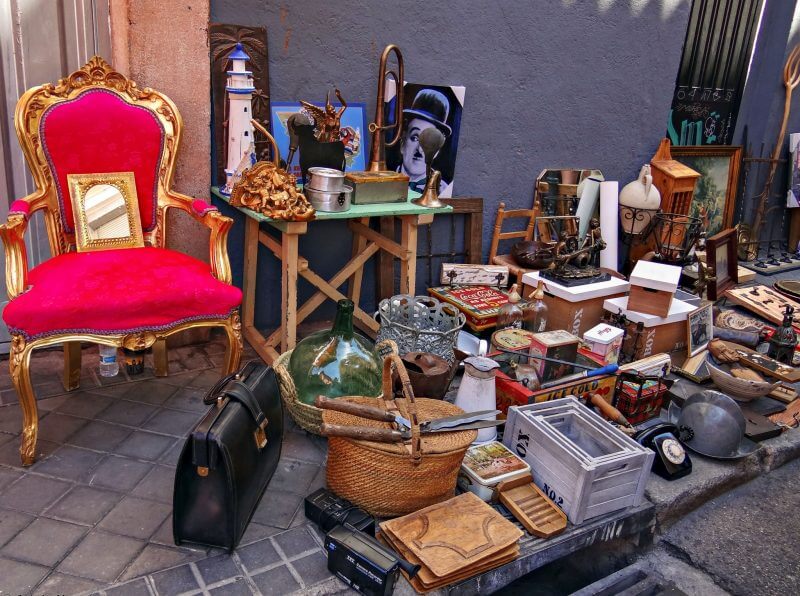 El Rastro is the most popular, largest and oldest open-air flea market in Spain. Located in the old La Latina quarter near the Manzanares River. This is the largest flea market in Europe, known since the 16th century, where you can buy almost everything: from exclusive antiques to small souvenirs. A unique theatrical atmosphere has been created here, saturated with national flavor, music, bustle of the bazaar. El Rastro occupies several squares at once, the main of which is Plaza de Cascorro with a monument to the pilot Eloy Gonzalo. 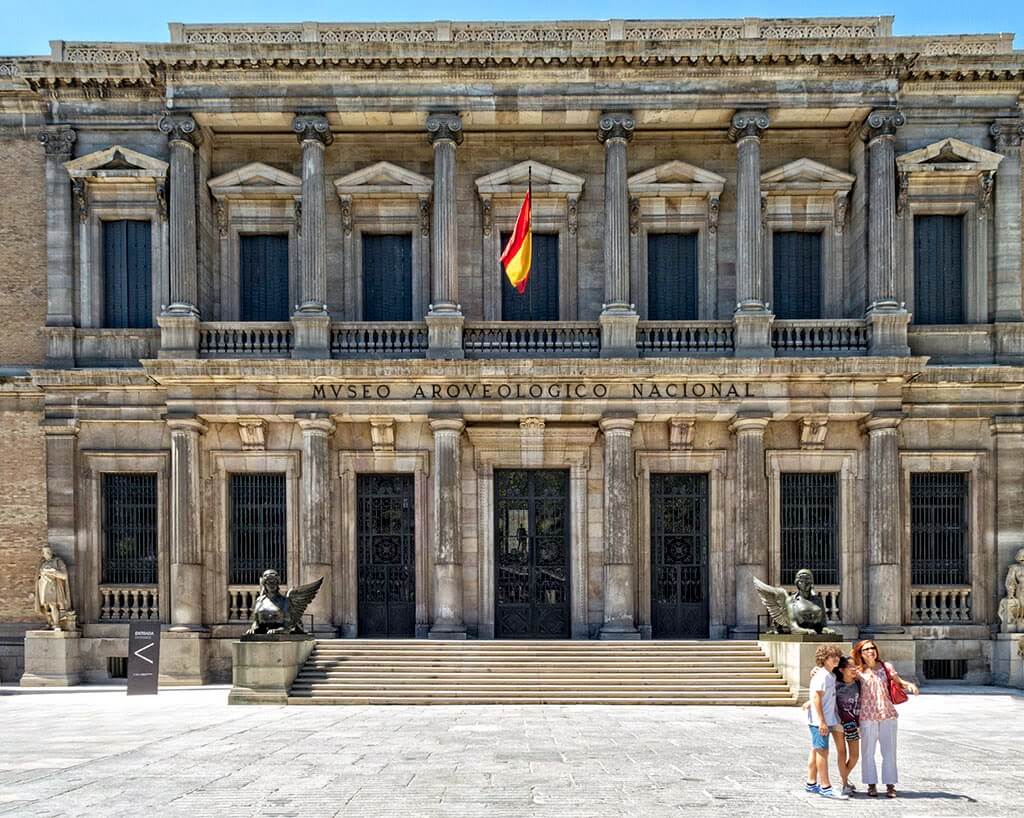 The National Archaeological Museum of Madrid was founded in 1867 to store ethnographic and archaeological finds, decorative arts and a numismatic collection. Here you can see archaeological finds from the Roman era, the times of the Arab conquest, as well as the Renaissance and the Neolithic period. The museum is housed in the Palace of Libraries and Museums on Calle Serrano next to Plaza Columbus and adjacent to the National Library. This is a large three-storey building with a mezzanine, which houses the richest exhibition of ancient coins.

This is one of the best museums in Spain, which has collected many antiquities. In the garden, you can see the Altamira cave, recreated with the smallest details, with unique rock paintings.

All air traffic in Madrid passes through two international airports: 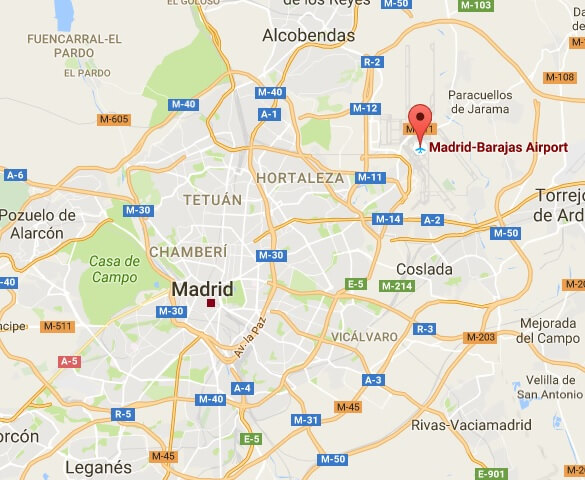 Public transport in Madrid is represented by metro, high-speed trams, buses, trains, funicular. The city's transport system consists of 8 zones, 6 of which relate directly to Madrid.

This is the first metro in the world to have two circular lines and the only one in the world in which they are not nested into each other: one connects the central districts and radial lines, the second serves satellite cities.

Some stations are of interest as tourist sites. At the "Engine Station" various power units are presented, with the help of which subway trains move. The Chambery station is closed and since 2008 is presented as a museum, where excursions are held. At Karpetan (the operating station), small areas have been set aside for interesting exhibits (thousands of fossils were discovered during the reconstruction of the station).

The deepest station is "Kuatro Kaminos" with a depth of 49 m. Passenger traffic is about 2.5 million people per day.

In the spring of 2007, three lines of the so-called light metro (Madrid tram) began to operate. 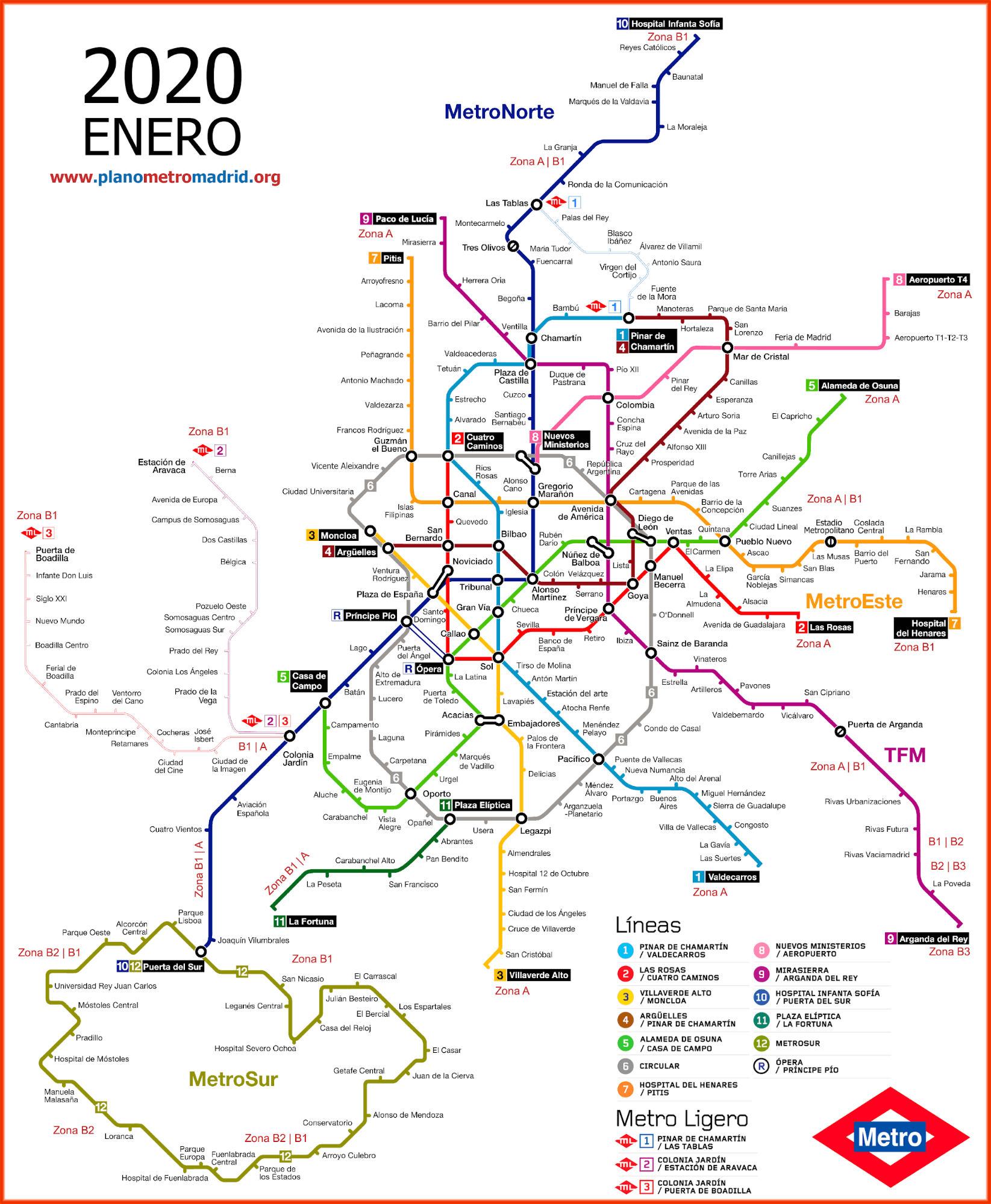 Madrid is the birthplace of the legendary Real Madrid football club. The club was founded in 1902. It is one of the most important and magnificent sports associations in the world. In 2000, Real Madrid was recognized by FIFA as the best football club of the 20th century.

The Chamartín Stadium was a multipurpose stadium in Madrid with a capacity of 22,500 people. It was originally used as a stadium for Real Madrid's matches before the opening of the Santiago Bernabeu Stadium. It was built in 1924, and closed in 1947.

The stadium "Santiago Bernabéu" (Spanish Estadio Santiago Bernabéu) is today the home arena of the football club "Real Madrid", and sometimes it hosts the matches of the Spanish national team.

The 6,000-seat Alfredo di Stefano football stadium in Madrid is the home arena of Real Madrid Castilla, and was built in 2006. Named after the former President of Castilla and the former player of the team who became the best footballer in the history of the club, Alfredo Di Stefano.