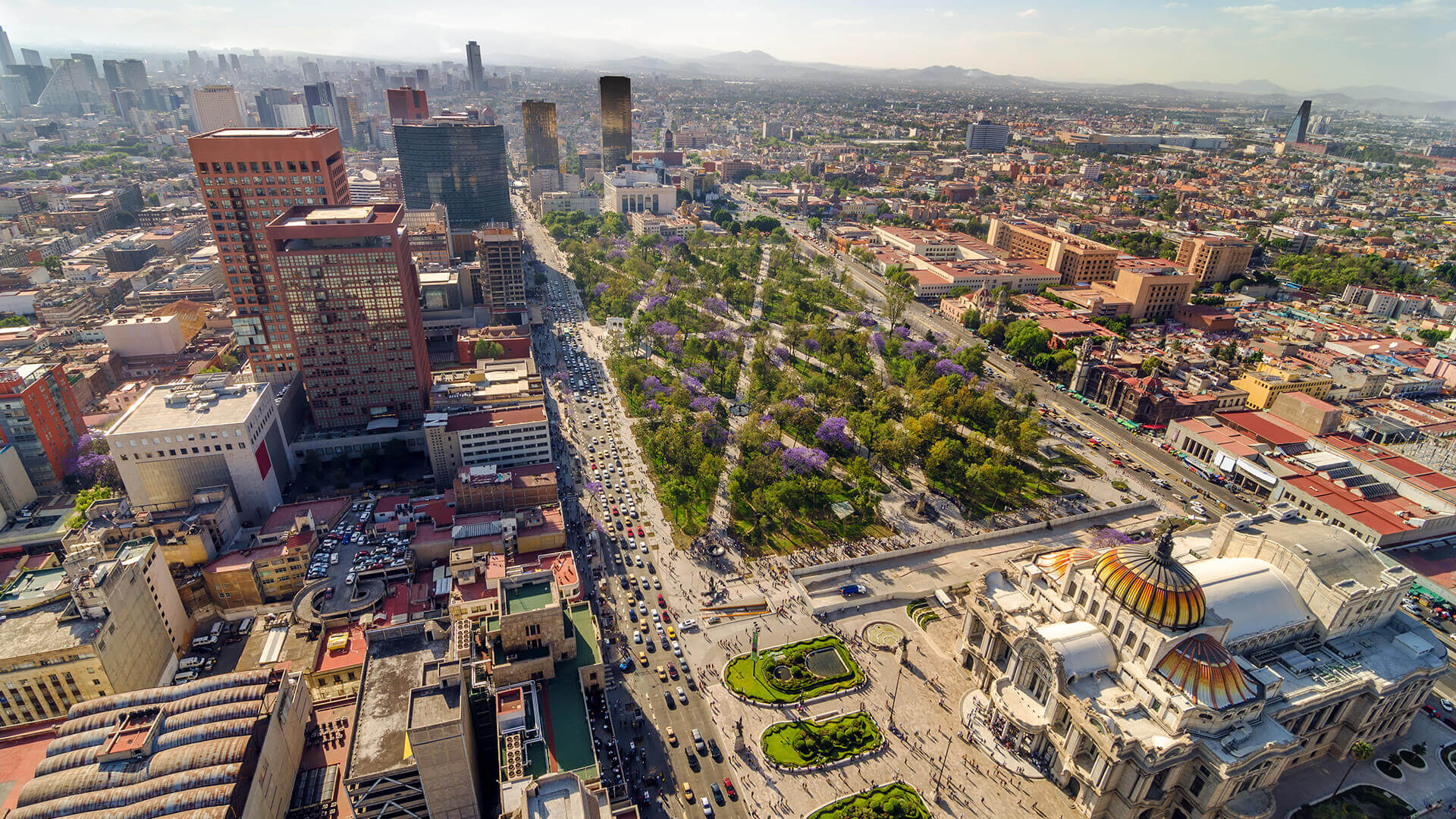 The capital of Mexico and the world's largest Hispanic city. It is one of the global alpha cities and leading financial centers in North America. The city was founded in 1325 by the Aztecs, then since 1821 it became the capital of independent Mexico since. Today it’s the most important political, economic and cultural center of the country.

Mexico City is a high-altitude metropolis (the height of its center is 2240 m). It is located in a picturesque intermountain basin, in the very center of the country on the Mexican Highlands. Occupies an area of ​​1,485 km², which is inhabited by 9.1 million inhabitants. The population density is 6000 people / km².

Mexico City is not included in the top of the most visited capitals in the world, but the unique combination of modernity and antiquity, the heritage of different cultures, famous sights and magnificent nature attract millions of tourists to it every year.

The climate in Mexico City is moderately warm. The weather conditions of the capital are influenced by the humid subtropical high-mountain climate. The average air temperature in January is +12 °, in July +17 °. The average annual precipitation is 750 mm, most of which occurs in summer (150 mm of precipitation per month). Seasons are distinguished between dry and wet, which are formed under the influence of tropical cyclones.

The weather in Mexico City is hospitable all year round, but February, March and April are especially loved by tourists with excellent weather + 23.6 ° ... + 25.0 °. In general, the peak of the tourist season in the country falls in the period from October to mid-summer, with “spikes” during the week before New Year, Easter and spring break.

Mexico City has a very bad environmental situation due to strong gas pollution, so thick smog is a habitual phenomenon for local residents. In addition, since the city is located in an earthquake-prone area, small earthquakes often occur in the capital of Mexico.

Mexico City is a city of contrasts, like many capitals in the world: modern skyscrapers stand next to ancient buildings, and poor neighborhoods coexist with the splendor of palaces. It is called an “open-air museum”: there are 10 archaeological zones, more than 1400 historical relics, several academies, more than 80 museums, theaters and concert halls have been preserved.

Zócalo: The Birthplace of the Constitution 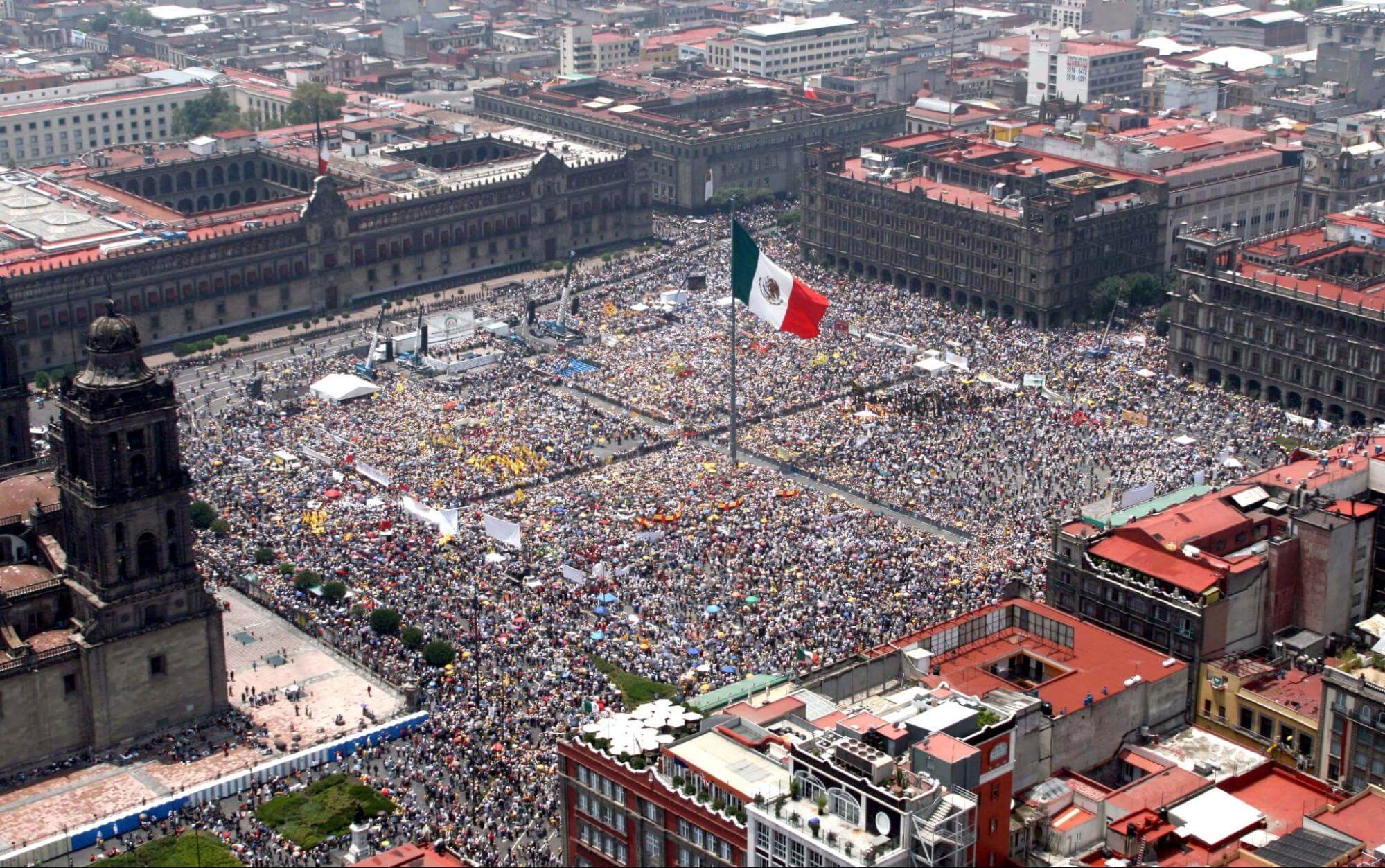 The main square of Mexico City is located in the historic center of the capital and has an area of ​​46,800 m². It is the largest square in Latin America and the second largest in the world. The Zocalo square was built in the Baroque style and has a square shape. It is often called “an open-air museum, as many of the most important architectural monuments are concentrated around it: the National Palace, the Cathedral of the Assumption of the Blessed Virgin Mary, the sculpture of the Archangel Michael, the old city hall, etc. All the most important events take place on Zocalo: holidays and festivals, parades, demonstrations, festivities, concerts are held. 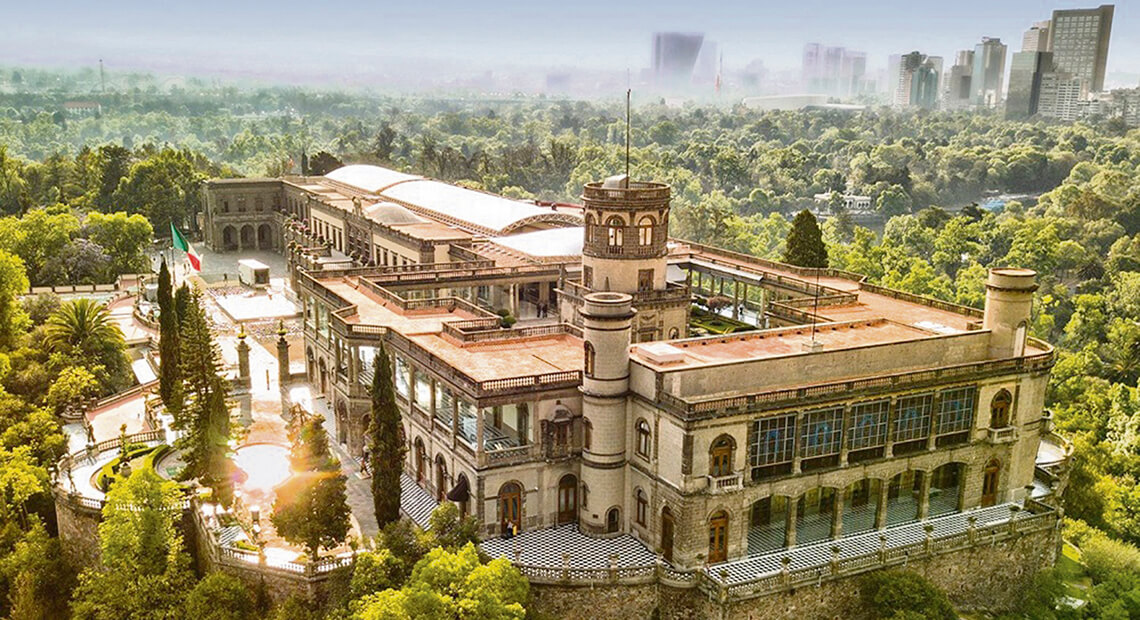 Chapultepec Park is located on an area of ​​about 700 hectares on the hill “Chapultepec” in the center of Mexico City (Miguel Hidalgo district). It is the largest park in the Western Hemisphere, having received the title of “capital lungs”, which is quite justified for the polluted metropolis. In the Nahuatl language, Chapultepec means "hill of grasshoppers" or "mountain of crickets". In terms of attendance, the park ranks second among the attractions of Mexico City. There are numerous cultural and natural treasures on the territory of the oldest park, which is more than 800 years old:

The National Museum of Anthropology and 7 more museums;

a system of canals and lakes, which during the Aztec Empire served as a source of drinking water.

85 thousand trees (cedars, sequoias, palms, eucalyptus, pines) grow here; this is 52% of the green spaces of the capital.

The beautiful Chapultepec Castle is a unique neoclassical building at an altitude of 2325 m above sea level, in the past a military academy and the residence of the emperor and presidents of Mexico. In 1944, the castle was turned into a historical museum with preserved royal and presidential interiors. The National History Museum is located on the upper floors of the castle.

One of the most outstanding places in the park is the monument to the hero-children.

The National Museum of Anthropology 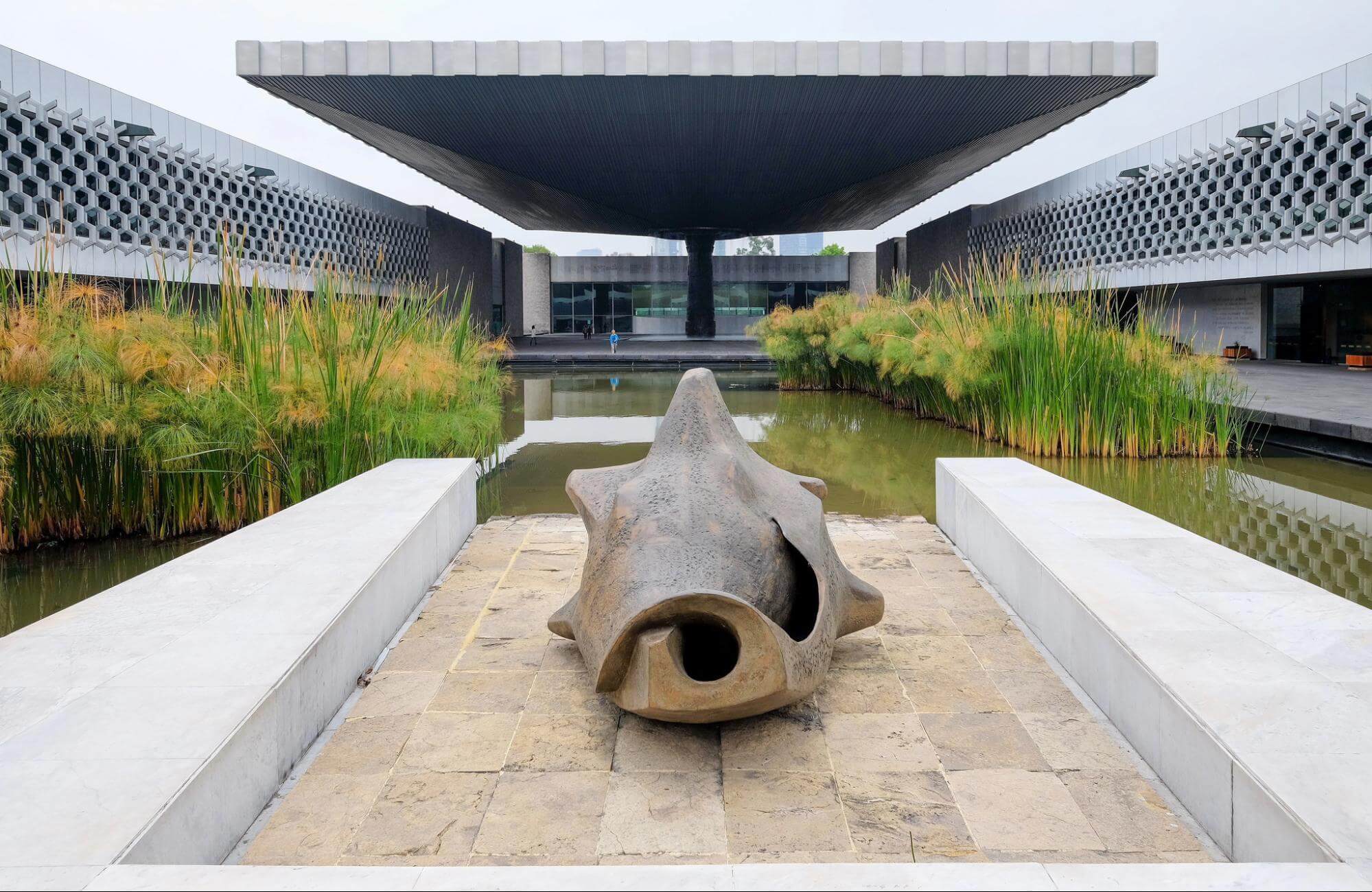 More than 2 million people a year visit the National State Museum of Anthropology. It is located in Chapultepec Park. The 1964 building hides 23 exhibition halls under its roof, which house a unique collection of anthropological and archaeological artifacts from the pre-Columbian era, the world's largest collection of Mesoamerican art and an extensive ethnographic exhibition. The area of ​​the museum is about 8 hectares, of which covered areas occupy 44,000 m², and 37,000 m² are open areas, including a courtyard with the famous "umbrella", an 11-meter concrete column with a waterfall.

At the entrance to the museum, there is a huge monolith weighing 167 tons. The museum has a unique collection of works of art, evidence of the culture of the Maya, Aztec, Toltec and other indigenous peoples of the American continent.

Templo Mayor and the Great Pyramid of Tenochtitlán 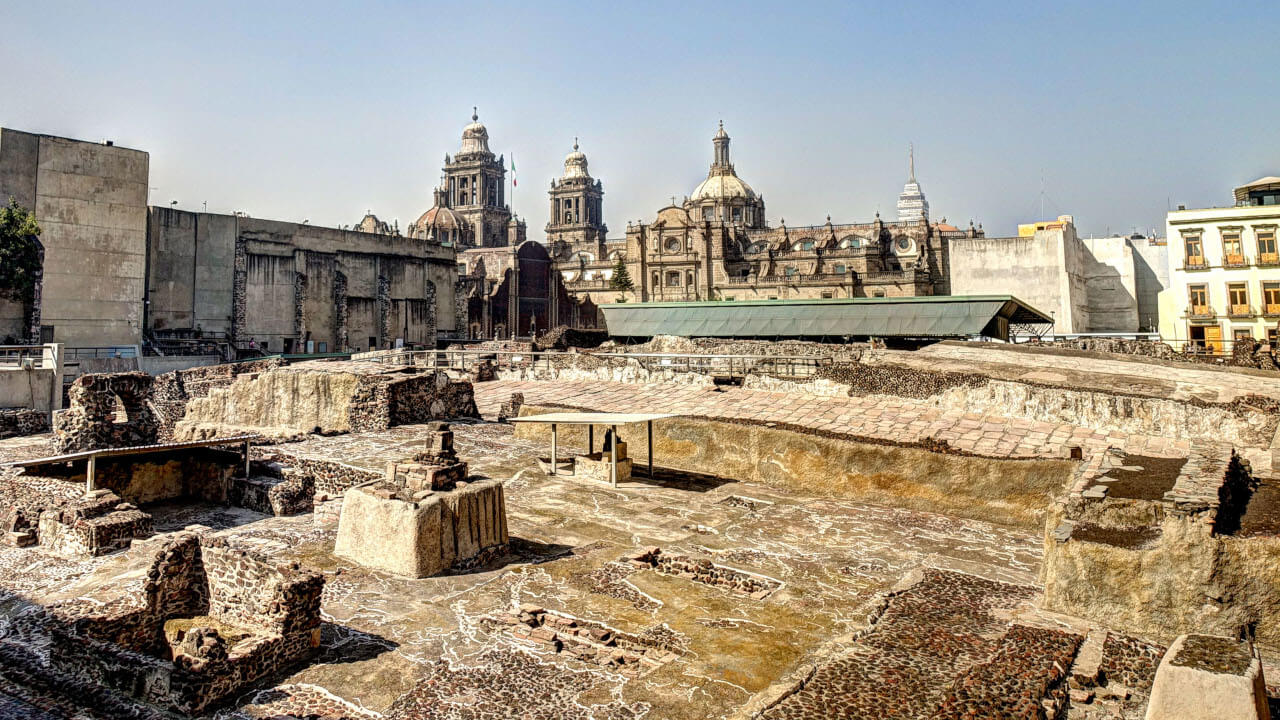 Templo Mayor (Huitzilopochtli pyramid) is a complex of religious buildings. It was built around 1325 in the capital of the Aztec state, Tenochtitlan, and, possibly, the very first building in the city. From the Spanish name it is translated as "the main (large) temple". During its existence, this Aztec temple has undergone 6 renovations.

Today the museum consists of a closed exposition (more than 7 thousand exhibits in 8 thematic halls on two floors) and open excavations (part under a canopy, and part under the open sky). Museum visitors can see the foundations, architectural details of ancient buildings, the preserved part of the pyramid and the ritual tower. Templo Mayor is in the shape of a square. The pyramid towered 60 m and was the tallest building of its time. At the top of the pyramid stood two temples in honor of the sun and war god Huitzilopochtli and the rain and fertility god Tlaloc. This place is part of the historic center of Mexico City, which was inscribed on the UNESCO World Heritage List in 1987.

Cathedral of the Assumption of the Blessed Virgin Mary into Heaven 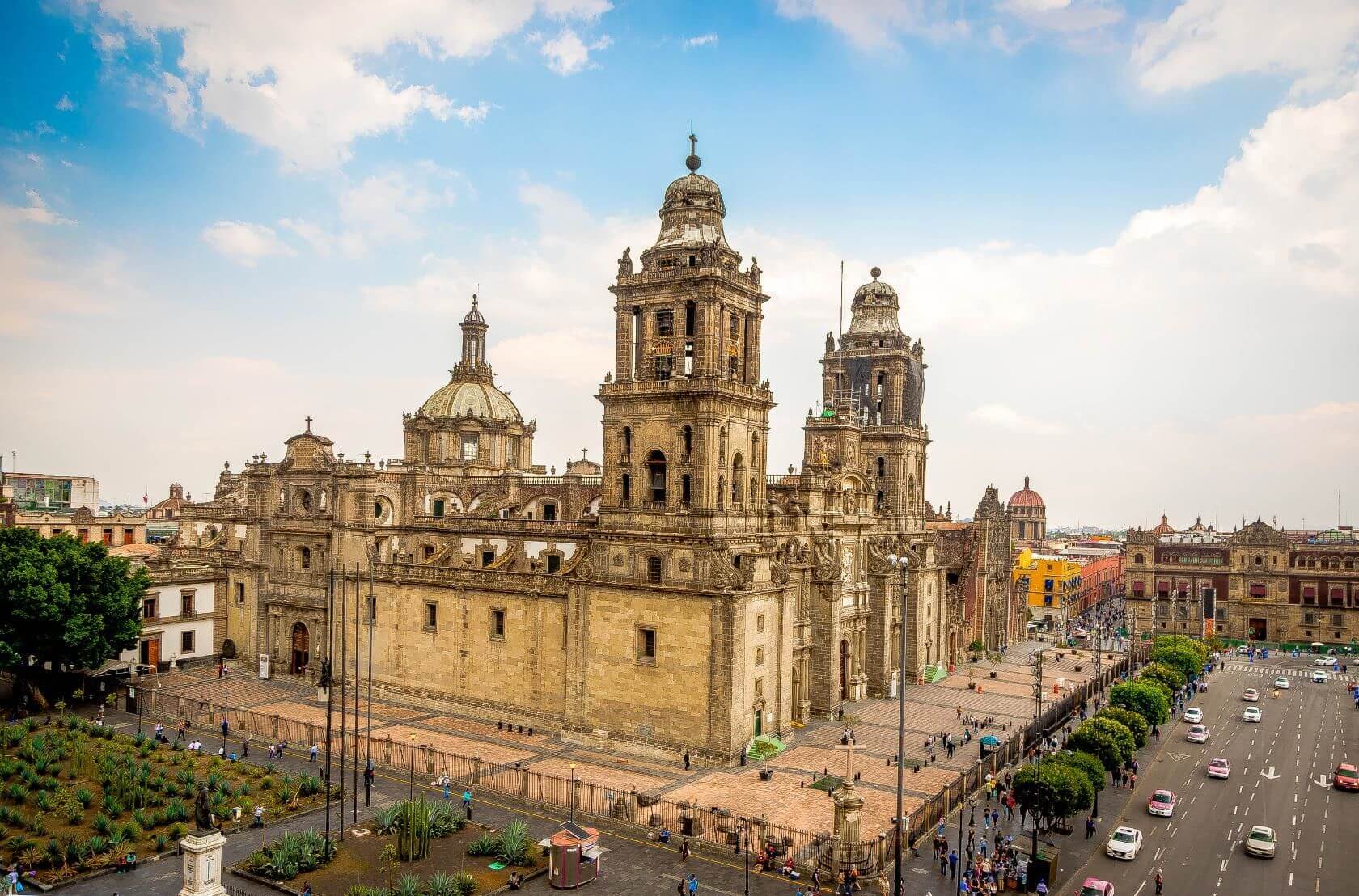 One of the most significant churches in Latin America and one of the oldest structures in the capital of Mexico. The Cathedral since the 16th century has served as a majestic decoration of the main square of Zocalo. The construction of the temple lasted from 1573 to 1813, which affected the appearance of the temple, enriching it with a variety of architectural styles: Gothic, Baroque, Neoclassicism, etc. In 1547 the temple was awarded the Cathedral dignity of the Holy See, and it became the Cathedral.

Measuring about 60 m by 128 m, the construction has a maximum height of 67 m and consists of two bell towers with 25 bells, a central dome and three portals decorated with filigree carvings and framed by columns and statues. Five naves with 51 vaults, 74 arches and 40 columns. The cathedral has about 150 windows. There are 16 richly decorated chapels along the perimeter, 14 of which are open to the public.

High ceilings, gilding, rare works of art, religious relics and crypts make the interior of the temple luxurious and an object of admiration for tourists. One of the features of the Cathedral is a giant pendulum from the center of the dome, which draws a diagram on the floor, noting geomagnetic changes.

The Palace of Fine Arts 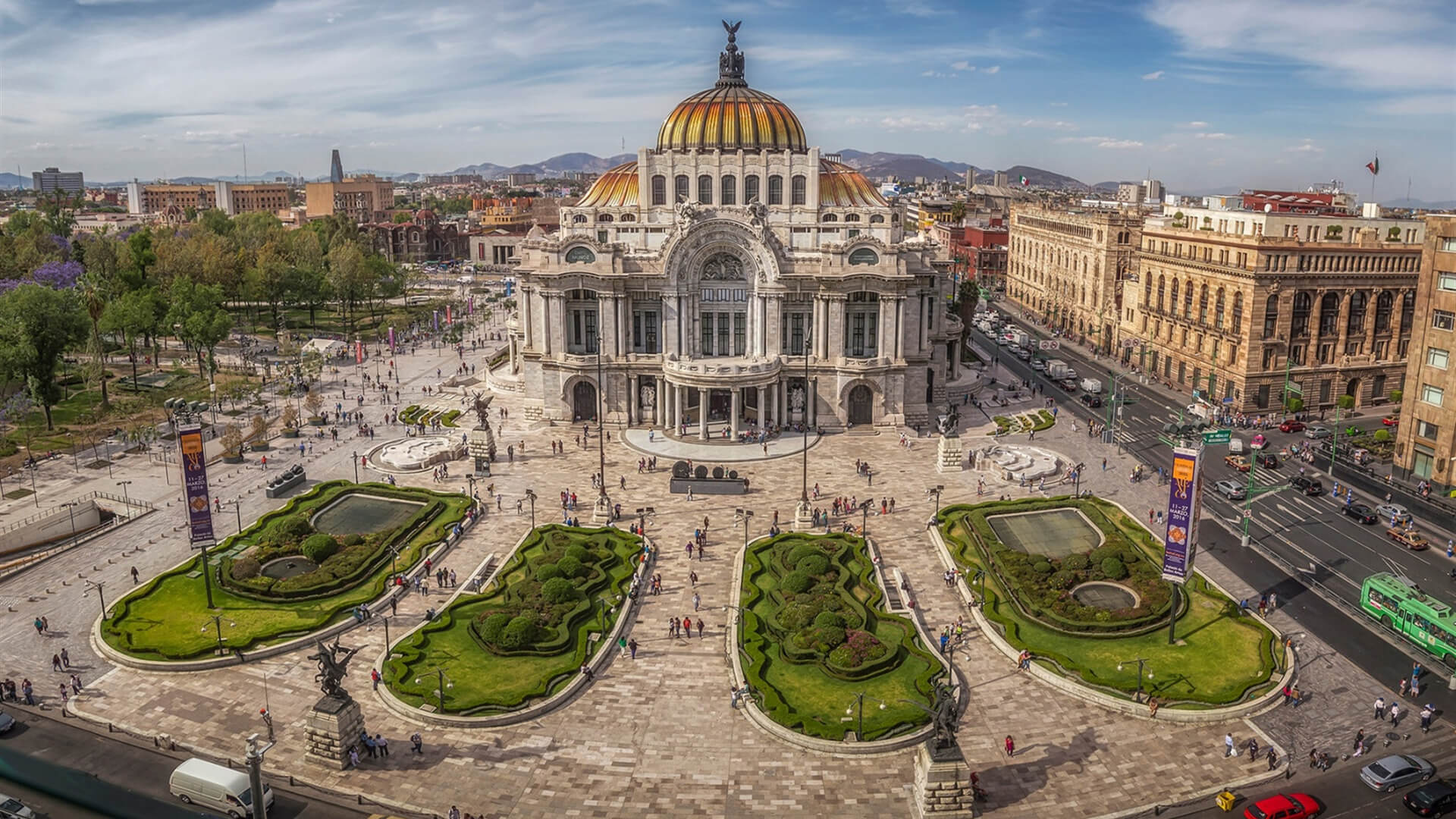 The Palace of Fine Arts rightfully bears the title of the most beautiful building in Mexico. The palace was founded in 1934 and is made of snow-white Carrara marble in the Art Nouveau architectural style. The interior is decorated with frescoes by famous Mexican painters. Today, the Palace has united under its roof an opera house, a library, the Palace of Fine Arts Museum and the Museum of Architecture.

In addition to the main activity of the theater, concerts, performances and other events are regularly held here, and the folklore ballet and the national symphony orchestra are frequent guests of the stage.

There is a picturesque park right in front of the theater, which is recognized as the oldest (more than 400 years old) not only in Mexico, but also in America. A green oasis of silence attracts guests and residents of the city with the coolness of fountains, well-groomed paths and cozy benches.

How to get to Mexico City: train stations and airports 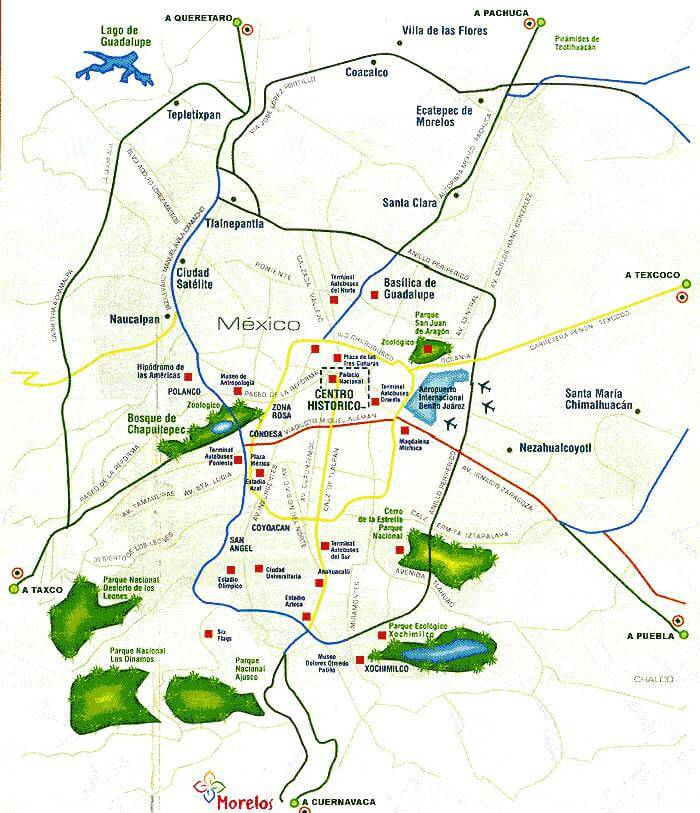 Buenavista station is the only active passenger railway station

Mexico City has 4 main bus stations (North, East Passenger, Central South and Central West) that serve the North, West, South and Southeast, depending on bus routes throughout the country.

Public transport in the capital is represented by the metro, bus rapid transits, taxis, trolleybuses and other types of transport.

Bus rapid transits (BRT) are a type of transport that combines the metro and the bus. There are four BRT lines in the capital, each of which is marked with its own color. They have their own lane.

Electric transport in Mexico City is quite developed, but it is being phased out. Today, there are 7 trolleybus lines operating for passengers. The most important trolleybus route, Eje Central, stretches 25 km from the Northern Bus Station to the Southern Bus Station. There are a lot of trolleybuses on the line (110 units), so they run often.

Bus rapid transit is a high-speed bus service. Designed for suburban traffic. At the moment, there are three lines with a total length of 52 km with 95 stations. A new 4 line with 29 stations is being introduced.

In Mexico City, special pink buses and taxis are common, which are considered safer for women.

The Mexico City Metro is the second largest in North America and one of the largest systems in the world. The capital has 12 metro lines, covering the main areas of the city, as well as the airport and Buenavista railway station. The metro has 195 stations (excluding architectural delights), 24 of which are interchange hubs. 115 stations underground (maximum depth 36 m), 55 at ground level, 25 above ground. Some of the stations hold exhibitions of photographs, some of them have mosaics. Station "Salto Del Agva" of the first line became a collection of portraits of prominent personalities, and at the transition between the stations of La Raza of the fifth and third lines they made a real starry sky. 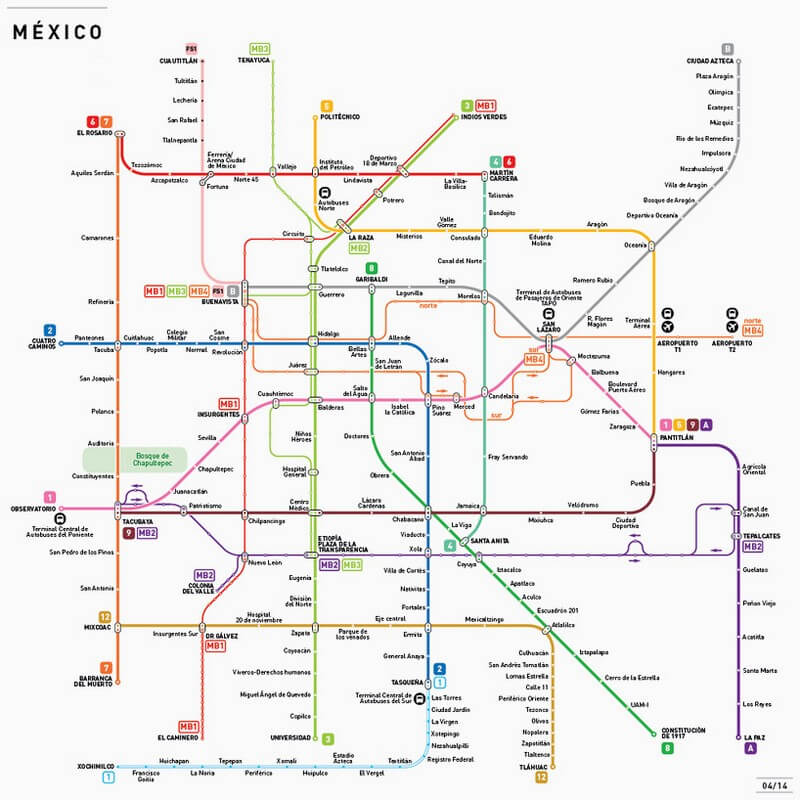 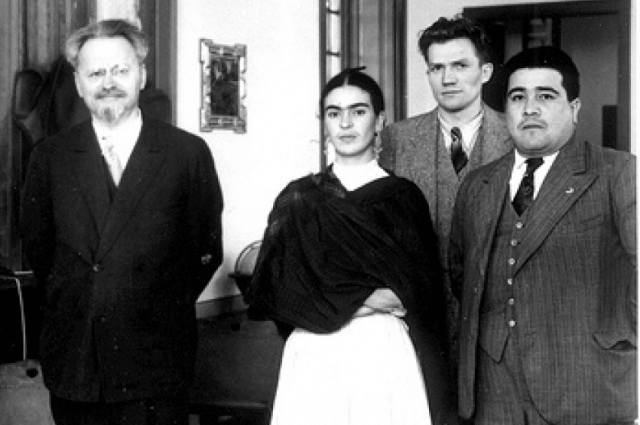 Leon Trotsky, who staged a coup in October 1917 in Russia, was later forced to flee his country, fearing the deadly hands of Stalin. Trotsky arrived in Mexico with his wife in 1937 (Mexico during these years did not yet have diplomatic relations with the USSR). And they were hospitably received by the family of the famous Mexican artist Diego Rivera. Since Diego himself was at that moment in the hospital due to inflammation of the kidneys, Lev and Natalia were settled on the estate of Frida Kahlo, a talented artist and Diego's wife. She held a meeting of guests, with other like-minded Soviet revolutionaries, in the Mexican port, from where she headed to Mexico City on a special train "Noble". Arriving in the capital, Trotsky and his wife were met by an escort accompanied by police. Police took them to the suburb of Coyoacan, where the guests were accommodated in the Azure House of Frida Kahlo. It is worth noting that Frida Kahlo herself had an equally temperamental and rebellious disposition. Her talent and ardent disposition did not leave the revolutionary leader indifferent to herself. In her youth, Frida had a terrible accident that made her disabled, because of which she limped. Frida's husband, like many talented and emotional people, driven by the pursuit of their own desires and ambitions, did not differ in loyalty to his wife and she herself had relative moral standards. Trotsky's love and Frida's ambition led to the fact that a romantic relationship began between them, but which was short-lived.