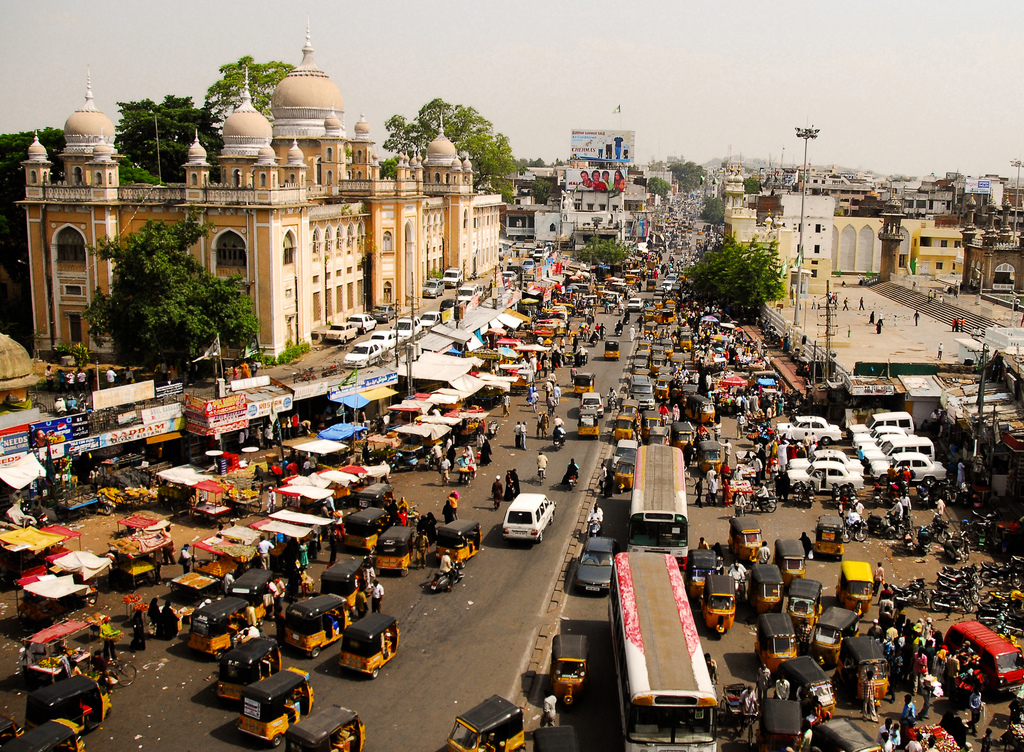 New Delhi is the metropolitan area of ​​the Delhi metropolis (the second largest city in the country) and the official capital of India. Legally, New Delhi is a separate city, but in fact it is an area of ​​one of the largest megacities in Asia and covers an area of ​​only 42.7 km² with a population of about 300 thousand people.

A cosmopolitan city, the cultural center of India, one of the largest financial centers in South Asia, it territorially occupies the area of ​​the Old City and is a concentration of national attractions.

All three branches of government are concentrated in New Delhi:

The economic base of the Indian capital: tourism, finance and information sphere. In addition, New Delhi is the largest trading city in the north of the country.

New Delhi is located in a seismic zone of 4th degree and is subject to the danger of significant destruction.

The reasons for such a serious problem:

The climate in New Delhi is hot, semi-arid, with sharp seasonal changes in temperature and precipitation:

Long hot summers (April to October) with a pronounced monsoon season. The dry and short winter begins in November and reaches its peak by January. The winter period is accompanied by frequent dense fog.

The most interesting sights of New Delhi 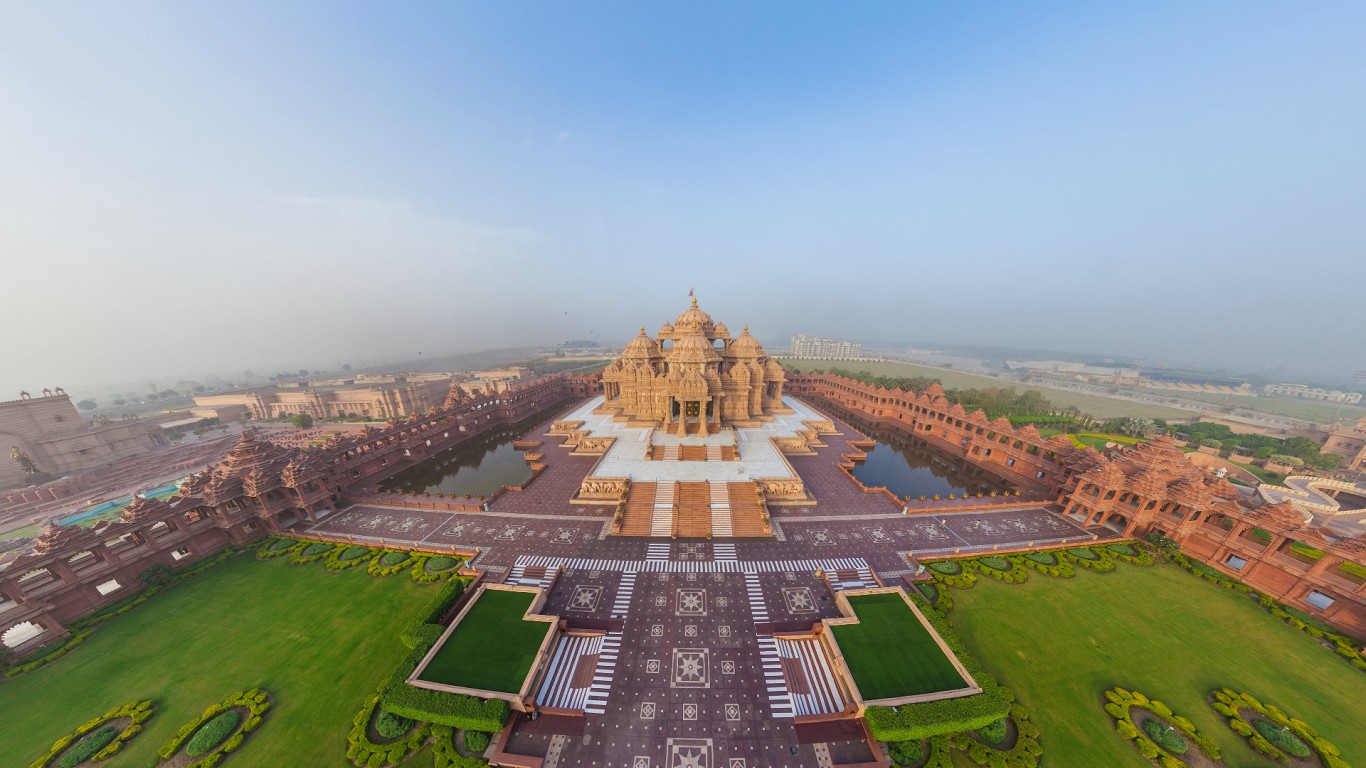 The Akshardham temple complex is located in the capital of India and occupies about 12 hectares of area, including:

The Akshardham Temple bears the title of the largest Hindu temple in the world, as evidenced by the entry in the Guinness Book of Records. The construction of the facility lasted 5 years and was completed by 2005.

The shrine was built of pink marble, symbolizing love for God, and the interior decoration with white marble symbolizes purity and peace.

The grandiose building (height 42 meters, width 94 meters and length 106 meters) is decorated with 9 domes, 20 thousand sculptural figures, 234 columns and 20 shikhkars (towers). There are 148 bas-reliefs of elephants along the perimeter of the temple building. Under the large central dome is a statue of a yogi revered in India, the ascetic Swaminarayana (3.4 meters high), the founder of the Hindu Vaishnava religious movement.

There is a permanent exhibition in the temple.

The unusual architecture and beauty of the temple annually attracts millions of tourists from all over the world. 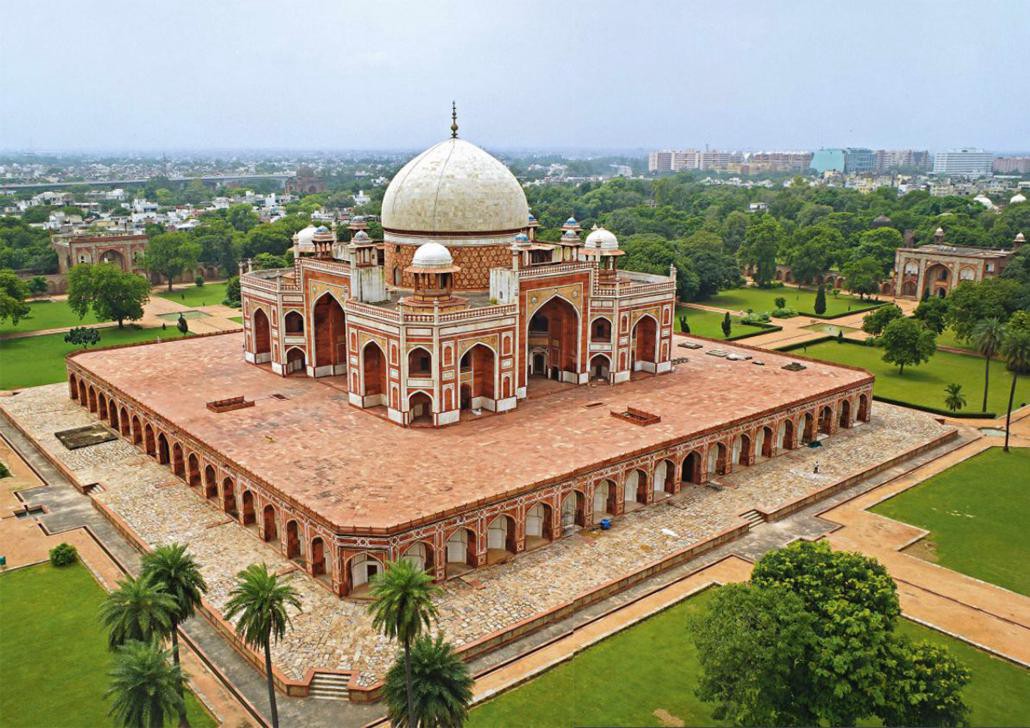 Humayun's Mausoleum is a UNESCO World Heritage Site. The tomb is a unique architectural complex located in the Char Bagh (four gardens).

The tomb of the Mughal emperor Humayun was built by 1571 on the orders of his wife Hamida Banu Begum. The lower floor with many arches along the perimeter of the building is occupied by burial rooms, where the relics of members of the Timurid dynasty are preserved. In the central hall on a large stone platform is Humayun's marble sarcophagus, next to his wife's sarcophagus.

The building of the Humayun Mausoleum has collected several new architectural features of Persia and India at once, making it an example of a unique style:

According to the idea of ​​the authors of the construction, the tomb was to become the personification of the Garden of Eden. The implementation of this idea turned out to be so successful that it began to be used not only in India. 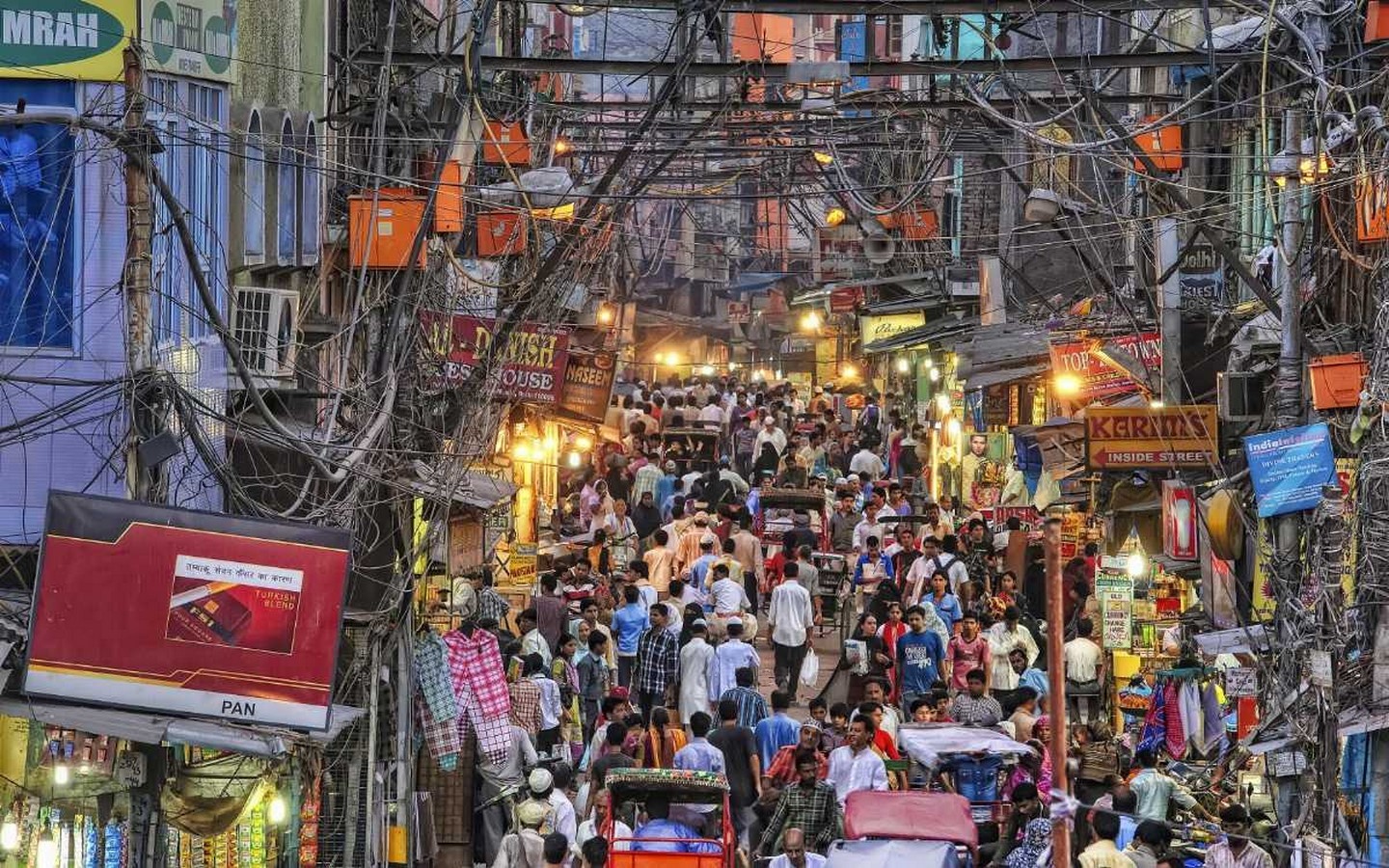 The largest and busiest market in India, Chandni Chowk was built in the 17th century. Its name translates as Moonlight. It is a 4 km long street with historic quarters on both sides. Everything from gorgeous jewelry to spices and essential oils can be found here. The market is divided into districts according to product groups to make it easier for buyers to navigate this lively noisy stream. Trading stalls alternate with local “cafes”.

Variety and authentic food is prepared in front of the customer, and the voices of local fast food vendors can be heard throughout the market.

Ideal for shopping and the largest wholesale market in India, renowned for its jewelry, wood carvings, high quality silks. 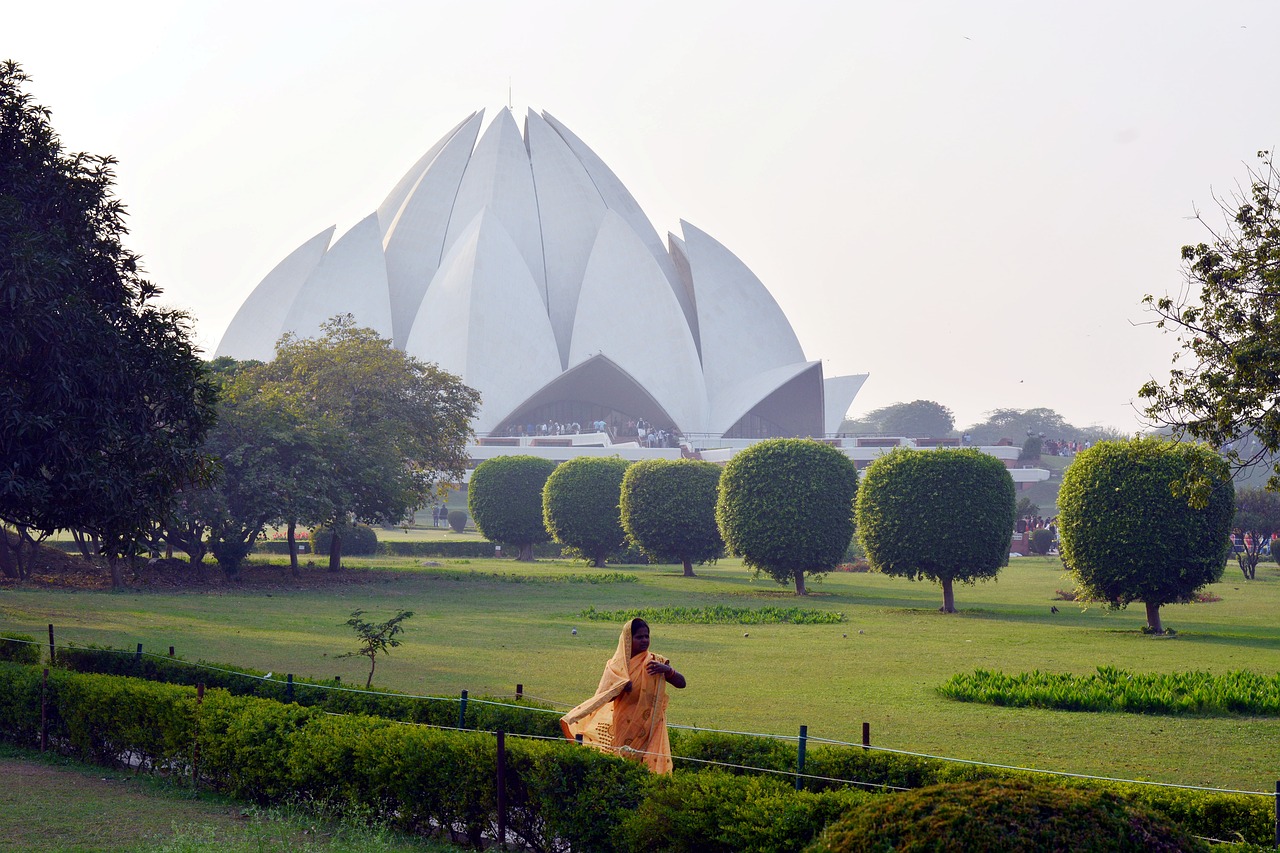 The main temple of the Indian subcontinent is one of the significant landmarks of New Delhi. Built in 1986 by the famous architect of the Sydney Opera House: Fariborza Sahba. Due to its unique architecture, the temple has been awarded several architectural awards.

The large building is executed in the style of expressionism in the form of a lotus of white Pentelian marble: 27 "petals" are faced with marble; nine doors of the temple lead to the main hall. The large central hall, 75 meters in diameter and 31 meters high, accommodates 1300 people. The building has a special natural ventilation system that allows you to maintain a comfortable freshness inside the premises even on hot days, which is borrowed from the experience of building ancient temples.

The grounds of the Bahá'í House of Worship, including a garden and 9 impressive pools, cover an area of ​​10.5 hectares.

More than 4 million people visit one of the most revered and popular religious shrines annually. 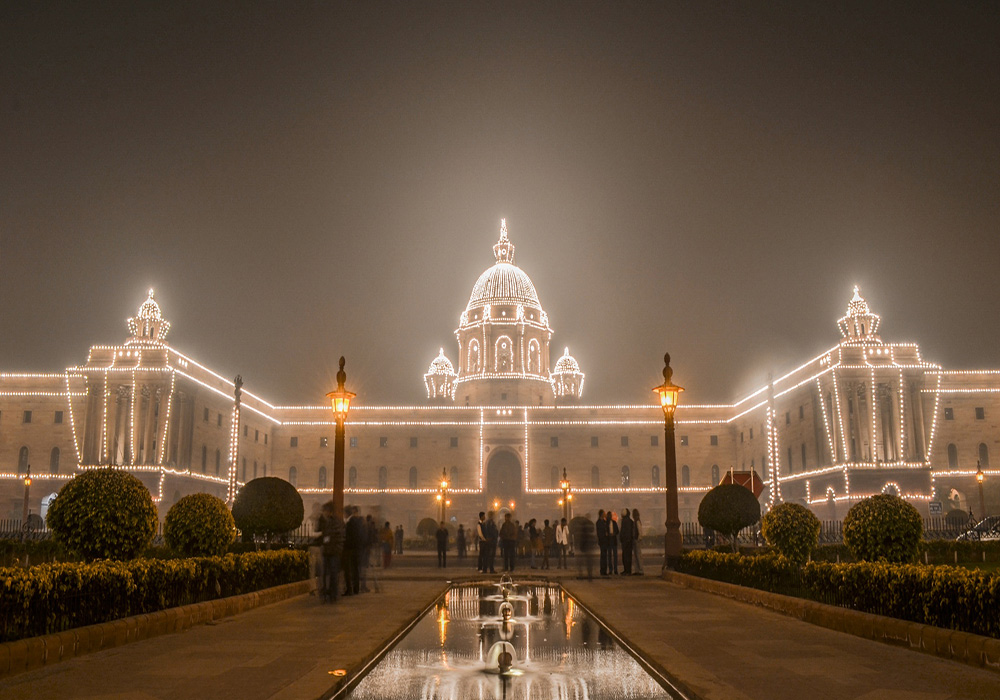 Rashtrapati Bhavan has been the official residence of the President of India since 1950. The Presidential Palace is the world's largest residence of the first person of the state. The architectural complex with an area of ​​19,000 m² was designed by the British architect Edwin Lutyens and built in the neoclassical style of 700 million bricks and 85 cubes of stone. The entire presidential residence covers an area of ​​130 hectares, including gardens, stables, outbuildings, offices, etc.

The palace complex has two wings: the first is a separate four-story building for the Viceroy and residents, and the smaller wing is for guests. The Presidential Palace is designed around a large square, has several courtyards and 355 rooms.

At the rear of the Palace complex, the Mughal Gardens are located, as an integral part of the monuments:

Today Rashtrapati Bhavan is a grandiose architectural structure, it is a museum, where you can learn about the past lives of the presidents of the country. 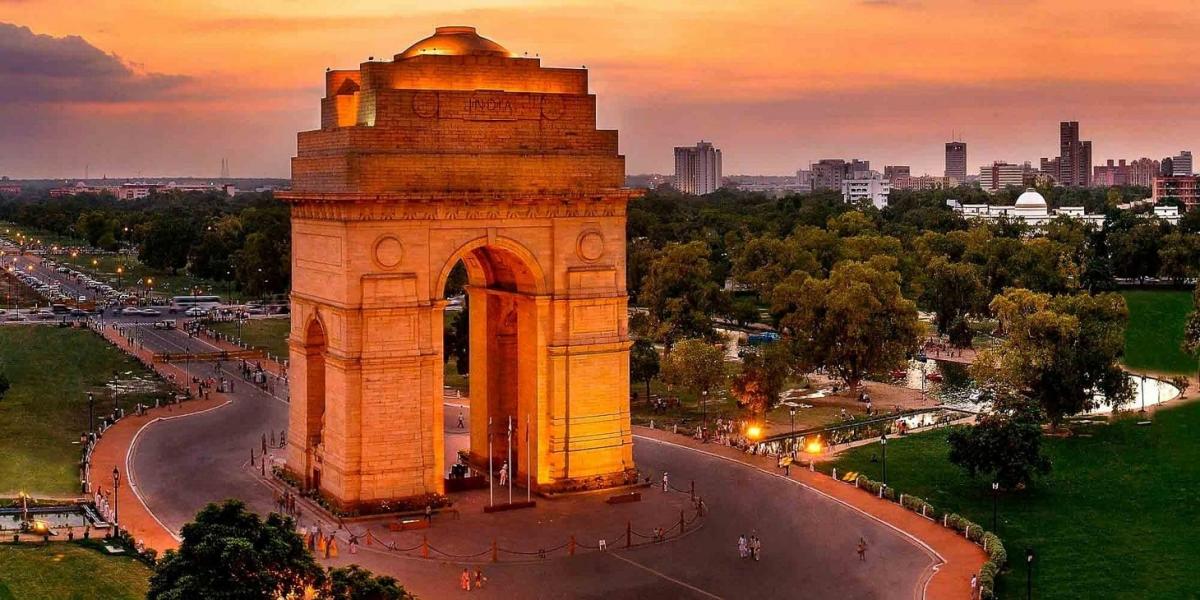 The symbol of New Delhi is the Gateway of India, founded in 1931 in memory of 90 thousand soldiers of the British Indian army who died during the First World War and the Anglo-Afghan War. One of the largest war memorials in India, designed by the talented English architect Edwin Lutyens, is located on the ceremonial boulevard of New Delhi (Rajpath).

The monument is made of Bharatpur stone, on which the names of all the dead soldiers are immortalized. At the foot of the arch in 1972, at the initiative of Indira Gandhi, an eternal flame was opened.

Not far from the Gate, in a large recreation park popular with local residents, there is another shrine: the Tomb of the Unknown Soldier. This is a must-see place for every head of state visiting India.

The National Military Architectural Complex, which includes the National War Museum, annually attracts a huge number of tourists, dipping them into the atmosphere of the greatness of the feat of the human spirit.

How to get to New Delhi: train stations and airports

Delhi's main airport and India's busiest airport. The aero complex has: 3 runways (one 4.43 long, the longest in Asia), 6 terminals (1, 1A, and 1B serve domestic flights; 2 and 3 sevre international; the pilgrim terminal operates from October to December; cargo). The carrying capacity is about 27 million people a year. 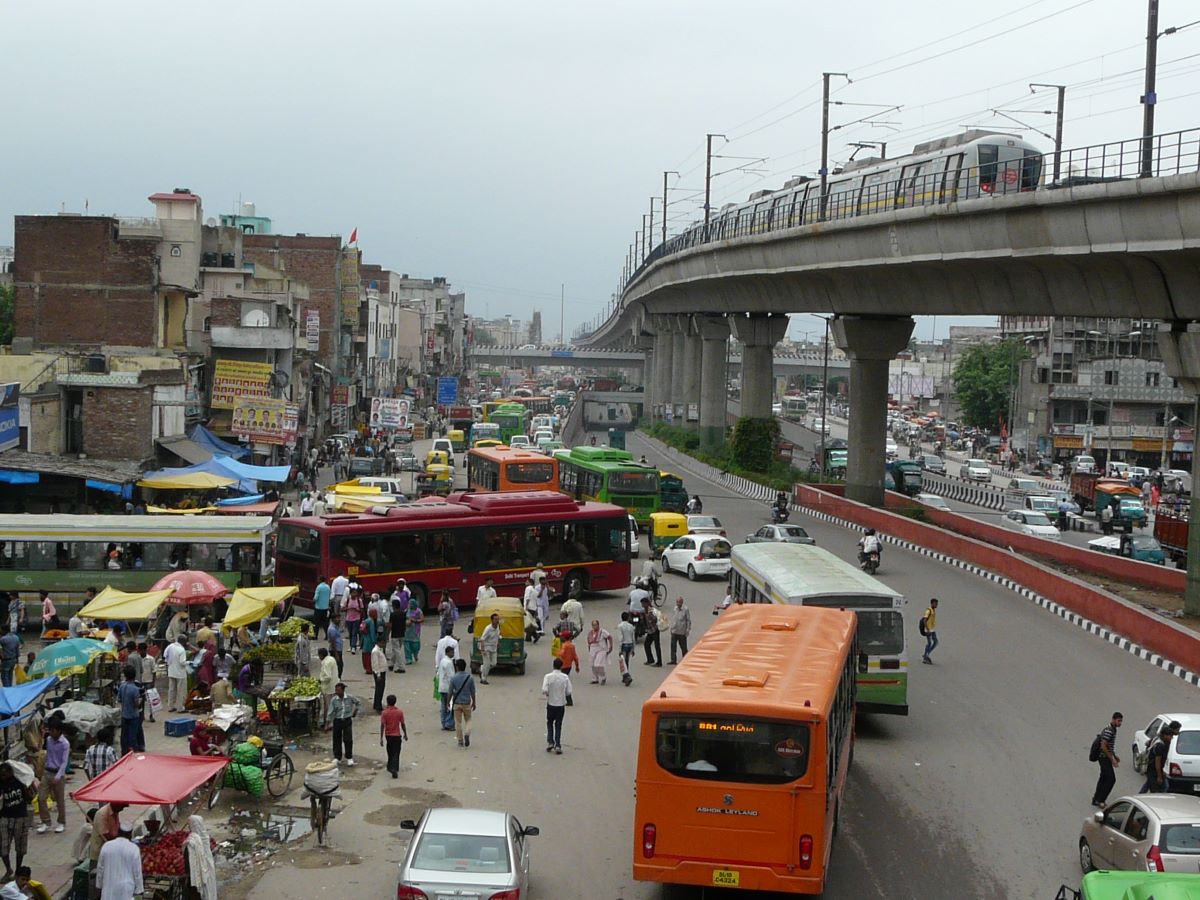 Public transport in New Delhi is represented by:

Traffic on the city's roads is difficult due to the high traffic density, at which the speed of transport during rush hour reaches only 15-20 km / h.

The bus system in New Delhi is one of the most developed in India. The bus route system is operated by the Delhi Transport Corporation, which operates the bus fleet with the largest number of transport units in the world. It is the most popular and affordable form of transport, accounting for up to 60% of passenger traffic. 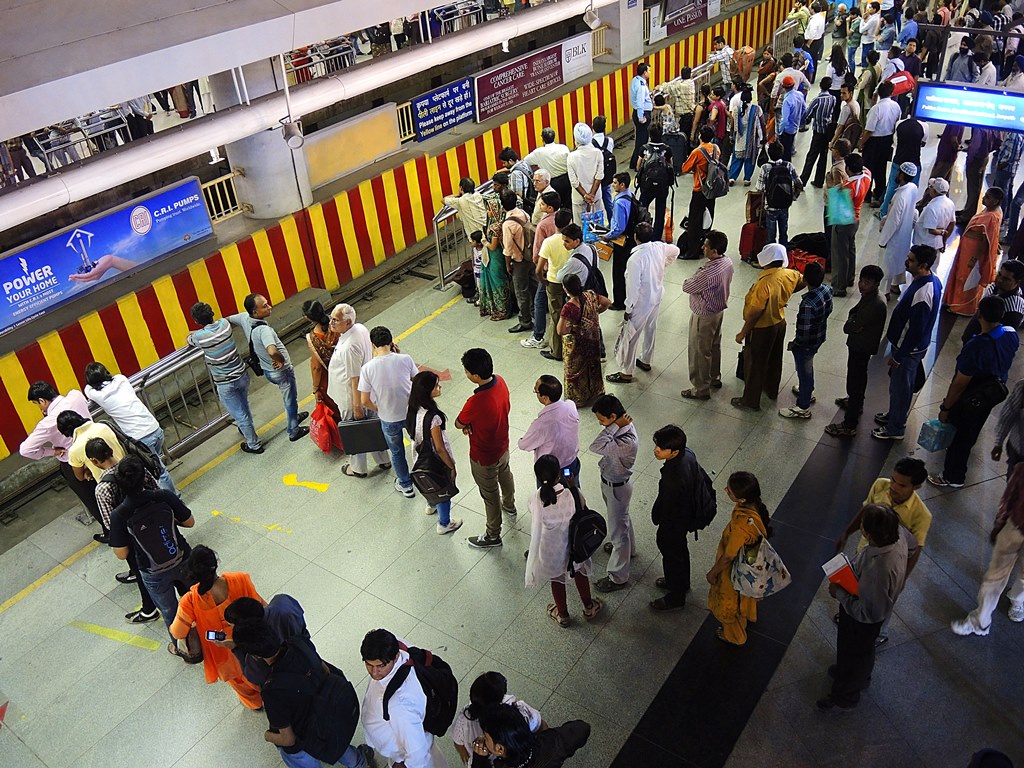 The fastest, most comfortable and reliable, but quite crowded form of public transport in New Delhi is the metro. 4 branches of the Delhi Metro run through the capital. The metro map is very clear and helps to orientate not only in the subway, but also in the city itself. The fare depends on the distance between stations, but is one of the cheapest in the world.

Features of the subway:

Metro station is the place from which you can get anywhere in Delhi. 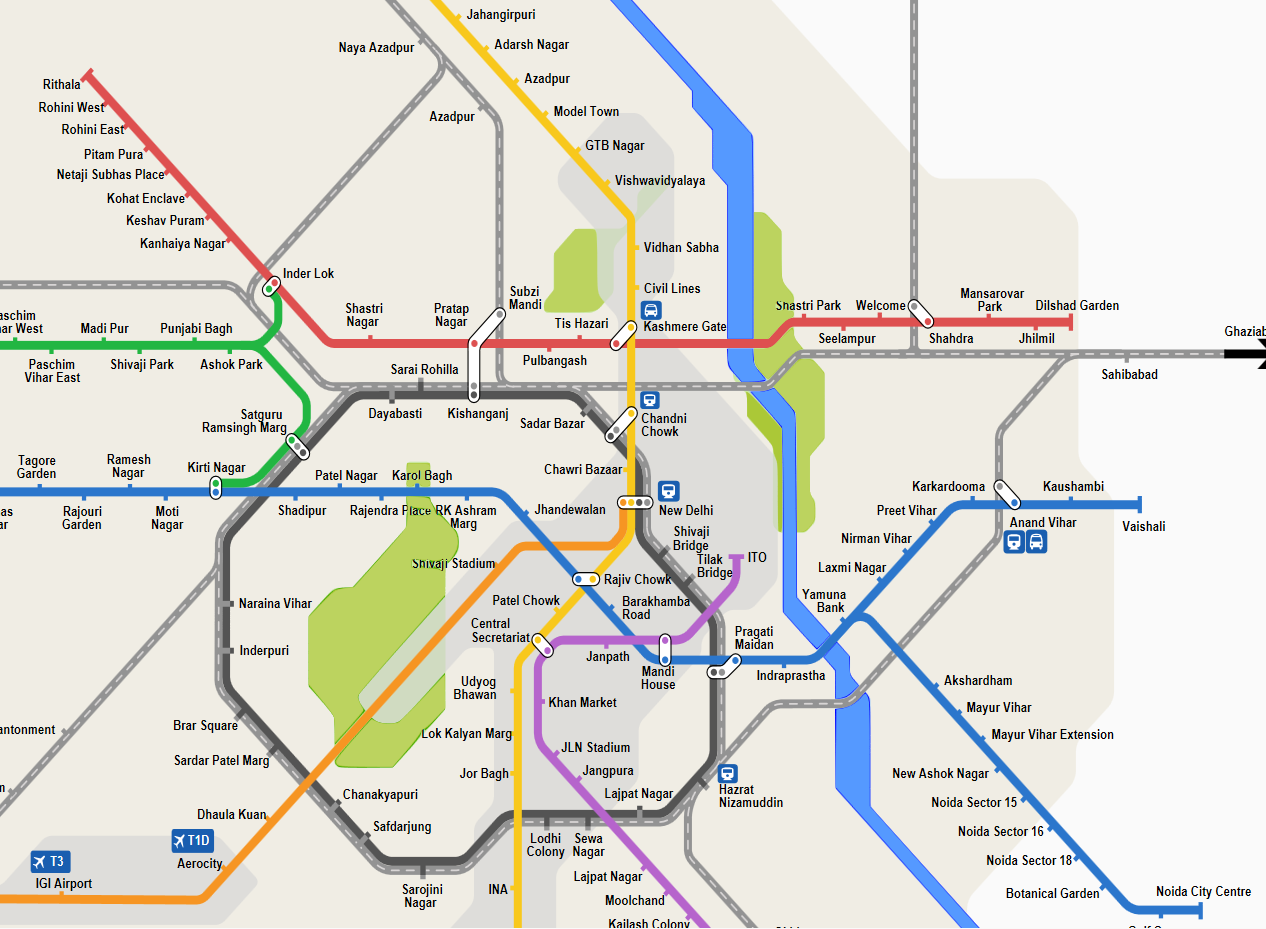 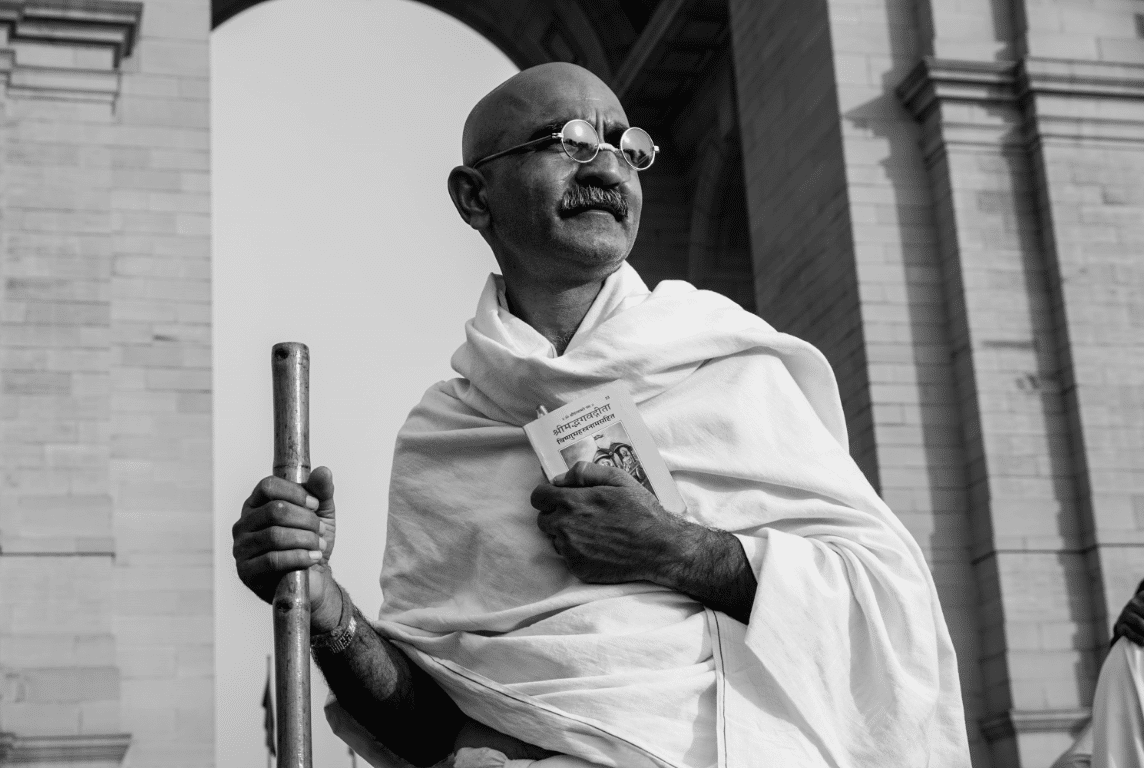 Mahatma Gandhi is a public and political figure in India, whose name has gained worldwide fame. Mr. Gandhi devoted his entire life to the struggle for the rights of his fellow tribesmen, following the principles of the philosophy of non-violence. Subsequently, this philosophy became a whole movement called "Satyagraha". Satyagraha was based on nonviolence, nonviolent resistance and civil disobedience.

The spiritual leader of the non-violence movement developed a code of conduct for the Satyagraha participants, each thesis of which was supported by his personal example:

Mahatma Gandhi was born into a religious and respectful family and believed that all people have an innate divine nature, regardless of race, caste, ethnicity or religion.

For 13 years, Gandhi was the head of the Indian National Congress and, through secular laws, tried to end caste discrimination. Gandhi's proposals to resolve the issue of the untouchables did not find support among prominent Indian politicians.

In 1930, Mahatma Gandhi became the inspirer and organizer of one of the most famous actions of the non-violence movement, which was directed against the salt tax and the salt monopoly, the "salt campaign". The ideologue of Satyagrahi, together with his followers, made a 390-kilometer hike from Sabarmati Ashram in Ahmedabad (Gujarat state, Western India) to the coast of the Arabian Sea, followed by demonstrative evaporation of salt without paying taxes. During the action, which lasted about a year, more than 80 thousand Indians were arrested, including the Mahatma himself. The protest caused a huge resonance in the world and became the beginning of new confrontations.

In January 1948, Gandhi was assassinated in an elaborate conspiracy. The UN-established International Day of Non-Violence is timed to coincide with the birthday of Mahatma Gandhi and is celebrated on October 2.

In honor of the great Indian public figure and political leader, monuments and museums have been erected in many cities around the world. More than 10 films have been shot about the life and work of Mahatma Gandhi.