If you are lucky enough to have lived in Paris as a young man, then wherever you go for the rest of your life, it stays with you, for Paris is a moveable feast (from a letter of Ernest Hemingway to a friend, 1950). 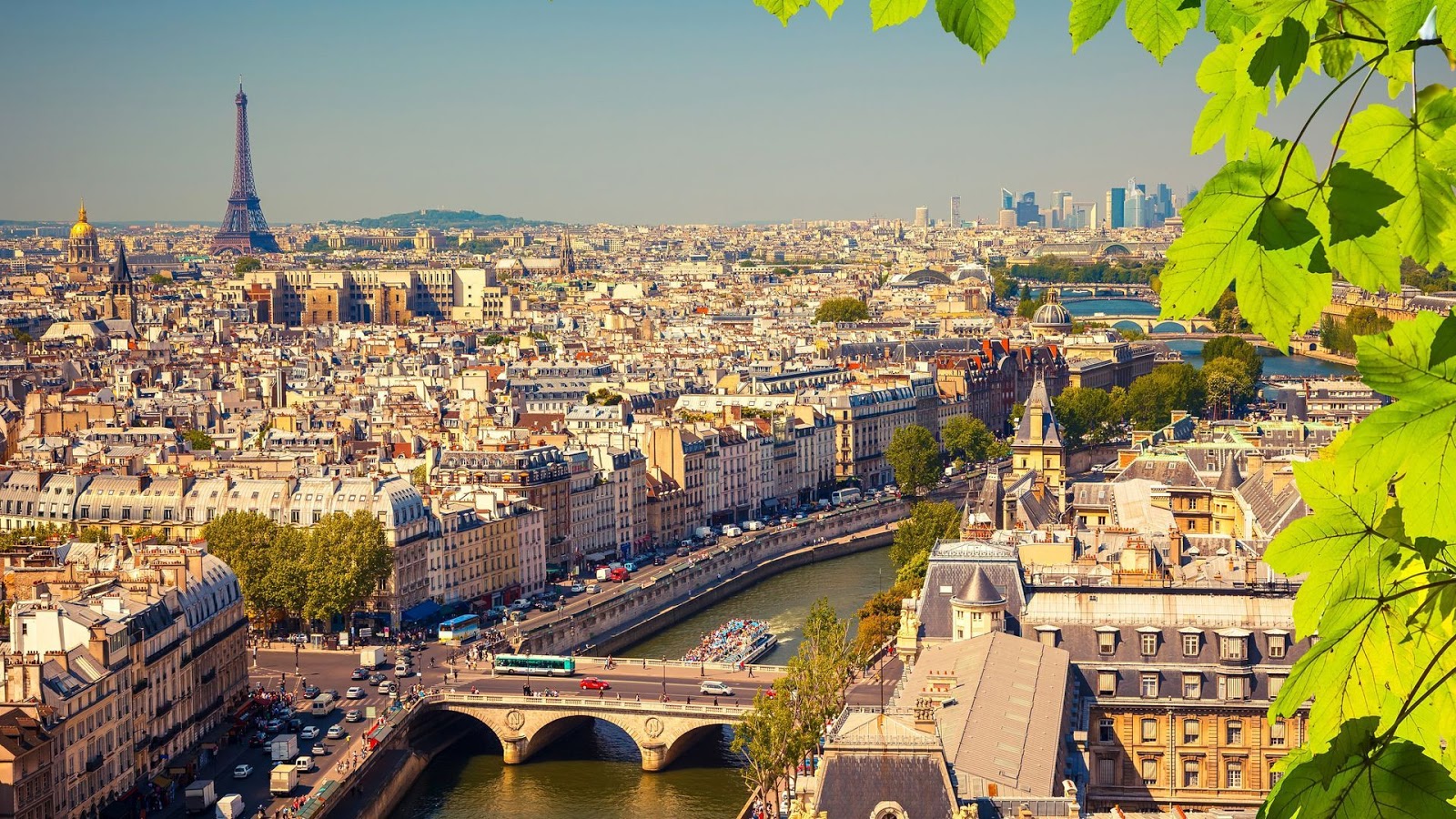 One of the main European cities, its capital and largest city of France is located in the north of the country  along the Seine River. Paris is the center of both the political and economic life of the country, as well as a point of cultural and tourist attraction for millions of people from all over the world. Paris has the title of the most beautiful and festive – joyful city in the world, the capital of fashion, a symbol of love and romantic pastime.

The fifth largest city in the European Union with a population of 2.2 million people covers an area of 105 km2. The population density is about 21 th people/km2 without tourists, which is ten times more than the Parisians themselves. So in 2018, the city was visited by a record number of tourists – 50 million people. The time zone is UTC+01: 00, with summer time UTC+02: 00.

Paris climate and weather for today

The mild (without sharp changes and extreme temperatures) weather in Paris is due to the temperate continental climate with the influence of the North Atlantic current. The average temperature in summer is +25, in winter it rarely falls below zero. The offseason in Paris is characterized by cloudy and rainy weather. Snow-covered Paris is a rare phenomenon, and summers are usually not hot and humid. The weather feature of Paris is sudden downpours. The best tourist season is summer (May-July).

The most interesting sights of Paris 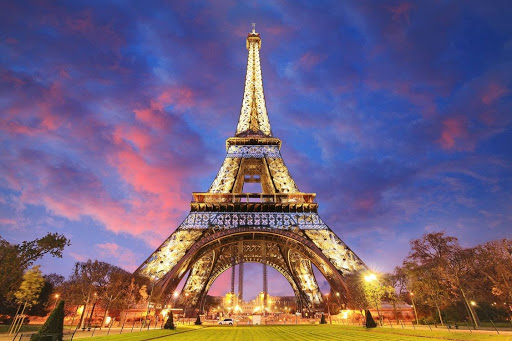 The Eiffel Tower is the hallmark and symbol of Paris. The tower was created by engineer Gustave Eiffel especially for the 1889 World's Fair on the Champ de Mars from wrought-iron. From the observation deck of the tower with a height of 274 meters, you can see the panorama of the whole Paris and its suburbs at a distance of up to 70 kilometers.

The height of the Eiffel Tower with the spire is 324 meters, and for more than 40 years (until 1930), the Eiffel  Tower was the highest structure in the world. 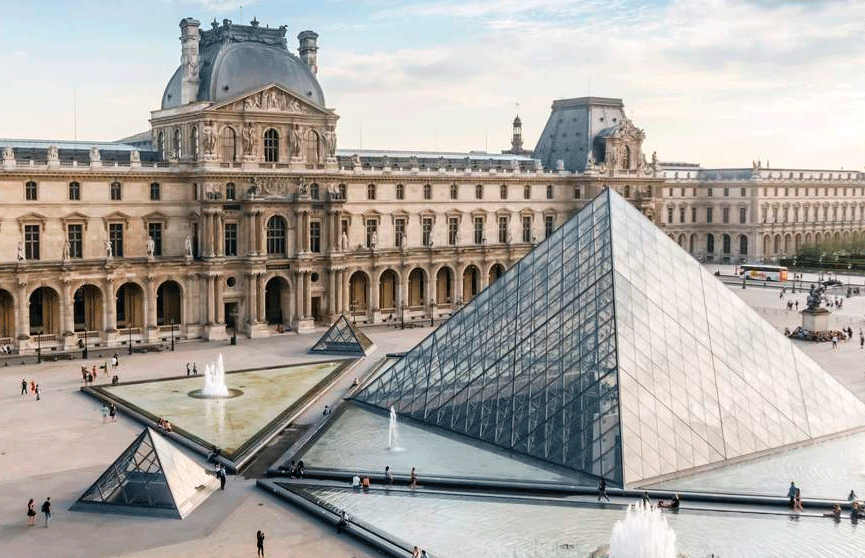 The Louvre Palace is a historical and architectural value, famous landmark of Paris. The Louvre was an ancient royal castle built in the late 12th to 13th century under Philip II. Today, the Louvre is a harmonious combination of past and present, the most culturally significant museum in the world (founded in 1793). The entrance to the museum is a glass pyramid, which has become itself a modern sightseeing of Paris. Every year, the museum is visited by about 10 million people. Its area is  73,000 square meters with more than 400,000 exhibits, and 35 th of which are on everyday display. 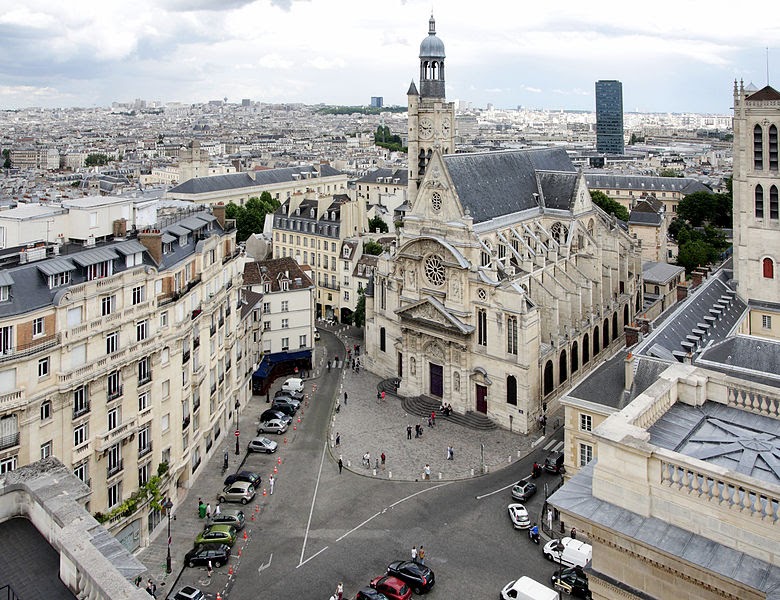 Popular with tourists all over the world, the Latin Quarter is one of the oldest urban areas, which grew up around the famous University – the Sorbonne. The area is located in the heart of the city, on the slopes of the Saint-Genevieve’ hills. In ancient times, Latin was the education’s language at the university, hence the name of the district. Now the Latin Quarter includes not only the Sorbonne, but also several other higher educational institutions.

The iconic student district has turned into one of the most cozy and beautiful historical corners of Paris, which is imbued with a special atmosphere. The main feature of the district is a mixture of epochs and cultures: Medieval Paris, Ottoman’s wide boulevards and narrow old streets, the majestic Pantheon and small bistros, the Sorbonne University and the Hemingway House, the Luxembourg Palace and numerous bookstores and cafes. Sothe Latin quarter has many points of interests which you should visit by your own feet. 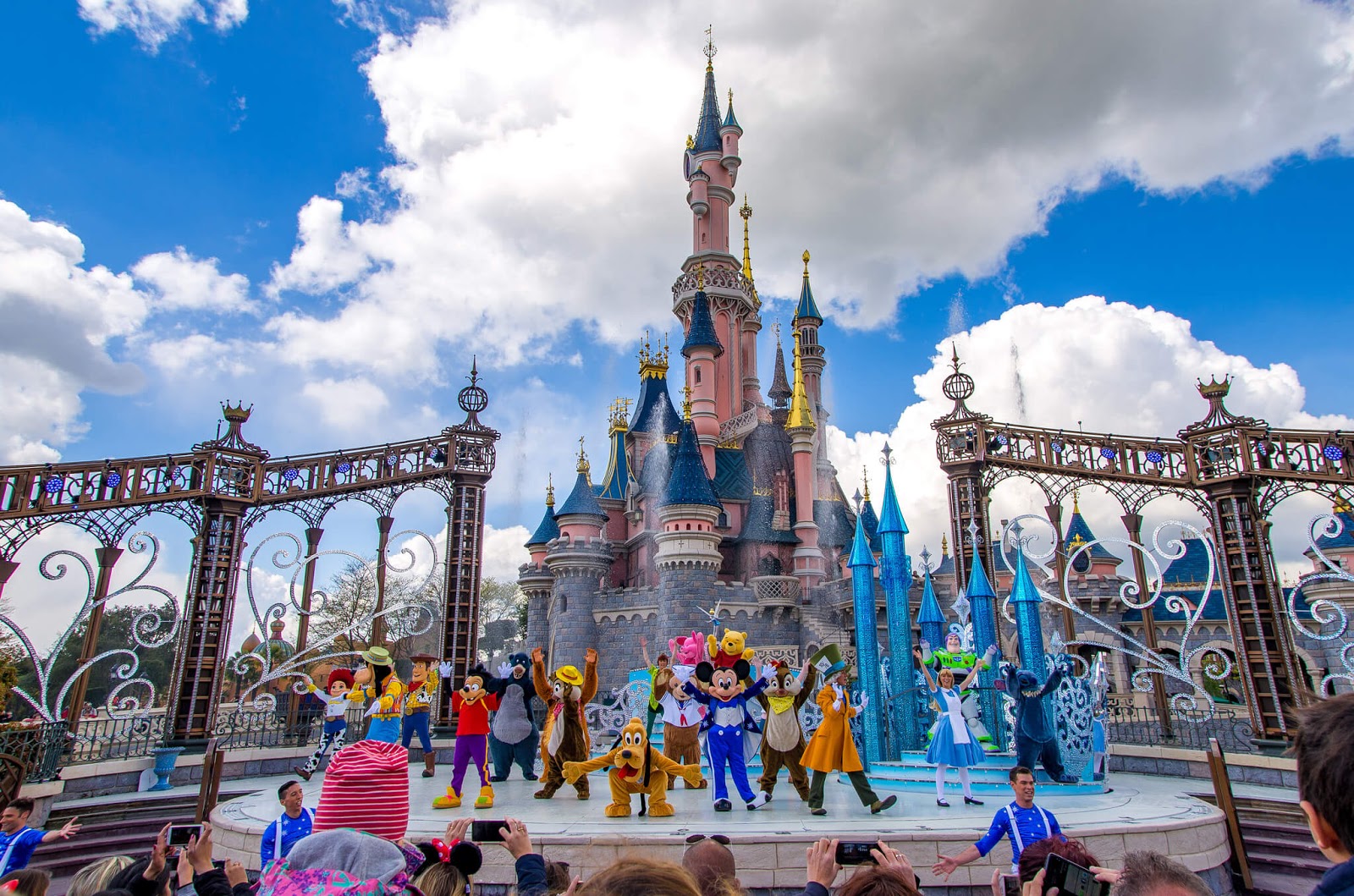 Disneyland in Paris is a place that children around the world dream about. The most popular entertainment park is located in the suburbs: 32 km from the French capital (Marne-la-Valais city) and occupies an area of almost 2 th hectares. Disneyland was opened in 1992 and today it is a complex including two theme parks: Disneyland Park and Walt Disney Studios Park. The last one is the entertainment area of Disney Village and a golf course. In addition, the Park is full of small shops, cafes, restaurants, souvenir shops and even hotels.

In terms of popularity, Disneyland is the same as the Eiffel Tower: on average, more than 12 million tourists from all around the world visit it every year. It’s better plan a visit in spring or early autumn, because the Park is completely crowded in summer. The park is connected to Paris by a railway and several automobile routes. 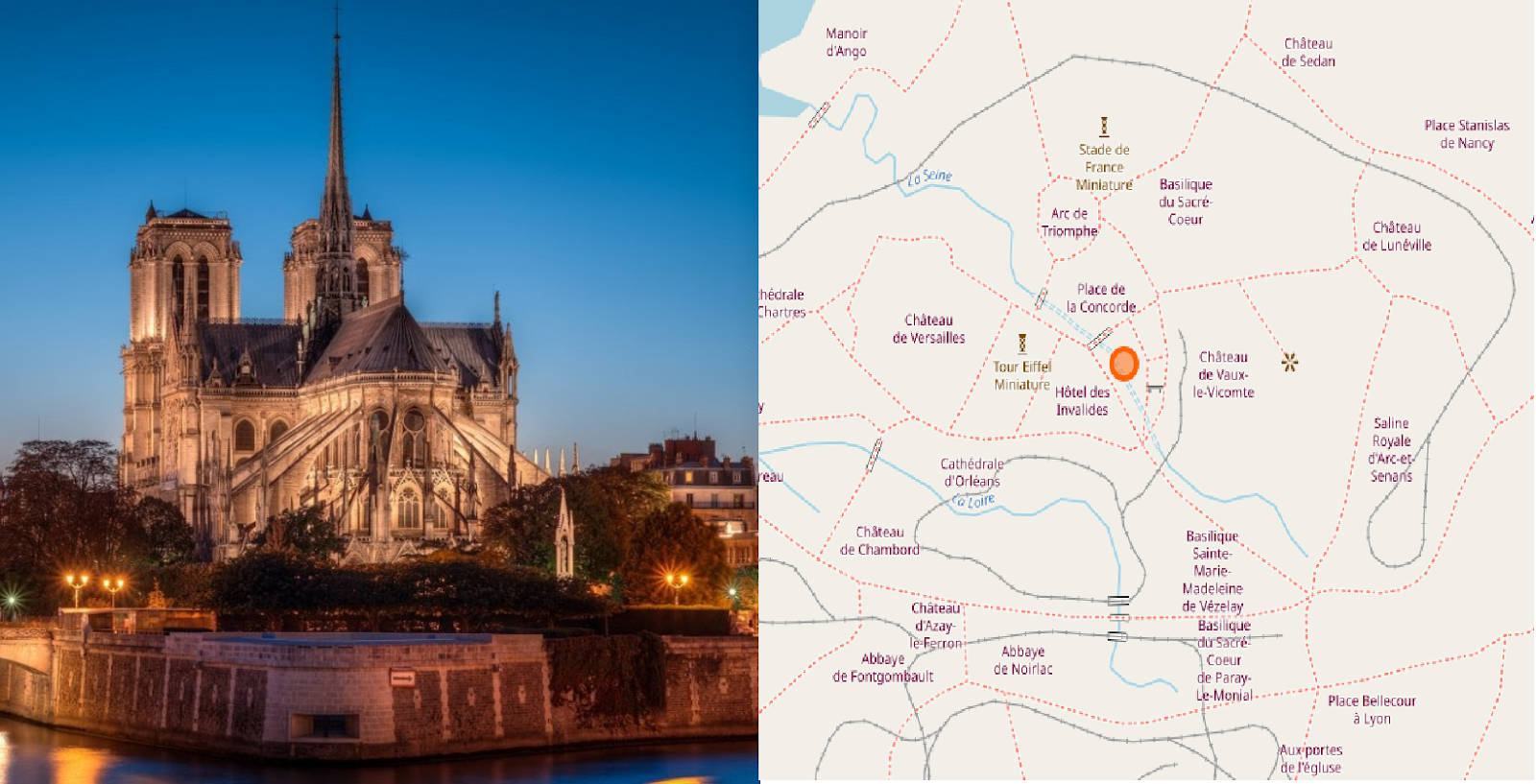 Notre-Dame Cathedral is a real masterpiece of Gothic architecture, which was founded in 1163 in the center of Paris on the island of the Seine river (l’ile de la Cité), which is the oldest part of the city. Here are collected unique Orthodox shrines – a fragment of the Holy cross and a Crown of Thorns. Being the greatest architectural and religious heritage, the Cathedral attracts a huge number of tourists. More than 13-14 million people visit this place every year. The majestic Catholic Church has a height of 35 m, a length of 30 m, a width of 48 m, and the height of the bell towers is 69 m. Notre-Dame de Paris has an upward-looking Gothic silhouette decorated with picturesque stained glass Windows and gargoyles. The Cathedral is very celebrated in art and is one of the most famous places of worship in the world. A place of incredible power, which keeps secrets and legends of the history of France.

Notre-Dame Cathedral became the geographical center of not only Paris, but also the entire country. This is where the so-called «zero kilometer» is located, from which all distances in France are counted. 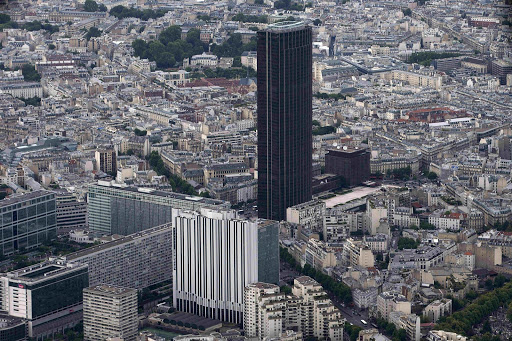 The Montparnasse Tower (MT) is a 59-story office building that is the only "glass and metal" skyscraper within the city of Paris. The tower was built from 1969 to 1972 on the place of an ordinary railway station on the left bank of the Seine (territory of the 15th arrondissement). This is the historical center where tourists often go for a walk. In addition to the ground height of  210-meter, there is also an underground one: it goes 70 meters down.

The covered observation deck is located on the 56th floor, and the roofless deck is located at the very top of the skyscraper. Its viewing radius is almost 40 kilometers, and, most importantly, it is the only place where you can see the Eiffel Tower from a bird's eye view. On the upper floors there are brand stores, conference rooms, cafes and a free exhibition of archival photos of Montparnasse. Until 2010, the MT was considered the tallest skyscraper in France, until the 231-meter-high Tour First building appeared in the suburban Paris quarter of the Defense.

How to get to Paris: train stations and airports

Paris is a major transport hub in the country. The capital of France has 4 international airports: 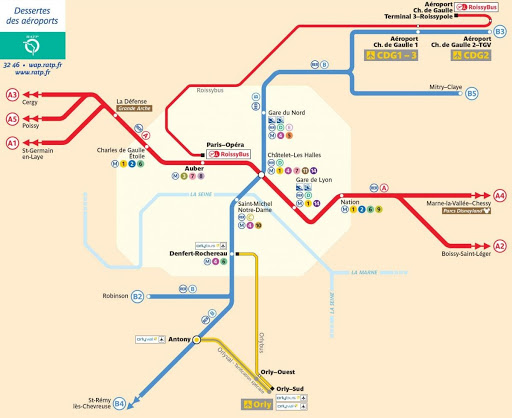 The French railway network connects Paris with almost all localities in the country (8 railway stations, 6 of which are equipped with high-speed TGV trains):

There are not less than 85 bus routes in Paris, with approximately 2,000 buses and 4 lines of the tram network.

The Paris tube (metro) consists of sixteen branches and more than three hundred stations, where the daily flow of people exceeds four million people. It is easy to calculate the time of moving the metro from one station to another: 2 minutes, which indicates the travel time between neighboring stations (short tube pass) and add 5 minutes for each transfer.

The RER (Réseau Express Régional) is a transport system that, unlike the metro, covers most of the city. RER extends its operations to two Paris airports (Roissy-Charles-de-Gaulle and Orly), Paris Disneyland and Château de Versailles. In addition, the network of these electric trains connects remote French suburbs with Paris.
The RER and the Paris Metro are integrated thanks to a transfer and payment system. The movement of trains on the RER lines on the left side. 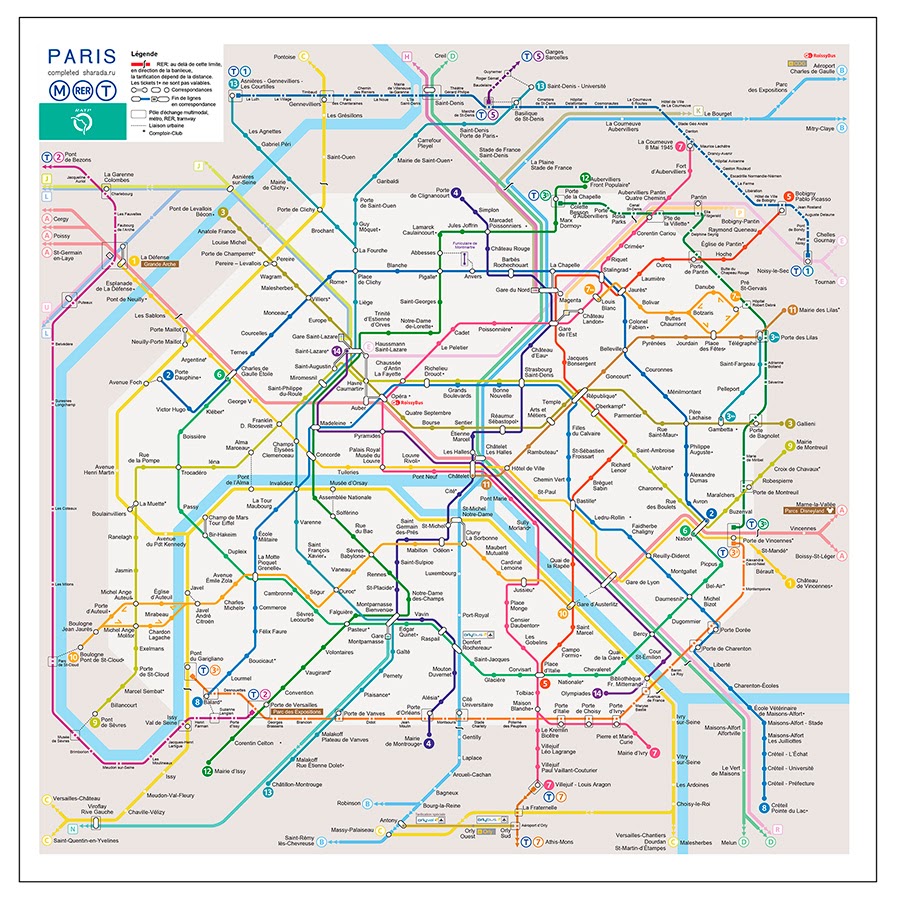 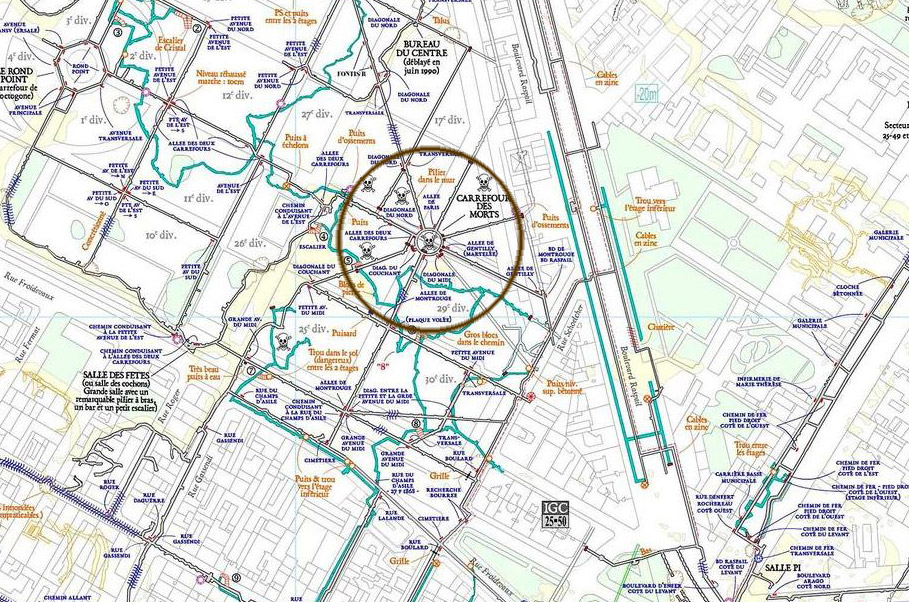 The reverse side of romantic Paris is the Parisian catacombs hiding under the city. This is an intricate network of underground tunnels and caves on the site of old limestone quarries, the length of which is about 300 km. The catacombs originate in underground stone-pit which were necessary for city buildings. In the period from the end of the XVIII to the middle of the XIX century, the remains of about six million people were brought here. The total area of the underground cemetery (ossuary) is 11 th m2. Today, some of the tunnels (about 1.7 km) belonging to the Carnavale Museum are open to the public. The examination trip usually takes about 40-45 minutes. Independent presence in the catacombs is prohibited.

The entrance to the catacombs is located in the pavilion near the Denfert-Rochereau metro station. The famous lion sculpture by the famous sculptor Bartholdi can serve as a reference point. 130 steps lead down to 20 meters in depth. The bottom is kept at a constant temperature of +14.

Many famous personalities found peace here, including the revolutionary Maximilian Robespierre; the philosopher, mathematician, physicist and great writer Blaise Pascal; the poet Charles Perrault and many others. 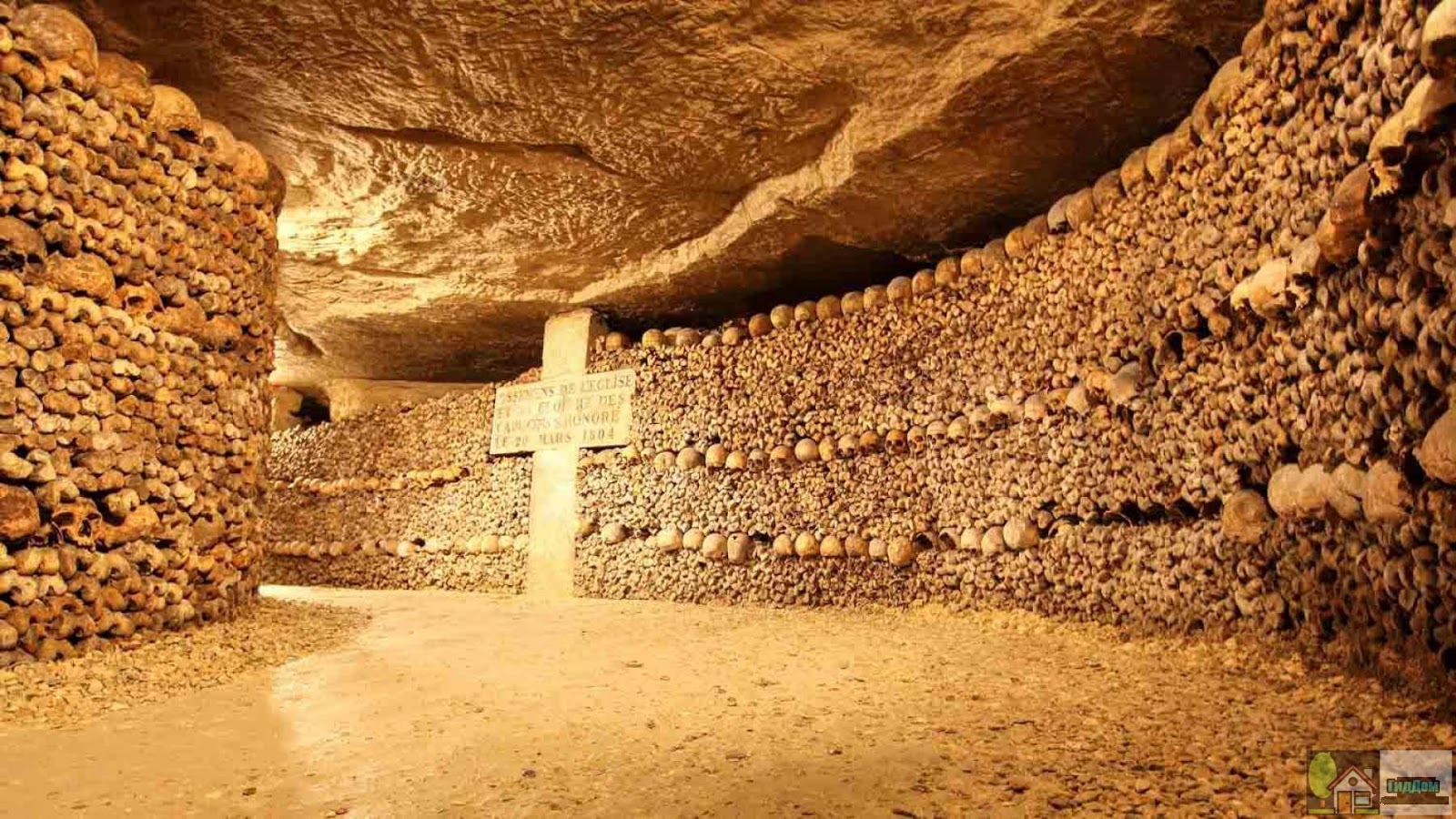