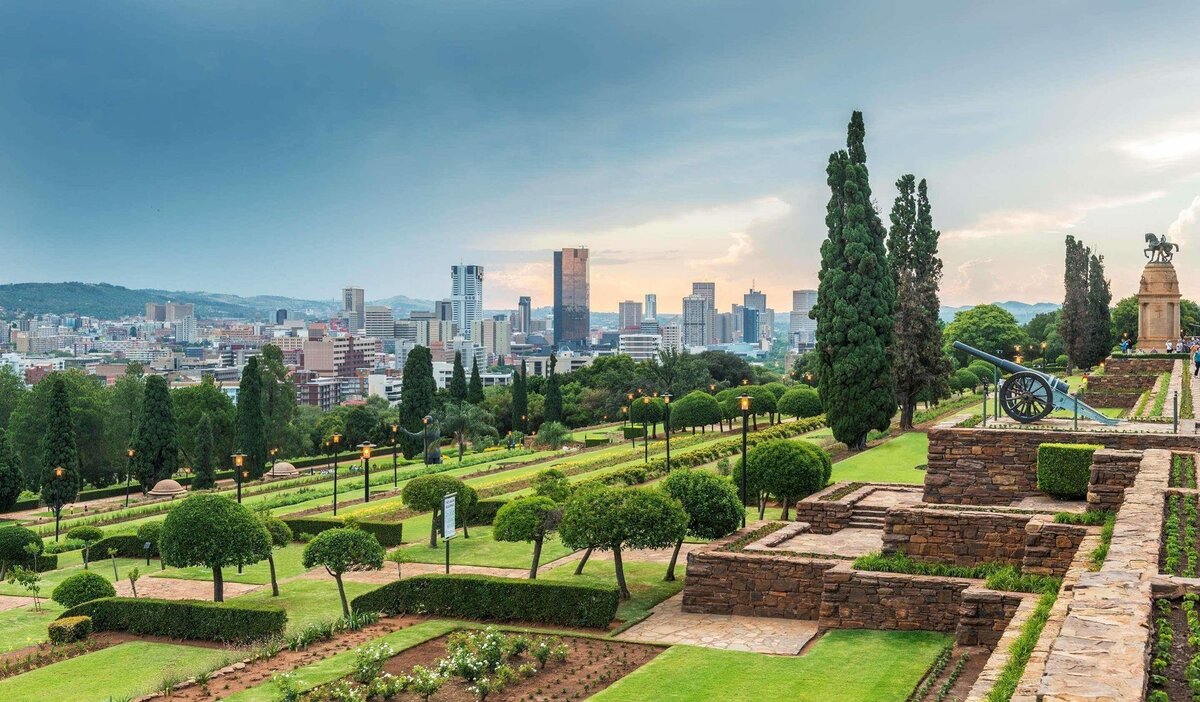 The city of contrasts is located in the northeastern part of the country in a mountain valley at an altitude of 1339 meters on the banks of the Apis River and covers an area of ​​just over 687 km². About 742 thousand people live in the city. Slightly more than half of the population of the capital are representatives of the white race (52.45%). In Pretoria, a variety of architectural styles coexist. Skyscrapers and entertainment centers in the center with slums on the outskirts.

Locals often refer to Pretoria as the “City of the Jacaranda”, as every October the streets are covered in purple flowers by 70,000 tropical jacaranda trees. Numerous tourists seek to get to the annual traditional colorful Jacaranda carnival in order to immerse themselves in the unforgettable atmosphere of the holiday and take part in the magnificent procession in honor of the coronation of Queen Jacaranda.

Pretoria climate and weather for today

Like most cities in South Africa, Pretoria has a humid subtropical climate.

The location of the city in a protected mountain valley determines the high average daily air temperature (+23.6°C).

The climate is characterized by:

The average annual rainfall in Pretoria is 661 mm.

The tourist peak is in April, May and September.

The most interesting sights of Pretoria 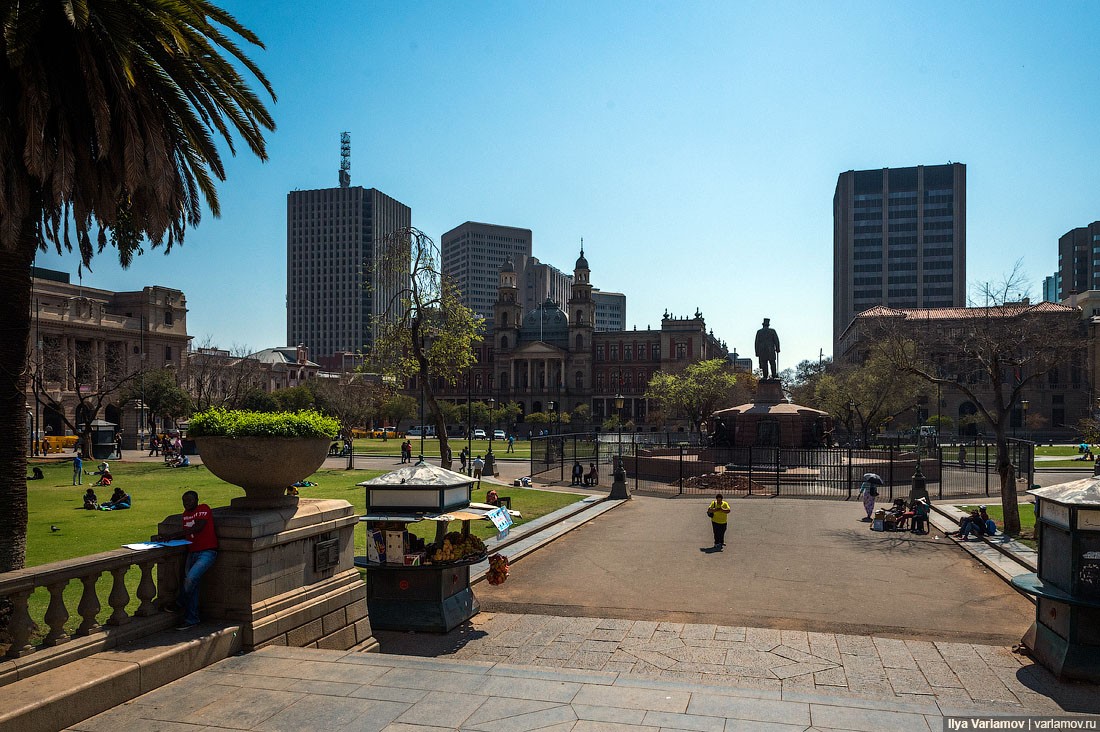 The architectural ensemble Church Square (Market Square) is the historical center of Pretoria and the focus of significant sights, as well as historical buildings of the Victorian era:

Previously, one of the important and central attractions of the Church Square was a cast-iron fountain, which was donated to the city by businessman Sammy Marks. The fountain was subsequently moved to the city zoo. 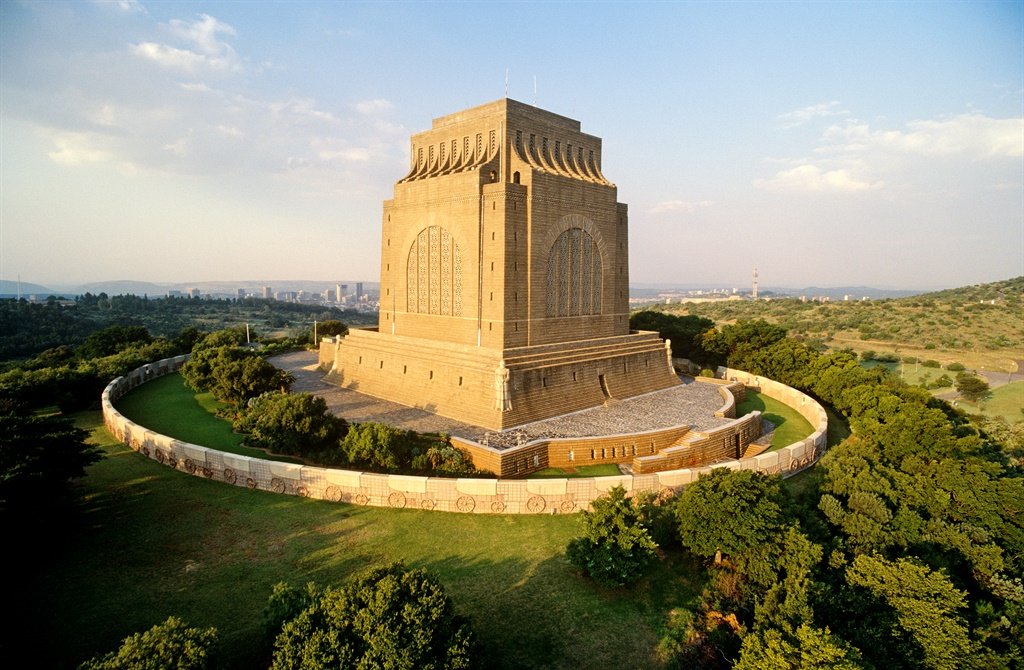 Monument to the Dutch-speaking Afrikaner settlers from the Cape Colony ("voortrekker"), who began the mass development of South Africa. It is located south of Pretoria. An impressive granite building (40x40x40) was erected on top of a hill, from which a panoramic view of the city opens. The opening of the famous monument took place in 1949.

Inside the Voortrekker Monument is a domed ‘Hall of Heroes’ with huge arched windows. The hall is surrounded by the world's largest marble frieze, consisting of 27 bas-reliefs with scenes from the history of African exploration. In the center of the hall there is a cenotaph, the inscription on which at noon illuminates a ray of the sun, penetrating into the room through a hole in the domed roof of the monument.

You can get to the top of the monument by elevator. 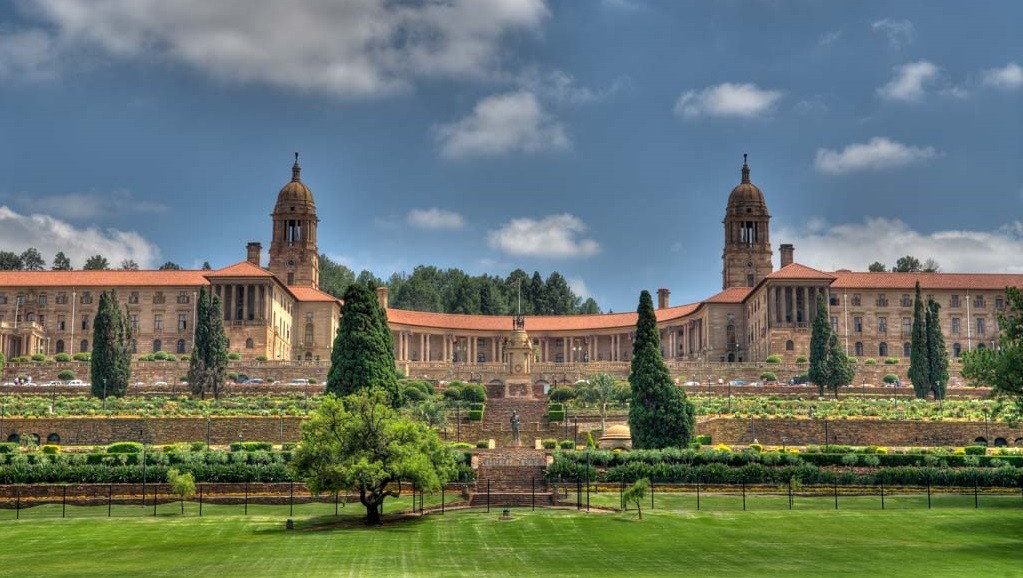 The Union Buildings rightfully bear the title of the most important buildings of Pretoria, as they are the official residence of the government of South Africa. The offices of the President, the Government and the Ministry of Foreign Affairs are located here.

The architectural complex ‘Allied Buildings’ is located on the highest point of Pretoria on the top of the Meintjieskop hill on the site of an old quarry. The building in the form of a semicircle is made in a monumental English style of light sandstone designed by the architect Sir Herbert Baker. The total length is 285 meters and the height is 60 meters.

The political center of the country is surrounded by beautiful terraced gardens and lawns, where monuments, statues and memorials are placed:

The symbol of South Africa's democracy is one of the country's most important tourist attractions. 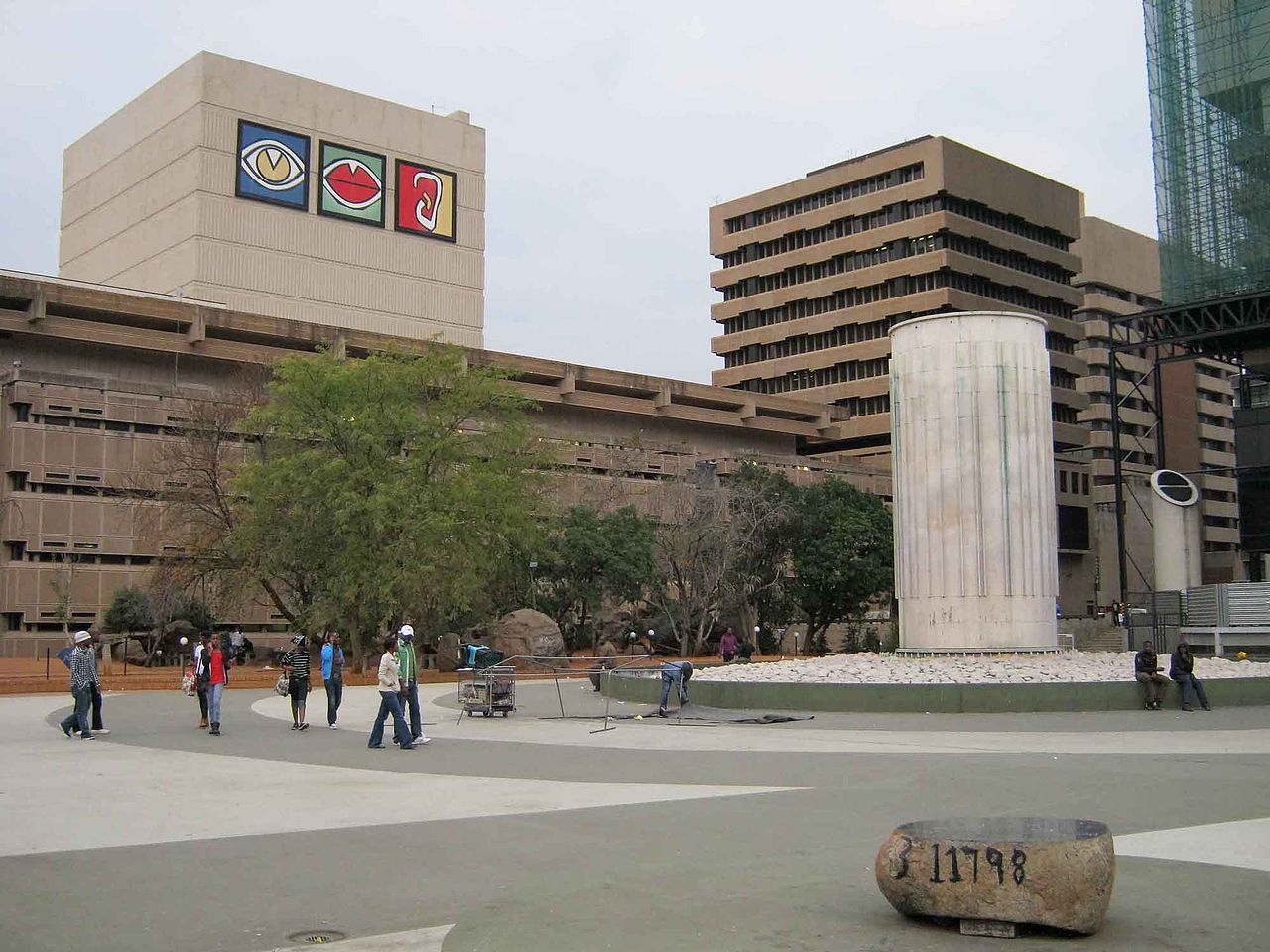 The South African State Theater is the largest theater complex in Africa (over 72,000 m2). The complex is built in a modern style and features original architectural solutions. Designed for 2,700 spectators and equipped with several thematic halls:

Currently, the theater venue, in addition to staging performances, musicals and ballet, provides its halls for ceremonies, fashion shows, receptions of delegations, conferences and festive events. 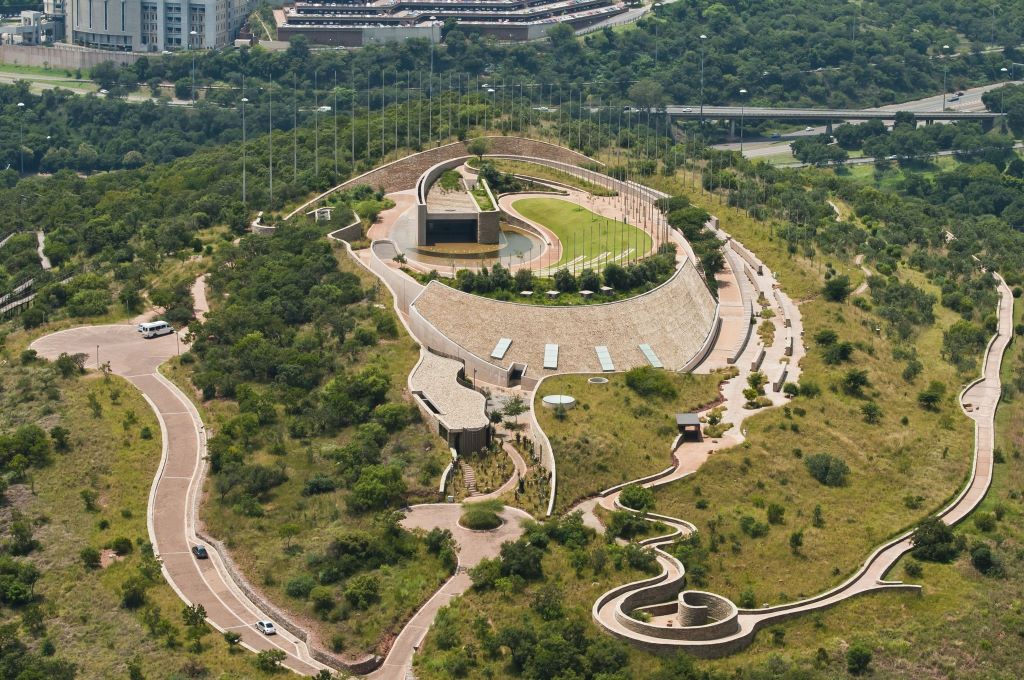 Pretoria Freedom Park is a memorial with unique architecture, located on a hill in the Salvokop area. The hill offers a magnificent panoramic view. The complex was opened in 2007 at the initiative of Nelson Mandela: the first president of South Africa and an active fighter against apartheid.

Freedom Park commemorates those who died during the First and Second World Wars, who fell in battle on South African soil, and during the authoritarian political culture of apartheid.

On the territory of the memorial complex (about 52 hectares) are:

Freedom Park is one of the most important modern historical monuments in South Africa, designed to strengthen the national consciousness of the people. 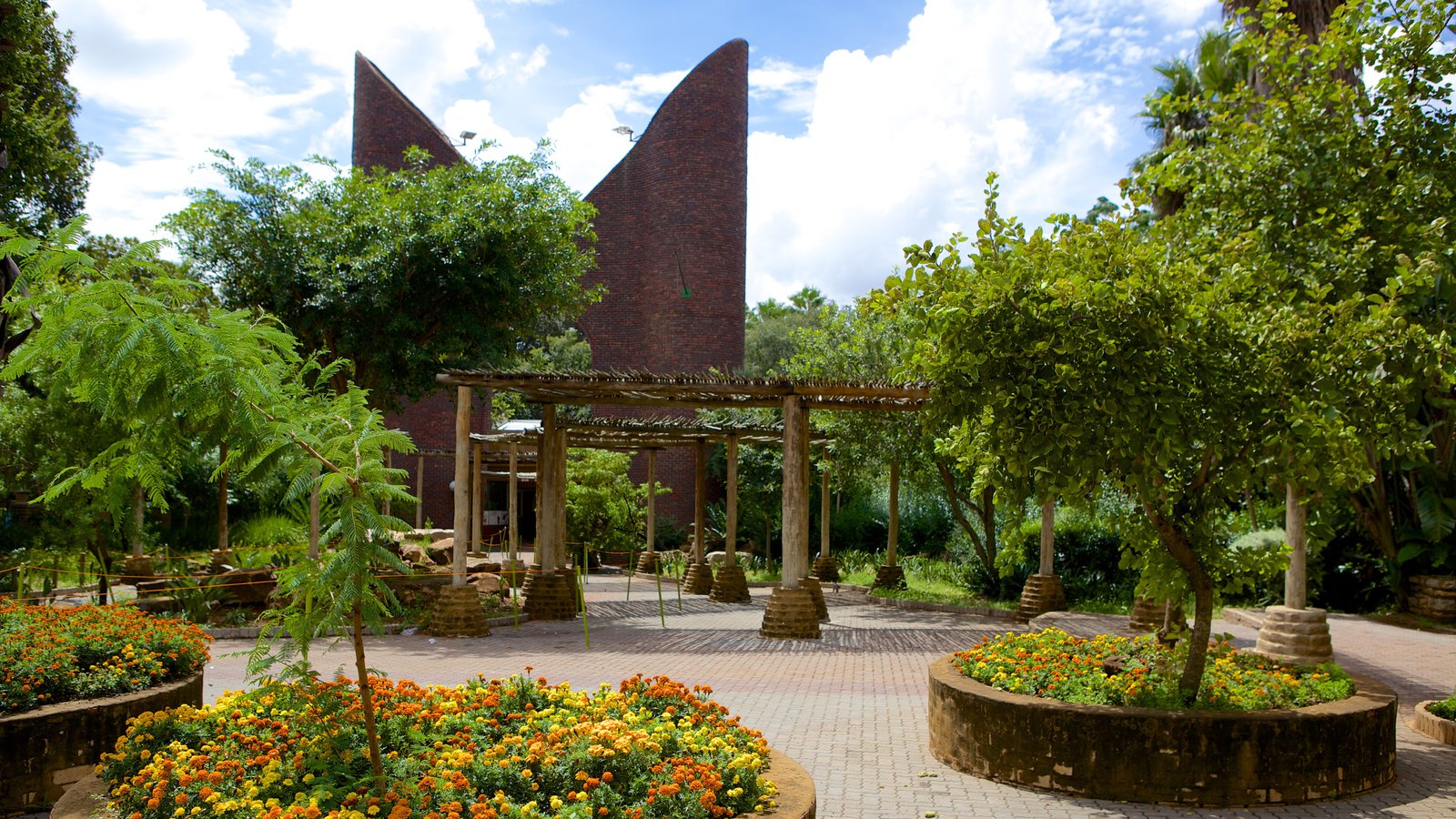 The Pretoria National Zoological Park was founded at the end of the 19th century by the Dutch physician Jan W. B. Gunning. Today it is one of the largest zoos in the world. The 85 ha Pretoria Zoological Park is part of the South African National Biodiversity Institute. More than 700 species of animals live in it, most of which were born in captivity (140 species of birds: birds of prey and waterfowl; 140 species of mammals: monkeys, lemurs, cheetahs, rhinos, giraffes, elephants, kangaroos, lions, tigers, and many others.). On a permanent basis, the zoo has a scientific program for the conservation of rare species of animals.

The Zoological Park is divided by the Monkey River into two parts: flat and hilly. Pedestrian paths (with a total length of 6 km) make the most remote corners accessible, and golf carts provide fast and comfortable movement around the territory. A cable car connects the entrance to the park area to the top of the hill, providing visitors with stunning views of the animal enclosures.

In addition, the zoo has:

Every year more than 600 thousand guests come to get acquainted with the world-famous South African zoo. Exciting excursions and programs are held regardless of the time of year. 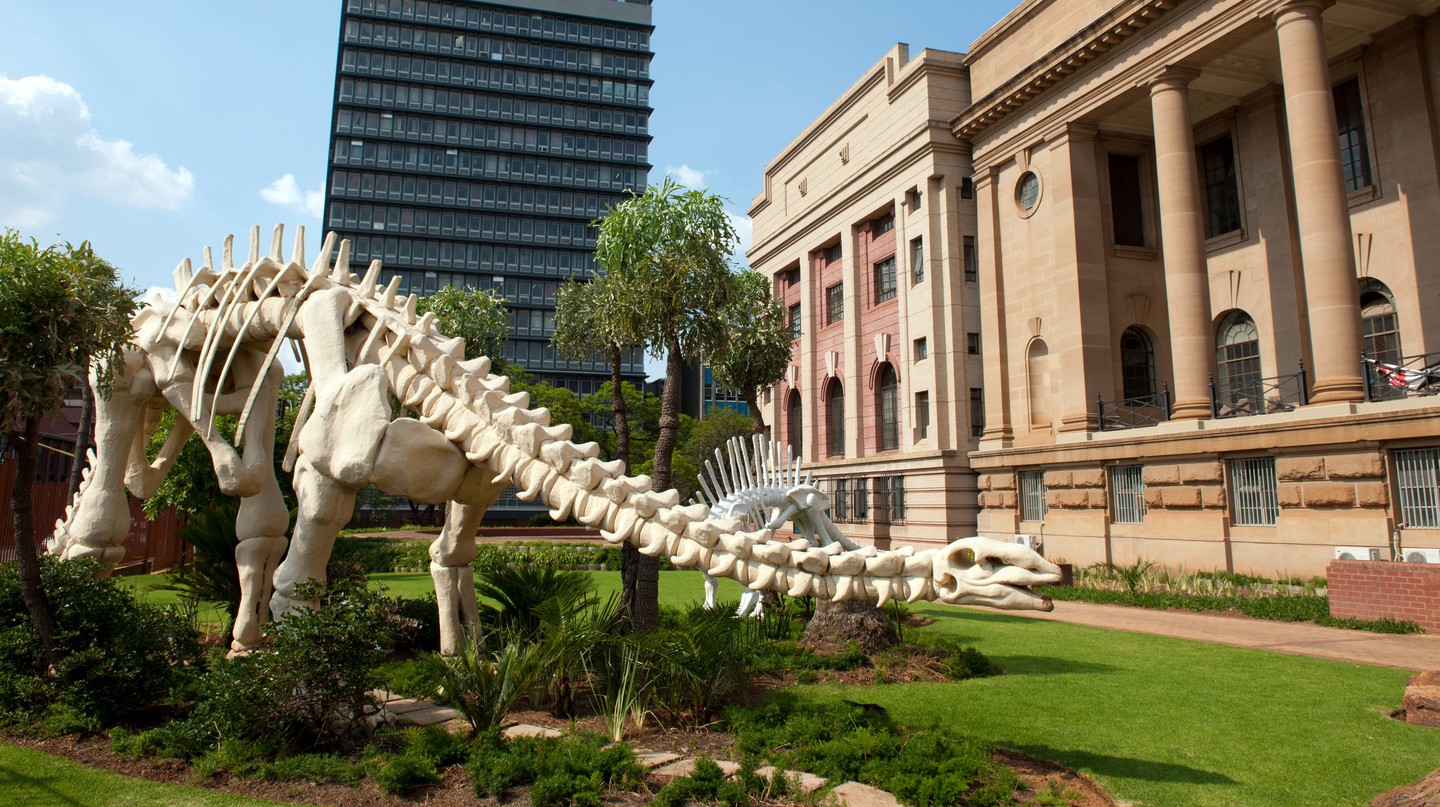 The Ditsong National Museum of Natural History was founded in 1895 as a State Museum, and since 2010 it has become part of the association of eight museums in the vicinity of Pretoria and Johannesburg (Ditsong Museums).

The museum contains unique collections with rare exhibits and artifacts:

Today the museum is the world's largest center for the study of South African history and nature.

How to get to Pretoria: train stations and airports

The largest and busiest airport terminal in the country. Located 24 km east of the center of Johannesburg. Serves international and domestic flights. 6 terminals and 2 runways (one of the longest in the world, over 4400 m). Passenger traffic is over 20 million people.

There is a museum on the territory of the airport (South African Airways Museum.)

Pretoria Railway Station is the central station of Pretoria, the terminus of suburban metro rail lines, as well as a stop on the intercity routes Johannesburg - Polokwane and Johannesburg - Nelspruit.

Pretoria Central Station is also the last northern station of the world-famous blue train, which runs for about 1600 km between Pretoria and Cape Town. 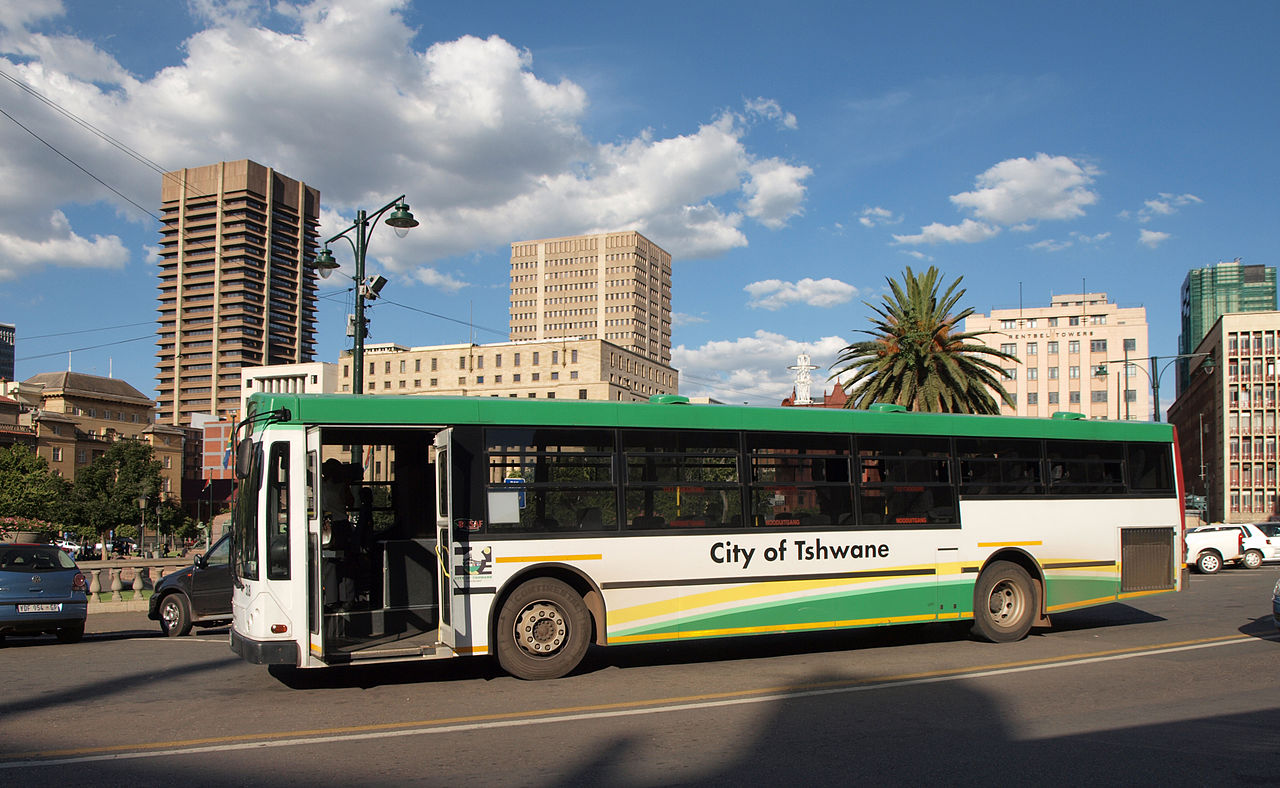 Public transport in Pretoria is represented by: 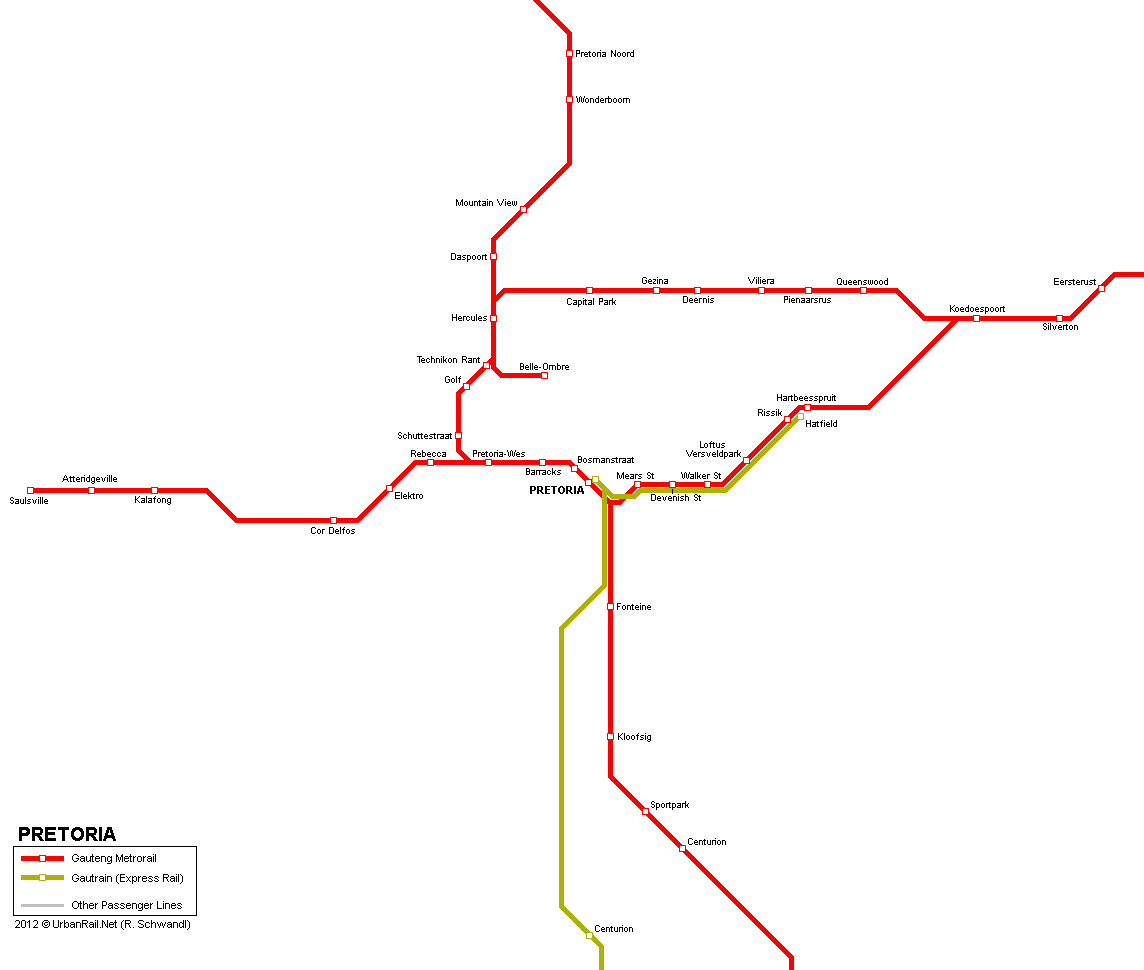 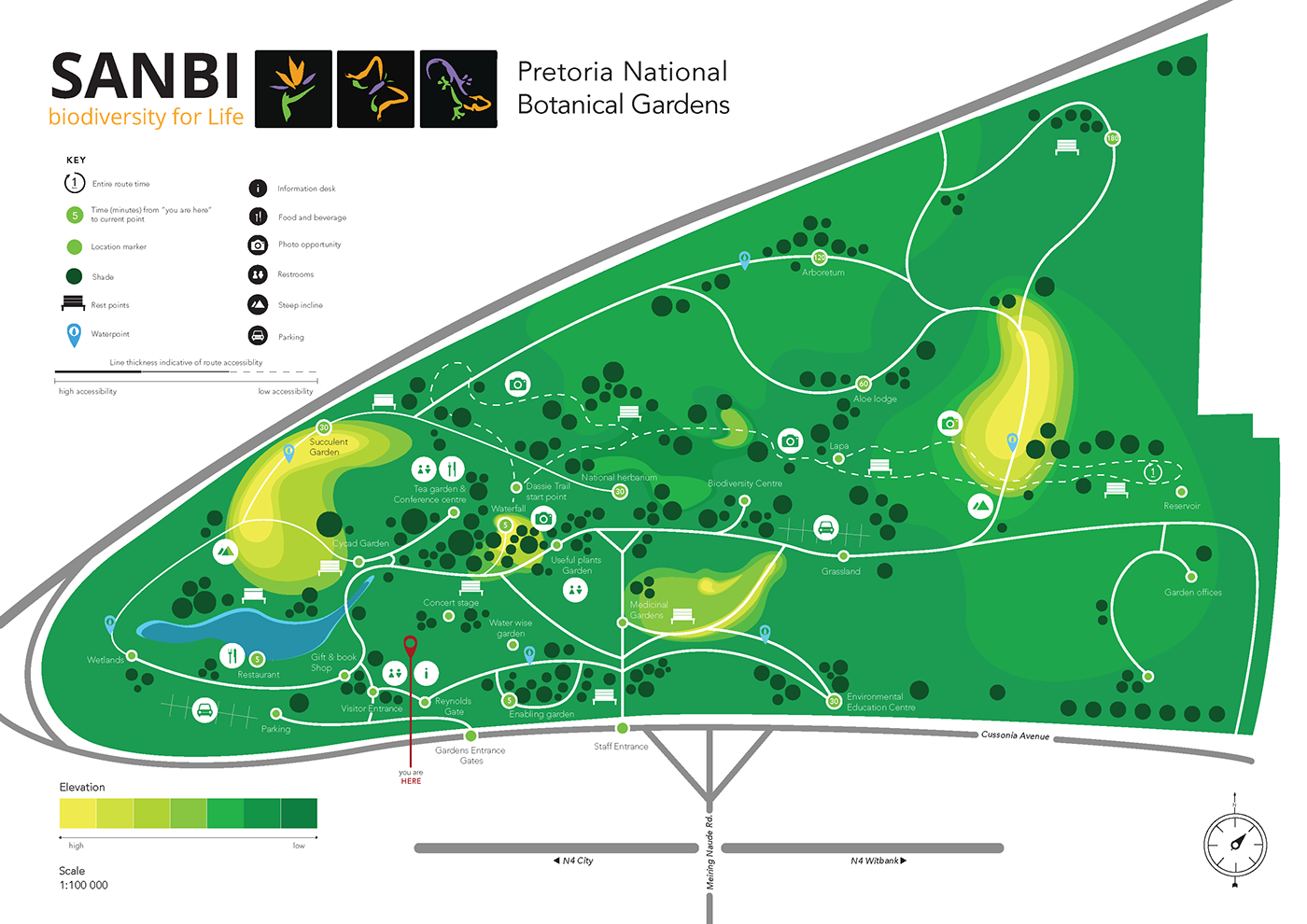 The Pretoria National Botanical Garden, founded in 1946 and which began its existence with an alley of wisteria trees (Bolusanthus speciosus), is now open to the public daily and is one of the favorite places for locals to relax. A picturesque garden with an area of ​​76 hectares frames the central mountain range (Magaliesberg Ridge). It houses the headquarters of the South African National Biodiversity Institute.

Hiking trails run through the entire territory of the garden, allowing you to get acquainted with the flora and fauna of this amazing place. Most of the territory is devoted to South African plants: here you can see all kinds of flowers and more than 50% of South African tree species. The National Botanical Garden is home to about 200 species of birds, several species of reptiles and small mammals.

In the central part of the garden are located:

In the western part are:

The eastern part of the botanical garden is interesting for the Dassi walking route, which runs along the ridge, as well as natural meadows and an arboretum.