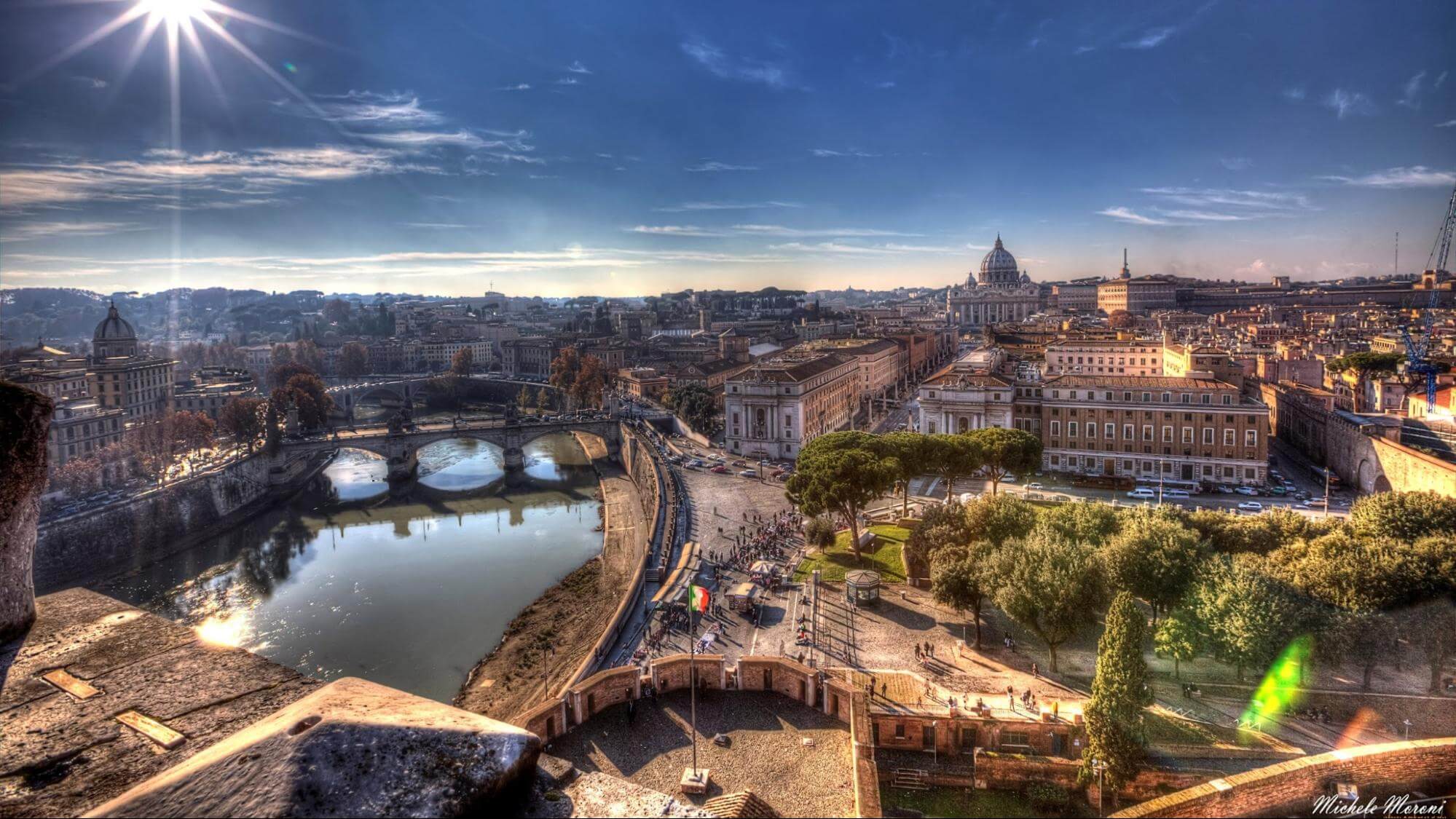 Rome is one of the oldest cities in the world. It's located on the legendary seven hills on the Tiber River in 25 km from the Tyrrhenian Sea coast. The city with a population of about 2.9 million people covers an area of ​​1287.36 km². The population density is 2234 people. / Km².

Several foundations of Rome were calculated back in the 1st century BC, but the date was officially approved on April 21, 753 BC.

Rome occupies a special place among European capitals, being the cradle of Western civilization. This city is a symbol of the powerful Roman Empire, which conquered the Mediterranean Sea. A very beautiful and interesting city received a second name - "Eternal", thanks to its rich and long history. Rome has a unique concentration of ancient buildings, sacred monuments and cobbled streets. The historic center of Rome is listed as a UNESCO World Heritage Site. More than 3 million foreign tourists visit Rome every year.

Rome climate and weather for today

In many ways, the weather in Rome is determined by the winds: summer heat comes with dry and hot sirocco from Africa, cold winds from the Atlantic bring rains in autumn, and in winter Tramontana reigns with a strong northerly wind. But winter is still mild and rather rainy (average daytime temperature + 10 ... + 12 ° С), and summer, as a rule, is long and hot (average daytime temperature + 27 ... + 30 ° С).

The tourist season starts in mid-spring and ends in October, with a slight decline during the hot summer months. May, the second half of September and early October (velvet season) are ideal for visiting the city. There is also a surge in tourist activity during the Christmas holidays.

The most interesting sights of Rome

The invaluable historical and cultural heritage of Rome attracts millions of tourists, at every step of which unique architectural and cultural masterpieces await.

Colosseum and Arch of Constantine 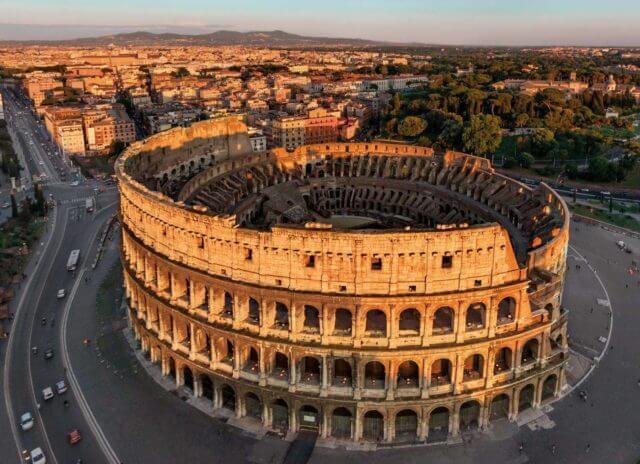 The Colosseum (Flavian Amphitheater) is the most famous and one of the most grandiose structures of the Ancient World, which has survived to this day. The date of foundation is considered to be 72 AD. The construction of the largest amphitheater of the ancient world lasted 8 years (capacity is 50 thousand people). The grandiose structure has no equal in the world: the height of the walls made of travertine marble is from 48 to 50 meters, the length of the outer ellipse is 524 m, the length of the arena is 85.75 m, and the width is 53.62 m. The architectural and logistic solution for the construction of the Colosseum is still used today during the construction of stadiums. The Colosseum is a symbol of Rome and one of the most popular tourist attractions. In 2007 it was recognized as one of the Seven New Wonders of the World. In 2017 the Colosseum received more than 7 million people, topping the list of the most visited attractions in Italy. 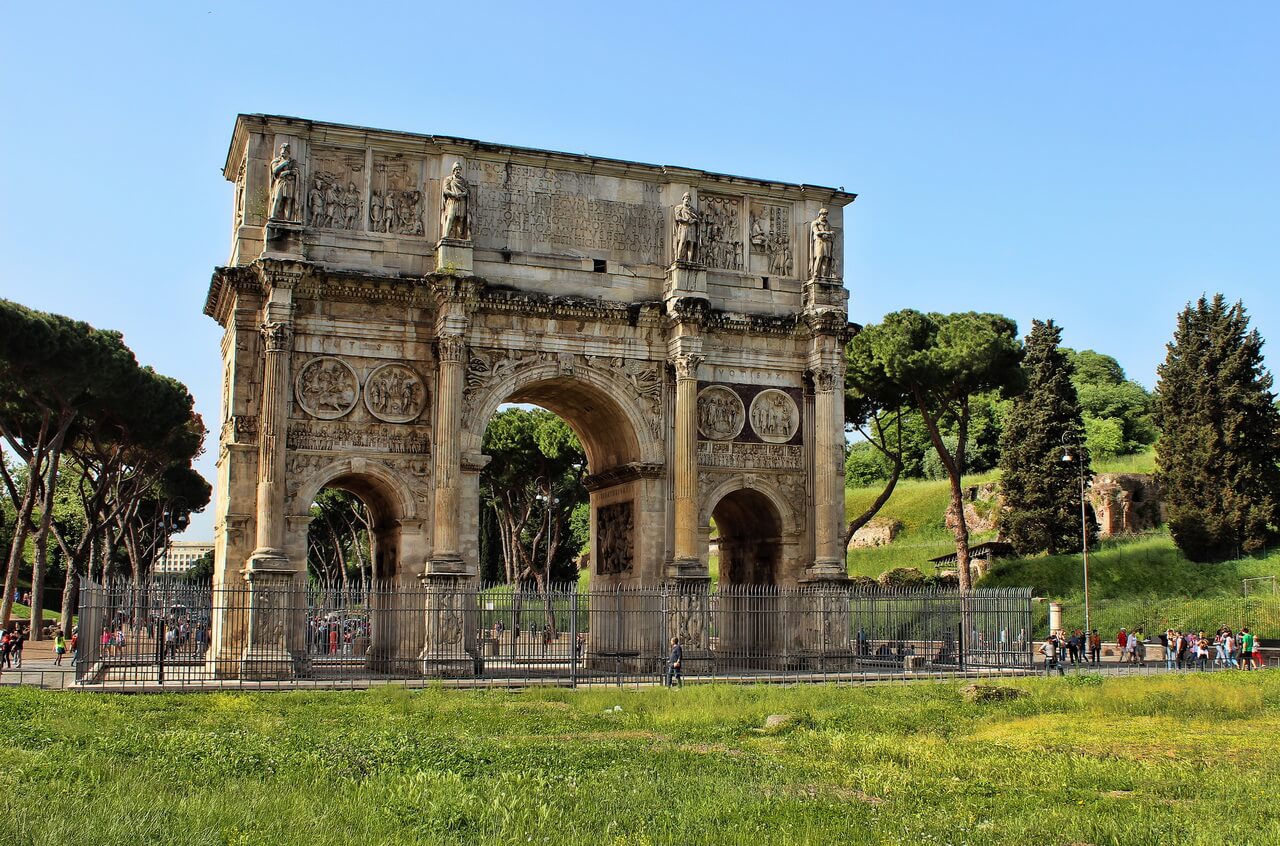 The Triumphal Arch of Constantine was built of marble blocks in 315 to commemorate the victory of Emperor Constantine in the Battle of the Milvian Bridge. Located between the Colosseum and the Palatine. The arch consists of three through spans and has a height of 21 m, a width of 25.7 m and a depth of 7.4 m. The facade, external and internal walls are decorated with bas-reliefs. 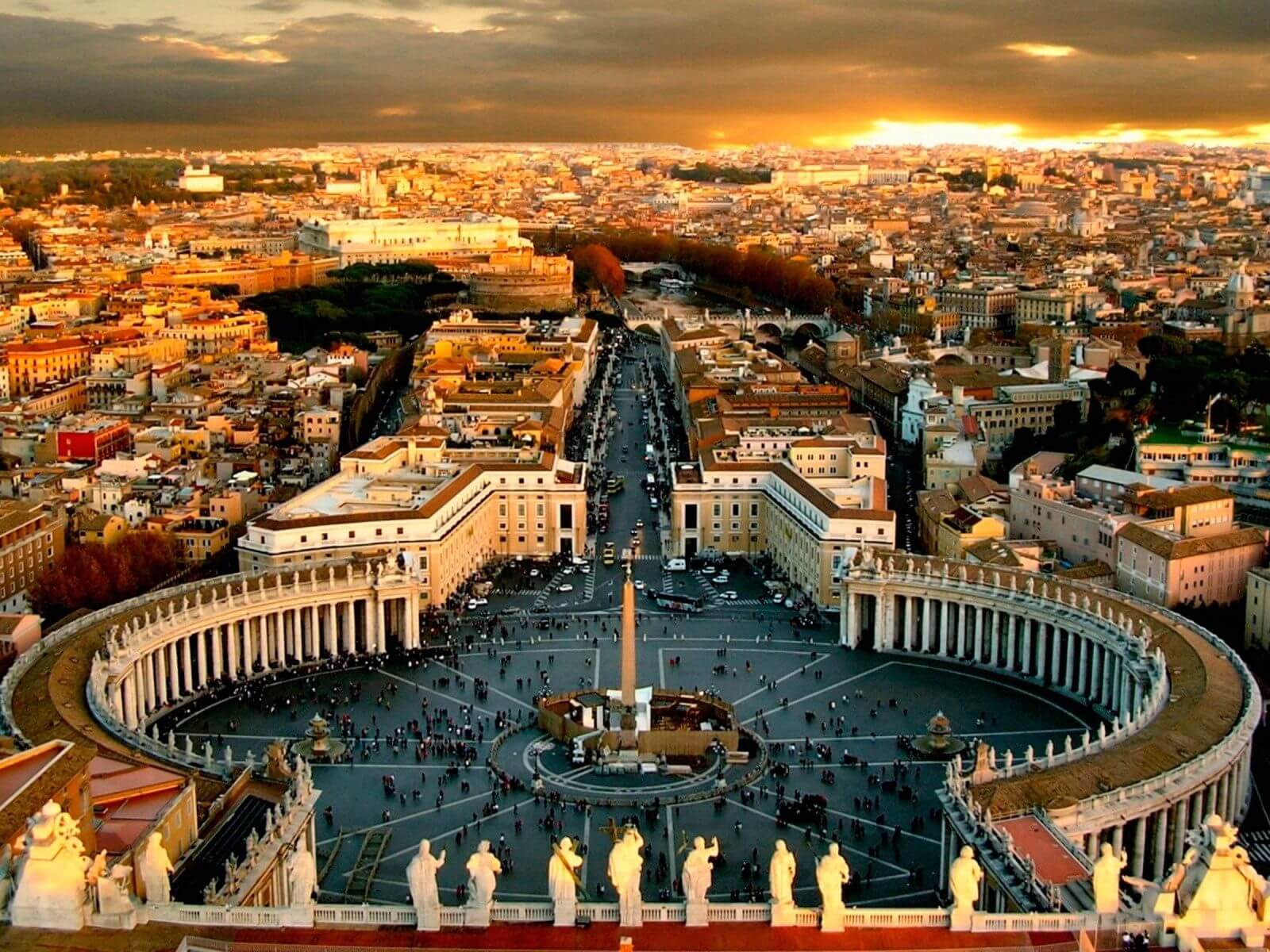 The Vatican is the smallest officially recognized state in the world, an enclave state within the territory of Rome. The Vatican has a special status as an auxiliary sovereign territory of the Holy See and the seat of the highest spiritual leadership of the Roman Catholic Church.

The city-state is located on the Vatican Hill in the northwestern part of Rome, a few hundred meters from the Tiber. The total length of the state border is only 3.2 km, and the area is 44 hectares. The Vatican is a highly developed state with a population of 825 people, the overwhelming majority of whom are representatives of the clergy of various levels.

The center of the Catholic faith is rich in wonderful museums and architectural monuments. St. Paul's Cathedral (386) is a real masterpiece and is on the list of World Heritage of Humanity. The Vatican is one of the most popular tourist destinations in Rome: about 5 million people visit it annually. 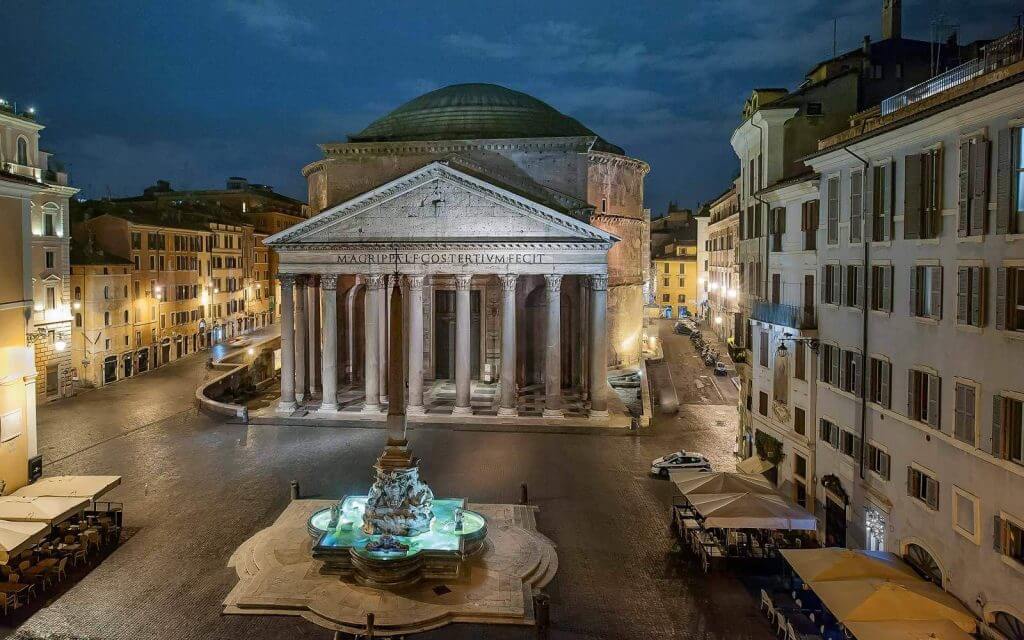 One of the main attractions in Rome is the Pantheon, built between 118 and 128 AD. The only temple that has survived to this day almost in its original form. From the Greek “pantheon” is “the temple of all gods”. The Roman Pantheon is the world's largest domed structure (the diameter of the unreinforced hemispherical dome of the Pantheon is 43.57 m, the height is 22 meters). In the center of the dome there is a round hole with a diameter of 9 meters (oculus), the so-called eye of the Pantheon.

Unique frescoes, statues and bronze decorations make the interior of the temple as impressive as its mighty exterior. A masterpiece of ancient Roman architecture and engineering. It is the most visited monument in Italy, admiring 7 million tourists every year. 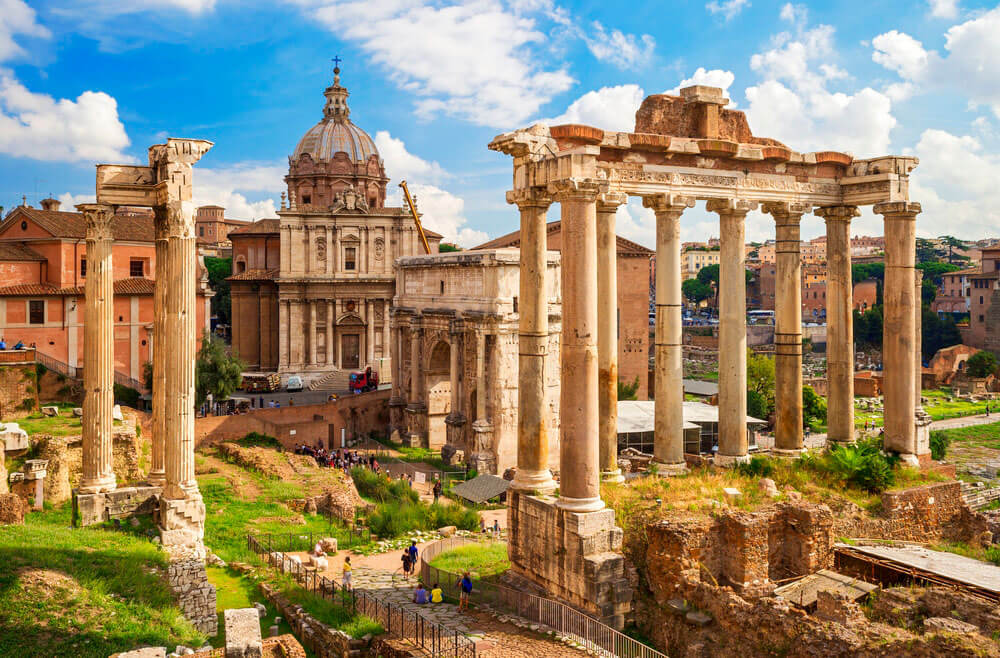 The Roman Forum is one of the oldest places in Rome, and the center of the religious and political life of the city in the past. Today it has become an Open Air Museum. These legendary ruins are located between the Colosseum and Piazza Venezia. One part of the Forum was intended for trade, the other for holding religious holidays, public ceremonies, holding elections and sentencing convicts. Initially, the forum included more than 10 buildings, most of which were destroyed over time. The Basilica of Maxentius-Constantine is the largest building ever built in the Roman Forum. It was a completely new architectural solution in terms of both size and construction. Today, only the north nave with three huge arches remains, and the only one of the 8 columns that survived an earthquake was moved in 1614 to the square of Santa Maria Maggiore.

The heart of Ancient Rome is a very beautiful and symbolic place where the most important decisions were once made. This is the second most important landmark in Rome. About 6 million tourists visit the Forum annually.

The Trevi Fountain became the largest fountain in Rome (height 25.9 m; width 49.8 m), built in 1732-1762 in the central part of Rome, on the western slope of the Quirinal Hill. The architectural masterpiece is located at the crossroads of three roads and adjoins the facade of Palazzo Poli, creating a single whole with it. This unique composition is made in the Baroque style. Many tourists come to see with their own eyes the grandeur and power of one of the most beautiful fountains in the world. And following the belief, throw a coin at him to return to Rome again. In 2017, utilities "caught" million euros.

The capital of Italy is served by two international airports: Fiumicino and Ciampino, located in the suburbs.

Fiumicino International Airport, named after the famous Italian painter and inventor Leonardo da Vinci (1961) is the main air gate of the capital. It is located in the small town of Fiumicino in 30 kilometers southwest of the center of Rome. It ranks sixth in terms of occupancy in Europe (the annual passenger traffic is about 43 million people).

Ciampino is Giovanni Battista Pastine Airport, located in the province of Lazio in 15 kilometers from the capital. The airport opened in 1916 and until 1961 it was considered the main airport in Rome. Ciampino serves both international and domestic flights.

Termini Station (modern look since 1950, station since 1863) is the main train station in Rome with a passenger traffic of over 150 million people and ranks 6th in Europe. The territory of the main station (225,000 m²) accommodates 32 platforms. Termini is not only a railway station, but also a major transport hub.

The second most important railway station Tiburtina (1866) serves as a connection between the southern and northern parts of Italy.

Public transport in Rome is represented by metro, buses, trams, one trolleybus route and taxis.

Rome's underground transportation system opened in 1955. The scheme of the Roman Metro (Metropolitana) consists of three main lines: A (orange) includes 27 stations; B (blue) includes 22 stations and is the first in Rome; and C (green), connecting the suburb with the city. Line B1 of the Rome metro opened in 2012 as an offshoot of line B. The modest coverage of the city with metro lines (the total length of the tracks is only 60 km) is explained by the large number of ancient archaeological values ​​that prevent the construction of new lines. The operating stations of the C line are also museums. The Rome metro is a cheap, but not always convenient form of transport. 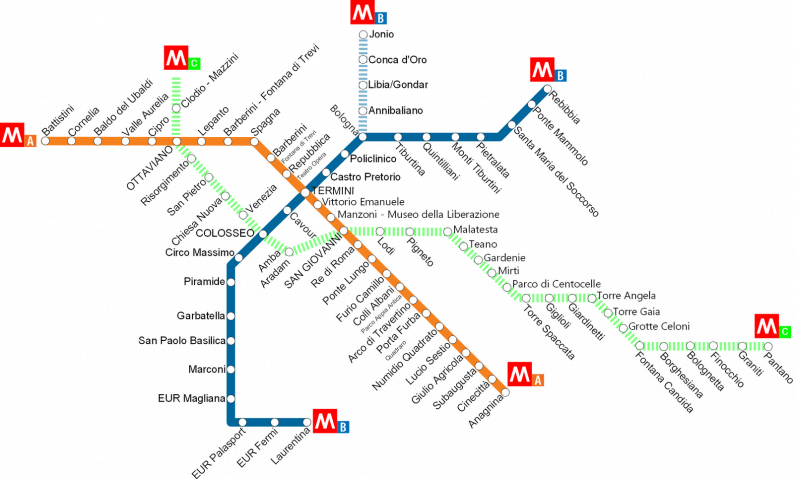 Today in Rome, there are only 6 tram lines, which are served by two types of Roman trams: old colorful and new modern CityWay format.

There is also one trolleybus route in the city. 90 Express (part of the route the trolleybus runs "by wire", and part of it runs on batteries).

The bus is the most convenient transport in Rome, as it has a developed network of routes with a large coverage of the capital's territory and runs quite often. There are two types of buses in the Roman car park: bus and electro bus (electric bus). About 300 routes.

The fall of Rome on the map 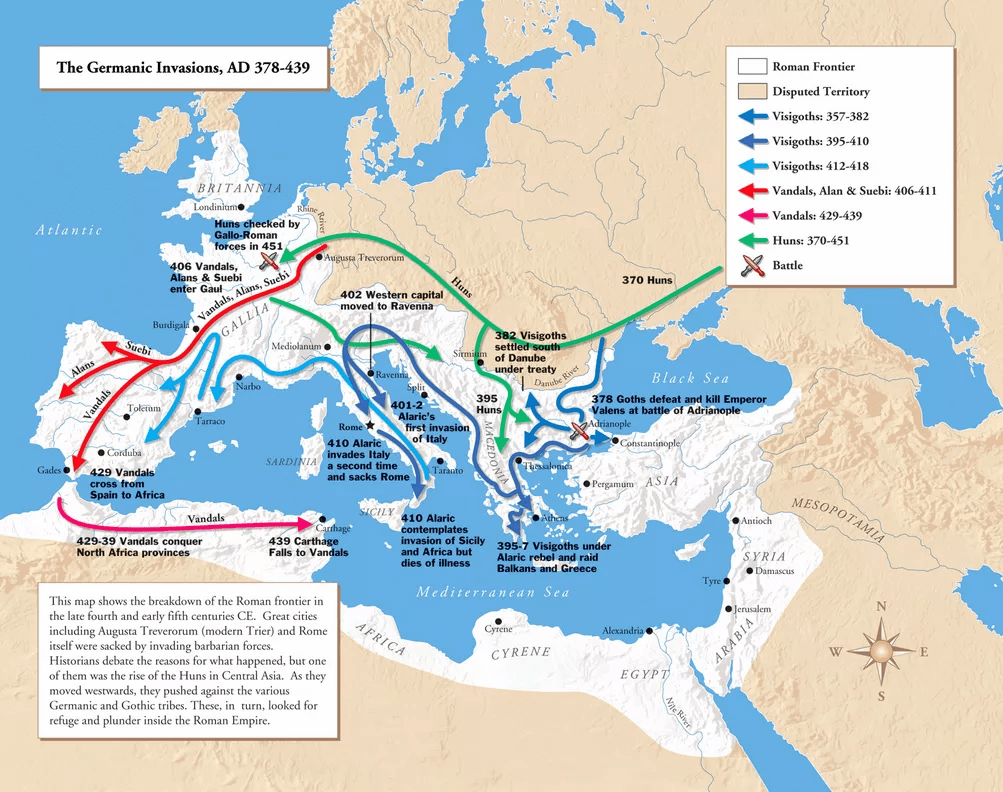 The powerful world empire was destroyed, first of all, by internal and not external forces. The despotism of the emperors gradually led to the decline of the ancient culture and economy of the state. The army become an instrument of maintaining power, ceased to be a defense for the country. The spread of Christianity shifted its priorities. During the period from 235 to 284, the frequent change of emperors finally shook the empire, making it an accessible prey for the barbarians. The last emperor of the Western Roman Empire was overthrown on September 4, 476, which ended the centuries-old domination of Rome. The year 476 is Accepted as the border dividing the ancient and medieval eras.