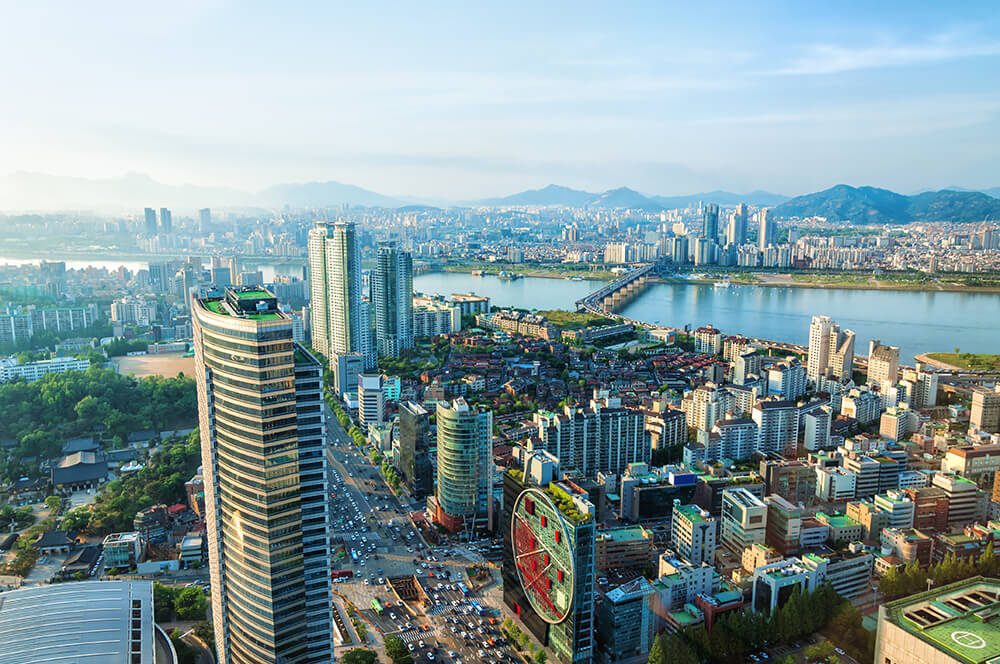 Seoul is the only city in the country that has a special subordination status. The main cultural, economic and political center of the Republic of Korea is administratively divided into 25 self-governing regions.

Blending a rich history with skyscrapers, state-of-the-art design and the latest technology, this vibrant and exciting city is located in the Hangang River Valley in northwestern South Korea, close to the Yellow Sea.

As one of the world's most influential financial and industrial centers, Seoul has become home to a large number of headquarters for the largest multinational corporations, international banks and international companies.

In 2015, according to The Economist Intelligence Unit, the capital of the Republic of Korea entered the TOP 10 most expensive cities in the world. The preserved national cultural traditions and mega-modernity of Seoul annually attract crowds of tourists who will forever be conquered by the unusually clean air for a huge city, the hospitality of local residents and a feeling of complete safety.

The capital of South Korea is filled with the widest range of tourist attractions, from exploring natural resources to visiting numerous museums and architectural monuments. Seoul is a city of palaces with five beautifully preserved huge palace complexes.

And, of course, the Seoul cuisine attracts special attention. Eating Korean delicacies and a variety of street food add a touch of flavor to your Seoul journey.

Climate in Seoul and weather for today

Seoul is dominated by a monsoon climate, formed by the proximity to the Pacific Ocean, which determines:

The period from July to September is the season of typhoons, some of which bring heavy rainfall to Seoul.

The most interesting sights of Seoul 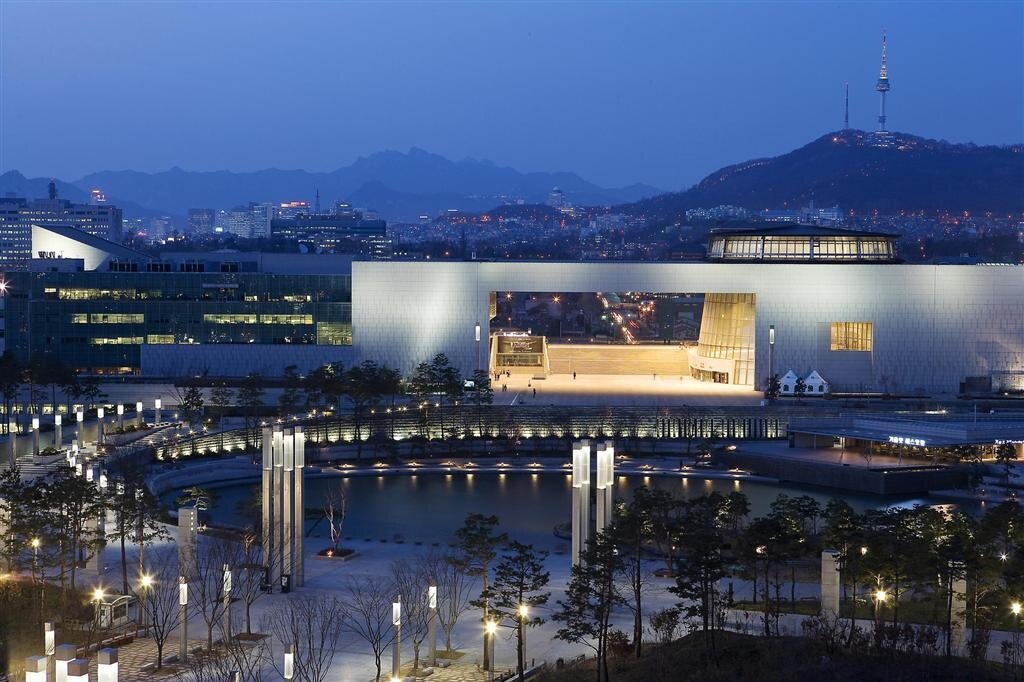 The National Museum of Korea is a must-see attraction in Seoul for every visitor to the Korean capital. The country's largest museum showcases incredible history and is a treasure trove of unique art from Korea and the Korean people.

One of the largest museums in Asia, founded in 1945. Located in Seoul's Yongsan area (near Itaewon). The area of ​​the building specially erected in 2005 in the style of an ancient Korean fortress is more than 137 thousand square meters (height is more than 43 m).

Numerous expositions of the museum are devoted to archeology, history and art, including an extensive collection of works and objects dating back more than a million years (ancient and prehistoric artifacts, sculptures, paintings and other works of art, as well as a large collection of objects and antiques):

Every year the museum, which is invariably included in the TOP-10 most visited art museums in the world, is visited by more than 3.5 million people. 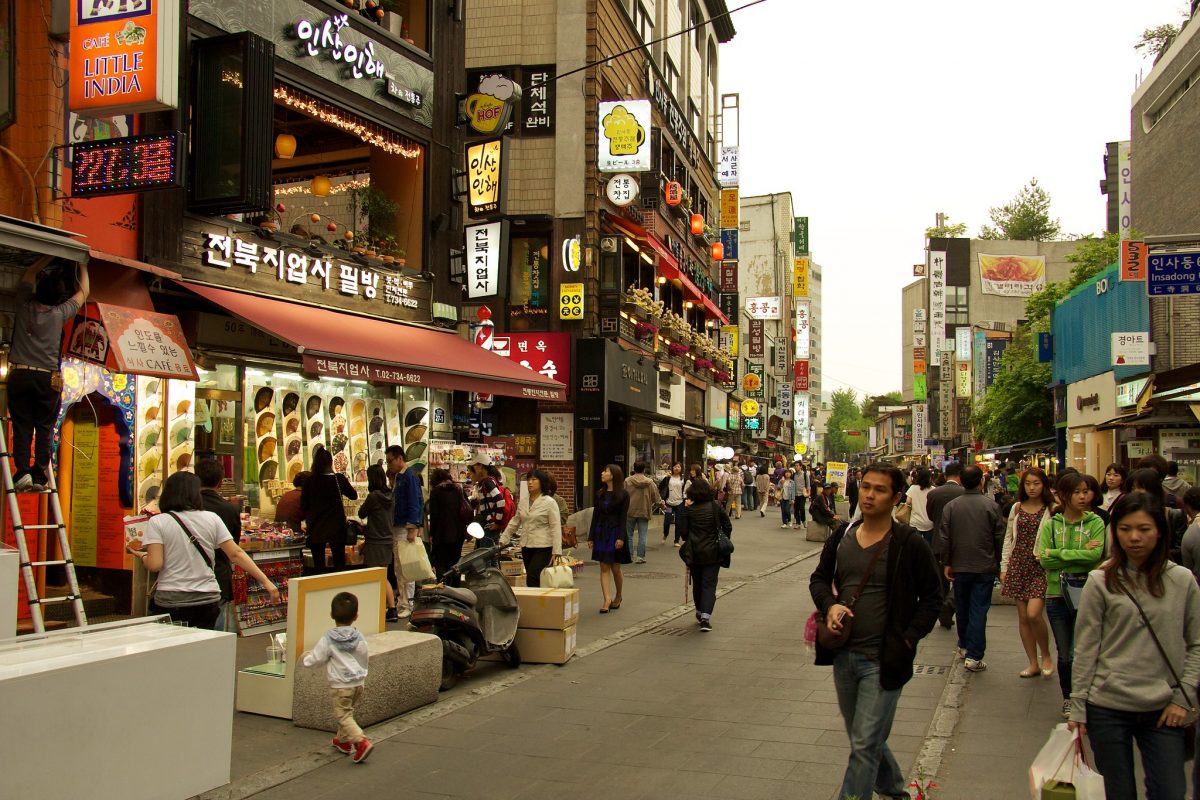 Insadong is a unique area in the heart of Seoul, the main street of which is Insadong-keel and the adjacent lanes and streets filled with art galleries, antique and tea shops, and shops.

Insadong-keel is a wide pedestrian street that once housed the homes of the upper class. Today, this crowded place is especially lively on Sundays when the large craft and culture fair opens. Numerous shops and stalls sell a wide variety of products made by Korean craftsmen. Here you can find: hanji (traditional handmade paper), teas, ceramics, hanbok (traditional clothing) and unique works of art. All guests of Seoul strive to get to Insadong, as only here you can find the most unusual souvenirs in memory of Korea.

Tea shops and small cafes are always full of visitors, and street performers and musicians do not stop performing on the street.

The combination of traditional old streets with houses that preserve the spirit of the culture of the Korean people, an abundance of art galleries, the opportunity to get acquainted with unforgettable Korean cuisine, as well as purchase exclusive things - make Insadong one of the most popular attractions in Seoul. 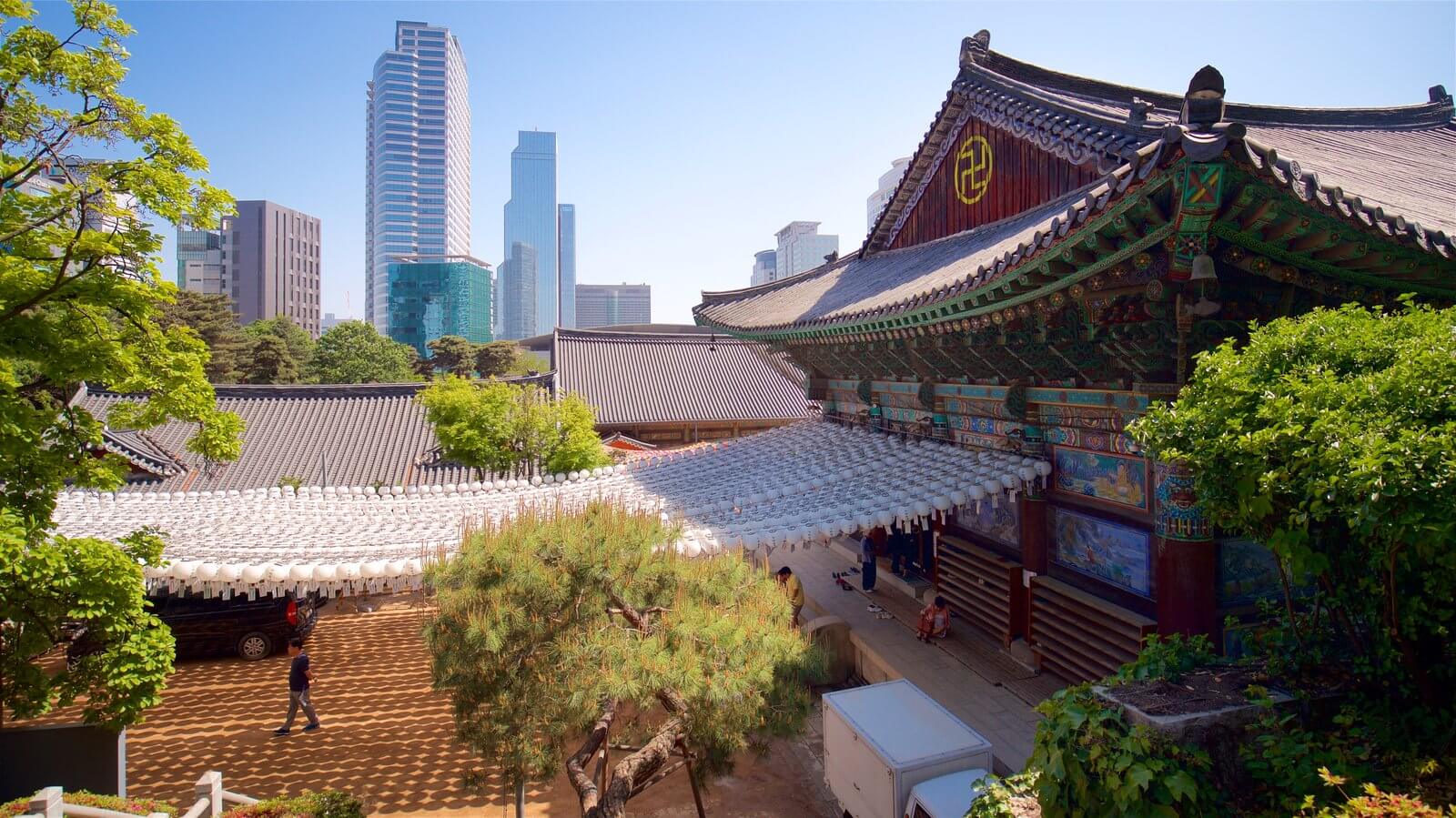 Bongeunsa is a working Buddhist temple with 1000 years of history in Seoul. The temple was opened in 794 on the side of a low mountain in the center of Gangnam district and today is a large temple complex. The oldest surviving building of the complex is the library building, famous for 3479 Buddhist scriptures and magnificent examples of woodcarving. The key attraction of the temple is one of the tallest in the country, a 28-meter high Buddha statue.

Bongeunsa is a special temple. It is a getaway for the business people of Seoul, providing an opportunity to retreat and escape from business in a relaxed atmosphere, feeling the contrast to the hustle and bustle of a large dynamic city.

Within the walls of the temple, you can immerse yourself in the traditions and culture of Korean Buddhism by visiting:

The Bongeunsa temple complex is considered to be one of the most beautiful places in Seoul. 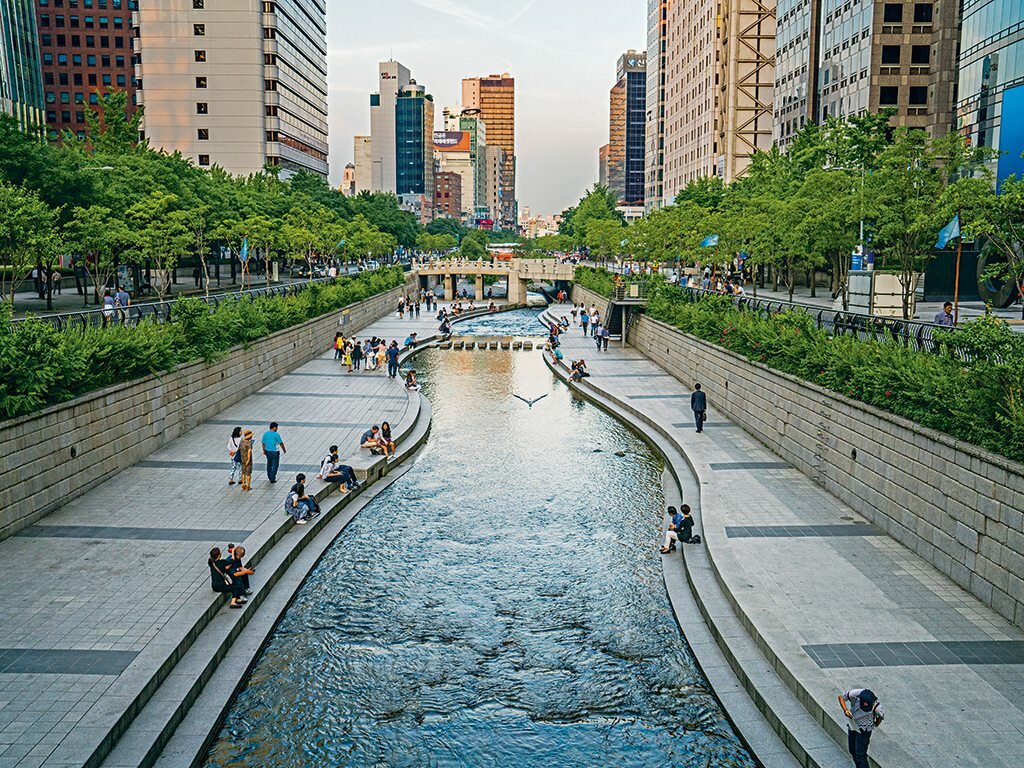 The natural Cheonggyecheon Stream (“Transparent Stream”) in the center of Seoul is a favorite vacation spot for residents and guests of the capital of Korea.

In the past, hidden by the concrete of a high-speed highway, today the landscape park stretches from west to east of Seoul for 11 km, to the small Cheonggyecheon River. The emergence of a green oasis in the heart of the metropolis has breathed life into Seoul's bustling business district.

The stream begins at the central Cheong Square with a pool with a fountain and a spectacular waterfall.

The scenic Cheonggyecheon Stream has convenient walking and cycling paths. The embankments are decorated with many flowers in flowerpots. The stream is shallow; from bank to bank you can easily cross over 22 bridges scattered along the entire length of the park. 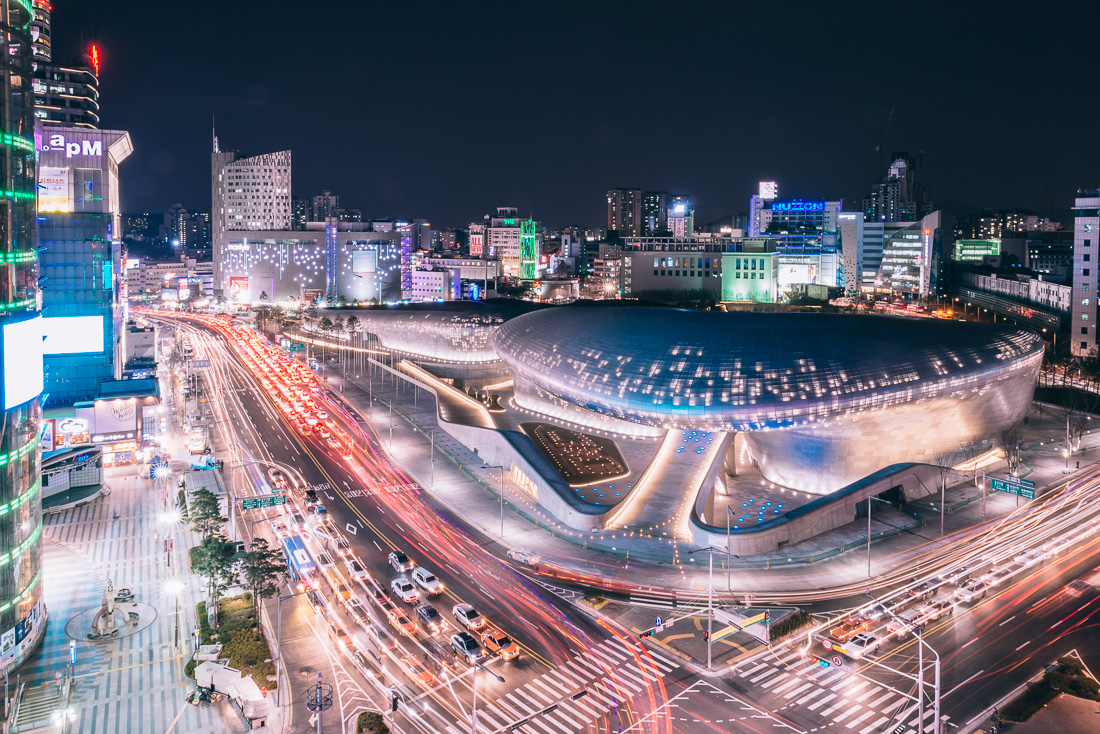 Dongdaemun Design Plaza has the recognizable abbreviation ‘DDP’, and the neo-futuristic appearance of the huge building is world famous. DDP is located in Dongdaemun District, Seoul.

One of the most popular architects was designed by the brilliant British-Iraqi architect Zaha Hadid and SAMOO (a multifunctional firm of professional specialists and engineers). Seoul was recognized as the World Design Capital in 2010 due to the unique project and its successful implementation.

The building was designed taking into account the principles of the metonymic landscape of Zaha Hadid:

The main building with smooth "alien" lines is 280 meters long (4 aboveground levels and 3 underground). The futuristic shape is accentuated by the silver aluminum slabs that are used to cover the structure. The interior is designed in a calm warm color and is unique for each room. The multifunctional center houses a huge variety of spaces:

A masterpiece of modern architecture attracts attention with unusual ideas and many original details.

How to get to Seoul: train stations and airports 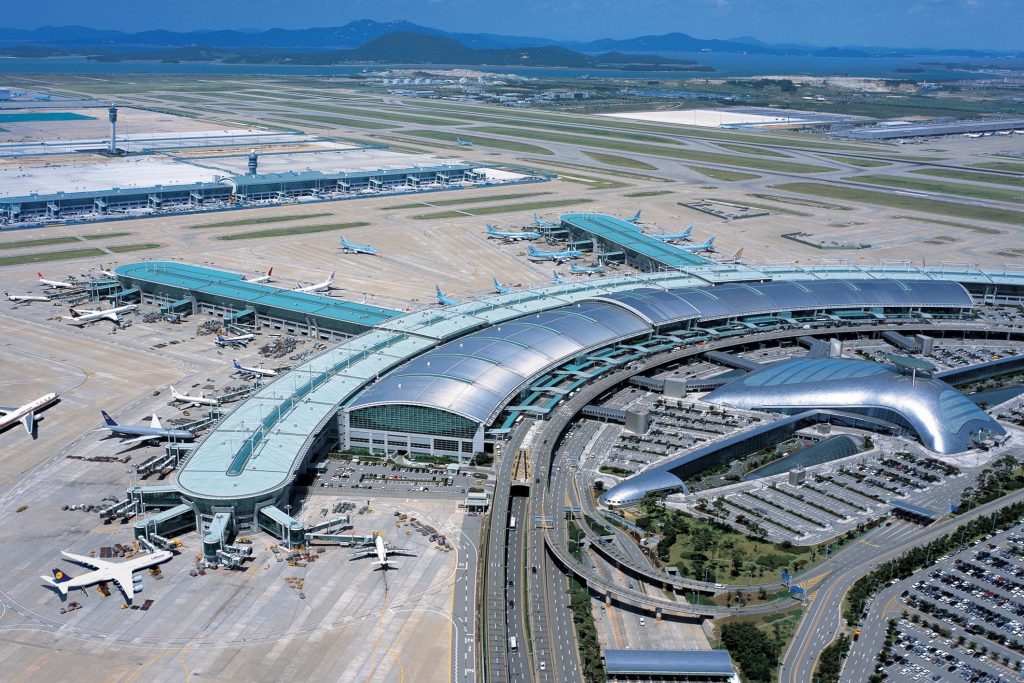 The main international airport not only of Seoul, but of South Korea as a whole. Located on the west coast of Yeongjongdo-Yung Yudo, west of Incheon. In 2020, the Skytrax World Airport Awards ranked Incheon Airport as one of the world's top 10 airports and ranked fourth in the honorary ranking, and was named the best civilian airport in the world by Airports Council International.

The annual passenger traffic is over 71 million people. Equipped with 2 terminals, 3 cargo terminals and 4 runways. Serves 70 airlines (the largest operator is Korean Air).

The second most important airport in the country is located 15 km from the center in the western part of Seoul. Passenger traffic is over 24.6 million passengers per year. Located in Seoul. Equipped with 2 runways.

Seoul Station is the main railway station and a major transport hub in the country. Opened in 1900. Connects the capital with the major cities of the republic. Served by KTH and other high-speed trains. 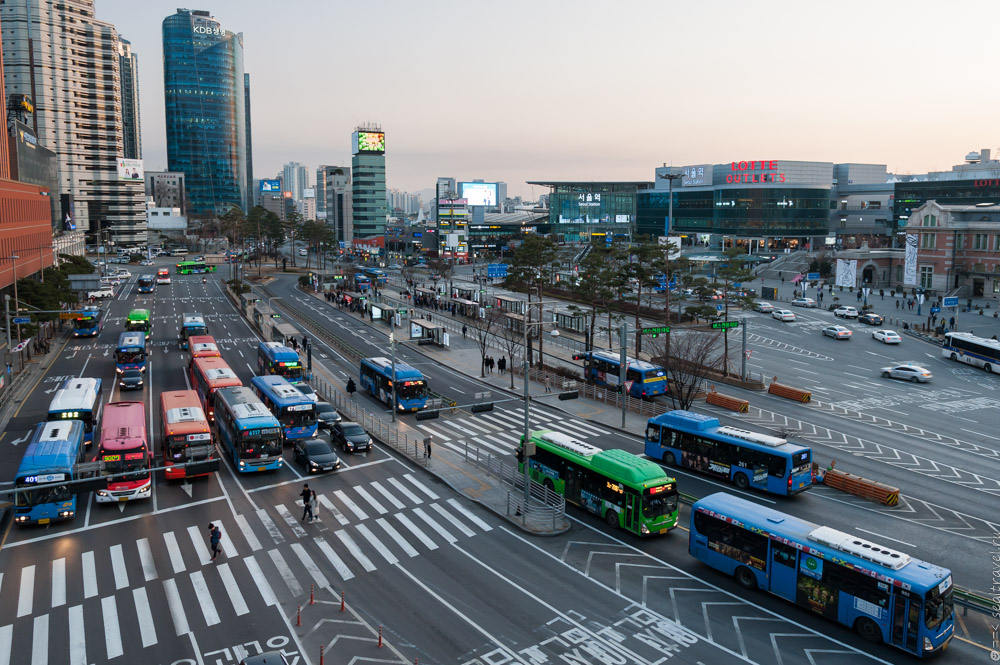 Bus transport is very well developed in Seoul and is one of the most popular and demanded modes of transport. 200 bus routes allow you to get anywhere in the capital. To prevent delays on the route due to traffic jams, special lanes are equipped for buses.

Buses in Seoul come in 4 colors:

The Seoul Subway is one of the busiest subways in Asia and ranks 4th in the world in terms of congestion, and is also one of the most convenient in the world: the signage system is very detailed and understandable. The metro network is operated by the Seoul Metro Corporation.

The Seoul Subway has been open since 1974 and today includes: 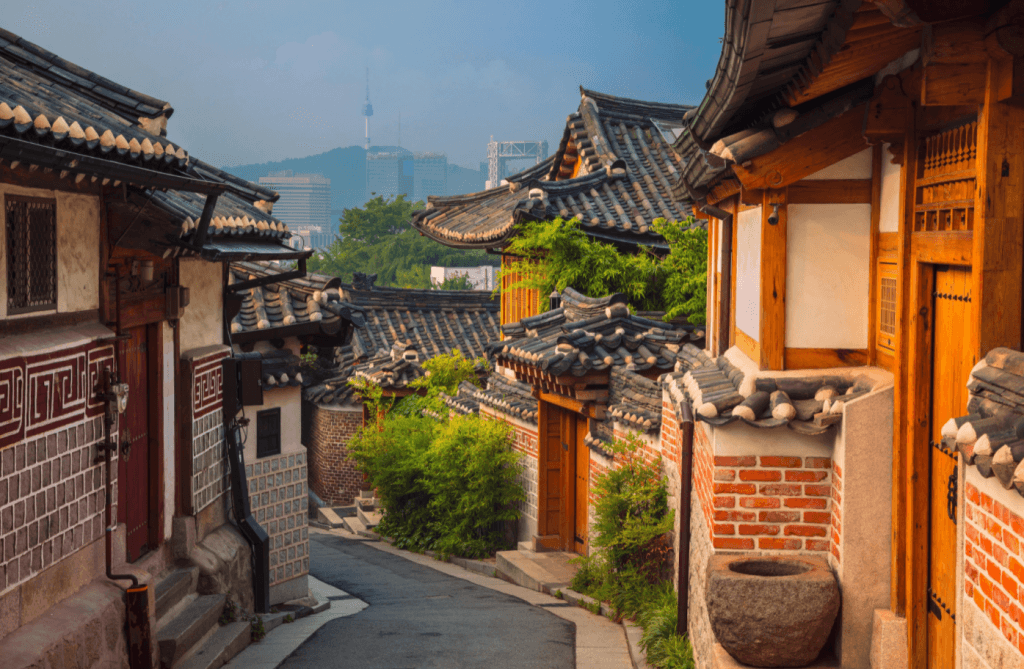 In the heart of Seoul, on the top of a hill between Gyeongbokgung Palace and Changdeokgung Palace, is the Korean village of Bukchon Hanok (“Northern Village”), which has preserved the traditions of Korean culture and architecture for over 600 years.

And today the area of ​​the folklore village remains residential and prestigious: ordinary families live here, as before. Previously, it was inhabited by Korean noblemen (“yangbans”): wealthy educated people, descendants of members of the royal family, as well as wealthy peasants and artisans.

Authentic Korean houses ("hanoki") are now museums, guest houses, craft workshops, cultural centers, and traditional cuisines. Principles of traditional hanoki: one door leads to one room; it was forbidden to enter the house with shoes on.

The unique historical area of ​​the huge metropolis is very popular with tourists. About a million visitors visit the narrow streets and enjoy the atmosphere of ancient Korea every year. The influx of tourists occurs during the warm season. And the Seoul people themselves are happy to come to Bukchon Hanok all year round to take a break from the bustling metropolis and immerse themselves in the unhurried rhythm of village life.