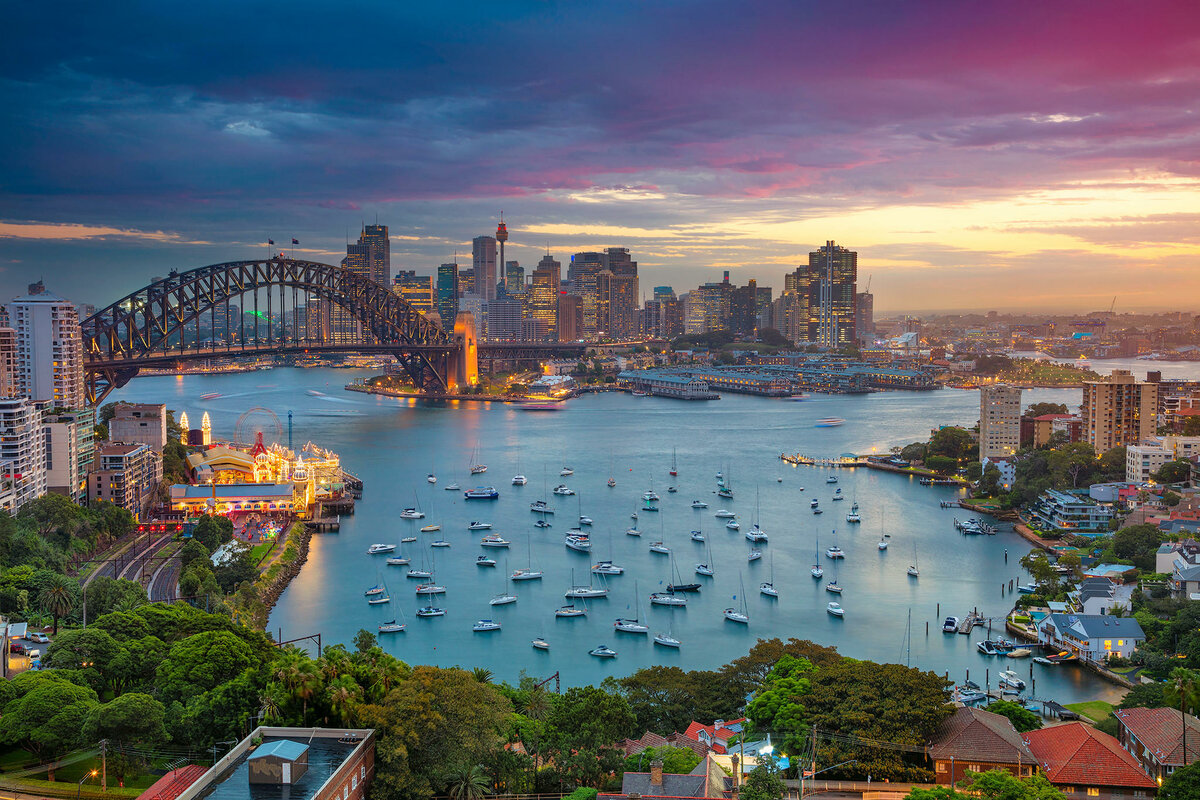 The city of Sydney is the oldest city in Australia. It is one of the most cosmopolitan cities in the world. It is the largest city in mainland Australia (Sydney area is 12,144.6 km²). More than 5.1 million people live on its territory, of which only 1.1% are Aboriginal.

Founded in 1788 in the southeast of the mainland, on the shores of the small Sydney Bay, the metropolis became the first colonial European settlement. And since a very large number of criminals from Great Britain were sent into exile in Sydney. At the beginning of the 19th century, more than 40% of the population were prisoners. Currently, more than ⅓ of Sydney's population was born outside Australia, making the city the seventh largest city in the world in terms of the percentage of residents born abroad.

Sydney is famous for its beaches and beautiful views of the coastline, which is very indented and teeming with coves and bays.

More than 10 million local and foreign tourists visit one of Australia's main cities every year.

The city is divided into districts of local self-government (38 districts).

In terms of cost of living, Sydney ranks first in Australia and is one of the 10 most influential and economically developed cities in the world. Residents of the city have the highest per capita income in Australia, and Sydney's economy makes up 1/4 of the state's economy. It is based on services, trade, and healthcare.

Climate in Sydney and weather for today

Sydney's subtropical oceanic climate is characterized by moderately hot summers and moderately warm winters. In coastal regions, the climate with a small temperature amplitude is very different from the climate of regions located in the interior of the continent. Average January temperatures are 16 - 26 ° C. This is the warmest month of the Australian summer. In winter, the temperature does not drop below +5 ° C (July is the coldest month of the year with a temperature of 8-16 ° C).

Average annual rainfall is just over 1200 mm, with 138 rainy days a year. The last snowfall was recorded in 1836. Fluctuations in the temperature of the surface water layer in the Pacific Ocean play a huge role in the formation of the climate in Sydney. This phenomenon leads either to drought, leading to forest fires, or to storms and heavy hail, causing huge damage to urban economies.

Problems in Sydney are caused by constant floods in winter and spring.

The most interesting sights of Sydney

The Sydney Tower (height 309 m) is the tallest building in the city, located in the Business Center of Sydney. In the Southern Hemisphere, it ranks second in height, behind only the Sky Tower (Auckland, New Zealand). The construction of the structure under the guidance of the talented architect Donald Crohn lasted 6 years (from 1975 to 1981).

The top floor is 260 meters high, and the main 360 ° indoor observation deck is unmatched in height (250 meters) and allows tourists to see the most famous landmarks of Sydney. Slightly higher, at an altitude of 268 meters, there is an open Skywalk platform with a glass floor, which offers a magnificent view of the city.

In addition to viewing platforms, visitors can enjoy a 4D cinema, a souvenir shop, 3 restaurants, 3 elevators.

A spire-lightning rod with a height of 4 meters crowns the tower for telecommunication and navigation purposes. The 8-story building has 420 windows and 1504 isolated stairs. On the steps, the unique Sydney Tower Stair Challenge is held annually (the funds raised are sent to fight cancer).

Sydney Tower (Centrepoint Tower) is a member of The World Federation of Great Towers, which includes 32 sites. 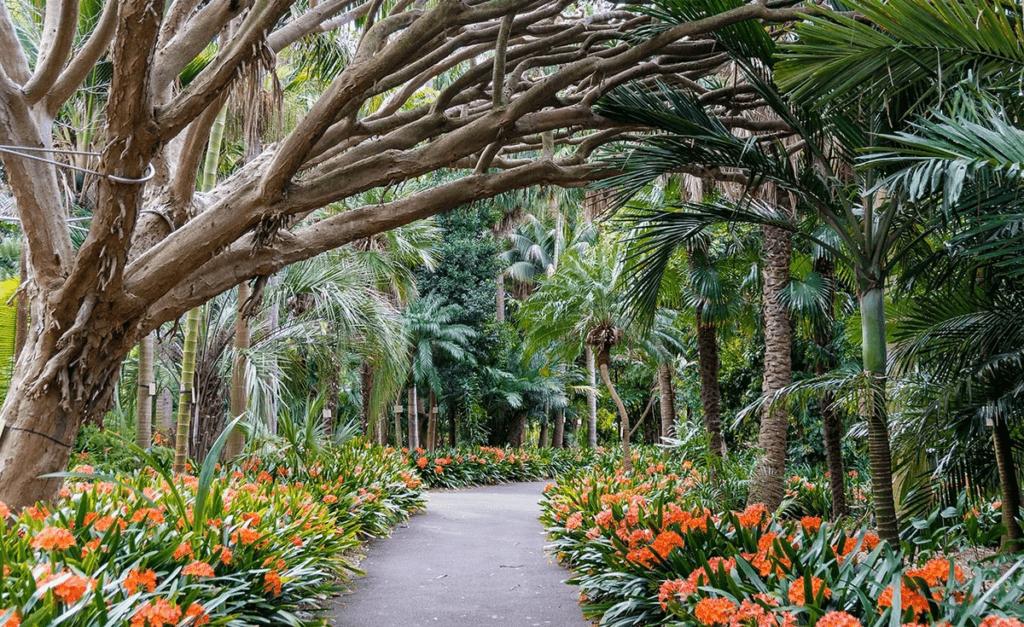 The Royal Botanic Gardens of Sydney is located in the heart of the city on the shores of Sydney's Bay and covers an area of ​​30 hectares. This magnificent green oasis is based on the first farm in Australia, built by the Governor of New South Wales Philip in the late 18th century. The unprofitableness of the farm project led to the decision to create a botanical garden on this land.

Today, about 9 thousand plants grow on the territory of the park, of which 4,770 are trees, including the three oldest trees in Australia. The collection of the park contains the richest National Herbarium, which has collected 1.2 million plant exhibits.

In 1879, a large Exhibition Palace was built in the park area, the building of which is made in the Victorian style.

The annual Vivid Sydney festival uses part of the garden area: the numerous garlands on the trees create a unique atmosphere of magic.

Attendance: over 3 million people a year. The flow of visitors to the park is continuous, as the park is located within walking distance of the Sydney business center and is a favorite recreation area for guests and residents of the city. One of the most beautiful harbors in the world. Darling Harbor is a large entertainment district with pedestrianized streets in the western part of the central business district of the city. It contains a cozy promenade and beautiful ships, a variety of museums and playgrounds, bridges and green gardens, restaurants and cafes. 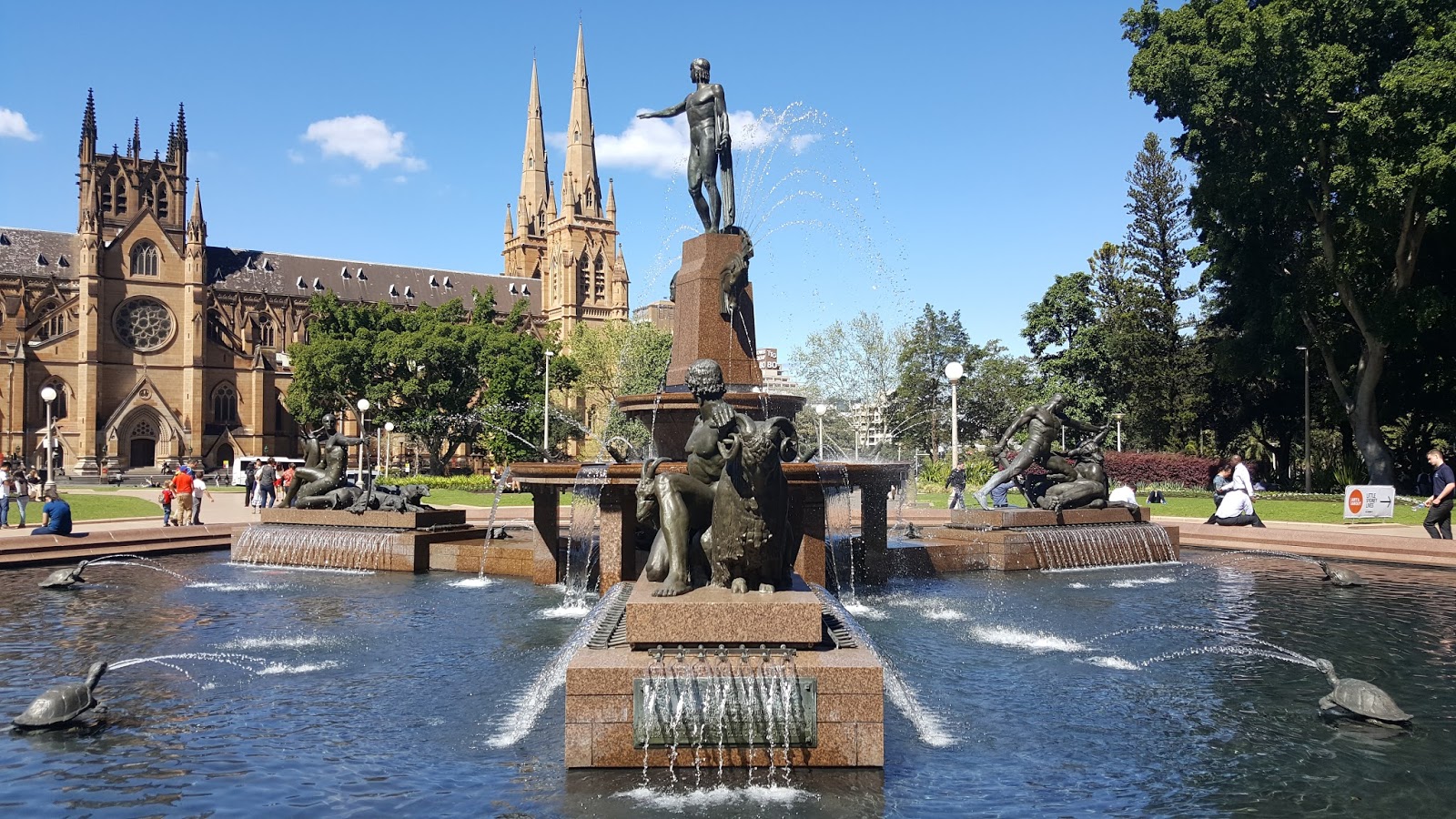 Sydney's oldest public park is located in the southern part of the city. It is a UNESCO World Heritage Site and covers an area of ​​16.2 hectares. The landscape of the picturesque park contrasts strongly with urban buildings: cool greenery of 580 trees (most of them are fig trees); magnificent alleys connecting the streets of the metropolis; lawns, flights of stairs, sculptures.

The nature of the garden and park complex is emphasized by the monuments located at each end of the park: in the north, the monument with the Archibald fountain is a key point of interest, in the south: the Anzac memorial. The park is one of the most favorite recreation places for local residents.

The history of Hyde Park began in 1810 and today it is one of the most revered sites in Sydney. Port Jackson is a picturesque bay in southeastern Australia with an area of ​​55 km² and a perimeter of the mouth of 317 m, which includes:

Port Jackson is the world's largest natural bay, the sunken river valley (Ria). It was discovered by James Cook in 1770. The location and geological origin of the three-armed bay makes it ideal for the construction of ports and a key location in the development of the metropolis.

Life on the coast of the Gulf continues to boil: the Sydney Opera House, the Harbor Bridge, the Australian National Maritime Museum in Darling Harbor are located here. The harbor is a traditional venue for festive, recreational and sporting events (such as the annual yacht race).

Several islands are located in the waters of Port Jackson, which are part of Sydney Harbor National Park and contribute to the beauty and uniqueness of the harbor panorama:

Port Jackson is a powerful economic support not only for Sydney, but for the entire country. 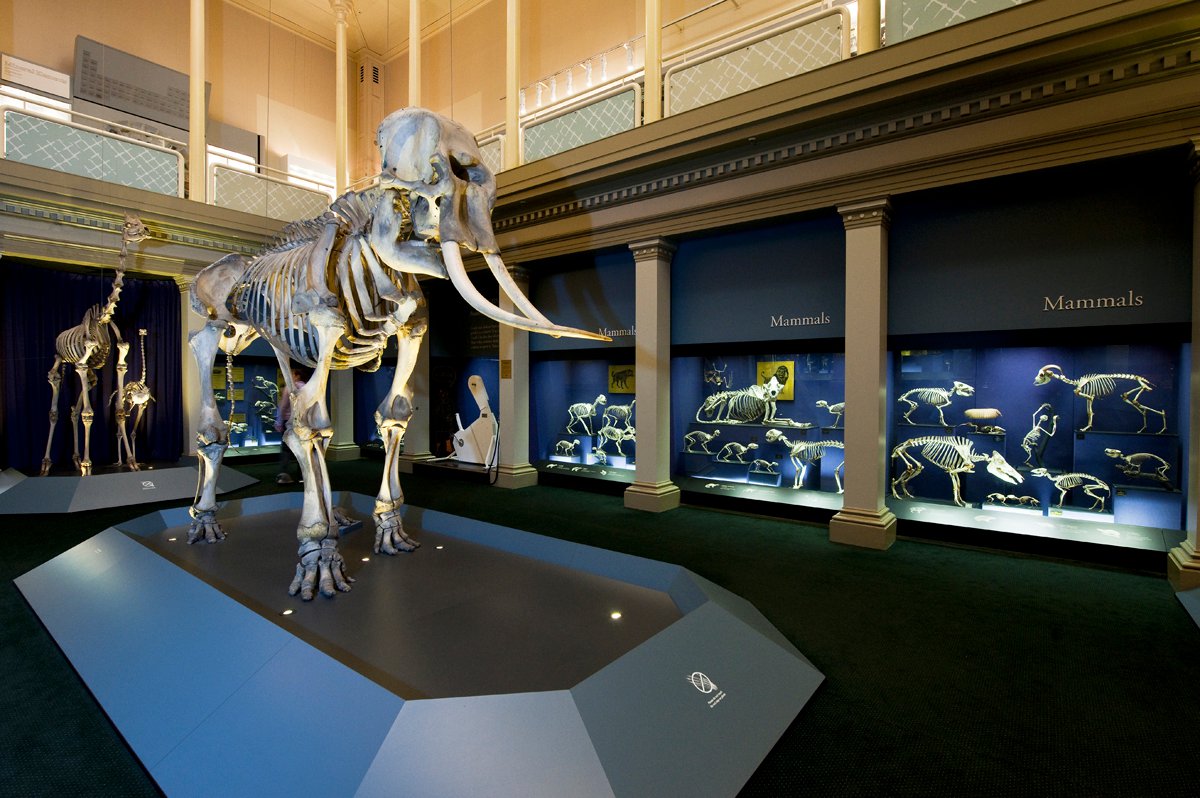 The Australian Museum in New South Wales is the oldest in Australia and the first public museum to open its doors to visitors in 1836.

The oldest museum on the continent has collected more than 18 million cultural and scientific objects:

The museum pays special attention to the history of Sydney: on each of the floors there are panoramic views of the city from different historical periods and eras.

Currently, most of the exhibits are located in a new modern building. The old residence of the governors of New South Wales, in which the museum was located for many years, remains a separate architectural monument. The symbol of the first meeting of Europeans with local aborigines: a wooden sculpture Edge of the Trees engraved with the names of the first settlers on the mainland, greets visitors at the entrance to the museum.

In addition to holding interactive exhibitions and participating in public programs, the museum is a serious research platform with a worldwide reputation for special educational programs.

Cathedral of the Virgin Mary 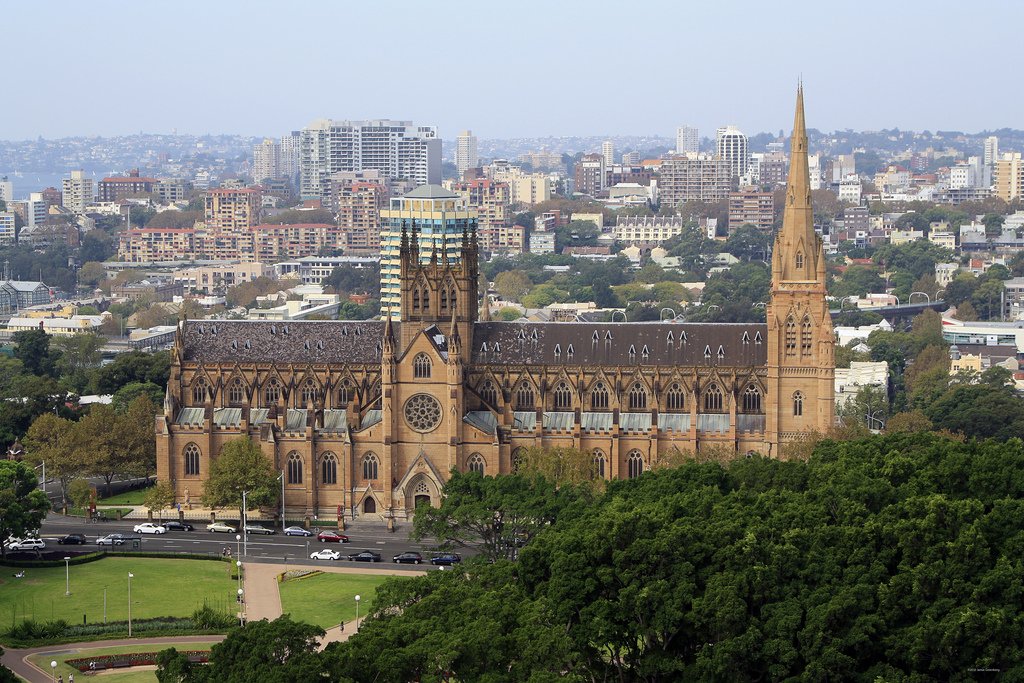 The Cathedral of the Virgin Mary is rightfully called a national shrine. It is located in the heart of business Sydney and its architecture instantly plunges into the atmosphere of the Middle Ages. Since 1930, this largest cathedral in Australia has been included in the list of Australian churches with the status of a minor basilica. The status of minor basilica is assigned by the Pope and gives a number of privileges.

A huge building made of golden sandstone in the neo-Gothic style amazes with its grandeur and beauty:

Given the size and location of the site on which the cathedral was erected, the architect Wardell had to go for an unconventional solution in construction and orient the altar of the cathedral to the north.

The Cathedral of the Virgin Mary is considered one of the most beautiful religious buildings in Australia.

How to get to Sydney: train stations and airports

Sydney Kingsford Smith Airport is the oldest and largest airport in Australia. Located in the Mascot area, 10 kilometers from Sydney's CBD and close to Botanic Bay.

It is the busiest airport in the country. The passenger turnover is over 40 million people a year. Serves 43 international and 46 local destinations.

The airport's control tower, which is about 43 meters high, was included in the Commonwealth of Australia Heritage List in 2016.

Passenger turnover: about 240 thousand passengers per day and about 85 million per year.

Since 1999, Sydney Central Station has been listed on the New South Wales State Heritage Register. 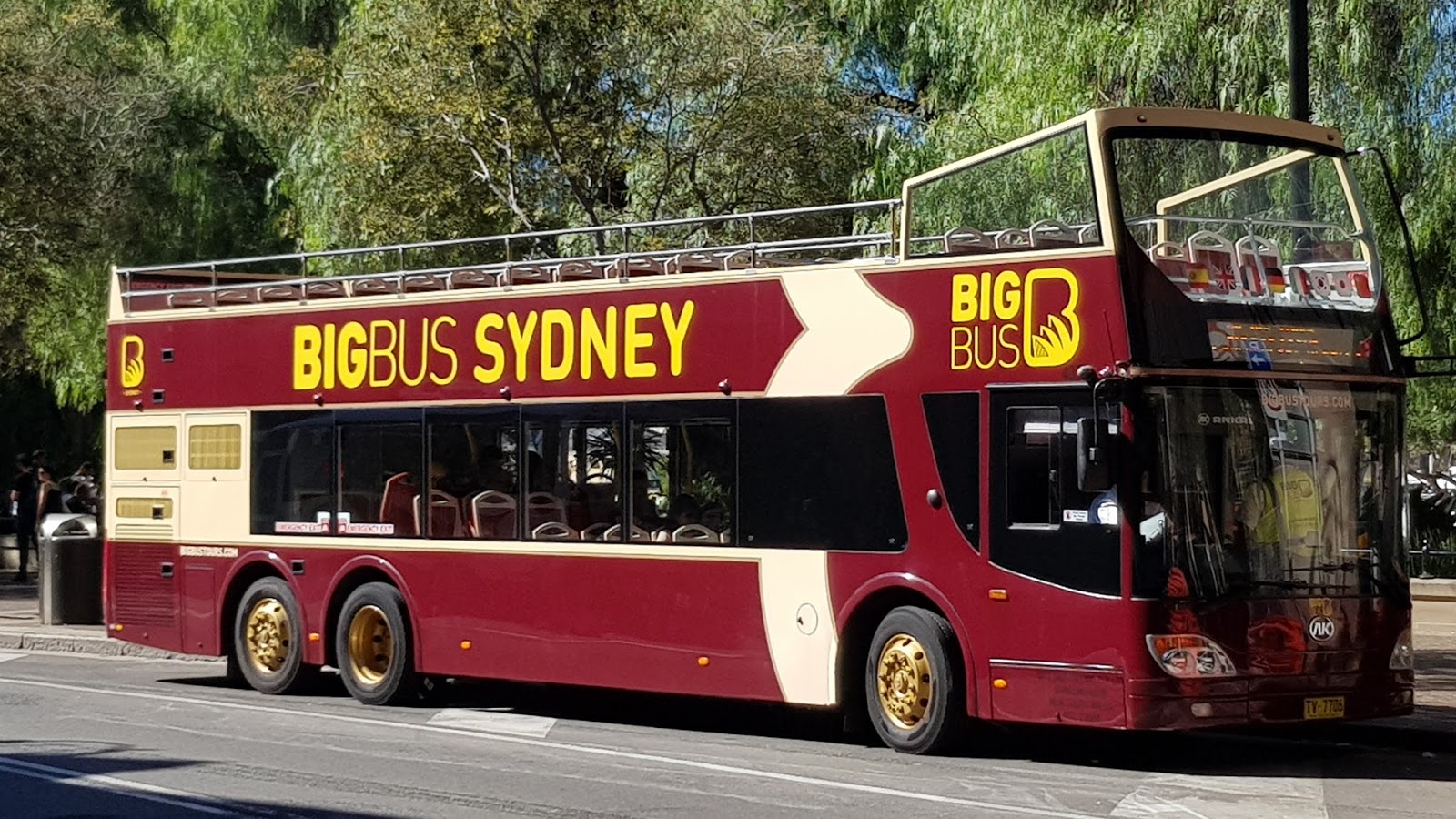 Sydney public transport is represented by: