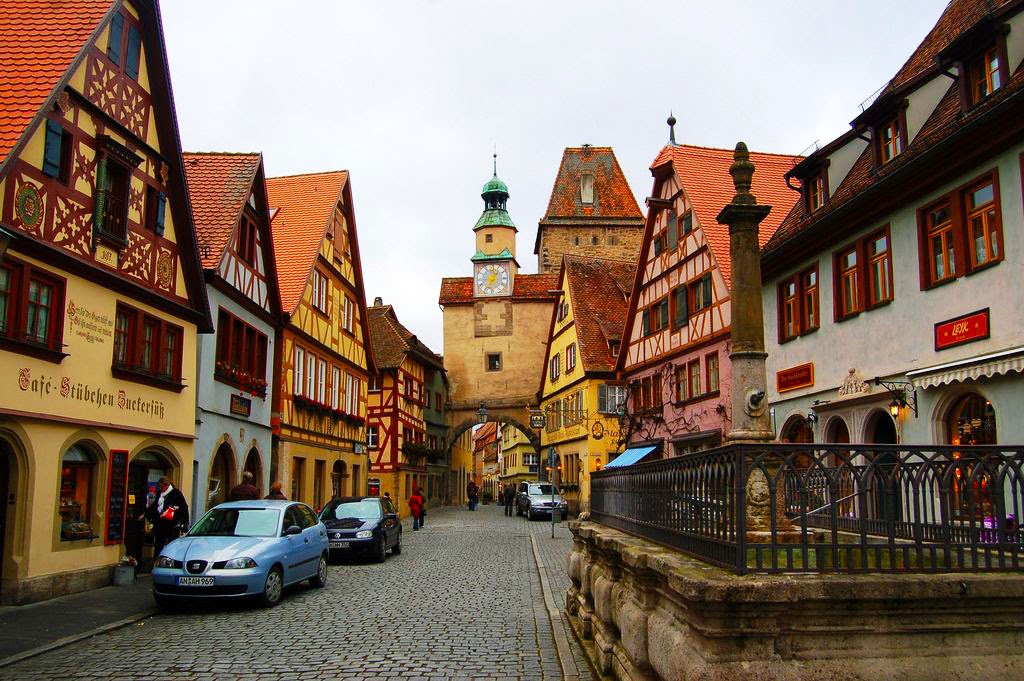 The Federal Republic of Germany (Bundesrepublik Deutschland) is a model European secular federal State with an advanced and leading economy. The country is located in the center of Western Europe and has all the advantages of this placing. It is surrounded on all sides by the countries of the European Union: France, Austria, Switzerland, Luxembourg, Denmark, Belgium, the Netherlands, the Czech Republic and Poland.

This country sets the pace of life and rules for the entire European Union, having a leading position in it. At the same time, Germany is a country with great tourist opportunities and can offer its guests many attractions to see.

The country's territory occupies 357 th km2 with a population of about 83 M people. Accordingly, the population density is 232 people / sq. km. The volume of the country's GDP is a fourth rank in the world, as well as the human development index (HDI). The time zone is the same throughout the territory and is UTC +1 in winter and UTC +2 in summer. Right-hand traffic. Studded tires are prohibited for any cars.

Basic weather information in Germany: most of the country is in the temperate continental climate. The northern part of the country is generally warmer, but more windy and rainy, while the south is colder due to the mountainous landscape. The average daily temperature is 22-24 degrees in summer and 0 degrees in winter. 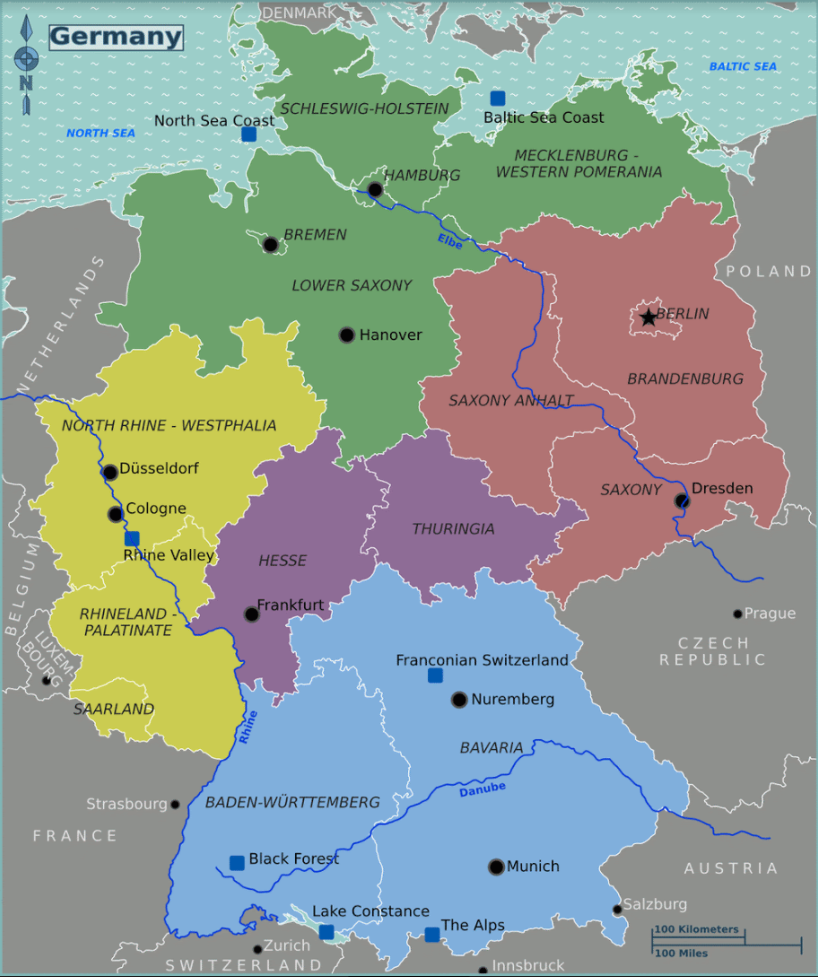 Germany is regionally divided into 16 equal autonomous lands, each of them:

German Lands and their capitals:

The region is located in southwestern Germany with its capital in Stuttgart, formed on April 25, 1952. Land with a developed economy and one of the lowest unemployment rates in the country, with an area of ​​36 thou km² and a population of about 11 m people.

It is located in the south and southeast of Germany with its capital in Munich (München). Bavaria has the largest area in Germany, 71 thou km², and a population of about 13 M.

The capital and largest city of Germany. It is part of Germany as one of 16 lands with an area of ​​891.7 km² and a population of about 3.6 m people. Located in the center of Brandenburg, but not part of it.

Land of the Federal Republic of Germany with the capital in the city of Potsdam (Potsdam), an area of ​​30 thou km², and a population of about 2.5 m people. Located in the east of the North German Plain.

The smallest region (City-state) within Germany. It consists of two West German cities, Bremerhaven and Bremen (separated by the territory of Lower Saxony), with the capital in Bremen, an area of ​​419 km² and a population of about 0.6 m people.

North German city-state, the second largest city within Germany with an area of ​​755 km² and a population of 1.8 M.

Land in the center of Germany with the capital in Wiesbaden, an area of ​​21 thou km² and a population of about 6 m people.Hessen is very economically developed region with largest city Frankfurt in its composition.

The German state with the lowest population density, the capital in Schwerin, with an area of ​​23 thou km² and a population of 1.6 M. It is located in northeastern Germany and has access to the Baltic Sea.

It is the second largest area in Germany after Bavaria. The capital is the city of Hannover, the area of ​​the region is 48 thou km², the population is about 8 M people. Has access to the North Sea.

It is located in the west of Germany, has an area of ​​34 thou km², most populous Land (18 M) and most urbanised with 29 big german cities (from 80). The capital is Düsseldorf.

The land is located in the west of Germany, with the capital in Mainz, a population of 4 M and an area of ​​20 thou km². This territory is very interesting historically and touristically.

The capital of the state is Saarbrücken. The population is about 1M people, the area is 2 568 km². It shares borders with Luxembourg and France. In the past the region was one of the centers of coal mining. But now is not economically developed.

Located in the east of Germany, with the capital in Dresden (Dresden), an area of ​​18,4 thou km² and a population of 4 M people. Traditionally strong in education.

One of the new lands in Germany. Formed in 1947, with its capital in Magdeburg, an area of ​​20,5 th km² and a population of 2.2 M people. The region is in relative economic depression.

Located in the north of the country, besides the German lands, it has common borders with Denmark. The capital is Kiel, the land area is 15,8 th km², inhabited by 2.8 M people. The main sectors of the economy are logistics (sea and road transport), agriculture, sea fishing.

The capital in the city of Erfurt. Located in the eastern part of the country. The area of ​​the region is 16 th km²? population is 2.1 M. This german region is famous for its forests, mountain peaks and medieval settlements and a great role in the history of the Protesten movement (Luther's activities in Erfurt Cathedral).

The most interesting sights of Germany 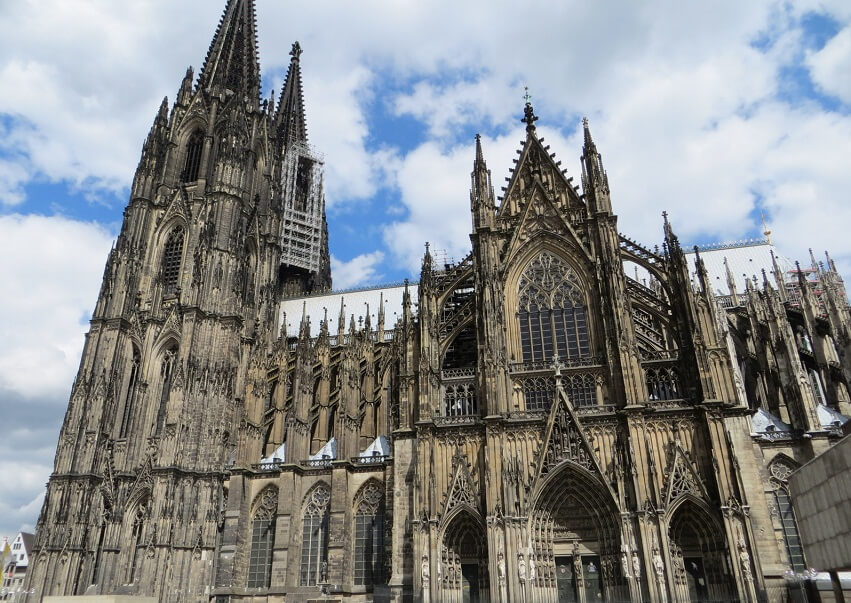 Catholic Gothic cathedral, founded in 1248. Listed as a World Cultural Heritage, it ranks third in the list of the tallest churches in the world. It is a very stately building with two identical spiers, a massive dark façade and stunning views on the Rhine. It is very popular with the tourists. 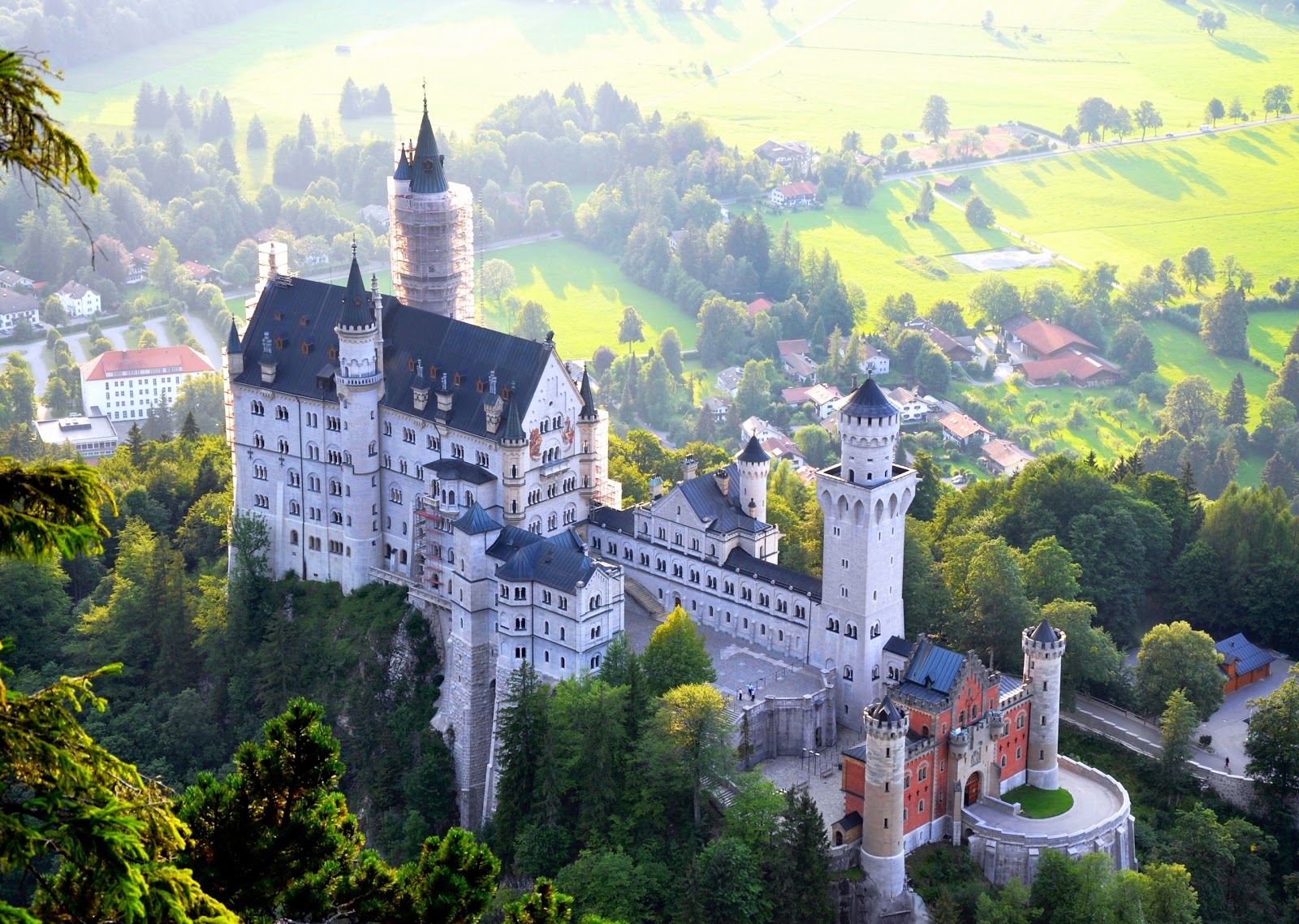 Translated from German as "New Swan Stone". The most beautiful castle in Bavaria. Built by King Ludwig II in 1869, it is now one of the most popular tourist destination in southern Germany. The attraction is visited by about 1.3 million visitors annually.

The Monument to the Battle of the Nations (Völkerschlachtdenkmal) 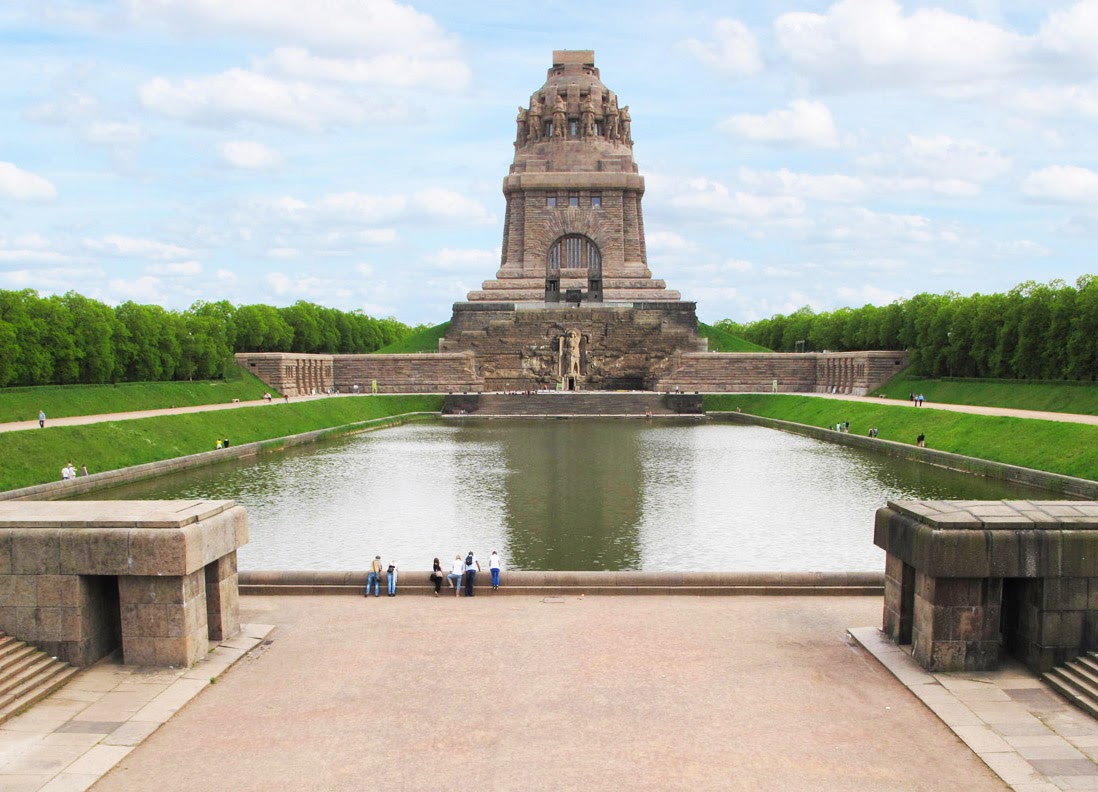 A branch of the Leipzig History Museum, one of its main attractions. The physically largest monument in Europe. Erected in memory of the victory in 1813 of a coalition of Austrian, Prussian, Russian and Swedish troops over the Army of Napoleon Bonaparte. Before the First World War, the Battle of Leipzig was considered as the most massive and blooody in European history. 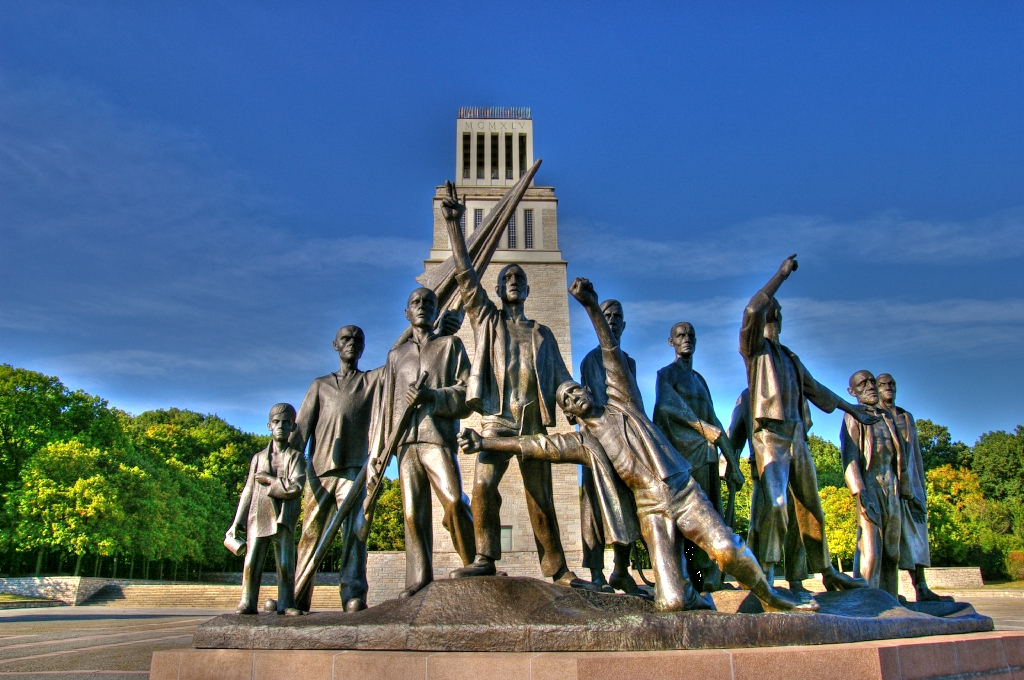 National Memorial Complex, opened instead of the place of a concentration camp, which functioned from 1937 to 1950 (of which in 1945-1950 in the Russian NKVD system). In total, about 250 th people from all European countries passed through the camp, of which at least 56 th died. In 1951, a memorial plaque was installed, and in 1958, a national memorial complex was opened. 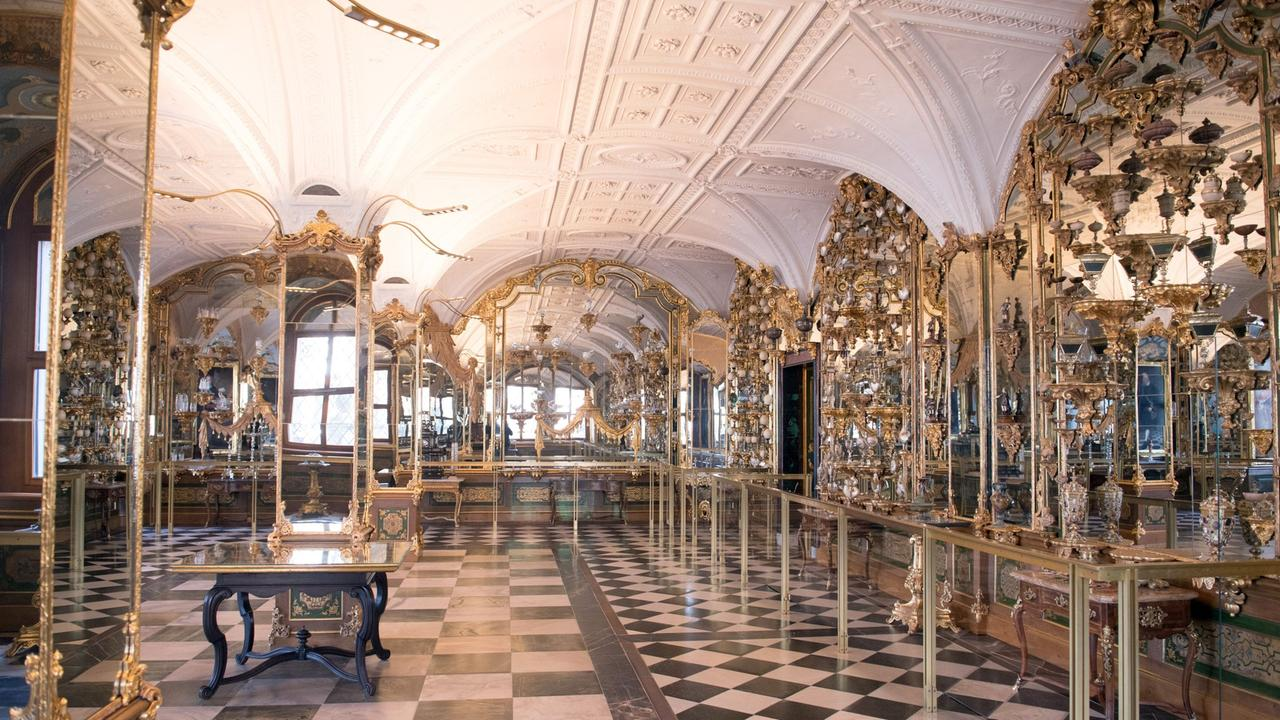 A collection of approximately 750 paintings by old masters, acquired by Saxon rulers in the 18th century. Top quality fine art. Raphael's Sextine Madonna, masterpieces by Rembrandt, Titian and many other masters. Medieval baroque building, presumably built in the 12th century. It is noteworthy that it was never captured and defeated. The castle has a collection of medieval weapons, a treasury, and many original medieval household items. 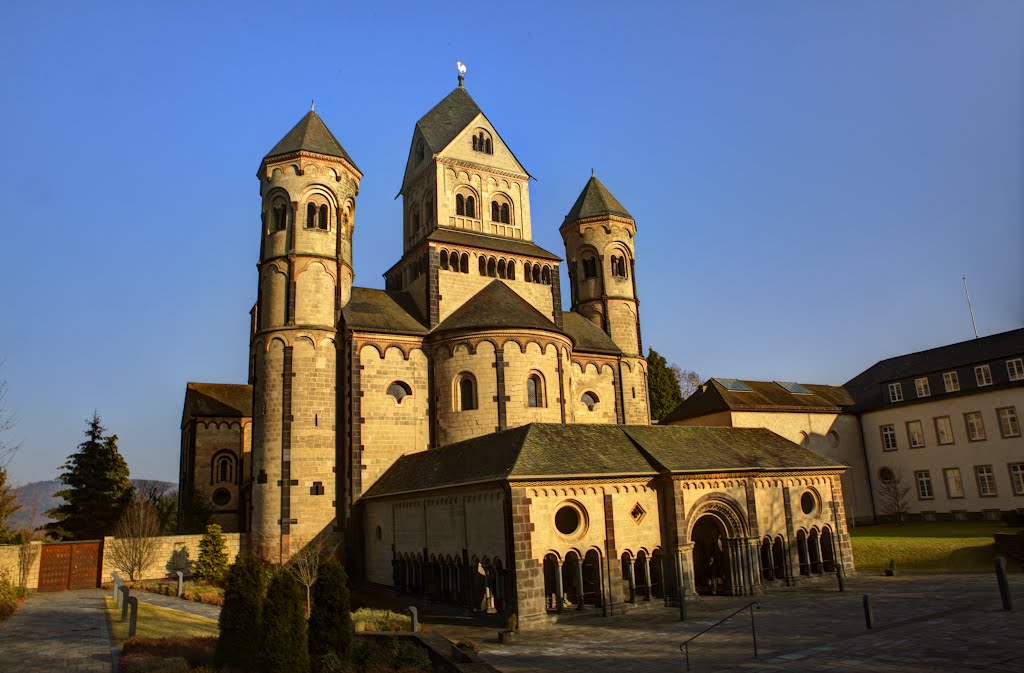 Medieval monastery, founded in 1093. One of the best conserved and most remarkable buildings in Germany, made in the Romanesque style. In addition to the monastery itself, you can visit Lake Laakh (fishing, camping, boat rental). As well you can live in lakeside hotel, to do some craft job in workshops with training opportunities. 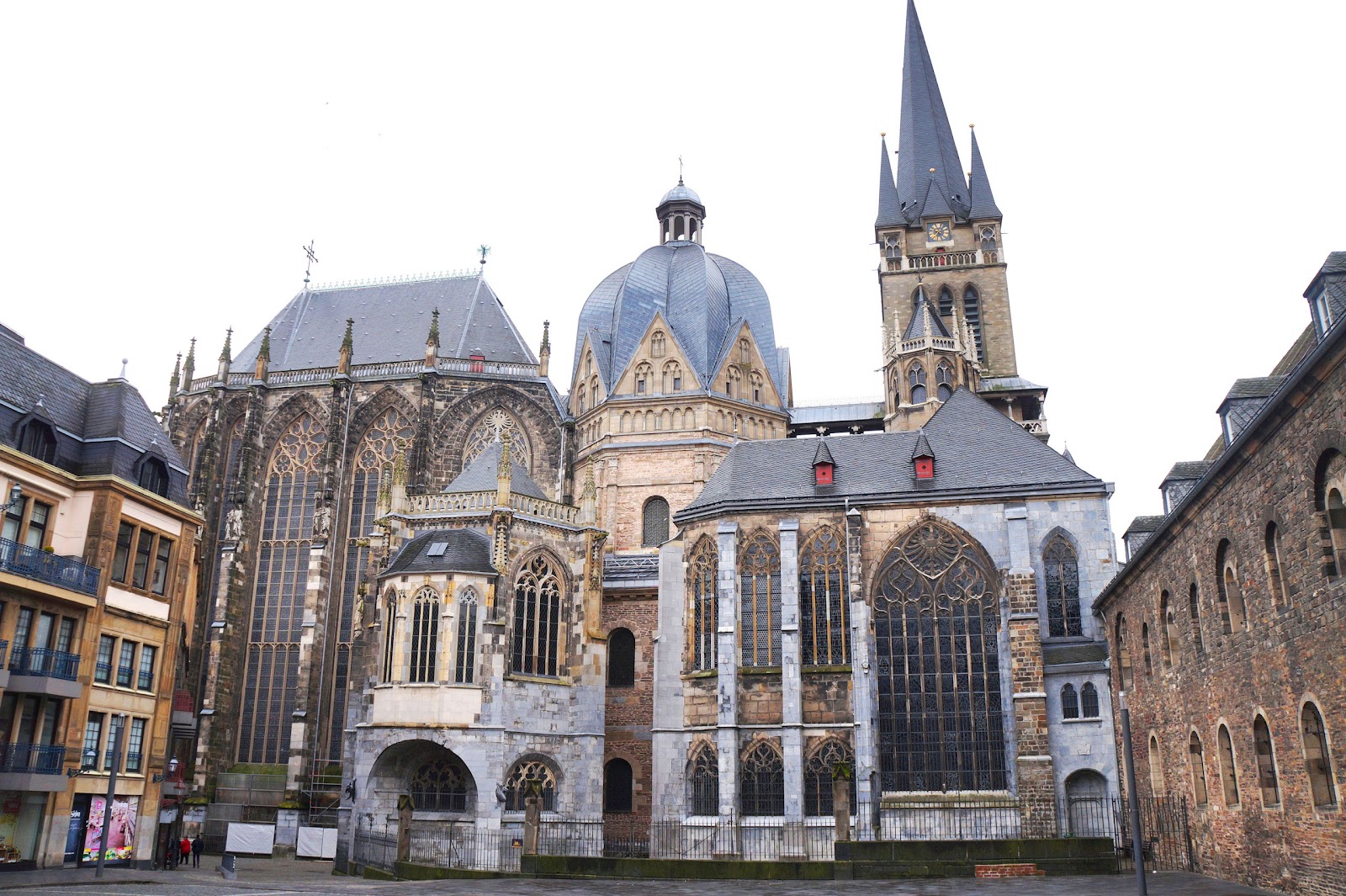 A unique temple (chapel), an architectural monument of the time of Charlemagne built in 805. It is the only preserved intact building of the Aachen Palace complex. In the chapel of the temple, the coronation ceremony of the emperors of the Holy Roman Empire took place for 600 years. Charlemagne himself was buried in this chapel in 814. 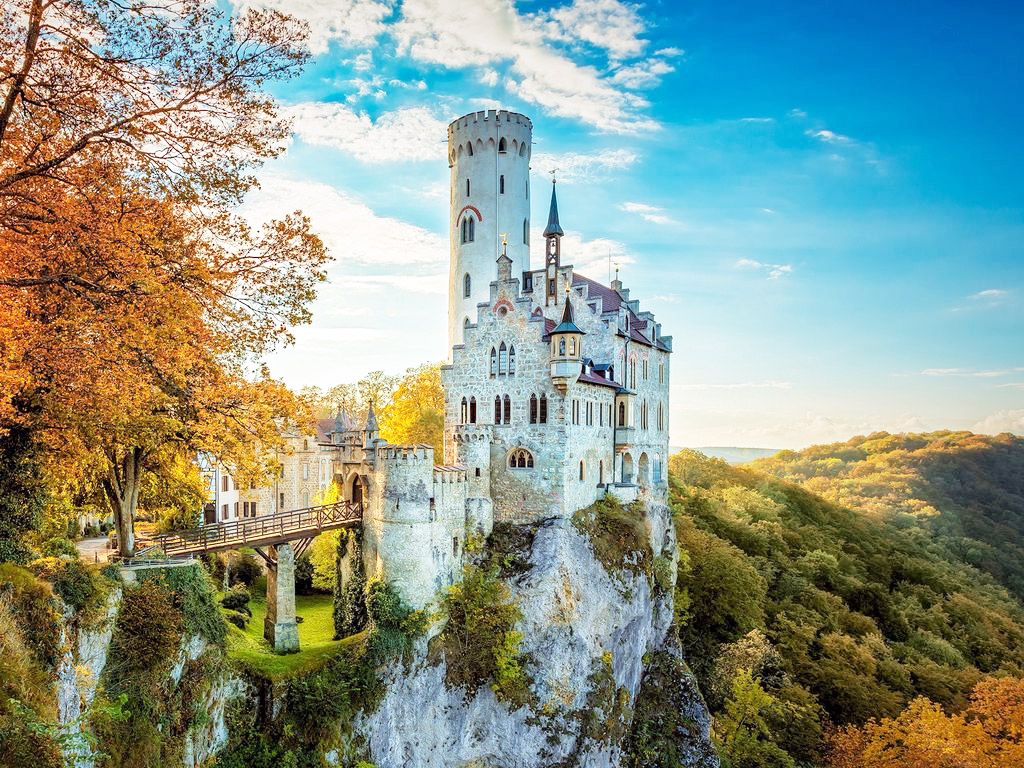 "Fairy-tale" castle in the neo-gothic style in Baden-Württemberg. It is interesting because it was built in 1840-1842 on the foundations of a previously destroyed castle of about 1200 year in accordance with ideas      about a medieval fortress, popular in the 19thcentury.  The building houses has a very large collection of historical weapons and armor. 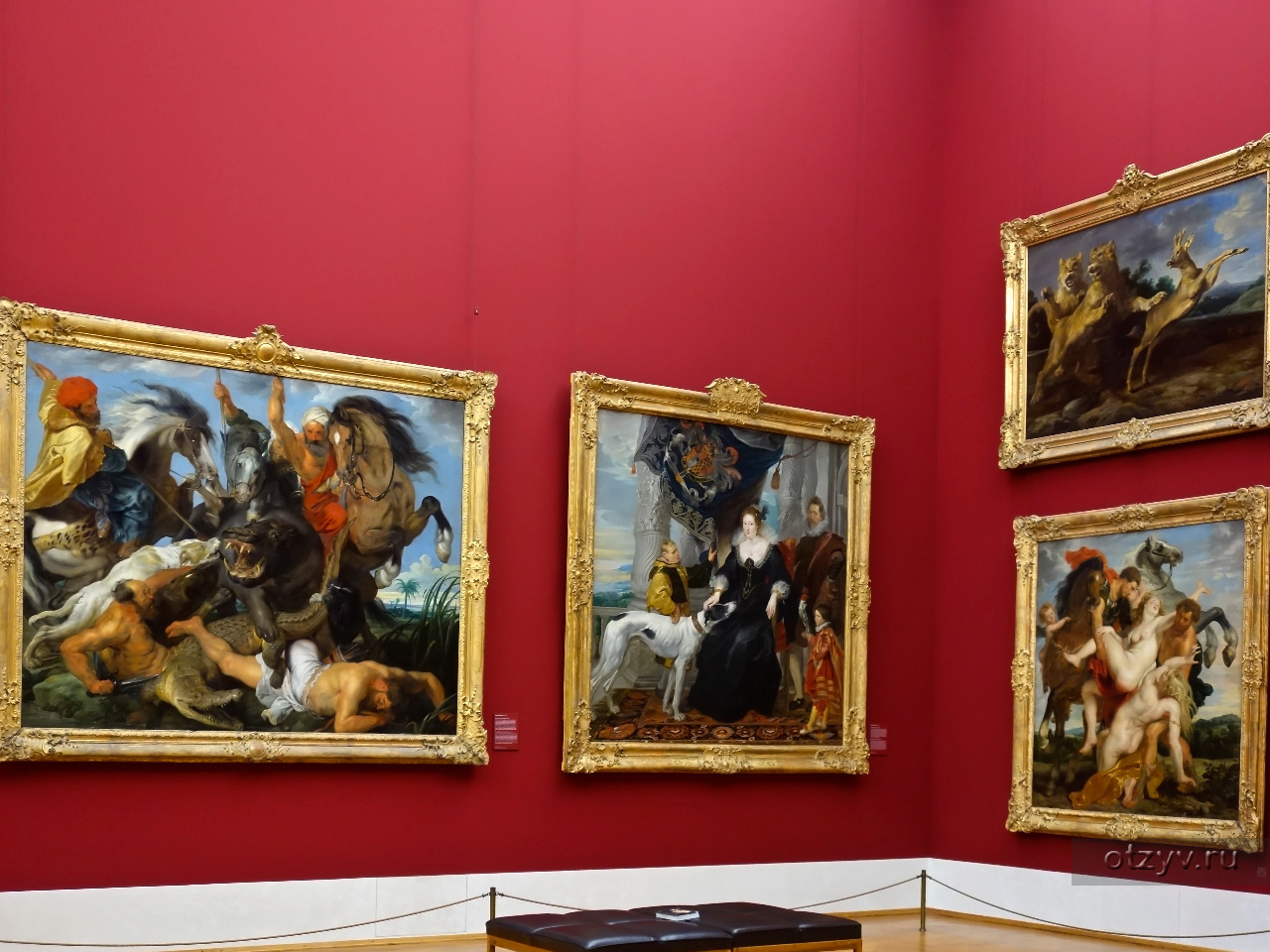 Part of the Munich Art Gallery, one of the most famous galleries in the world. Here are the works of masters of the Middle Ages, about 700 canvases, painted in the XIV-XVIII centuries. A distinctive feature of this collection is a deliberate extreme asceticism of decoration of the halls; the exhibits of the museum are only paintings. 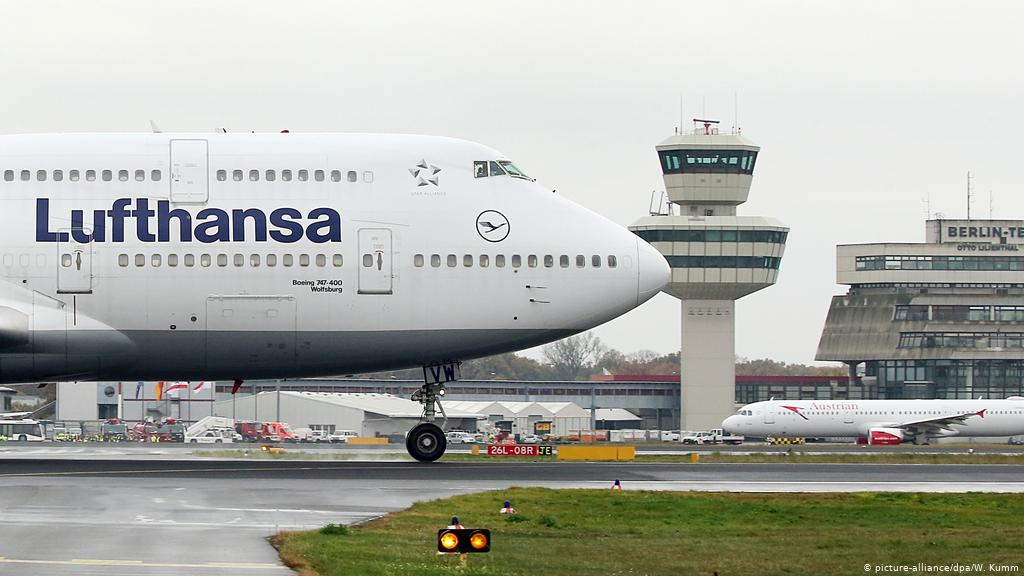 Germany, located in the center of western Europe, has an excellent system of  ground and air transportation. It is not a problem in getting to the country from anywhere in Europe and even the world, as well as traveling around the Germany. It is possible to fly in Germany on a very budgetary basis: about 30 - 35% of all flights are made by low-cost airlines (discounters).

Germany has the largest rail network in Central Europe, carrying two billion passengers annually. The length of railway lines is over 33 th km. High-speed traffic between cities is carried out by the Intercity-Express (ICE) network, which provides a speed of 160 - 330 km / h. The high-speed train traffic map is as follows: 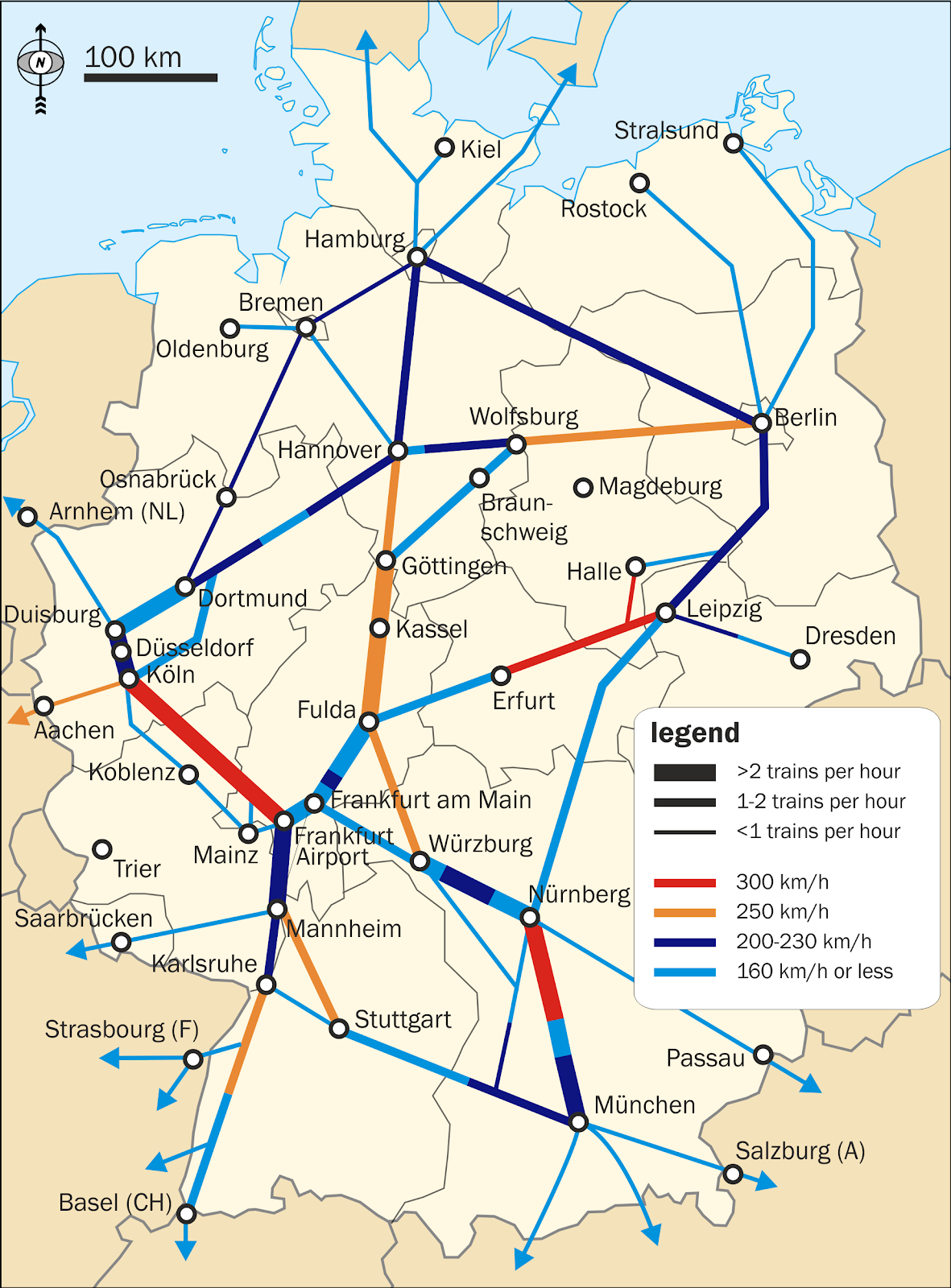 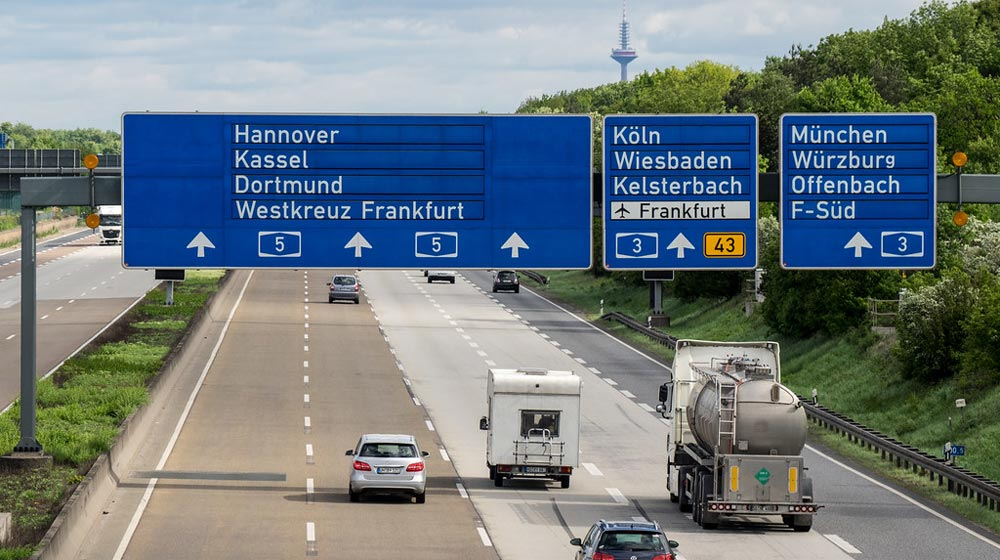 Germany's autobahns are the 4th longest national road network in the world, after China, USA and Spain; it is about 13 th km. The German autobahns are famous all over the world among lovers of fast driving because they have practically no speed limits. They are designated by the letter "A" and the number. The longest autobahn in Germany - the A7, has a length of 962 kilometers and leads from Austria to Denmark. 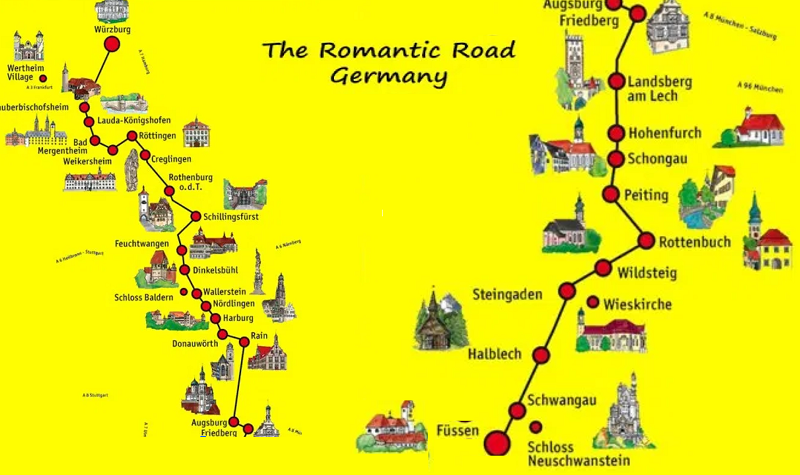 One of the most popular tourist route: germany romantic road is  a 360-kilometer scenic route connecting 28 attractions of Bavaria and Baden-Württemberg. It is recommended to take this route from north to south, starting from Wurzburg. Then the Bavarian Alps, one of the most beautiful regions in Europe, will remain “for dessert”. The route connects the historic cities of Würzburg and Augsburg, the three medieval fortified cities Rothenburg ob der Tauber, Dinkelsbühl and Nördlingen, and ends with the most popular among tourists Neuschwanstein Castle and the Alps. The route can be traversed using public transport, car, bicycle or on foot. When traveling by bike or on foot, it is better to start the route in the south: it is easier to go down from the foothills of the Alps than up.