Where is Italy? Basic information about the country 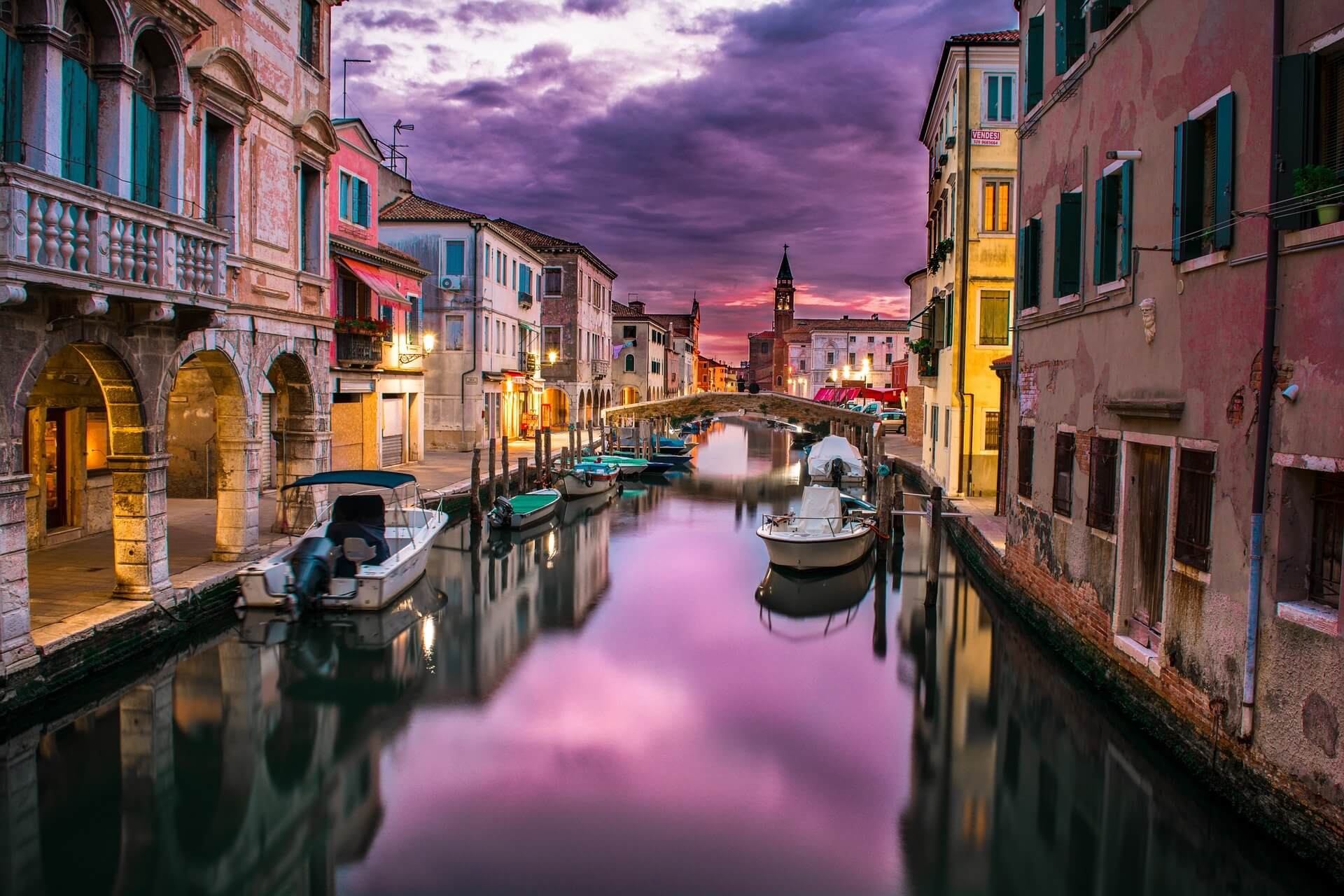 The official name of the country is the Italian Republic (Repubblica Italiana). It is a country located in southern Europe and occupying the very center of the historical Mediterranean region.

Italy is located on the European continent, has land borders with the following European states: Slovenia, France, Switzerland, Austria; and maritime borders with Greece, Montenegro, Croatia, Albania and Malta.

Also, on the territory of the country, two dwarf enclave states, the Vatican and San Marino, peacefully coexist.
The country is currently a parliamentary presidential republic characterized by a multi-party system (about 50 active parties joining in coalitions) and a parliament consisting of two chambers. In Italy, the head of government is the prime minister.

The economy of this warm country is in third place among European countries. Italy is also eighth in the world in terms of GDP. The country is still feeling the consequences of the 2008 crisis and the country's accession to the European Union, which led to a long slowdown in economic growth, an increase in unemployment, and a decline in production.

Italy is ranked 29th in the world on the Human Development Index, GDP (nominal) is $ 1.98 trillion, $ 36.4 thousand per capita.
The tourism industry in the country is highly developed. Italy is in fourth place in the world in terms of the number of tourists (423.6 million people). In total, there are more than 6.6 thousand cultural sites in Italy, and the following directions can be distinguished from the total passenger traffic:

The climate can be summarized as subtropical Mediterranean: warm, sometimes humid. The famous Alpine mountain ranges prevent the penetration of cold winds and air masses into the country, the sea environment by a kind of accumulator of heat and moisture. The air temperature depends on the time of year and the place of measurement. For example, in the summer in the south of Sardinia, the temperature rises to 45 degrees thanks to the strong hot sirocco wind. In mountainous areas frosts of up to -20 degrees occur.

Italy is divided into 20 regions. 5 of them are autonomous regions, because they are the residence of ethnic minorities. 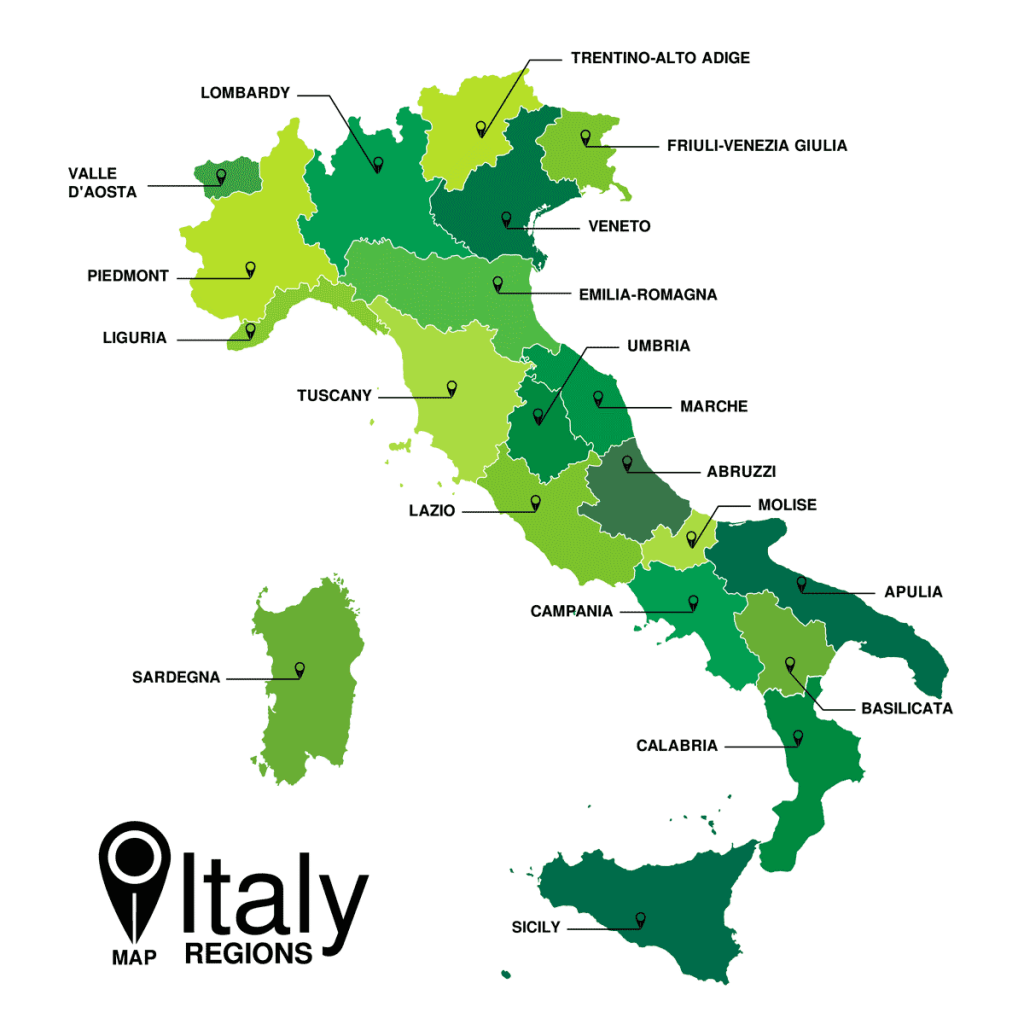 Friuli Venezia Giulia. It is located in the north-east of the country, borders the European states of Slovenia and Austria. Has 4 official languages ​​on its territory: Friulian, German, Slovenian, Croatian (in addition to the official Italian). The area of ​​the region is 7.9 thousand km², inhabited by 1.2 million people (density is 153 people per km²). The administrative center is the city of Trieste.

Sardinian and Italian. The population is 1.6 million, with a density of 68 inhabitants per km². The capital is the city of Cagliari.

Venice. Region in the north-east of Italy. It is the most famous center of tourism. The capital is Venice. Region has a population of 4.9 million. The area of ​​the region is 18.3 thousand km² (population density is 267 people per km²).

The most interesting sights of Italy 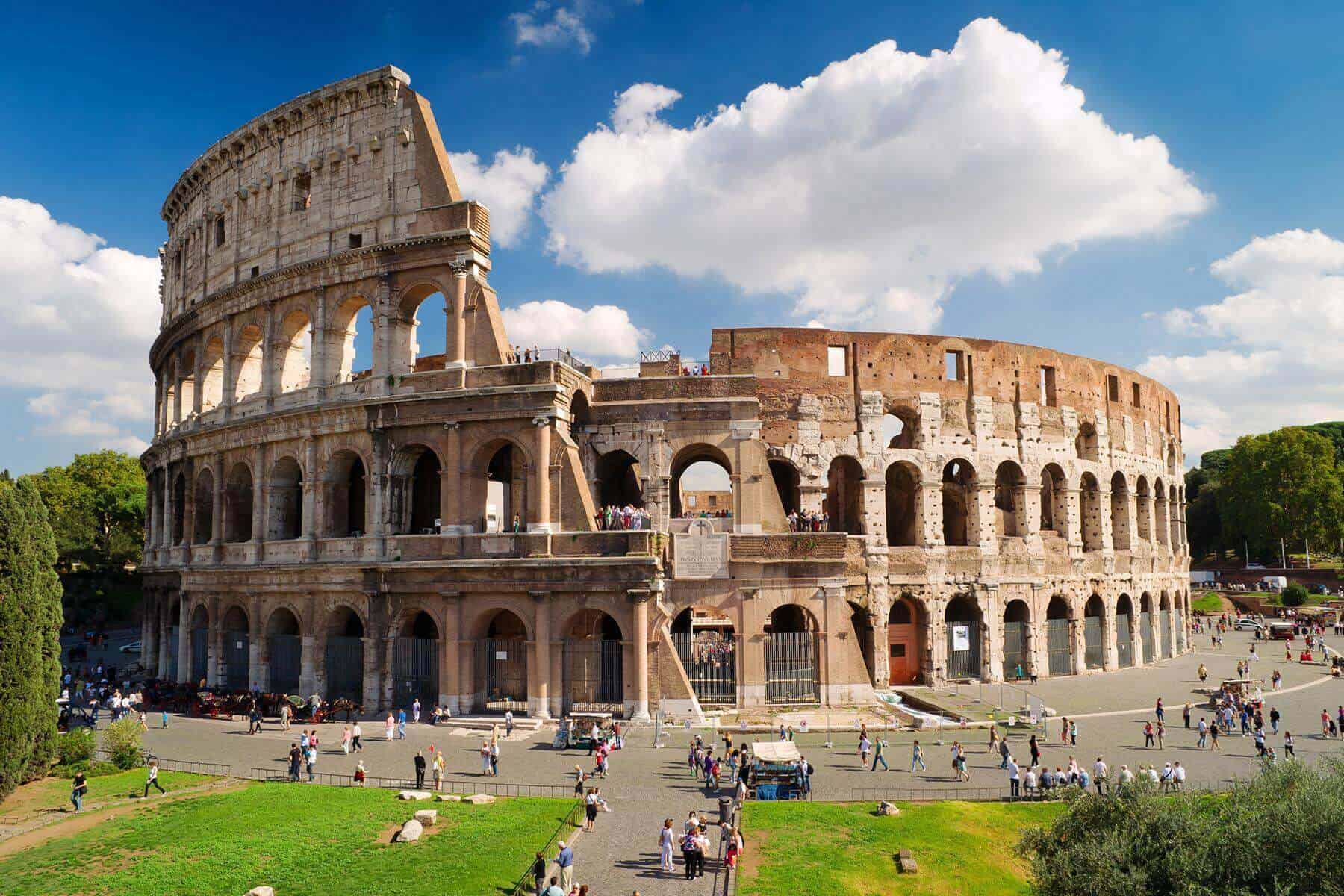 https://thearchitecturedesigns.com/
This magnificent building is the main of the antique cultural monuments that have survived to this day. The Colosseum is the most famous amphitheater (a round roofless theater built around the arena) in the world. In ancient times, buildings of this design were used for mass performances of various orientations, mainly gladiatorial battles and animal baiting. They were very common, most of the large cities could boast their own amphitheater.
The building of the Colosseum differs from its counterparts in terms of capacity, because it could simultaneously accommodate up to 50 thousand spectators. The Colosseum is almost two thousand years old, and it was built quite quickly, it took only 8 years.

Subsequently, the Colosseum has been selected as one of the seven new wonders of the world.

It is a symbol of today's Rome, and very powerfully creates the atmosphere of ancient Rome.

https://www.vogue.it/
The visiting card of Florence is a grandiose Catholic cathedral with a total area of ​​more than 8 thousand square meters. It was built in the Italian Gothic style. Geographically located on Cathedral Square, in the historic center of the city. The legacy of several generations of great Florentine architects (at least six specialists worked on it sequentially), the cathedral was built for more than a hundred years. It is recognized as the unspoken symbol of the city with a graceful exterior and amazing decoration of several types of marble.
It was the largest European cathedral at the time of construction. Building could accommodate almost the entire population of Florence. It is worth visiting Florence, according to many tourists visiting the historic city center, just for the sake of this magnificent work of art.
Location: Piazza del Duomo, 50122 Firenze FI, Italy

The Grand Canal in Venice 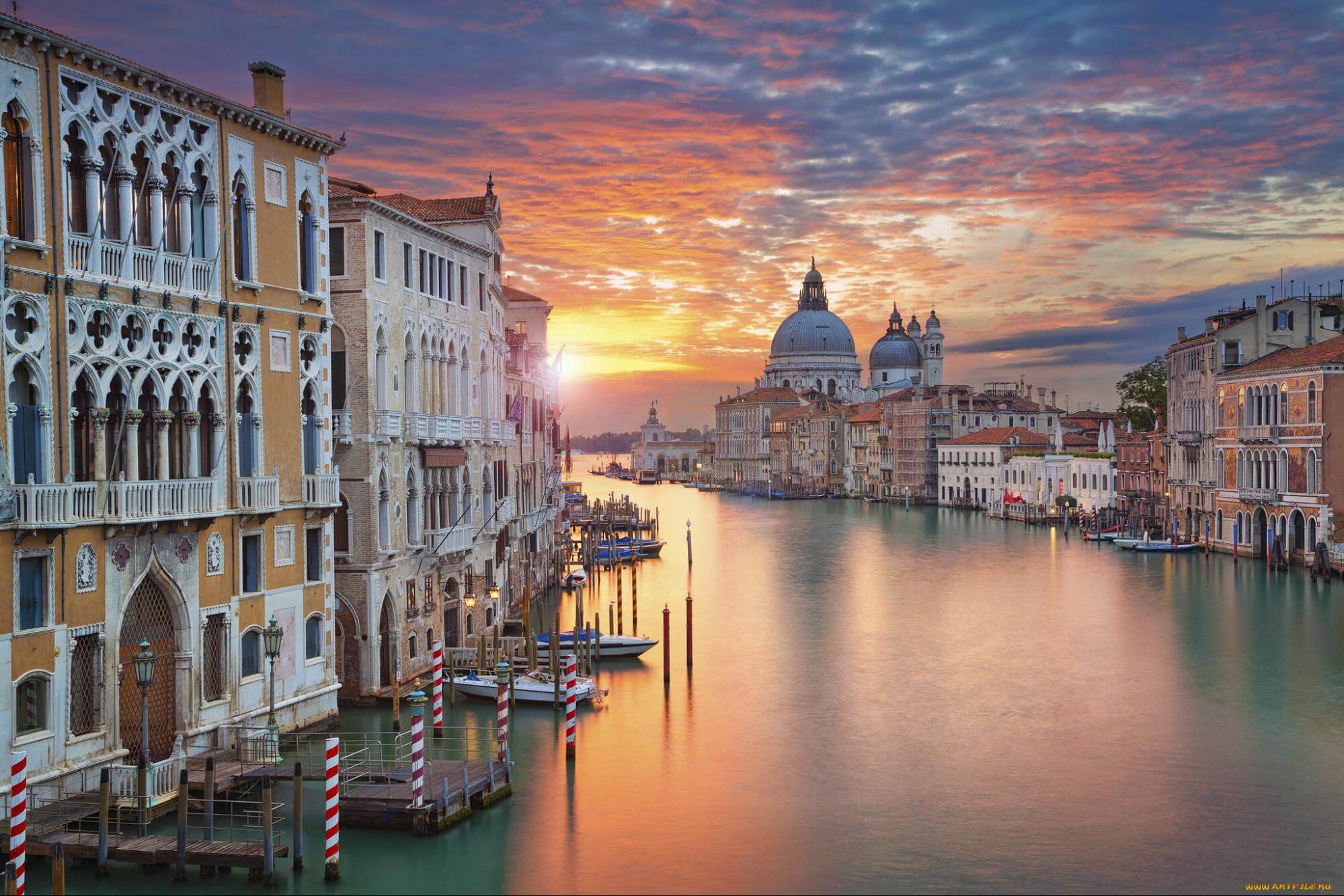 Being in the past one of the sea routes through the lagoon, now the Great Canal has become the "main road", the "main avenue" of Venice. It is one of the main sights of Italy. This key artery of the city allows you to see and imagine exactly the very Venice, which is shown in films and advertising brochures, where endless water spilled between houses and streets, and all movement takes place by boats. This is a kind of historical center, where there are no berths, but the exit from the palaces (up to eight centuries old) is made both to the dry side and to the water of the canal.

The depth of the channel is more than 5 meters, the width is from three to nine tens of meters, and the length is about 4 kilometers.

You can get around the Grand Canal by private and public transport, gondolas and river trams are used in these roles. Tourists are extremely positive about traveling along this large-scale sea route, the impressions of the walk are “for life”.
Location: 30100 Venice, Metropolitan City of Venice, Italy 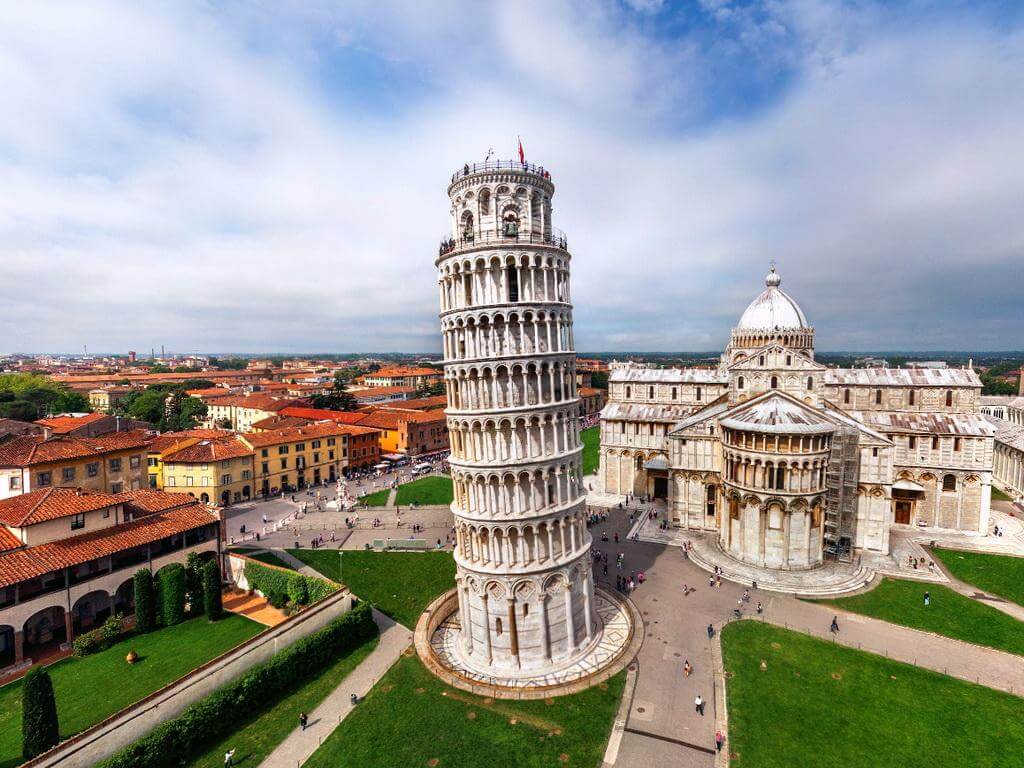 The bell tower of the cathedral in the city of Pisa, of which there are seemingly many in Italy, attracts with its uniqueness: it is this tower that gained worldwide fame due to a non-standard defect, the tower has a strong slope.

This fact arouses interest and attracts tourists from all over the world, because the desire to visit such a tall building before it finally falls is very great! The feeling is enhanced by the fact that there are no elevators in the building, and when moving along the corridors and stairs (which is more than two hundred steps), that slope is very well felt.

In addition, the falling bell tower in Pisa is part of an attractive ensemble of buildings on the city's Square of Miracles, which are made of marble. Beautiful interesting buildings, a clean park for walking, picnic and relaxation around, the wonderful climate of Italy. And the mixed styles in the architecture of the ensemble look attractive and original. 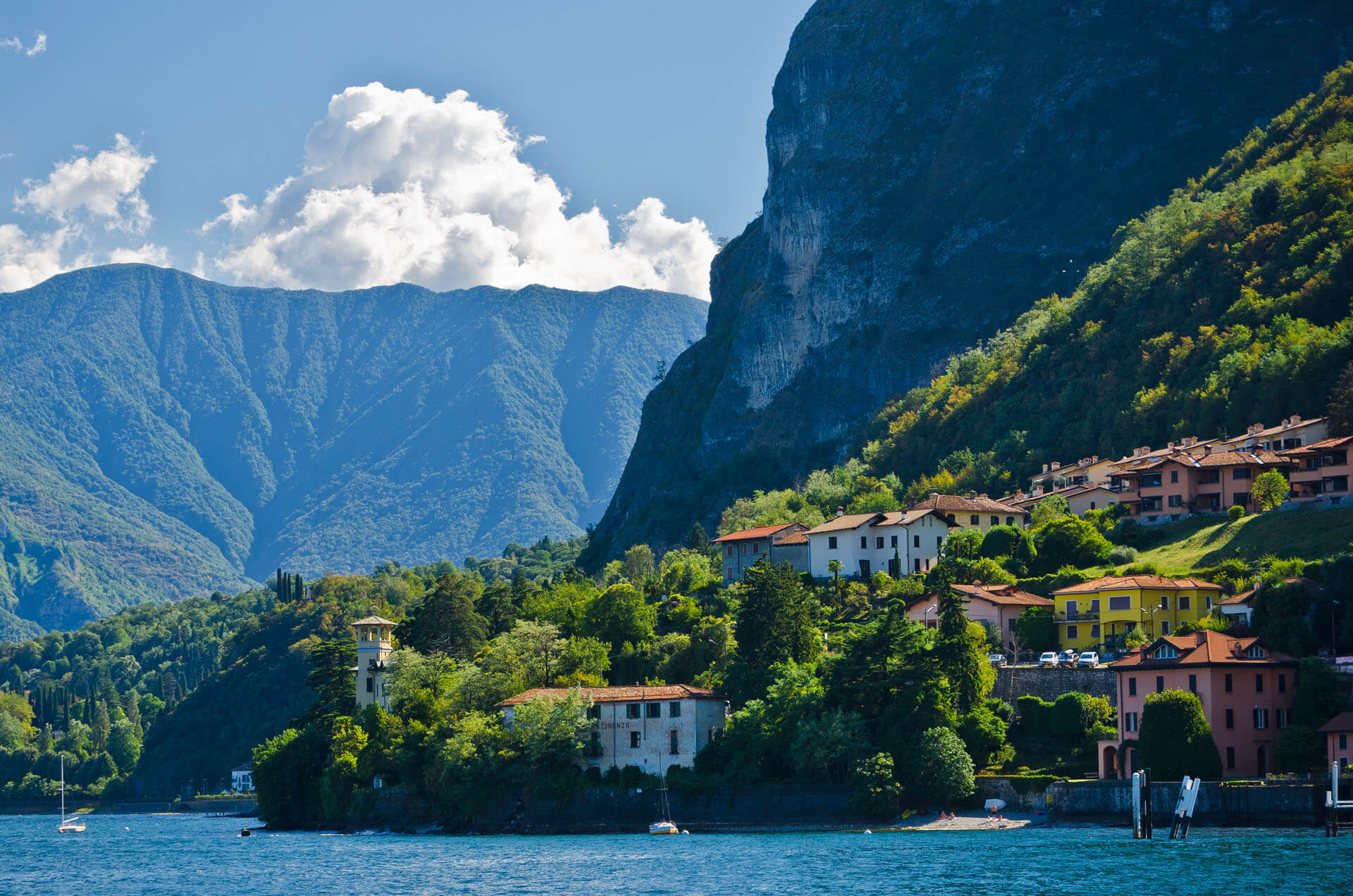 The lake north of Milan, near the foothills of the Alps, is one of the deepest in Europe. It is noteworthy that due to its location, this is an area of ​​incredible beauty (a combination of beautiful views of the lake itself, mountains, vegetation, towns with old buildings).
Romantic, breathtaking, scenic spots.

You can ride a car, ferry, boat; visit villas-museums, gardens, fountains and waterfalls, islands, and find impressive views everywhere.
Measured pastime, no fuss, calmness and slowness are poured in the air.

The lake looks especially beautiful from the foothills of the Alps, and vice versa, the views of the mountains from the boat striking imagination.

When visiting Milan, it is recommended to travel an additional 40 kilometers for relaxation. 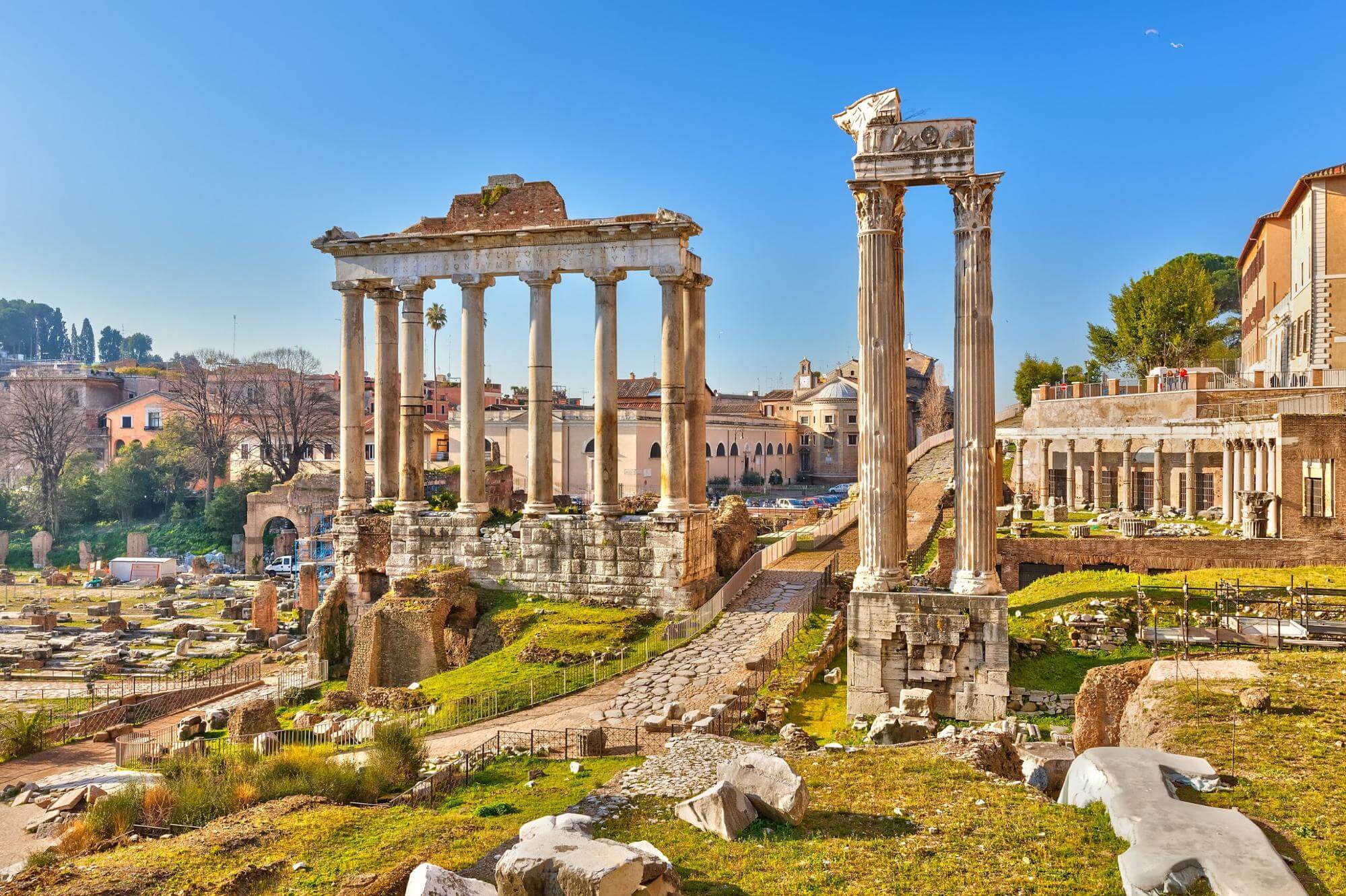 One of the monuments that the ancient Roman state left behind: a place that used to be a market, but later concentrated the social and political life of the capital of the great ancient empire, Rome.
An epic place, striking in scale and beauty, along with the Colosseum and the Palatine. A park where parts of the former greatness of the Roman Empire are preserved, where you can feel the ancient life and the atmosphere of the life of the capital of the empire through the centuries: parts of buildings, stucco and parts of preserved frescoes and old stones of temples that have now disappeared.

Occupies an impressive territory that can be walked around slowly in a few hours, where you can relax, and which is conveniently located between the Colosseum and the Vatican so you can plan a sequential visit to these three popular tourist attractions.

A powerful flow of tourists forces Italy to accurately and smoothly transport this human resource, which brings considerable income to the country's economy.

And if we take into account international tourists, among them, without a doubt, it is the air method of travel that is most popular.

Every major tourism center in the country has its own airport.

We present the map and list of the five largest airports below. 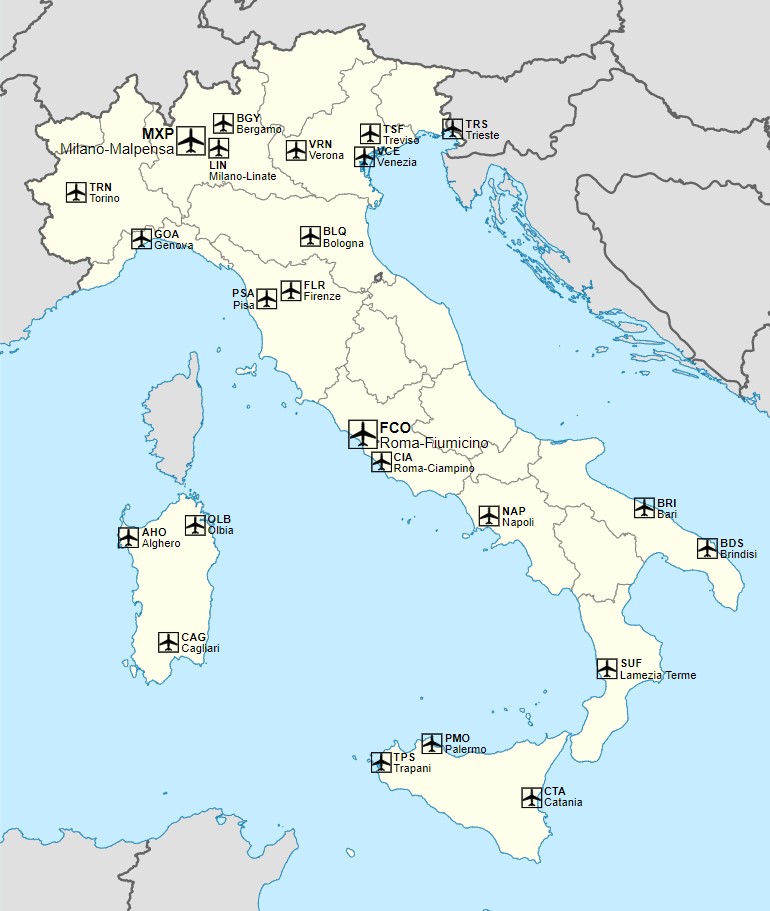 List of the five largest airports in the country:

Airport named after Leonardo da Vinci (Leonardo da Vinci), aka Fiumicino, so called by its location. It is a small town two dozen kilometers from Rome. Airport is the largest in Italy with at least 35 million passengers a year.

The total length of the Italian railways is more than 24 thousand kilometers. As a member of the European Union, Italy's rail links are tightly integrated into the common European rail systems, and have international links with France, Switzerland, Austria and Slovenia.

Emphasis is now placed on high-speed railways, with train speeds of up to 300 kilometers per hour and capable of competing with air travel over short distances. In the country, high-speed trains are engaged in the transportation of passengers at such speeds, in Italy it is TAV SpA (high-speed trains of the latest generation), which operate on the routes indicated on the following map: 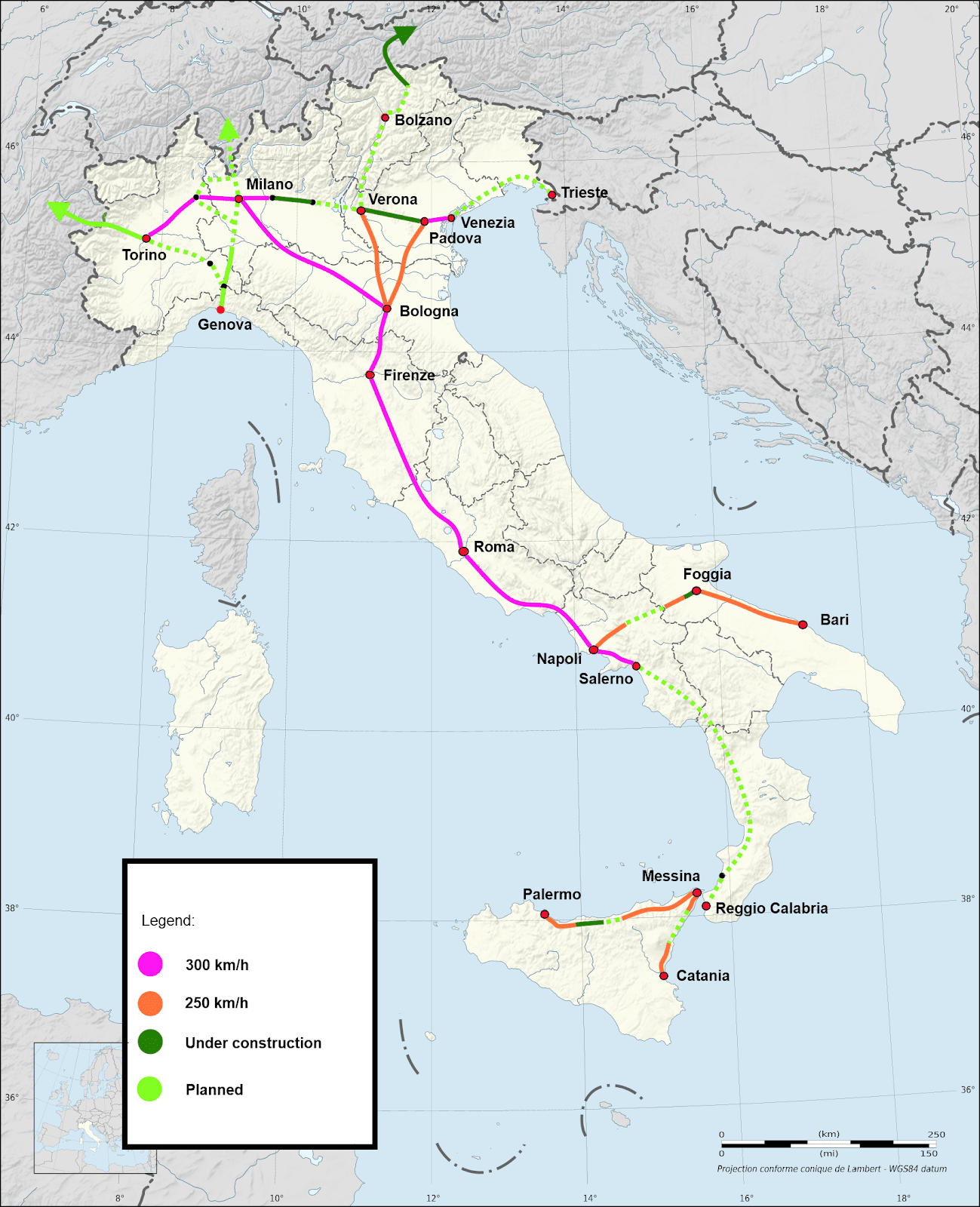 The largest railway station in Italy, and the fifth station in Europe in terms of annual passenger traffic (over 175 million people). It is located in the historical center of the city, next to the famous baths of Diocletian, in whose honor it is named. This is the largest train station in Rome with routes to Albano, Florence, Ancona, Naples and other cities.

Ranks second in Italy in terms of annual passenger traffic (at least 120 million people a year). It is the main railway station in the city. Station serves high-speed and regular routes from Milan to Bologna, Genoa, Venice, Verona, Turin.

Train station carries at least 70 million passengers a year. This is Turin's main station and serves both high-speed and regular trains; international connections are also available via Torino Porta Nuova.

Railway station transports about 60 million people per year (while ranking fourth in Italy). The most popular destinations that can be reached by using this station are Rome, Pisa, and Bologna.