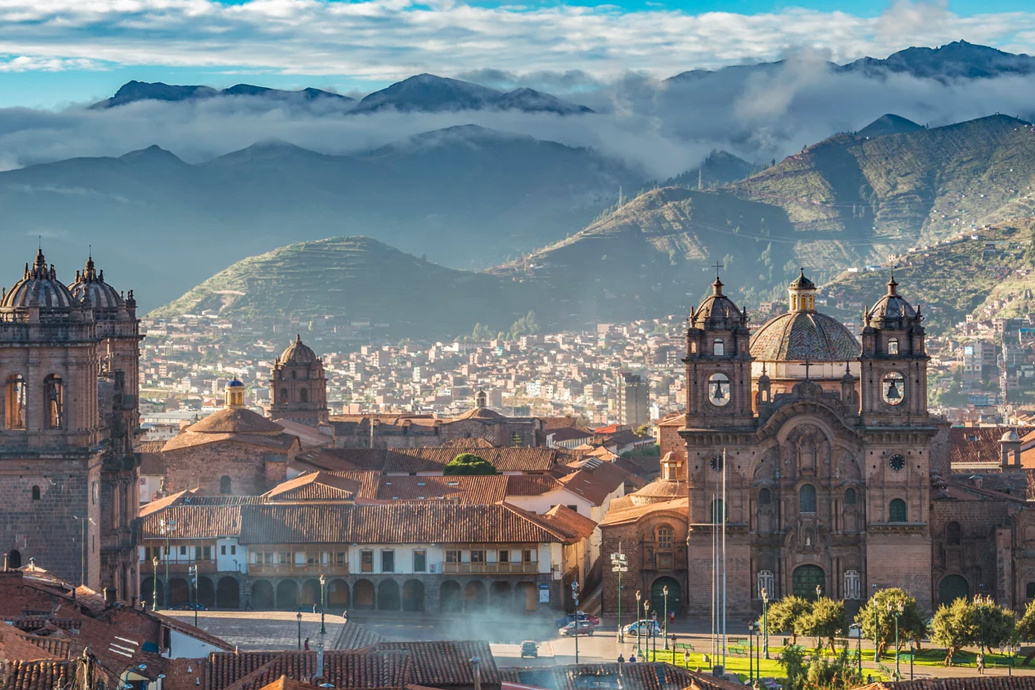 The Republic of Peru is the third largest country in South America (1,285,216 km², of which 8.9% is water). A country of great cultural heritage, incredible beauty and rich history. The first inhabitants of Peru appeared in the 10th century BC and today the population of the republic is more than 32.1 million people (density 24.3 people / km²). 52% of the population are of Indian descent. The state is adjacent to 5 countries (Bolivia, Chile, Colombia, Ecuador and Brazil). This country with a rich history attracts a huge number of tourists.

The capital is the city of Lima, which is famous for a variety of restaurants representing almost all the cuisines of the world.

Peru can be conditionally divided into three parts, which differ in climate, relief and even population:

At the same time, absolutely the entire territory of the country is located in an earthquake-prone zone, every year regions of Peru suffer from strong earthquakes.

At the head of the Republic of Peru is a president, who is elected by the inhabitants of the country for a 5-year term.

Peru is an agricultural country. The basis of the economy: mining, agriculture, extraction of natural resources. Tourism is one of the most important and rapidly growing sectors of the country's economy: more than 100 thousand architectural monuments, developed ecotourism in the Amazon, exquisite gastronomic tours, and natural resources. More than 3 million people visit Peru every year.

Despite the rather low unemployment rate (6.2%), about 45% of the population in the country is below the poverty line.

Peru has a three-tier administrative division into:

*** Another 8 regions, in addition to Piura, (La Libertad, Arequipa, Cajamarca, Junín, Cusco, Lambayeque, Puno, Ancash) have a population of over 1 million people. 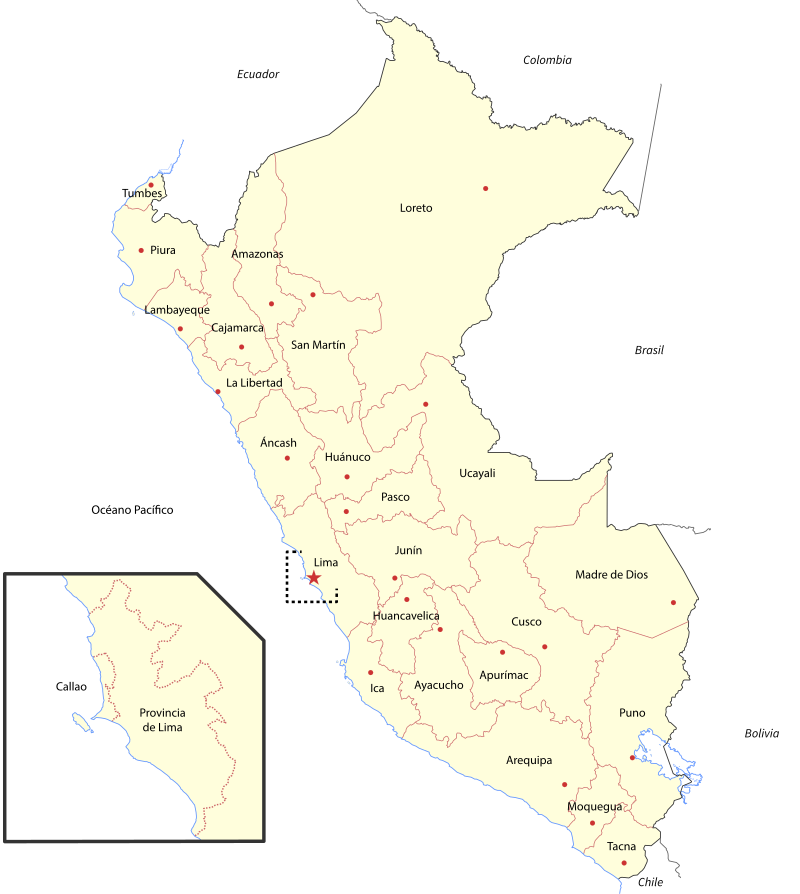 The most interesting sights of Peru 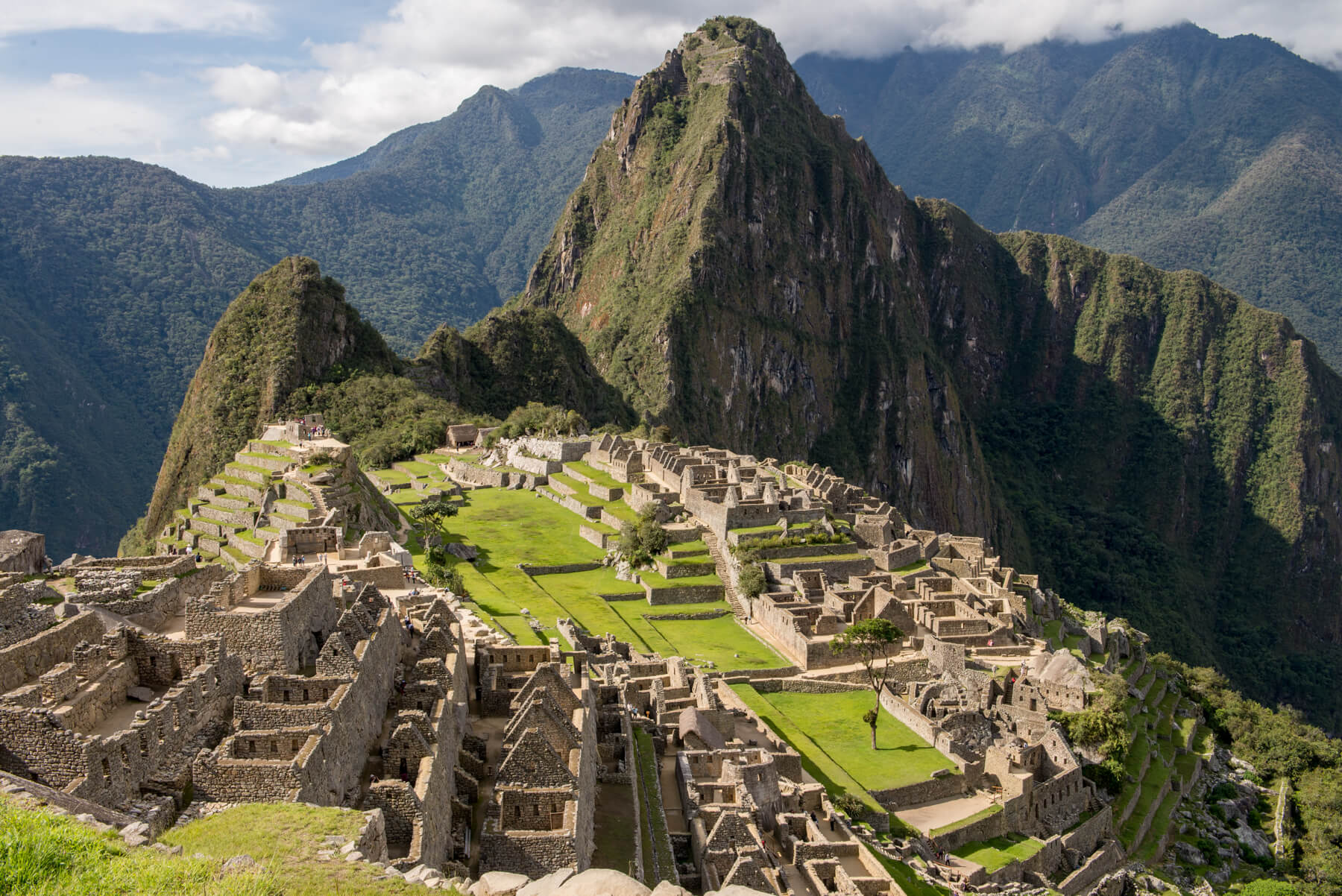 Machu Picchu (Old Mountain: translation from Quechua). One of the oldest cities in America is located 124 km from the city of Cusco, on the top of a mountain range (height 2400 m). It is often called the city among the clouds. Today it is one of the most important centers of world tourism. Included in the list of the Seven New Wonders of the World.

Machu Picchu is a symbol of the greatness of the ancient civilization: only great masters with deep knowledge could build such a city in such an area. About 200 structures were erected in the city (the temple complex: the Temple of the Sun, the Temple of the Condor, the Temple of the Moon; palaces and houses of the nobility; a tower with a sanctuary; a ritual square; a residential area with 2-storey buildings, warehouses, etc.). All buildings are made of high quality processed stones that fit tightly to each other. The city itself has a very clear structure. The inhabitants of the city worshiped the sun god.

In order to make this unique place more accessible, a railway was built from Cusco to the Aguas Calientes station from where tourists need to overcome an 8-kilometer serpentine road with a steep rise by bus.

The attraction has become so popular that a limit was imposed on the number of people who can visit the ancient Inca city per day (2500 tourists, of which only 400 can climb Mount Huayna Picchu).

The Inca Trail is one of the TOP 5 best hiking trails in the world and is the most visited in Latin America. A 43-kilometer trail connects the city of Cuzco (the capital of the ancient Inca Empire) and the legendary city of Machu Picchu. The hike along the Inca Trail takes several days, and each of them will not be like the previous one. Various landscapes will change one after another: plains, forests with dense vegetation, the trail will lead up and wind down, revealing unique views.

Only 500 people can walk the trail every day, of which only 200 are tourists, and the rest are guides and porters. The trail has four difficulty options (from 2 to 7 days of movement). 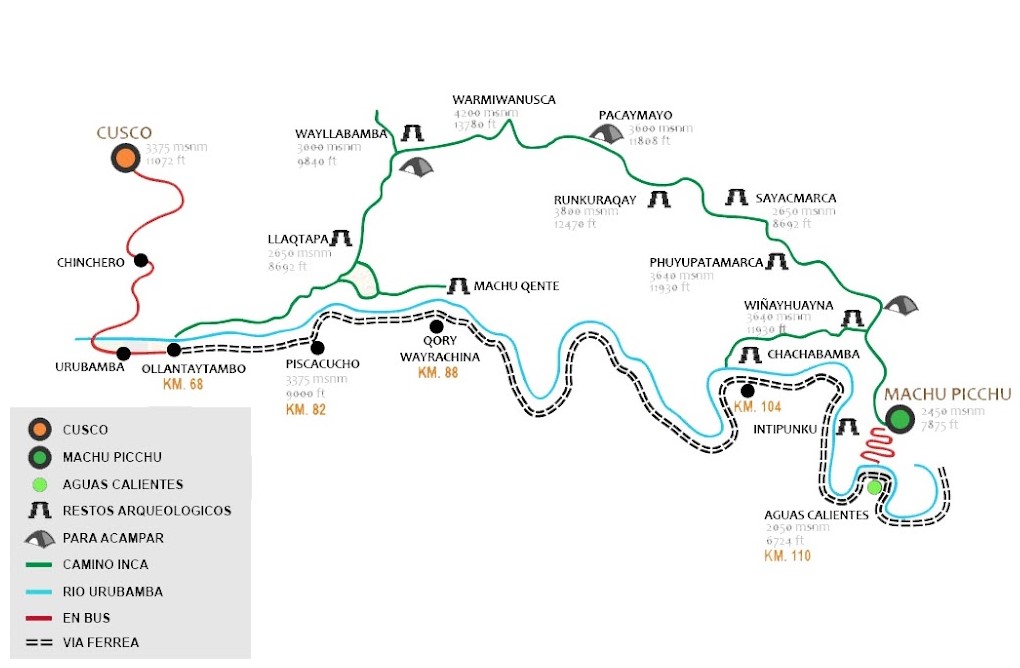 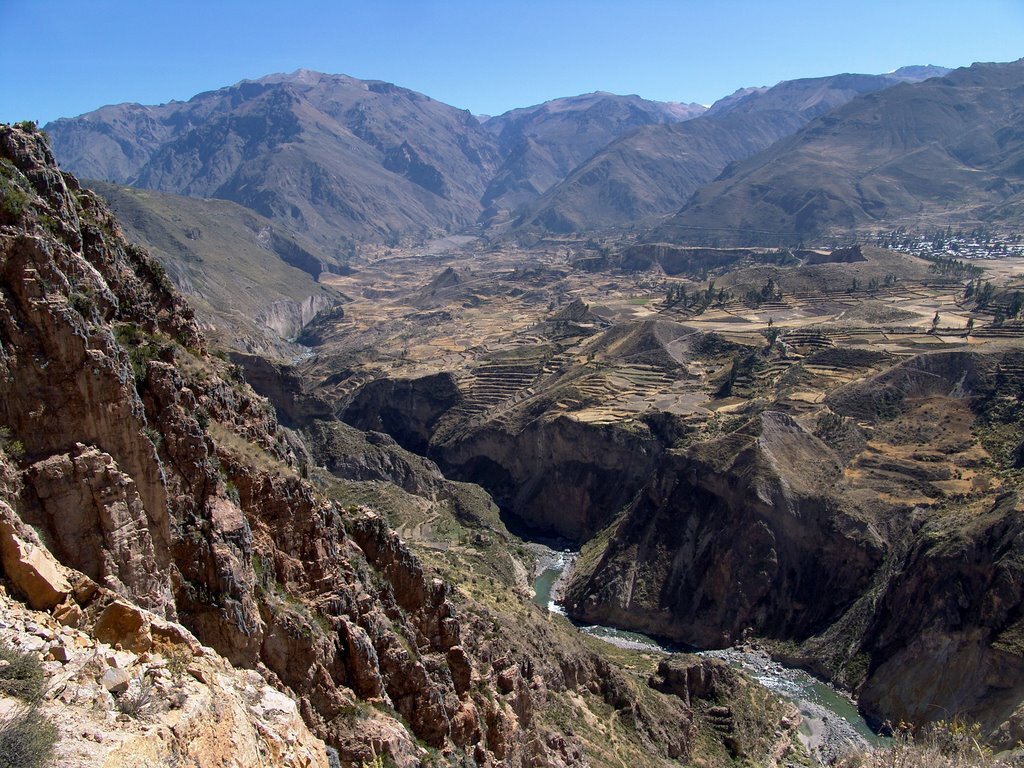 A unique natural attraction of Peru: Cotahuasi canyon is one of the deepest canyons in the world. The canyon is located 375 km from the city of Arequipa and covers an area of ​​just over 490.5 thousand hectares.

Cotahuasi ranks second in Peru in the depth of the gorge (3354 m), yielding leadership to the Colca Canyon (4160 m), which is more visited by tourists.

The waters of the Kotausi River, whose source is at an altitude of 4750 m, heading towards the Pacific Ocean, formed a fantastically deep gorge with high indented slopes, terraces and deep ravines. Since 2005, the Cotahuasi River Valley has been a landscape park and nature reserve.

Today this protected area has great biodiversity: it is the habitat of such rare animals and birds as the Chilean flamingo, vicuña, caracara, hummingbird, Andean condor; as well as a place where many endemic plants grow.

The relief of the canyon is perfect for trekking, rock climbing, kayaking, as well as for exploring the traditional way of life on the farms of the local population. 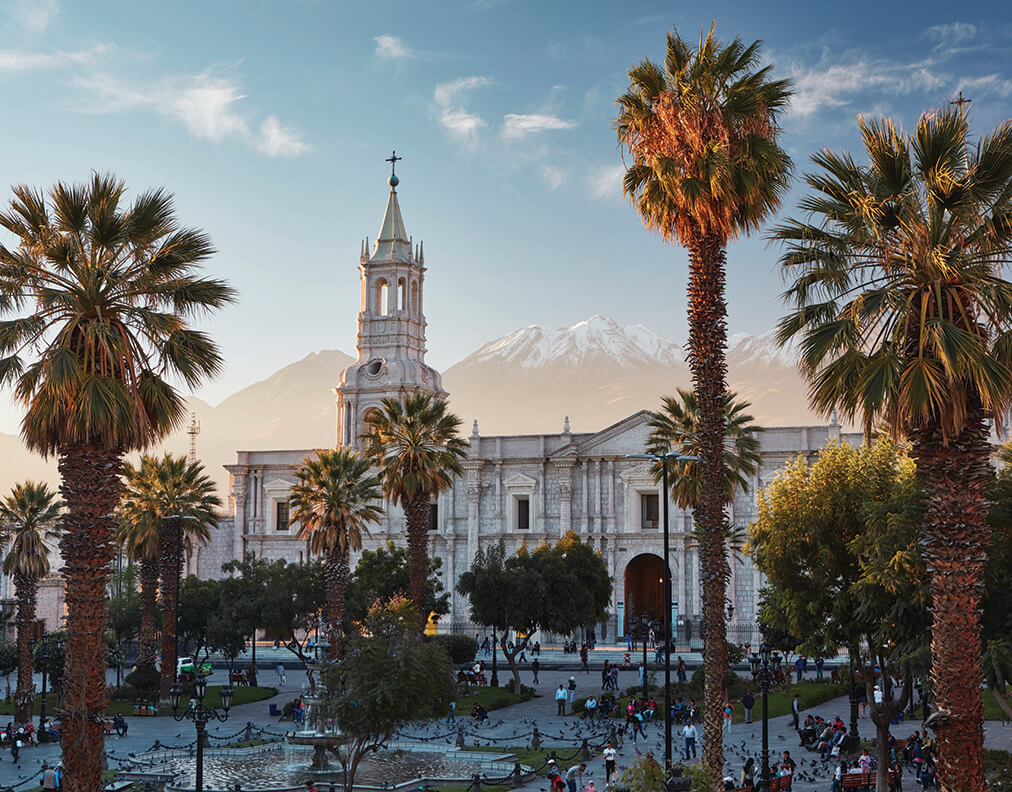 Arequipa is a millionaire city, the capital of Peruvian cuisine, a ‘white city’ located between the Atacama Desert and the Andes at an altitude of 2335 meters at the foot of the dormant El Misti volcano.

In 2000, the historic center of Arequipa city was declared a UNESCO World Heritage Site. This historical monument of colonial architecture was the result of the painstaking work of unique craftsmen and the use of a variety of building technologies. The profession of stonemason is revered today.

The city center is built in the Sillar volcanic rock. Structures with solid walls of white volcanic stone are decorated with numerous vaults, arches, decor of the facades in the Baroque and Neo-Gothic style:

More than 1.5 million tourists visit the southern capital and second largest city of Peru every year. 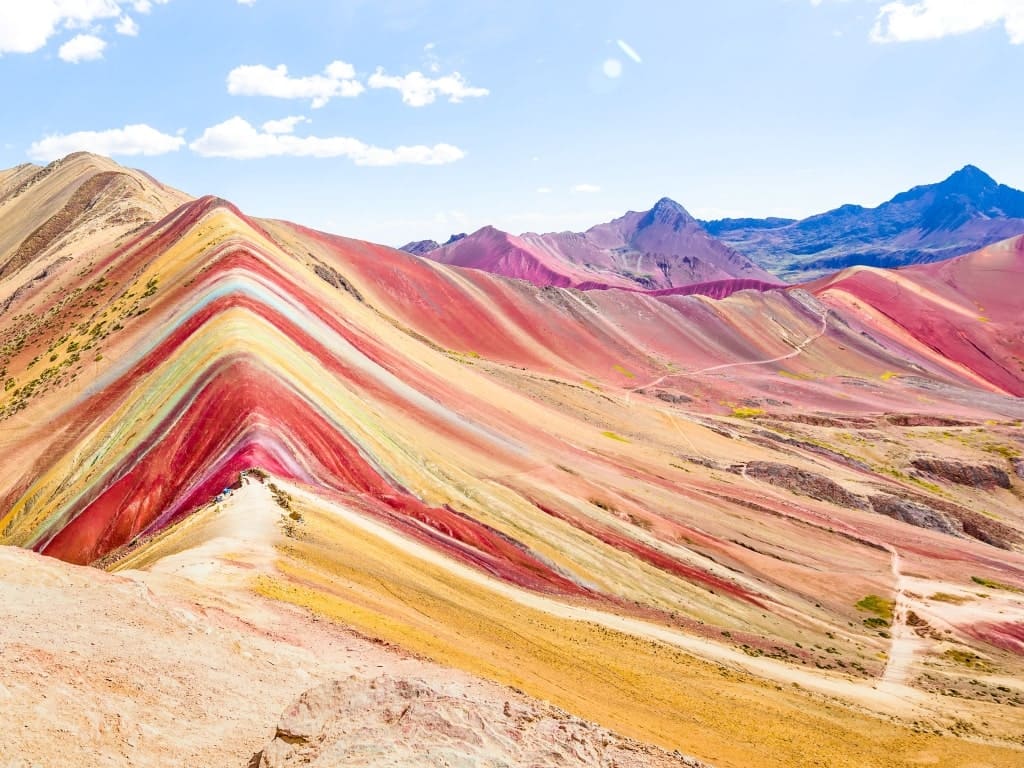 The rainbow mountain Vinicunca (Montaña de seven tones, Montaña de Colores) with a unique mineralogical composition that paints the slopes in colorful stripes is a real miracle of natural centuries-old creativity. The vibrant landscape attracts tourists from all over the world. The mountain is located in the Andes Mountains in the Cuzco region southeast of the city of Cuzco. Its height is 5200 meters above sea level.

The colored stripes are due to the mineral composition of the rocks:

At the foot of the mountain there is a temple, in which a ritual festival is held annually dedicated to the deity Apu, who personifies mountain spirits.

Climbing the observation deck requires acclimatization and good physical condition. The difficult path is repeatedly compensated by the stunning views of Vinicunca, climbing which is prohibited in order to protect against vandals.

The best time to visit is August (dry season). The time of day and the season affect the degree of intensity of the color spectrum (in the brightest colors the mountain is colored by the rays of the sun at dawn).

Geoglyphs of the Nazca Desert 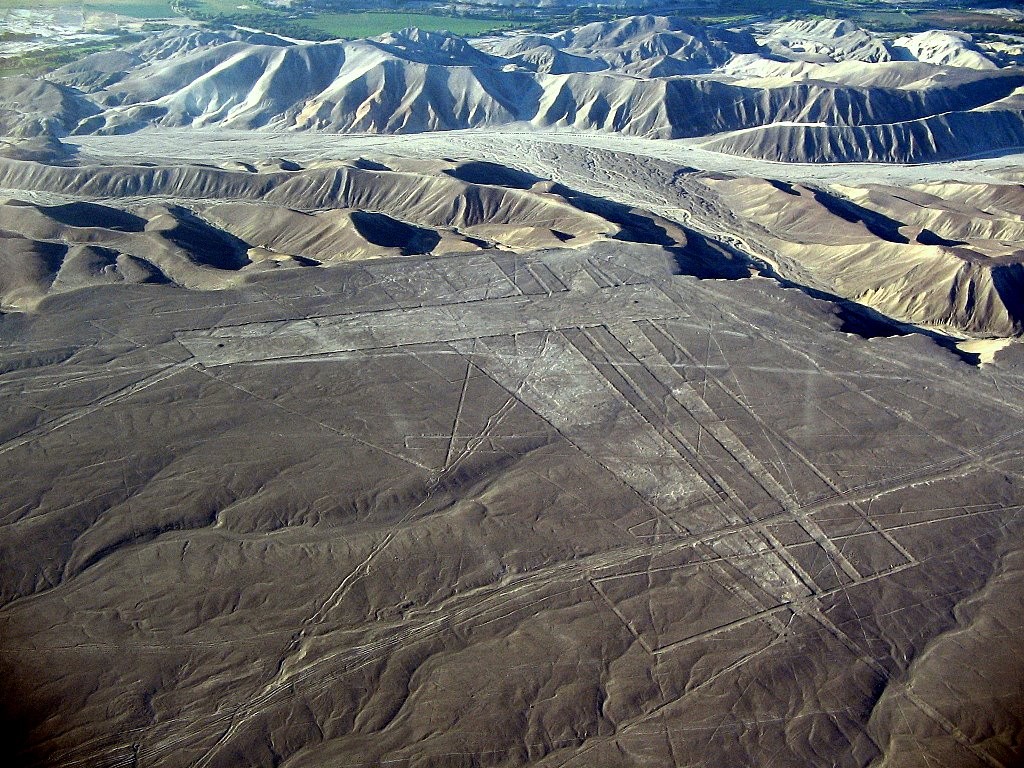 Giant geometric figures (geoglyphs) on the lifeless sandy Nazca plateau are one of the most mysterious sights of our planet. There are several versions of the origin and purpose of the Nazca geoglyphs. But so far, the answer has not been found. The approximate age of the mysterious pattern dates back to the middle of the first millennium AD.

In total there are:

The lines of geoglyphs are made in one continuous line by removing soil and forming trenches 30-50 cm wide and 10 cm to 1.5 meters deep. Perfect lines and stripes, which cannot be reproduced even with the most modern technologies and equipment, amaze scientists and attract millions of tourists every year. The lines remain perfectly straight despite the topography of the plateau's surface. Since the contour of the figures is clearly visible only from a great height, excursions on small planes are provided for tourists.

Since 1994, the geoglyphs of the Nazca plateau have been included in the UNESCO World Heritage List, and the territory is strictly protected. 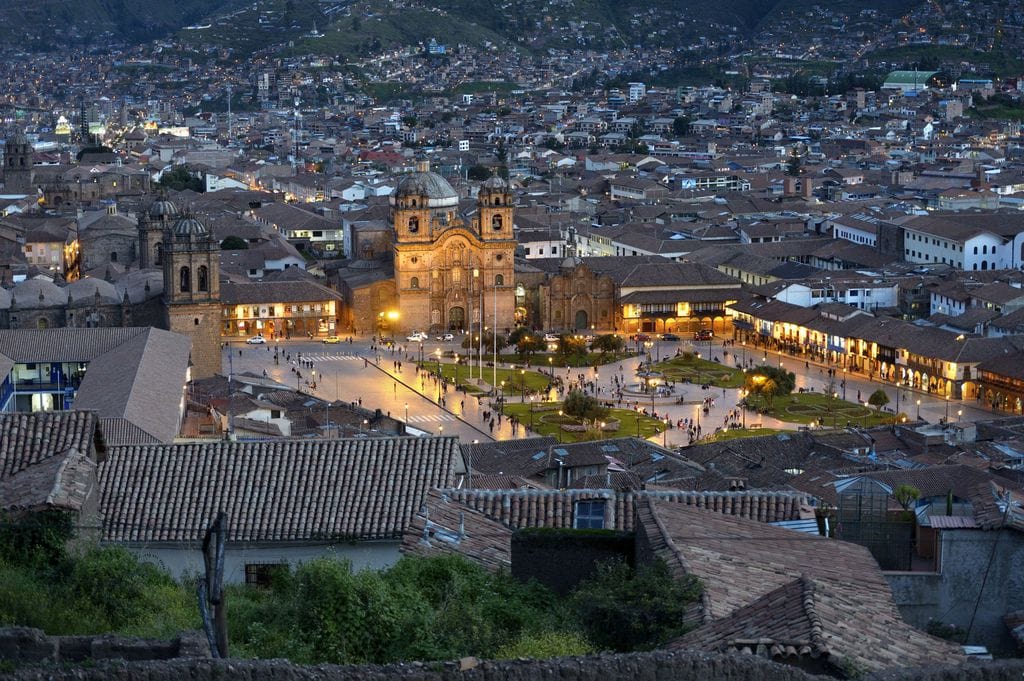 Plaza de Armas is the city center. The magnificent square, four streets wide, occupies an entire block (140 meters). In the past, the square was both a place of trade and a place of execution. And today it is one of the most comfortable and beautiful colonial squares in the world.

Along the perimeter of the square there are historical architectural monuments of the city, socially significant buildings:

The central place on the square is occupied by a bronze fountain, installed in 1650. 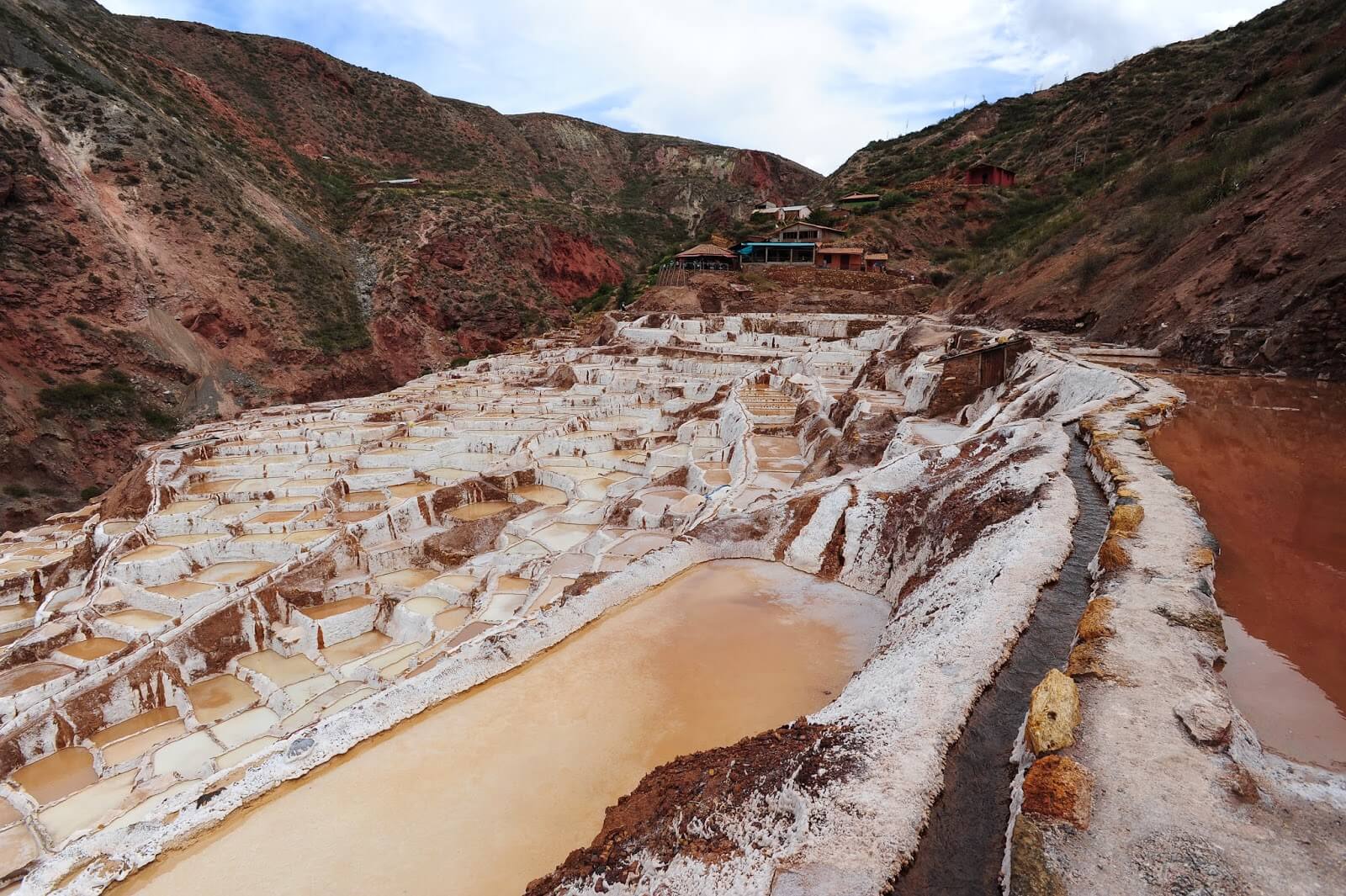 The small town of Maras is located 40 km from the city of Cuzco at an altitude of 3300 meters. It is one of the oldest settlements in the Sacred Valley of the Incas, famous for its Salinas de Maras salt terraces. Once a thriving city, nowadays it has become an ordinary province, the inhabitants of which are engaged in the extraction of salt.

The salt mines are located 5 kilometers from the city and represent more than 3 thousand cascading baths (wells-terraces) on a steep slope, which collect water from the hot salt Qori Pujio spring at the top of the mountain. Water evaporates during the month under the influence of the sun and wind, leaving a thick layer of salt.

The area of ​​the tanks is on average 5 m². Up to 150 kg of salt is extracted from one reservoir per year. Salt is divided into grades depending on the purity: from white to terracotta.

All terraces are shared between the inhabitants of the settlement and are inherited.

Peru has 234 airports serving local and international destinations. Of these, 44 airports with a paved runway, and 190 with unpaved ones. Air transport in the country is well developed, since due to the peculiarities of the relief, some places can only be reached by air. 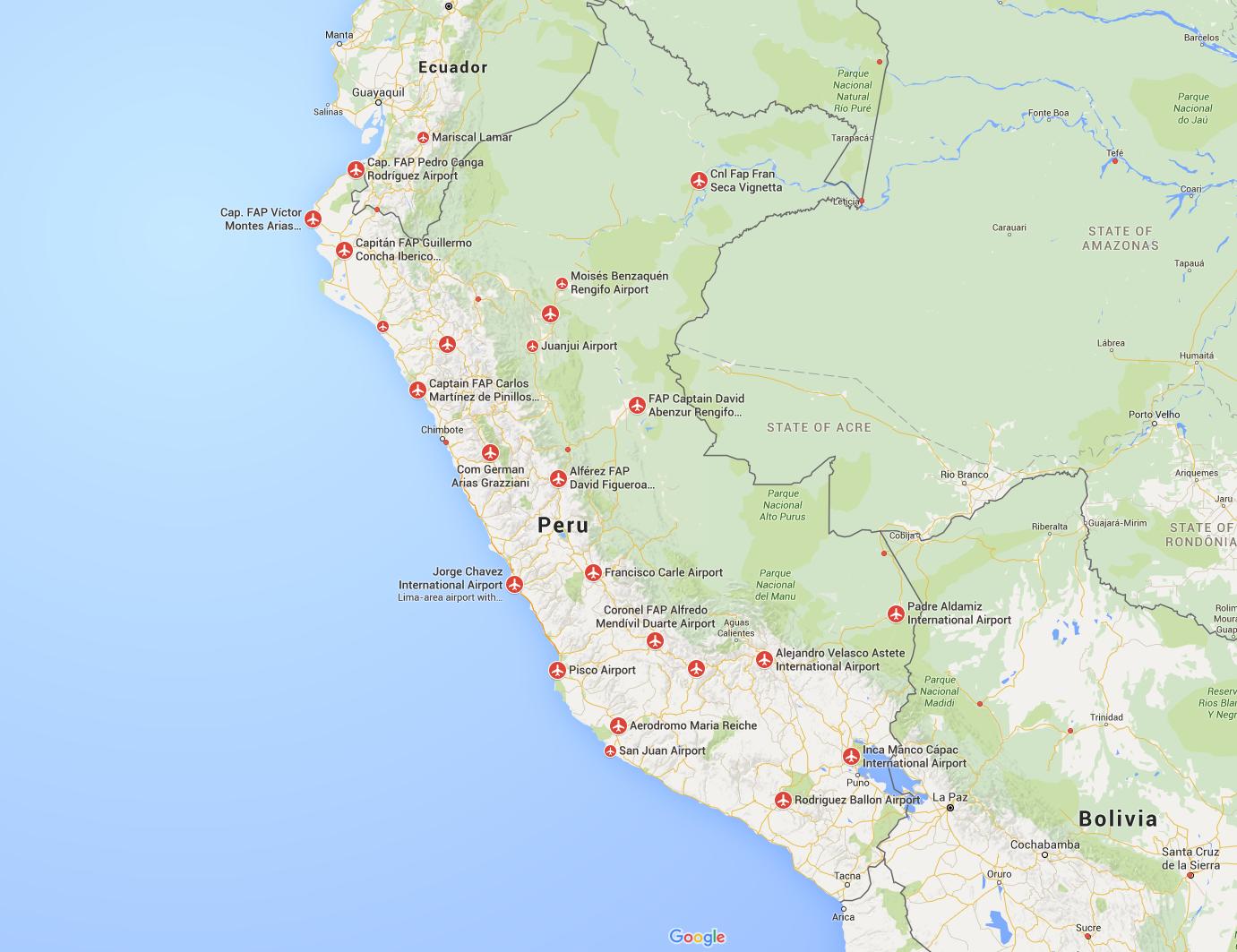 Rail transport in Peru is considered the most accessible and, accordingly, the most popular among local residents. The main problem in the development of this type of transport is mountainous terrain, which complicates the construction of a railway line. Therefore, railway transport in the country has not become widespread. 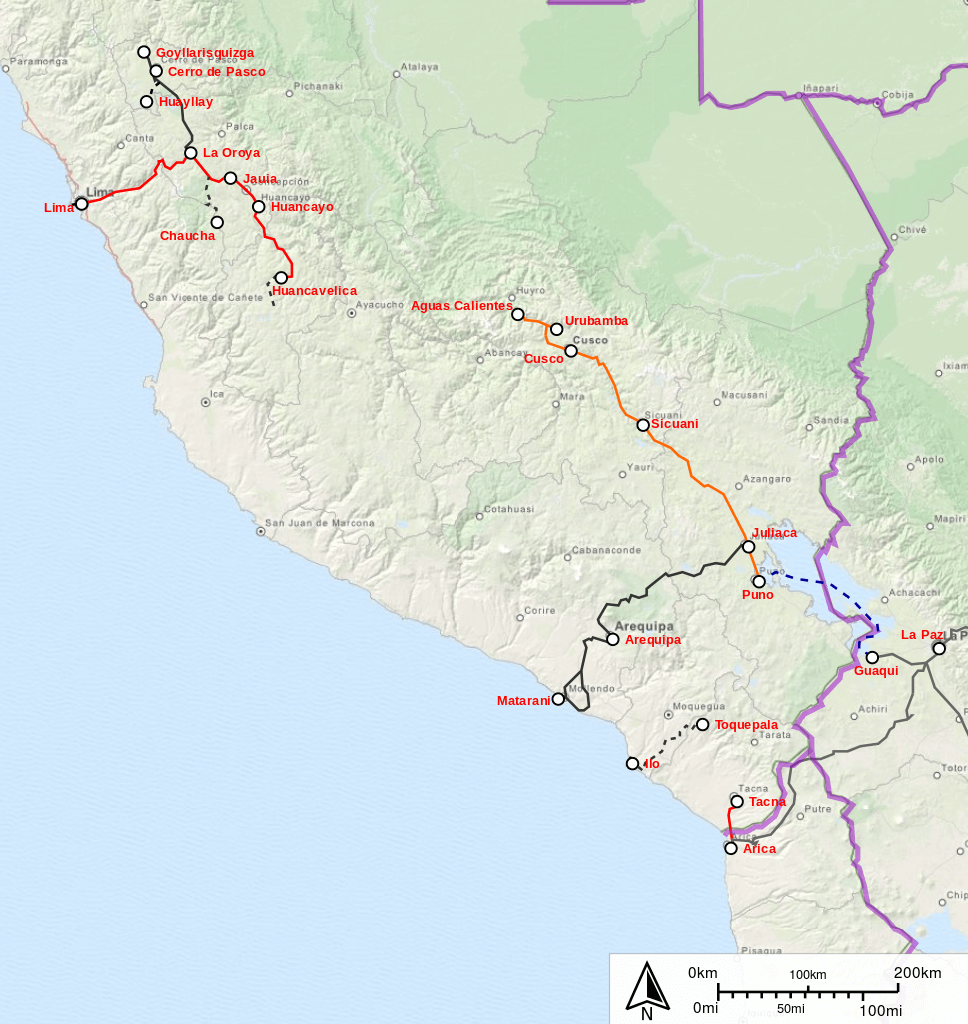 The total length of railways is 1,854.4 km. Trains are often overcrowded, which should be taken into account by tourists planning to visit this country.

There is no unified railway network in Peru. As a rule, these are separate lines belonging to private organizations, which were built mainly for the transport of goods.

The Central Railway (Ferrocarril Central del Perú) includes Peru's first railway (1851) and is the second highest high-altitude railway in the world. Most of it passes at an altitude of over 4000 meters (62 bridges and 677 tunnels, one of which is at an altitude of 4783 m). There is no regular passenger traffic. 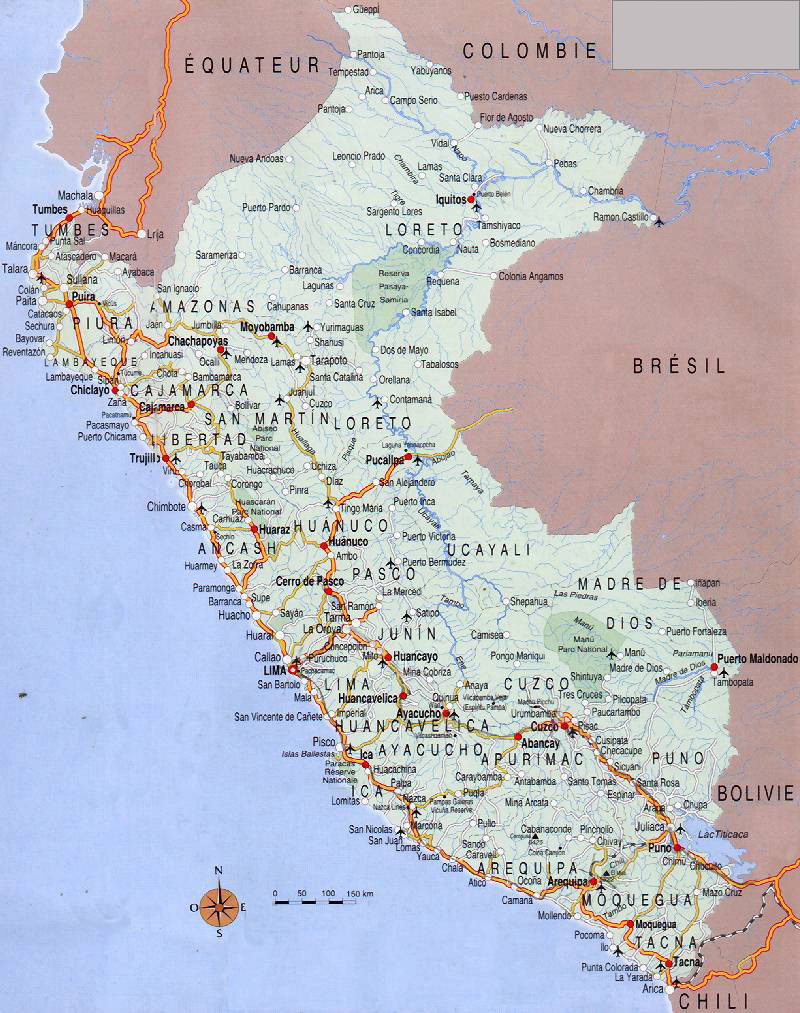 Pan American Highway: the longest highway in the world along the Pacific coast of the highway reaches the city of Lima (Peru). Further, the highway forks (and one branch goes through the city of Arequipa). This is the only convenient road in Peru (its length is 2.5 thousand km) with a high-quality surface.

In general, Peruvian roads are of poor quality: 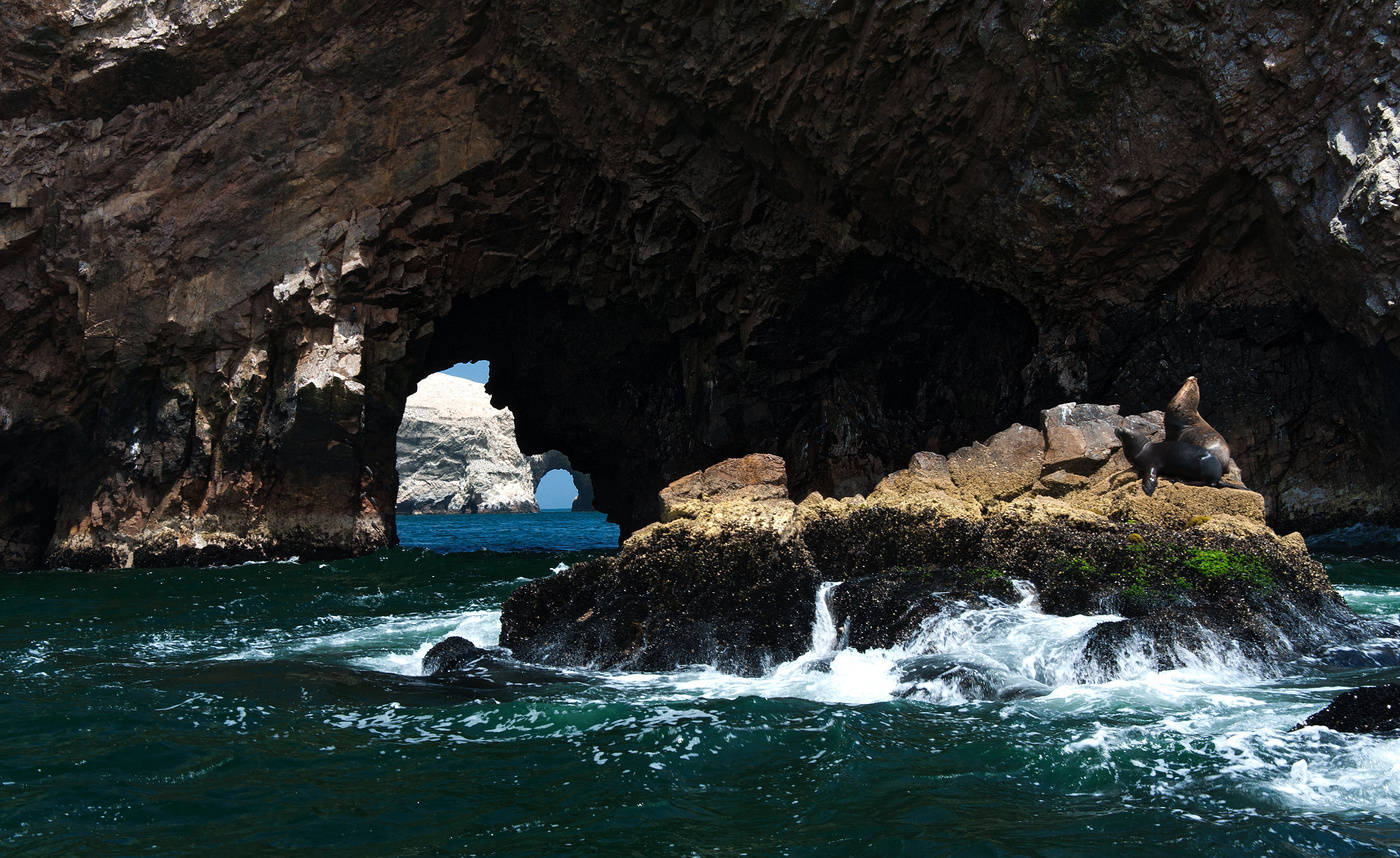 20 km from the city of Pisco, not far from the Peruvian Paracas National Reserve, in the waters of the Pacific Ocean there is a small group of rocky Ballestas Islands. This small archipelago (total area 0.12 km ²) includes three large islands and many small rocks.

The Ballestas Islands are a conservation area ideal for eco-excursions. The islands can only be reached by water. Tourists are not allowed to land on the island. Only bird watchers and guanero are allowed to observe bird paradise and collect guano. Guano (bird droppings) is highly regarded as a fertilizer and cosmetic ingredient, and Peru is one of the largest suppliers of this natural treasure.

The islands are very picturesque due to their arched shape. In addition, despite the very small area, the islands are home to many different birds and marine animals, including:

In the ocean, during a boat trip, you can meet a flock of dolphins.

The Ballestas Islands are a place where the power of nature appears in all its splendor.