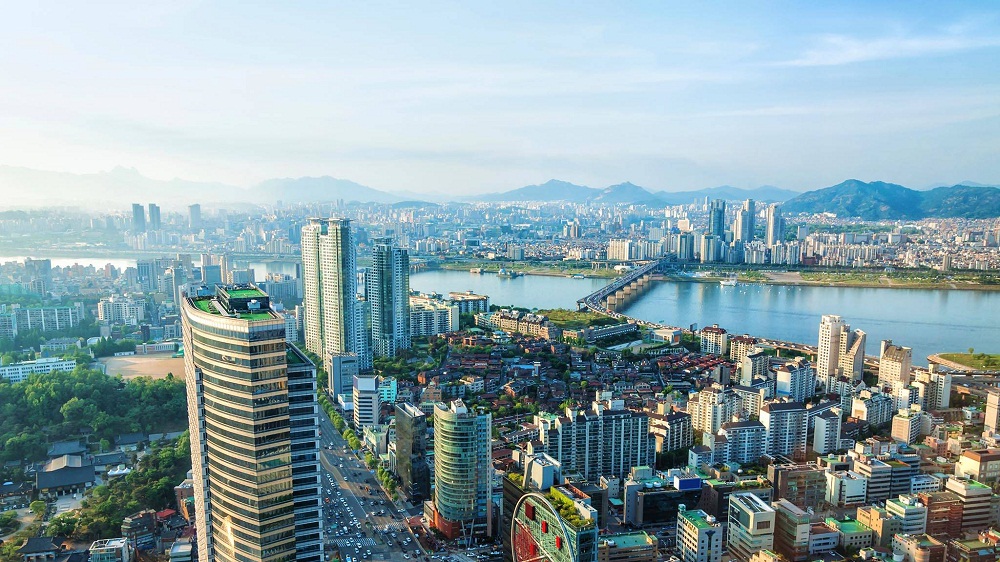 South Korea (officially the Republic of Korea) is a modern, rapidly developing country in East Asia. Covers an area of ​​100 210 km² (290 km² are water resources) in the southern part of the Korean Peninsula. The mono-ethnic state is inhabited by more than 51.7 million people (density 517 people / km²), 96% of whom are Koreans. The capital is Seoul. The only land border is with the DPRK, the sea border is with Japan. On three sides, the territory of the Republic of Korea is washed by the waters of the Yellow, Japan and East China Seas.

In this mountainous country, only 30% of the territory (mainly in the west and south) is occupied by plains, where the bulk of the population is concentrated. There are about 3 thousand islands belonging to South Korea in the coastal zone. Most of them are uninhabited.

Mixed forests, which cover mountain slopes everywhere, are rich in flora and fauna. In the Republic, in which the protection of nature is the most important principle of state policy, there are more than 20 natural parks.

South Korea is dominated by a temperate monsoon climate, which is characterized by:

Annual precipitation is 1000 mm, most of which falls between June and September.

The best time for tourist trips is spring.

One of the poorest states of the mid-20th century, South Korea is today an industrial country with a developed economy and is one of the countries occupying a leading position in the world economy (GDP of 1.64 trillion dollars, 44.6 thousand dollars per capita). The Human Development Index (HDI) is very high at 0.916. Career growth and education are important components of culture.

The basis of the economy: heavy industry, legal proceedings (45% of the world market), high technology, light industry. For the last 20 years, the service sector has occupied 71.5% of the republic's economy.

South Korea is a unitary secular state headed by a president.

The traditional religion is Buddhism: today 22% of the population are Buddhists. Christianity has recently become firmly established in the life of 30% of South Koreans. But at the same time, about half of the population remain atheists and are not adherents of any of the religious trends.

The Republic of Korea has a very low crime rate and ranks among the safest countries in the world. 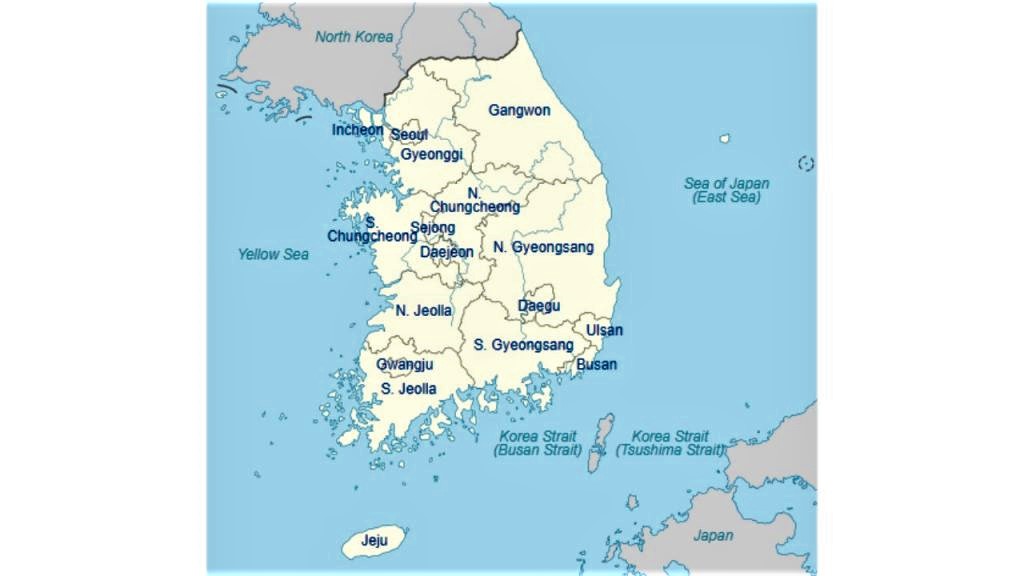 The Republic of Korea is divided into 17 administrative divisions:

The most interesting sights of South Korea 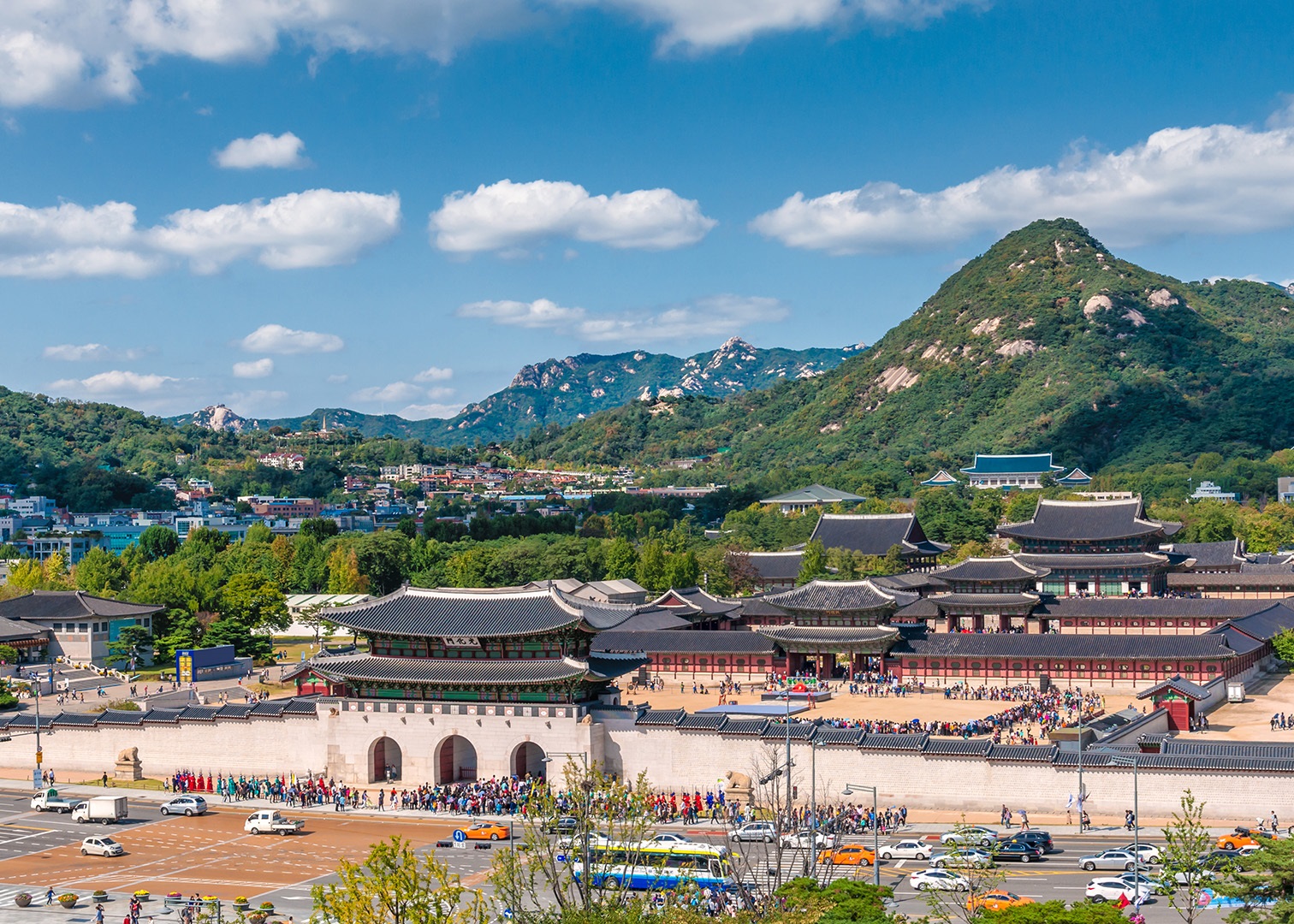 In the north of the capital of the Republic of Korea is the majestic royal temple complex Gyeongbokgung (Northern Palace). The complex was built in 1394 and was the most important and largest palace of the Joseon dynasty (the last family that ruled for more than 500 years). The total area of ​​the complex is 410 thousand square meters. Today it is a huge open-air museum set against the backdrop of mountains. After reconstruction, the complex has 330 buildings and 5792 rooms. 10 buildings are open for viewing for tourists, the main of which are:

Every hour from 10:00 to 15:00, a royal changing of the guard takes place in front of the main gate of the Palace.

Every year, millions of tourists visit Gyeongbokgung: one of the main and popular attractions in South Korea, which immerses in the atmosphere of the life of the royal family. 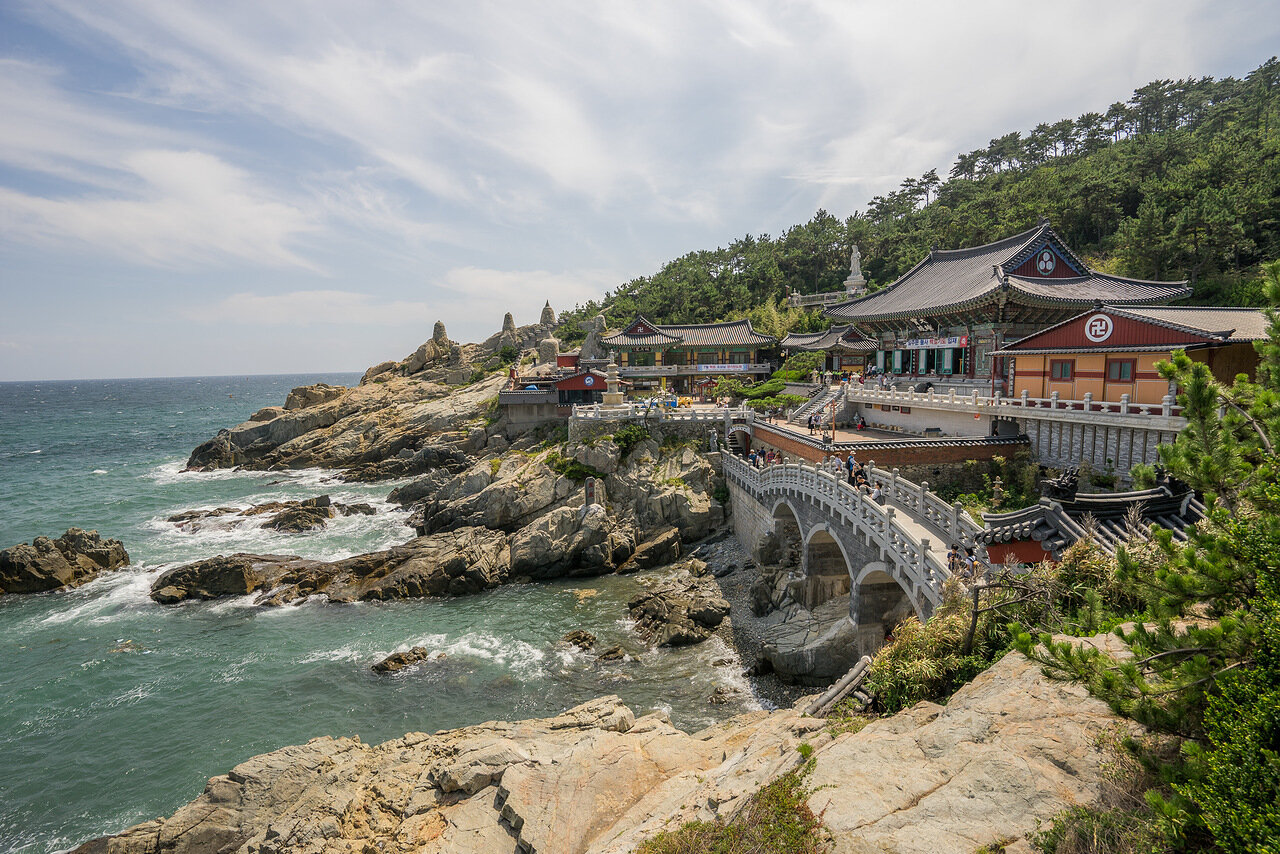 The metropolitan city of Busan is a major Korean port and the country's second largest city.

Millions of tourists come here not only for a beach holiday, delicious seafood and hot springs, but also to visit one of the famous South Korean attractions: the Buddhist monastery Haedong Yonggungsa (Temple of the Dragon of the Sea Buddha). The ancient monastery was built in 626 and is located in the Kidzhan district on the sea coast. This distinguishes it from other temples that are traditionally built in the mountains.

The shrine attracts pilgrims and tourists not only with a unique temple complex, but also with the splendor of the surrounding nature. The temple is located on the top of a hill, and in order to climb to it, you need to climb a staircase with 108 steps.

At the top there is the main pagoda with a healing spring, an altar and gilded sculpture of Buddha. The entire territory of the monastery is filled with many statues of Buddha and stone sanctuaries, figures of mythical animals and dragons.

And the magnificent panorama does not leave any visitor indifferent. 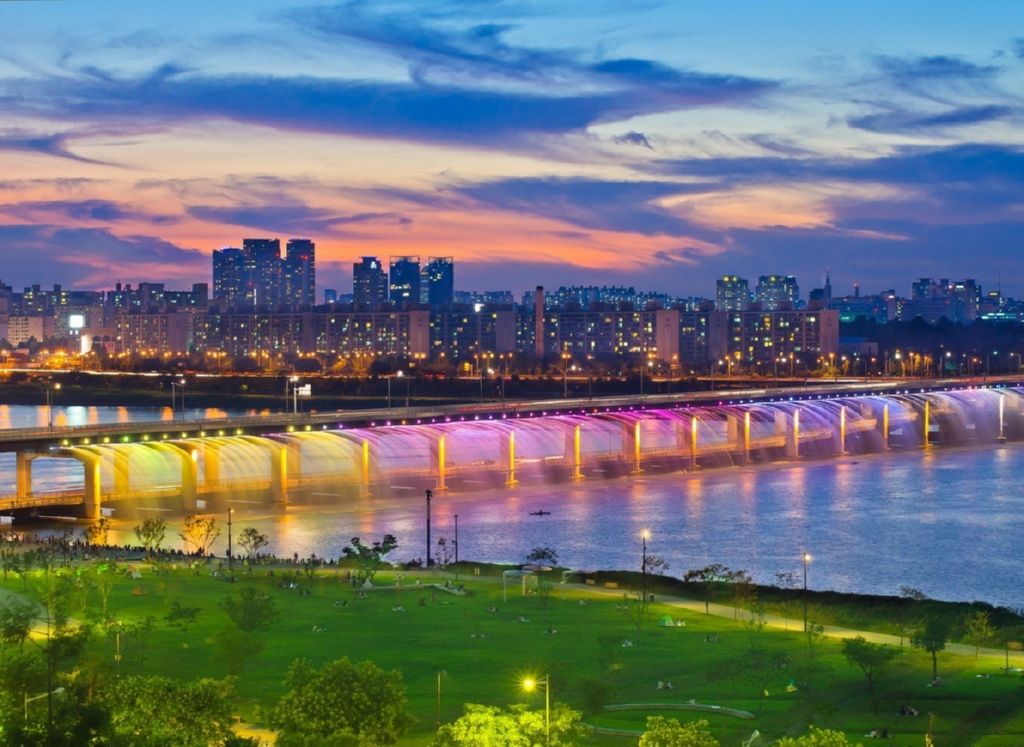 The two-level rainbow fountain bridge (Panpo) in Seoul was opened in 2009, and today it is the longest fountain bridge in the world (length 1140 m). Water is taken from the Hangang River using 38 pumps: the flow rate is 190 tons per minute.

80 water cannons in the upper tier of the fountain throw out water jets, which are illuminated by 10 thousand lamps. The throwing range of water jets is 20 m.

You can visit the capital's landmark at any time of the day, but in the evening the bridge appears in all its glory with a spectacular light show, during which a real rainbow appears.

You can watch the light show:

The unique bridge with a built-in fountain is listed in the Guinness Book of Records. 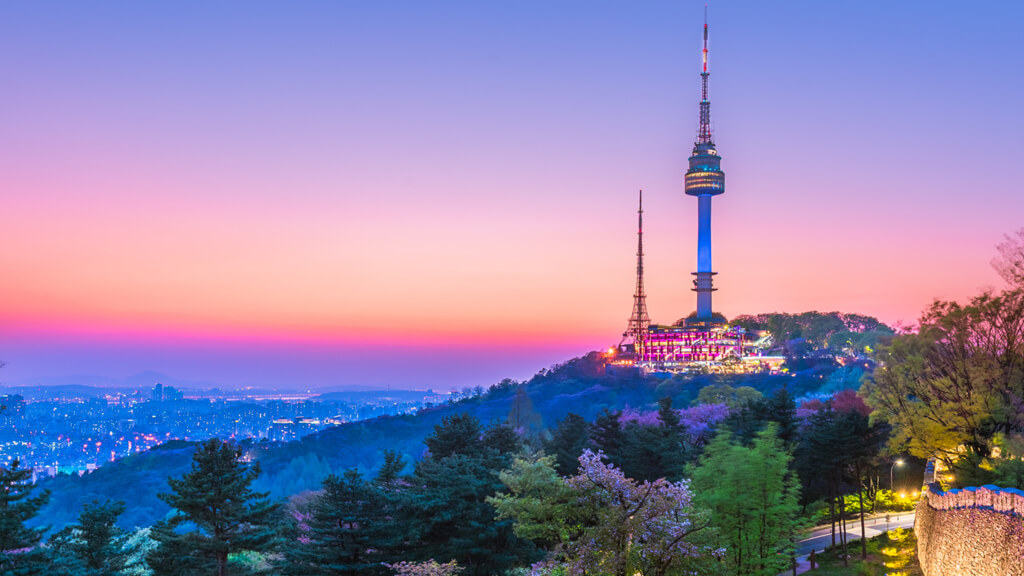 In 1971, the Namsan TV and Observation Tower (YTN Seoul Tower) was built on Mount Namsan in the heart of Seoul, which has become the symbol of the capital of South Korea. The height of the tower itself is 236.7 m, but due to its location at the highest point of the city, it rises 479.7 m above sea level.

The tower is visible from afar at any time of the day. It is divided into three main parts:

In the evening, the architectural structure is illuminated with blue lights.

Seoul Tower is a National Landmark and is ranked among the top 500 attractions in the world. About 9 million tourists from all over the world visit this place in Namsan Park annually.

Namiseom Island emerged in 1944 as a result of the construction of a dam in the capital of Gangwon-do province, Chuncheon. The amazing island quickly became one of the most famous and popular destinations in the Republic of Korea. Namiseom covers an area of ​​about 463 thousand square meters and has the shape of a crescent. The entire territory of the island is a park that harmoniously combines the beauty of nature and modernity.

Tourists who want to take a break from the bustle of the city come here with pleasure.

In 2006, the island declared its cultural independence, formally becoming a state within a state. Namisom has its own anthem, coat of arms, national flag and even its own currency (Nami Tonbo). To get to the island, you need to obtain a visa and go through customs. It has its own laws and regulations.

There are no power lines on the island, since all communications are hidden underground. Animals roam freely in the park. All this creates a special atmosphere of freedom and unity with nature.

But the unusual island can please numerous tourists not only with nature. There is: 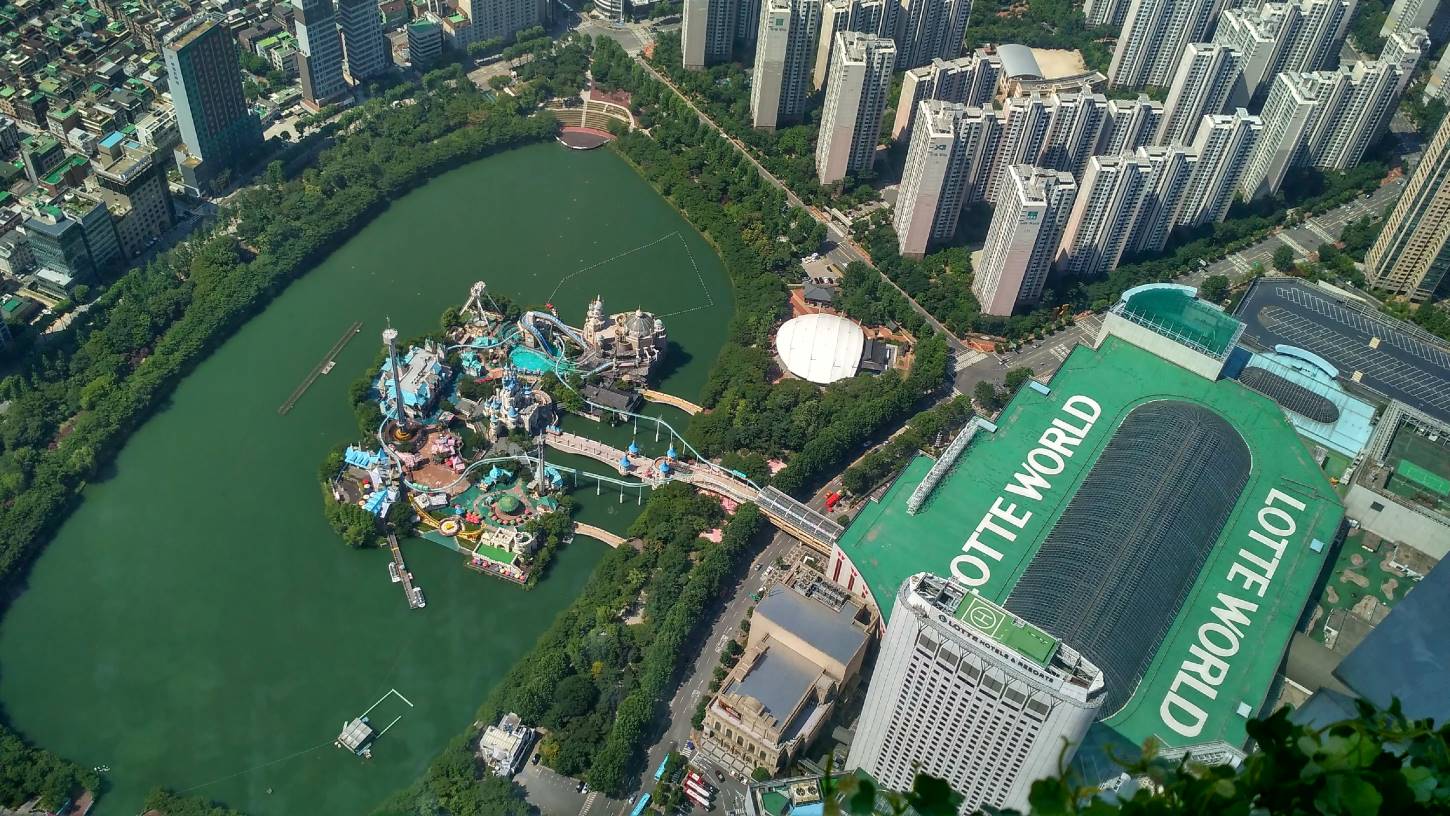 Lotte World is the largest indoor amusement park in the world. Located in Seoul, Sincheon-dong area. The park opened in 1989 and after 6 years it was entered in the Guinness Book of Records. Its total area is 128.2 thousand square meters (area of ​​premises is 581.6 thousand square meters).

The park is divided into two zones:

In addition, the cultural and entertainment park has:

The vast territory of the park allows for a variety of festivals and concerts.

Lotte World Park is open daily, with any weather. Attendance: more than 8 million people a year. 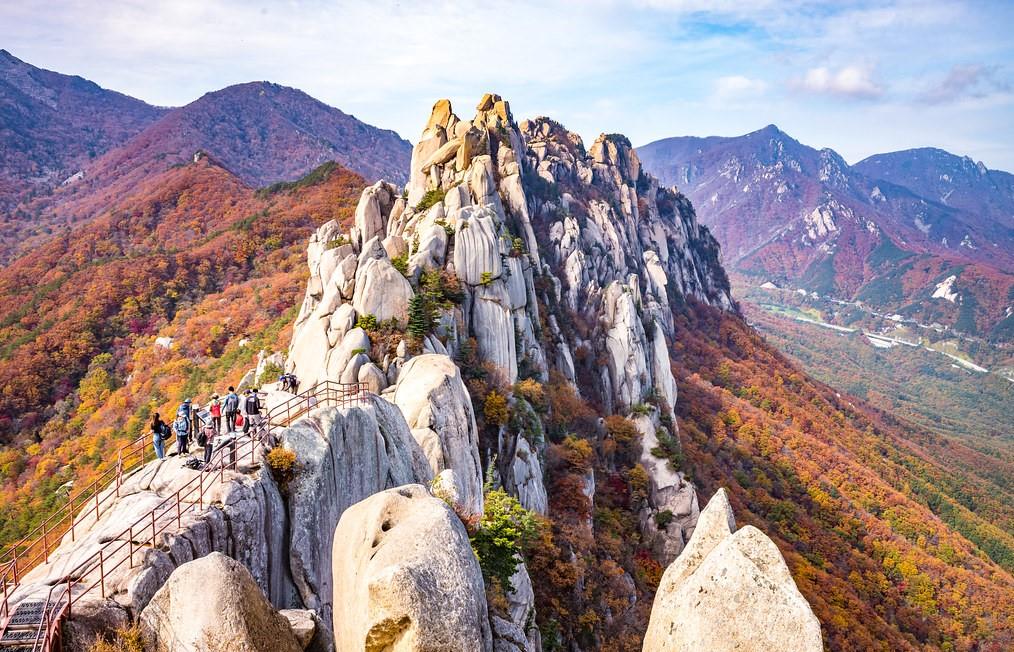 Seoraksan Park is the most famous natural park in Korea. It is located in Gangwon Province, east of Seoul, near the coastal city of Sokcho. In 1970, the park was given national status. Since 1982, together with the adjacent territories, it has been recognized by UNESCO as a biosphere reserve subject to special protection.

The territory of Seoraksan with a total area of ​​about 400 km² is home to a large number of animals (more than 2 thousand species). The flora is represented by over 1400 plant species, including edelweiss and a unique population of dwarf pine.

But the main attraction of the reserve and its heritage, of course, are the granite mountains. The highest and most picturesque mountains of the Taebaeksan range are located in Seoraksan. In total, there are 30 peaks in the park. The highest point, Daecheon Bong Peak, is the third highest in South Korea.

One of the most popular routes in the national park is the ascent to Ulsanbawi Peak. On the way to the top of this beautiful mountain, tourists have to climb a huge number of stairs. Two Buddhist temples have been built on the slopes of the mountain.

The park is territorially divided into three parts (Nesorak, Namsorak, Esorak). There is no transport connection between them due to the lack of roads. Outer Seorak is the most visited and the most comfortable part (cafes, hotels, well-developed transport links).

The cable car takes you to Mount GwongEumseong, where a 13th century fortress has been preserved.

The best time to visit the national park is mid-autumn, when the air temperature is comfortable and the rampage of autumn colors is pleasing to the eye. Magnificent views and amazing nature attract millions of tourists to the reserve every year.

Korean Air and Asiana Airlines are South Korea's main national airlines that serve both international and domestic flights. Officially, the country has:

Railways are one of the main and most convenient ways to travel around South Korea. The only carrier in the country is the National Railways of Korea (Hanguk Chholdo).

The railway network consists of 8 lines, the main of which connects the two largest cities of the republic: the capital Seoul and the city of Busan. There are no railways on Jeju Island.

Types of railway transport in Korea: 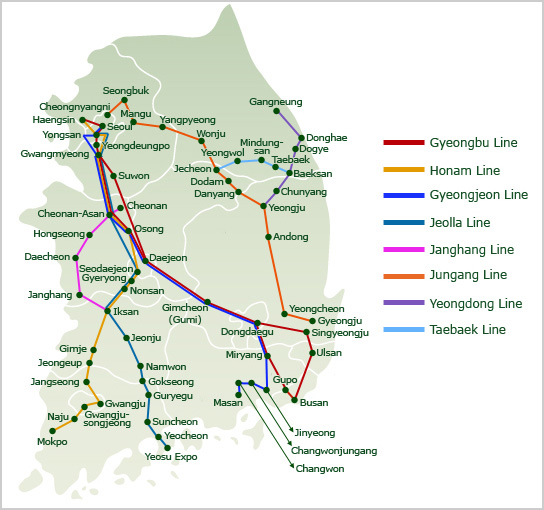 The length of motorways (toll expressways) is 4138 km. Most of them are built, serviced and operated by the Korea Expressway Corporation (KEC).

National roads stretch across the country for 13.7 thousand km. 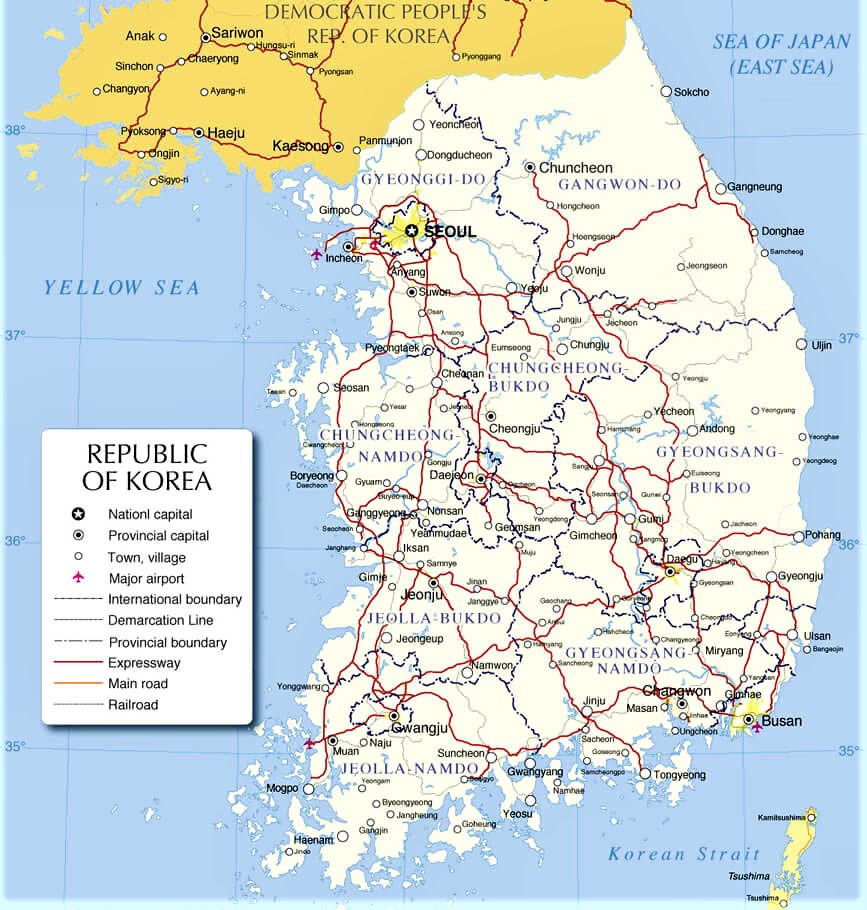 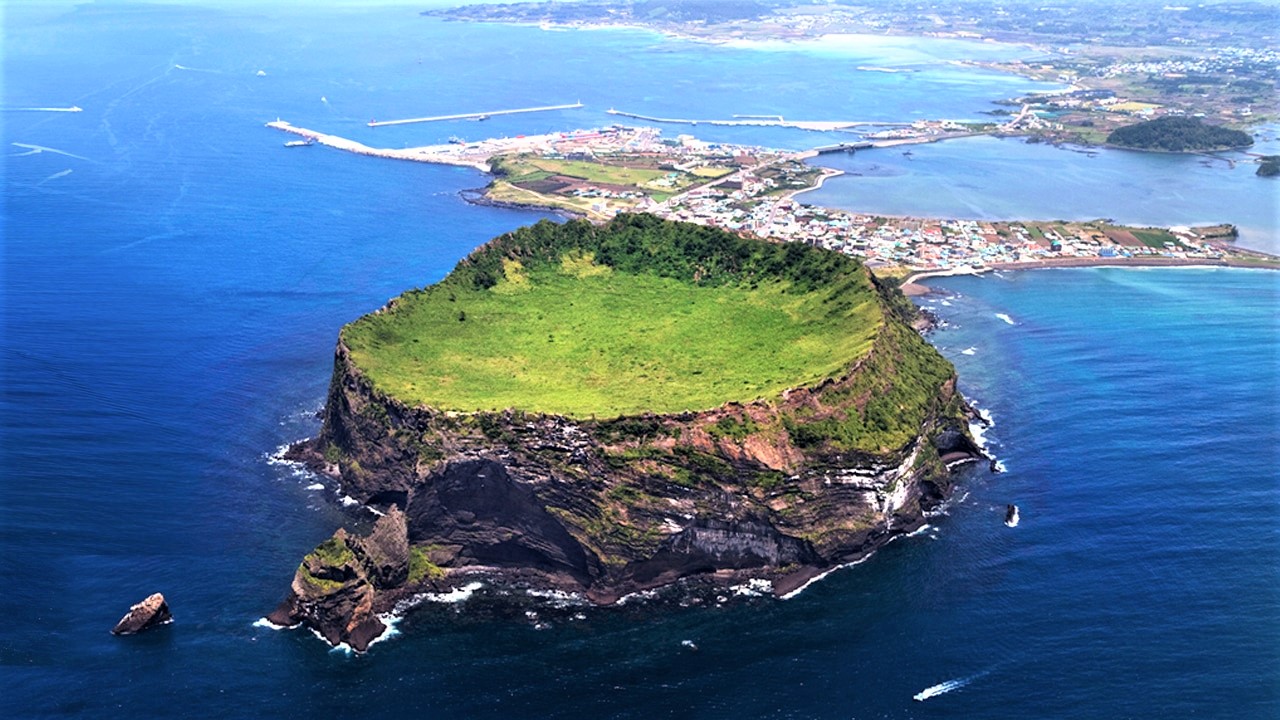 Jeju is the largest island in South Korea. It is located in the Korea Strait at a distance of 90 km from the mainland of the country and covers an area of ​​more than 1.8 thousand km ². The territory of Jeju is the smallest province of the Republic of Korea (province with special autonomy of Jeju), in which about 532 thousand people live.

It is an island of volcanic origin, mainly composed of solidified lava (basalt). The highest point in South Korea is located on Jeju: the Hallasan volcano, formed 780 thousand years ago (height 1947 m). According to the results of geological studies, it has been established that the last eruption of the volcano occurred 25 thousand years ago, and therefore the volcano is considered extinct today. The national park of the same name is located near Mount Hallasan.

Manjanggul Cave (13,422 m long) is the longest lava cave in the world. It is located in the eastern part of the island. Only 1 km of this unique natural tunnel is open to tourists.

There is practically no winter on the island, which makes the island the best resort in the country. In addition, the island is famous for the abundance of tangerines, special hiking trails (Olle Trails), which are laid throughout the island, and gorgeous beaches with black volcanic sand. On one of the beaches of the national park, small shows with the participation of divers are held: the main cultural attraction of Jeju.

Jeju Island, thanks to its unique tropical landscape and mild maritime climate, has become one of the most popular destinations in South Korea for tourists and South Koreans. Many newlyweds choose Jeju for an unforgettable honeymoon.

Since 2007, the unique nature of the island has been protected by UNESCO as a World Heritage Site called Jeju Volcanic Island and its lava tubes.