Where is Spain located? Basic information about the country

Spain (España) is the official name of the Kingdom of Spain (Reino de España). Country located in the southwest of the European continent (and having territories in Africa), bordering on land with five countries (France, Andorra, Morocco, Portugal, Gibraltar). The population of the state is 46.7 million people, with a density of 92 people / km². In 2019, the population showed a negative growth of 2.16 percent (compared to 2018 data). It is in fourth place (in size) among European countries, occupying an area of ​​505 thousand km². It is located in the UTC + 2 time zone, in winter time the time zone changes to UTC + 1.

Spain's economy is in 12th place in the world, while showing a serious unemployment rate (about 16%) and public debt ($ 2.1 trillion).

GDP (nominal) is 1.4 billion dollars, and 30.69 thousand dollars per capita.
International tourism is seriously developed in Spain, the country is one of the largest tourist centers in the world. In 2017, 81 million people visited the country, of which about 95 percent are citizens of the European Union. The main tourism industry in Spain is beach vacations. In addition, the following options are available:

Spain is one of the warmest countries in southern Europe, the average annual temperature of the Mediterranean coast is + 20 ° С. At the same time, the country has deep differences in climatic conditions on its territory: many climatic zones. The prevailing Mediterranean climate is subdivided into maritime, continental and arid. Temperatures and conditions depend on the type of climate, which vary from warm (above 40 degrees in summer and not below 10 degrees in winter) to moderate and relatively cold (not more than 22 degrees in summer and slightly negative temperatures in winter).

The regional division of the country is as follows:

In turn, the autonomous regions are divided into 50 provinces; in which there is a further division into mosques (324 units) and, after that, into municipalities (more than 8000).

Territories located in North Africa with a population of about 170 thousand people. 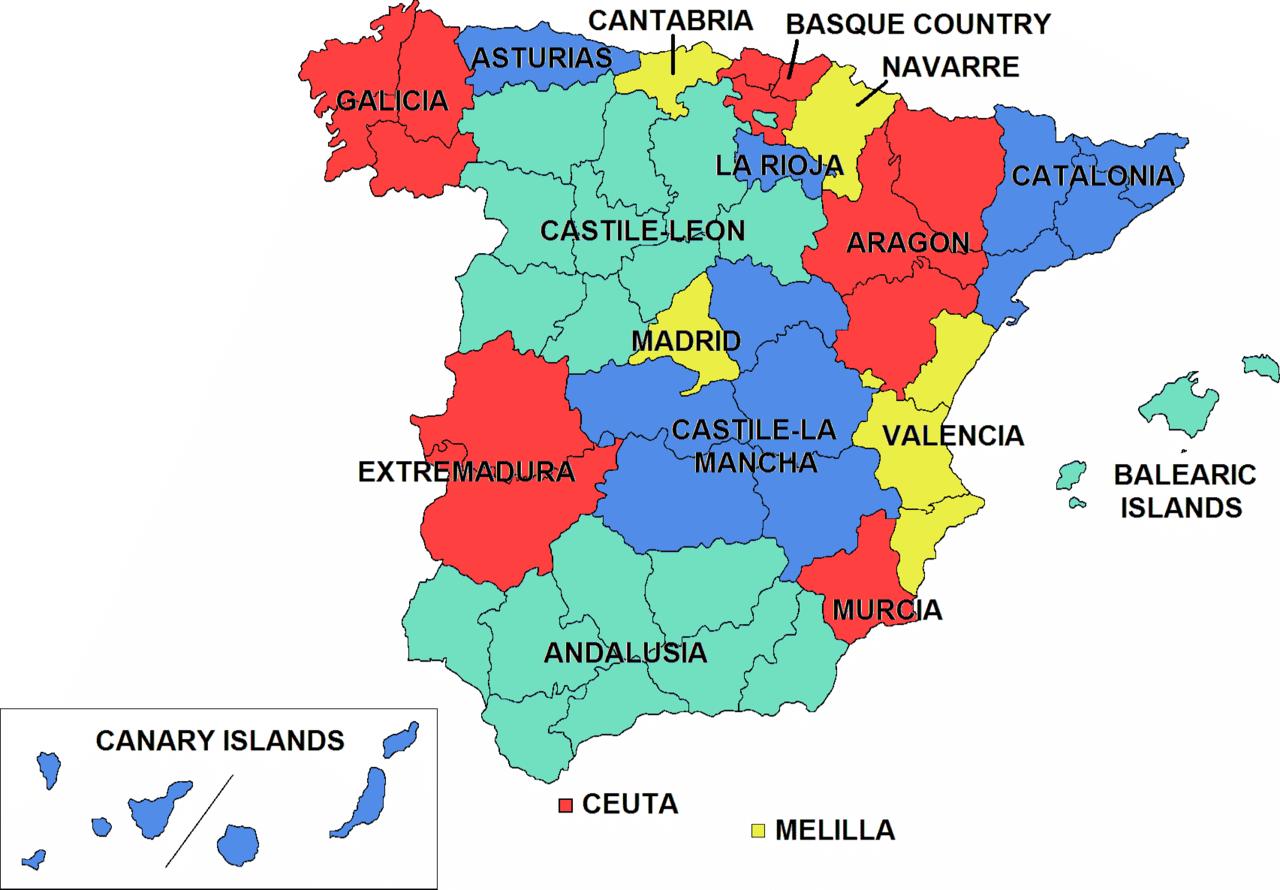 The neo-Gothic church located in the city of Barcelona. It is one of the most famous landmarks of this city. Also, it is the most famous long-term construction in the world. The construction of this attraction started in 1882 and continues to this day. The reason for this situation is that construction is carried out exclusively on voluntary donations. In 2010, the building received the title of Basilica minor from Pope Benedict XVI. The temple is visited annually by over 2 million tourists. 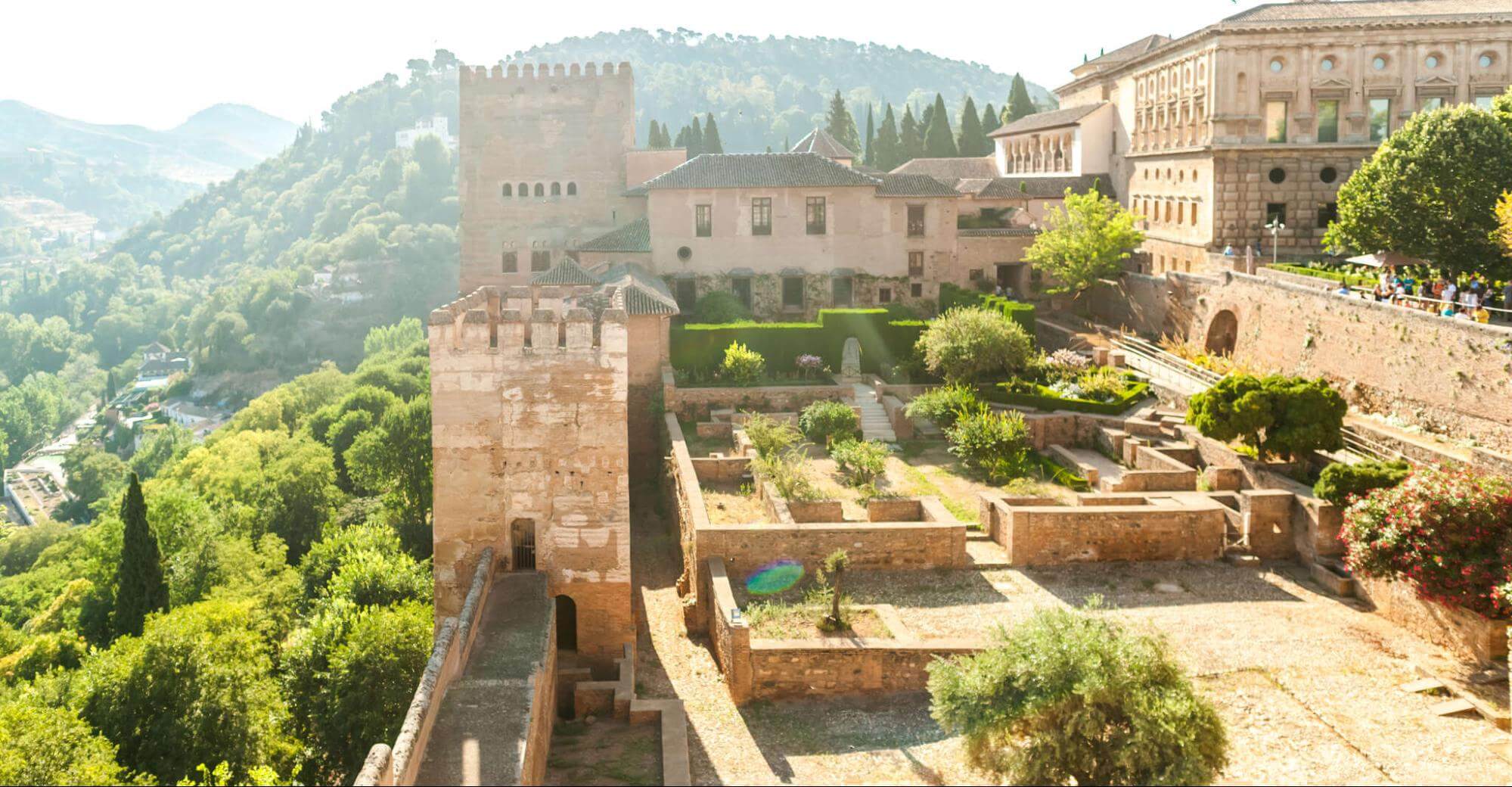 An architectural and park ensemble. It is a museum of Islamic architecture in the city of Granada, the pinnacle of the achievements of Moorish art in Europe. In the Middle Ages, when the territory of what is now Spain was conquered by Muslims, this place served as the seat of the Muslim dynasty of the Nasrid rulers (Nasrid dynasty, Spanish: Nazarí). In addition to parks, swimming pools, cascades and fountains, the complex consists of various buildings for religious and domestic purposes, and all this diversity is enclosed in the fortress walls and towers. 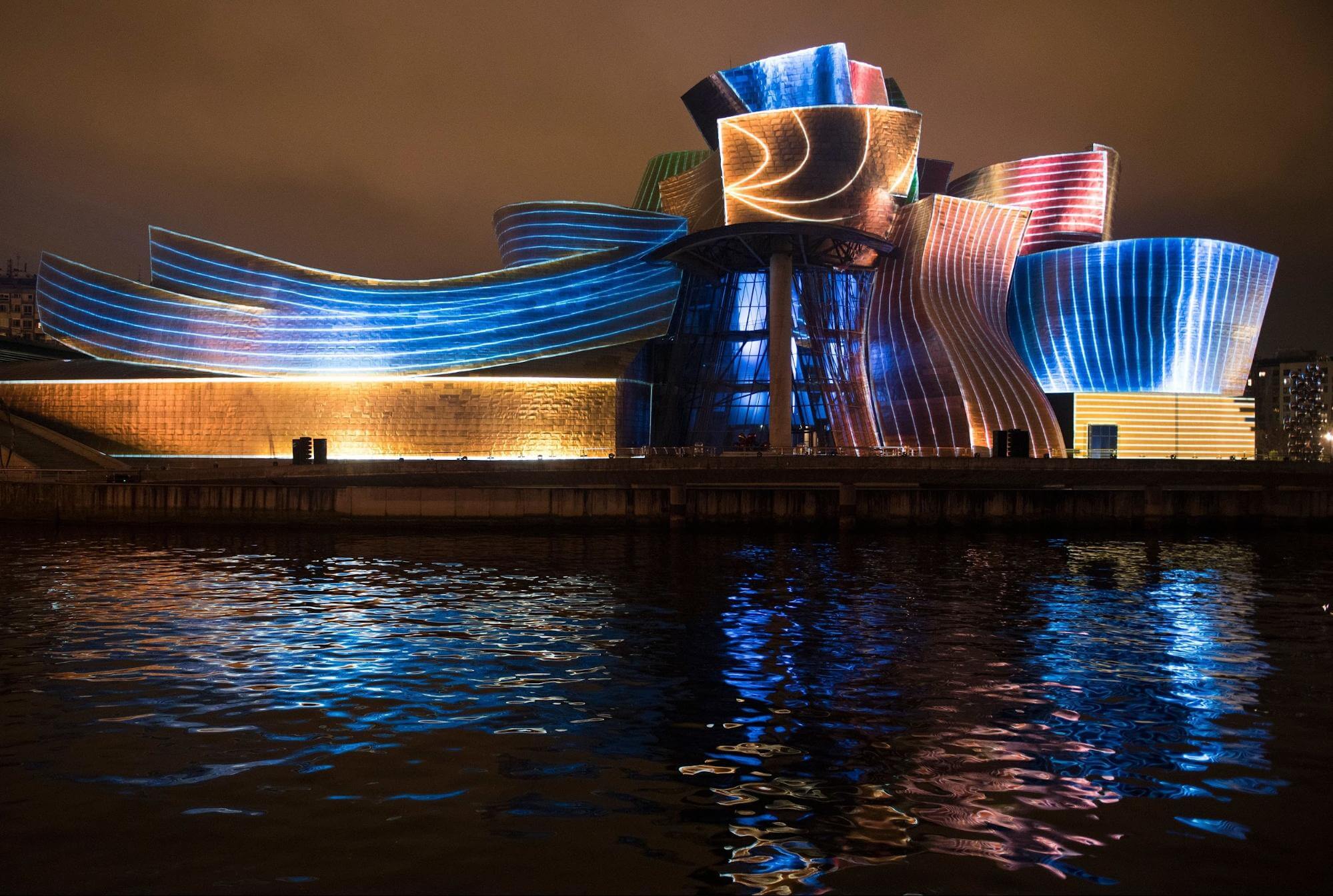 One of the largest museums in Spain (11 thousand square meters of exhibition space) is located on the banks of the Nervion River. Opened in 1997 by King Juan Carlos I of Spain, it contains over 200 pieces of contemporary art. The museum building itself is one of its main exhibits and is called a masterpiece of the 20th century. 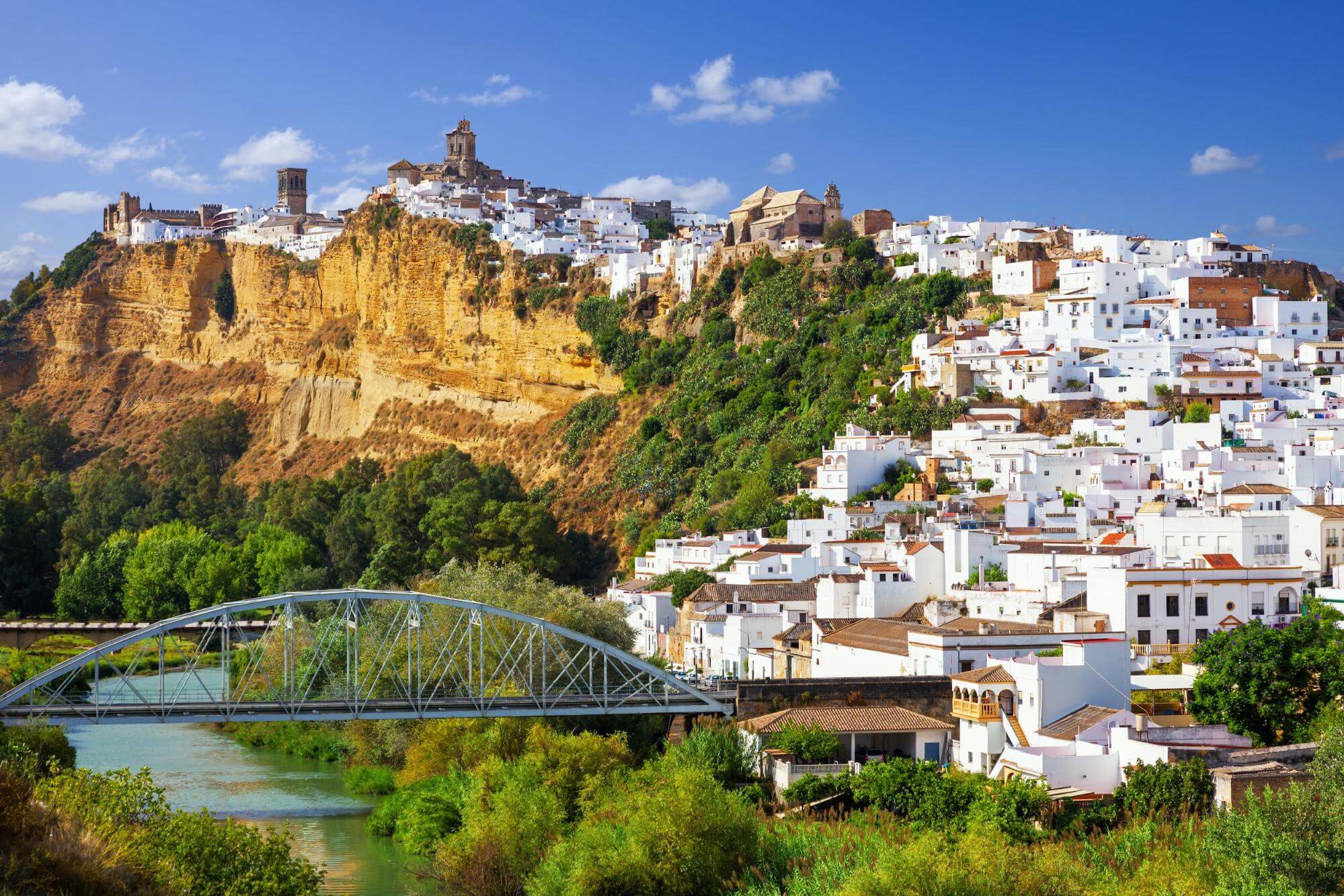 Towns and villages located in the autonomous region of Andalusia have recognizable typical architecture, tiled red or brown roofs and bright white walls, presumably derived from limestone. These settlements are characterized by narrow streets, steep ascents and descents, picturesque central areas with a square and a temple. There are routes to such cities and villages, for example Ronda's White Towns route and Arcos de la Frontera's White Towns route. Tourists on these routes offer hiking, cycling, horse riding, rock climbing, local cuisine and magnificent nature. 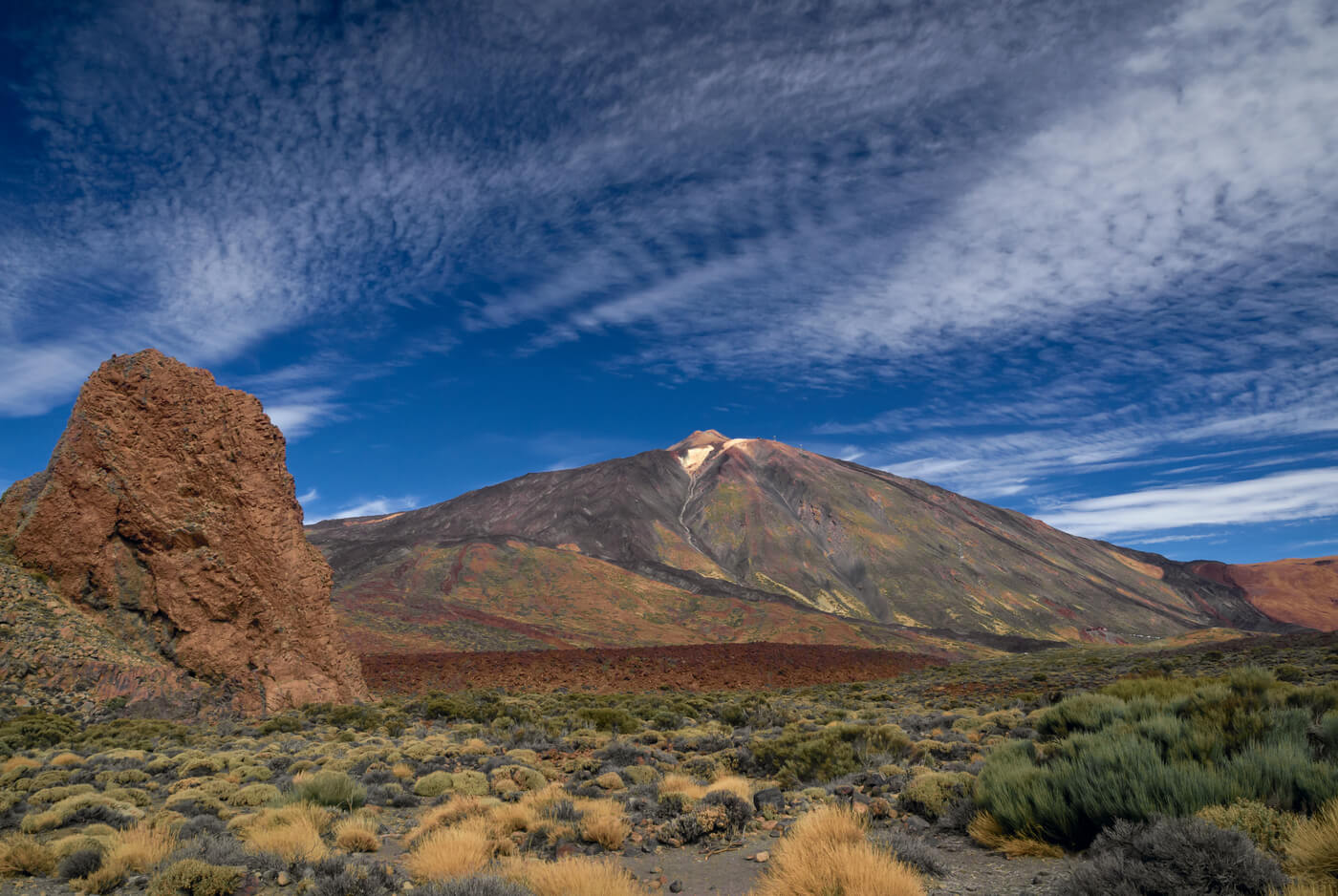 A volcano located in the Canary Islands. It is the highest point in Spain; it is active, and the last eruption was recorded in 1909. Mount Teide has been awarded the title of Decade Volcano due to the destructive actions it can bring. It is part of the Teide National Park complex. The volcano is included in the UNESCO World Heritage List, and is the most visited natural wonder in Spain (about 4 million people a year). 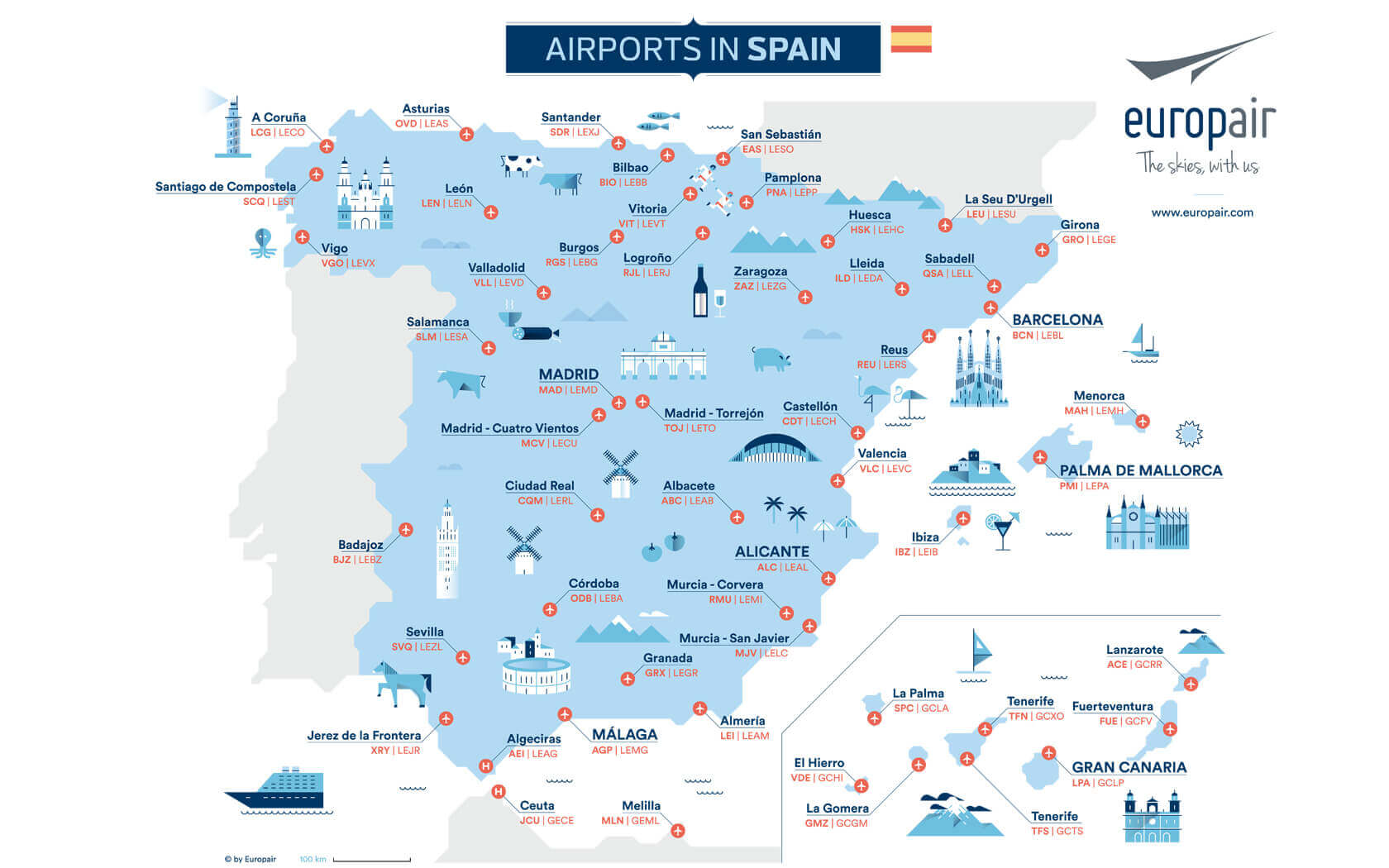 In most cases, air travel is the most convenient and fastest way to get to Spain. Choosing this method of transportation, you need to understand which air harbor will be convenient to use for flights.

To do this, we present a list of the ten largest international airports in the country:

Located in the capital of the country, Madrid. It is the largest international airport in Spain and the second in Europe. Passenger traffic is over 61 million passengers.
Location: Av de la Hispanidad, s / n, 28042 Madrid, Spain

Located 12 kilometers from Barcelona. The administrative center of the autonomous region of Catalonia. In terms of passenger traffic, it is in second place in Spain and serves more than 52 million passengers a year.

Traffic of this airport is 19.8 million people a year (fourth in Spain). The main airport serving the world renowned tourist beach resort of the Costa del Sol.

Located 9 km from the city of Alicante, carries about 15 million passengers a year, which puts it in fifth place in Spain.
Location: 03195 L'Altet, Alicante, Spain

Spain's road networks are integrated into European road networks; and the roads of the European Union, in addition to their own Spanish number, have a duplicate European standardized number. 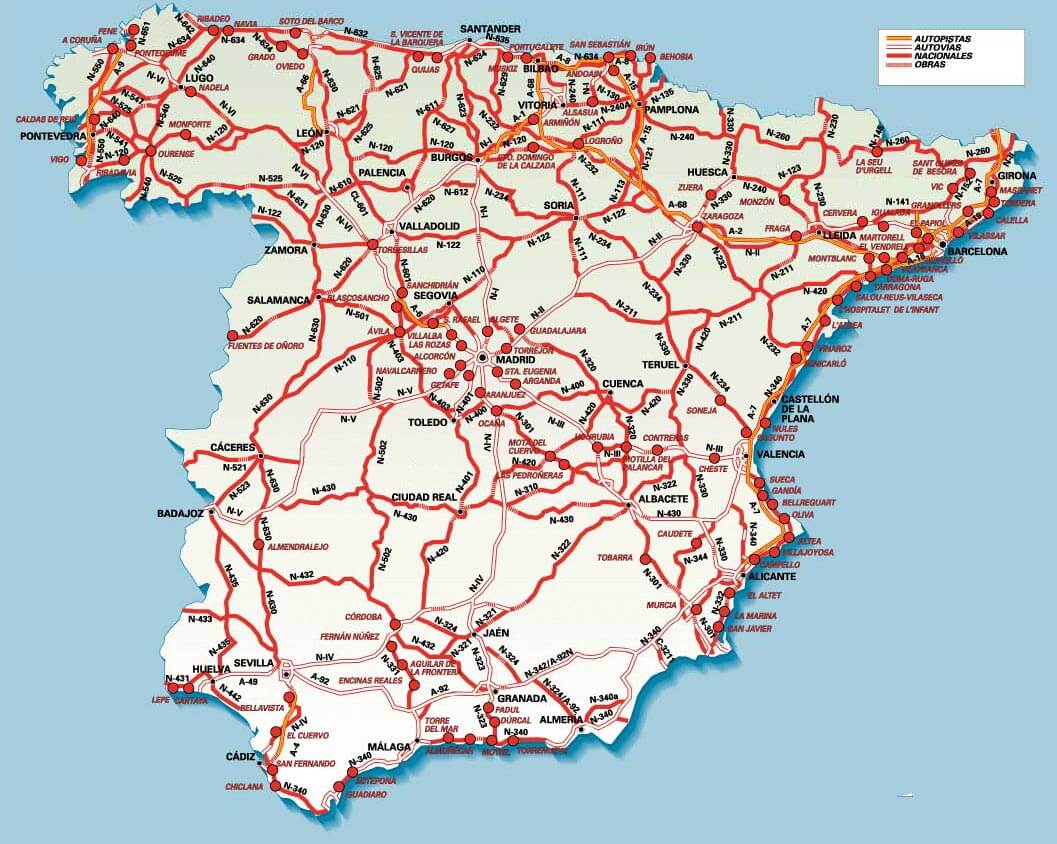 If you are planning to take an adventure road trip in northern Spain, we advise you to pay attention to the following map, which takes into account the most interesting places to visit: 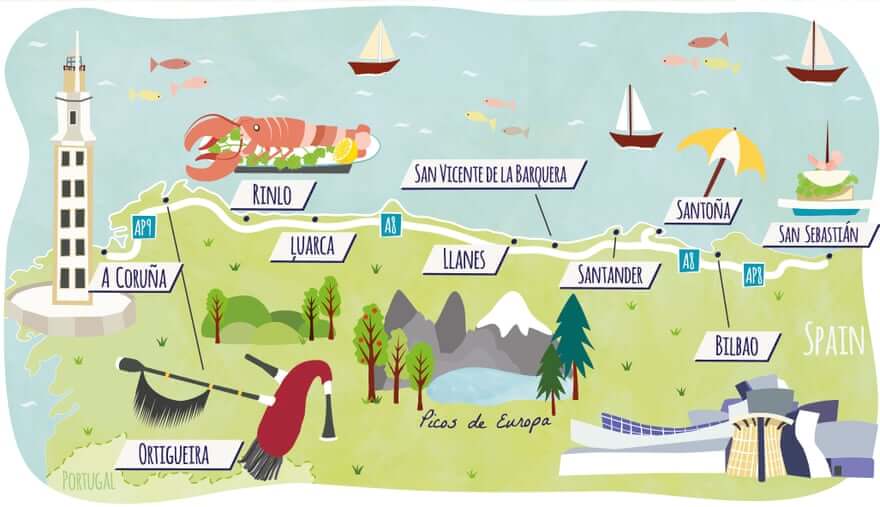 There are many mountain ranges in Spain. Almost half of the country is mountainous territory, as a result of which ski tourism and recreation is very common in this country. 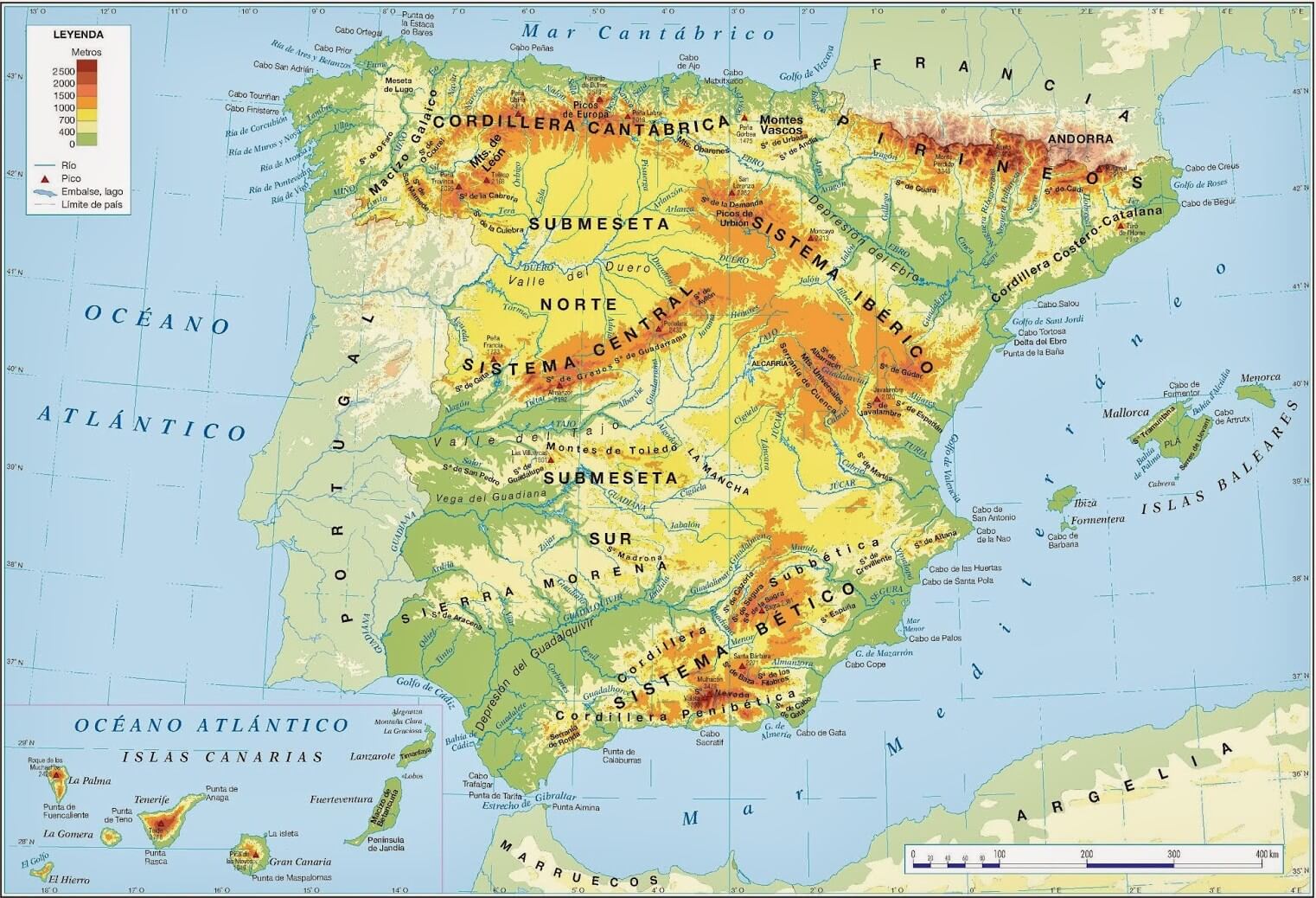