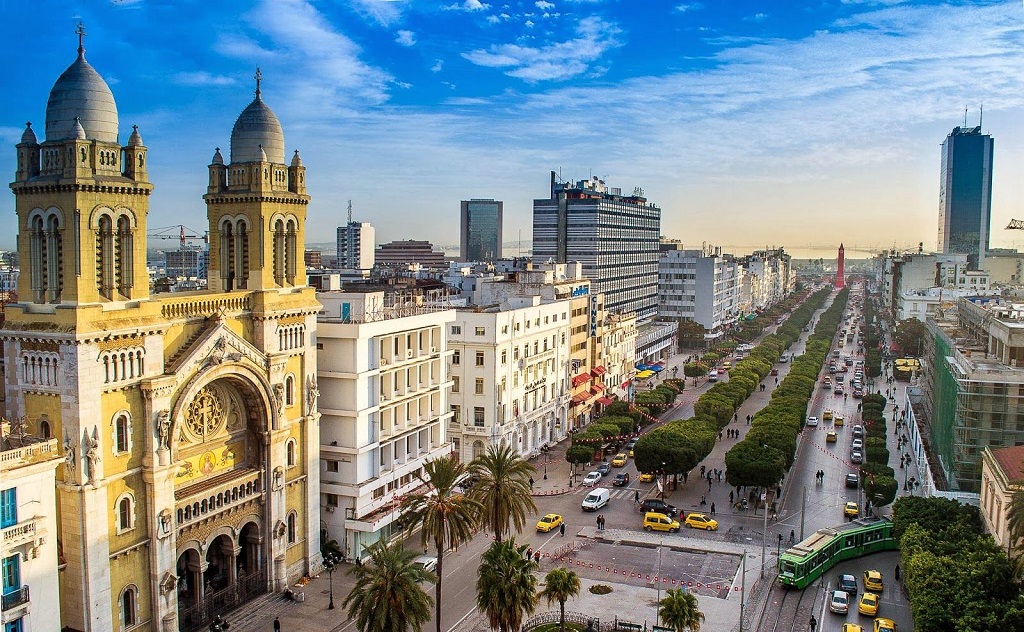 The Tunisian Republic is located in the northernmost part of the African continent. More than 11.7 million people live on the territory of 163.6 km². The capital and the largest city is Tunisia. Since ancient times, the cultures of the East and the West have harmoniously intertwined in the country: traditions and progress.

This smallest country in northern Africa is interesting for its diverse landscapes: almost ⅓ is occupied by peripheral mountain ranges (spurs) of the Atlas mountain system, and the rest is covered with savannas. The highest point is Mount Shambi (1544 m). From the north and east, the territory of the state is washed by the Mediterranean Sea, the coastline of which is cut by picturesque bays with magnificent beaches.

To protect the unique nature, 15 national reserves have been created in the state.

Due to its mild climate, Tunisia is often called the country of eternal summer: a tropical desert climate prevails inside the country and a subtropical Mediterranean climate on the coast and in the northern regions.

The best time to visit the country is September-November and March-June.

The Islamic State (98% of the population preaches Islam) has a presidential form of government.

Tunisia's economy is actively developing (GDP is about $ 38.797 billion, HDI is quite high - 0.739). The foundation of the economy of an agro-industrial country is agriculture (the country ranks 4th in the world for the export of olives and olive oil). In addition, international tourism and the light industry are well developed.

Tunisia has the lowest crime rate and one of the highest levels of education among the Arab countries.

The rich history, distinctive culture and unique nature of the country annually attract about 8-9 million people to the Republic of Tunisia.

Tunisia is divided into 24 provinces (vilayets), headed by the wali elected by the president: 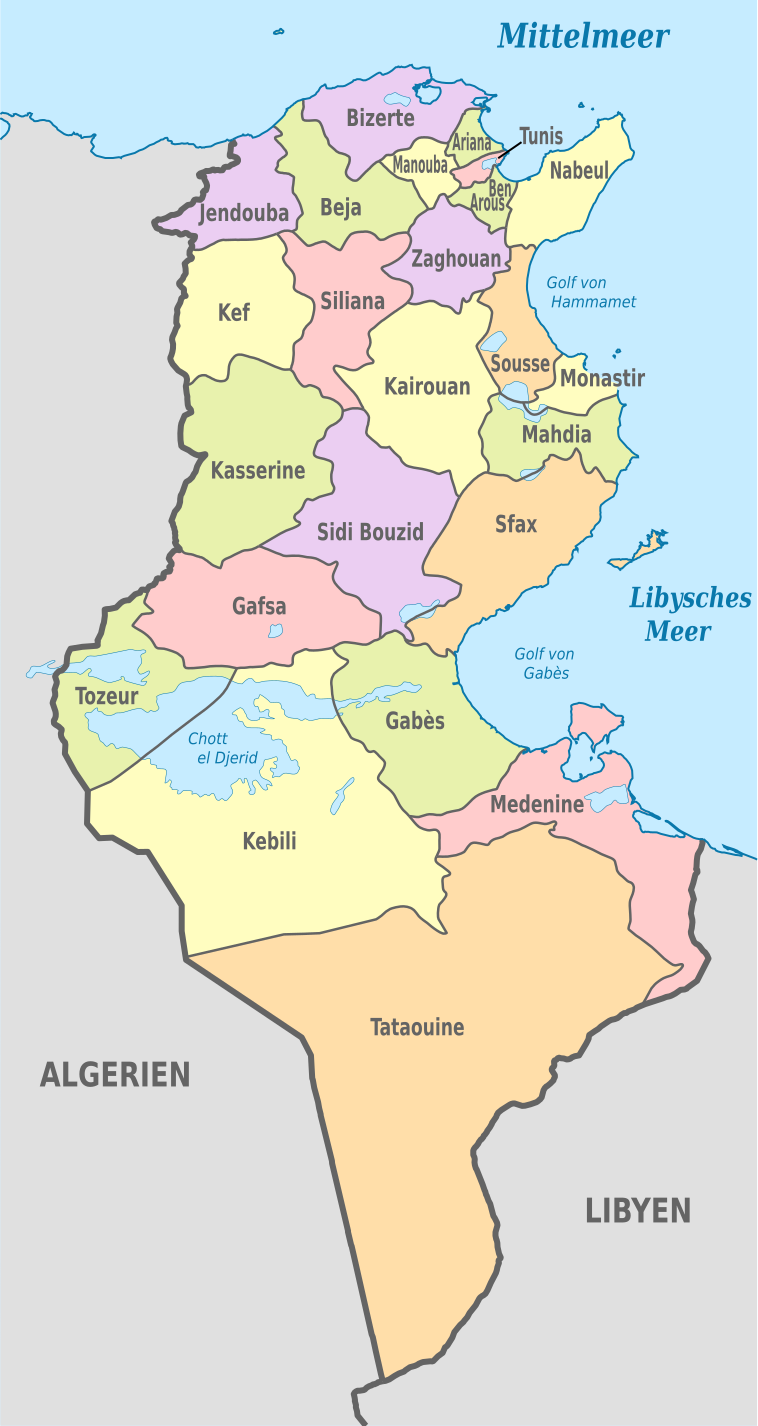 The most interesting sights of Tunisia

Tunisia is a country with an ancient and rich history, unique nature and unforgettable flavor. The country has a huge number of monuments of architecture and antiquity. 7 of which are included in the UNESCO heritage list. This country preserves its culture and historical traditions that stand today on the path of progressive development. 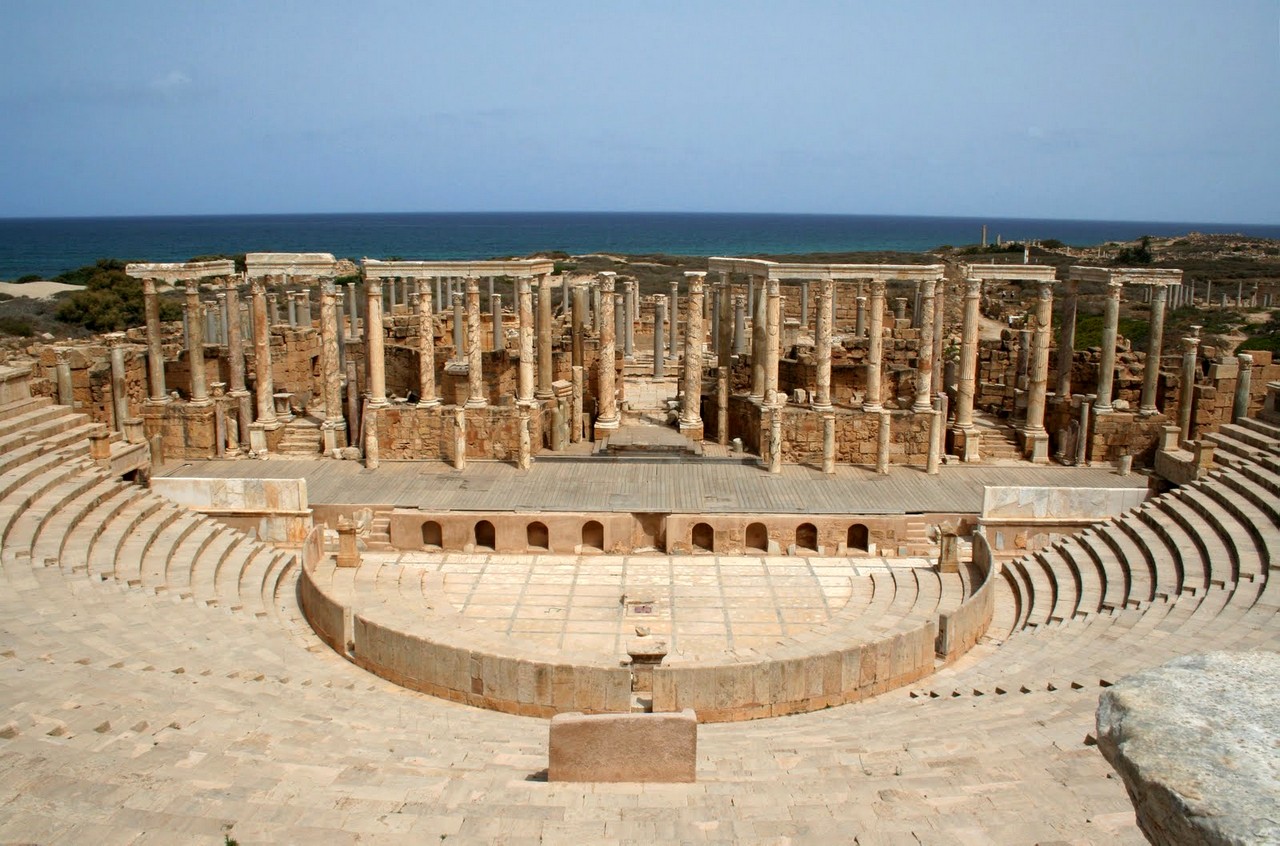 15 km from the capital of Tunisia, on the shores of Lake Bakhira is the ancient city of Carthage. Once the richest city and an important trade center of the ancient Mediterranean. Today these are the remnants of its former greatness, preserved in ruins about 6 km long:

The famous suburb of the capital Tunisia has become a place where millions of tourists from all over the world flock. In 1985, the ancient city of Carthage was included in the UNESCO World Heritage List. 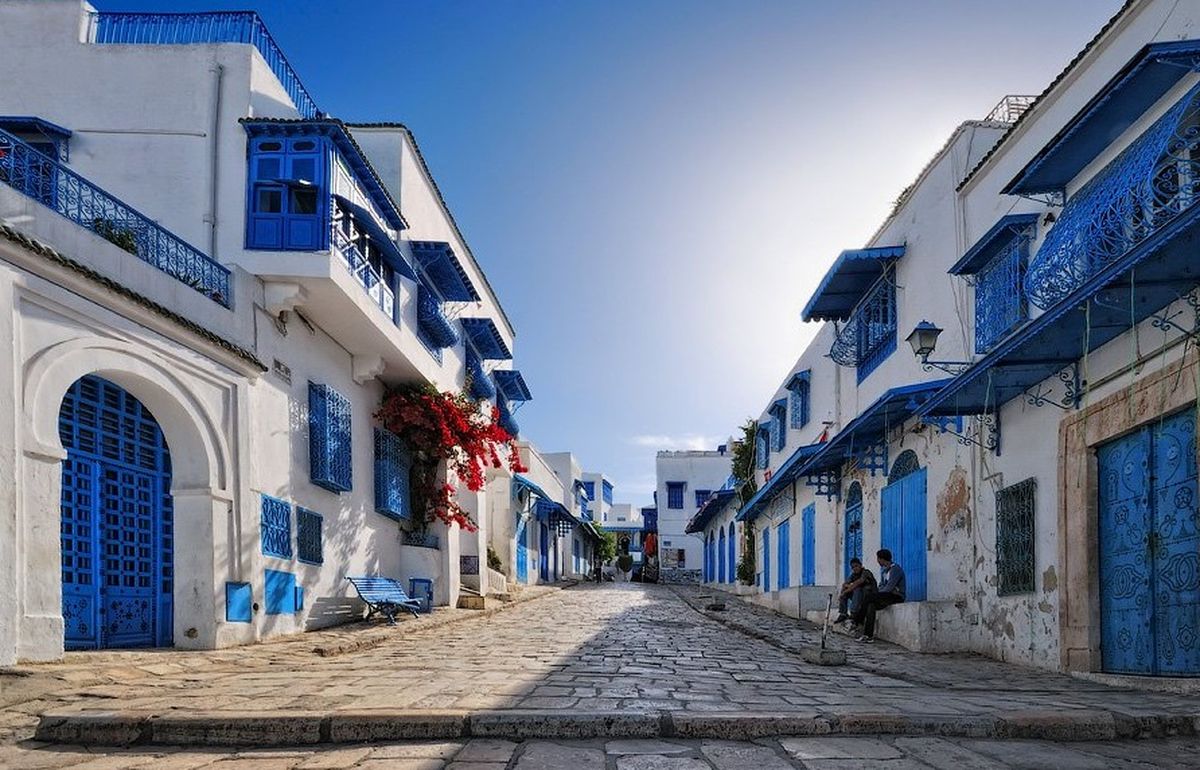 Sidi Bou Said is a large tourist center in the north of Tunisia. Located on the hills on the Mediterranean coast near the Gulf of Tunis. The Andalusian style in blue and white has become the hallmark of the city, which at different times has become a place of residence for many creative people.

This small fairytale town has only one central street: Rue Hedi Zarrouk that ends with an observation deck offering magnificent panoramic views. Rue Habib Thameur is famous for souvenir shops, cafes and restaurants.

There is the ethnographic Museum of Tunisian life Dar El Annabi (Palace of Arabian Nights) in the center of the town, the exposition of which immerses in the atmosphere of the traditional home of Tunisians. Another noteworthy museum is the Museum of Arab and Mediterranean Music with rich interior decoration, a unique collection of Mediterranean and Arab musical instruments and an exhibition of ancient oriental items and jewelry.

The city of Sidi Bou Said with its unique Arabic style, winding streets and paving stones is deservedly considered the most beautiful city in Tunisia. It is under the protection of UNESCO. 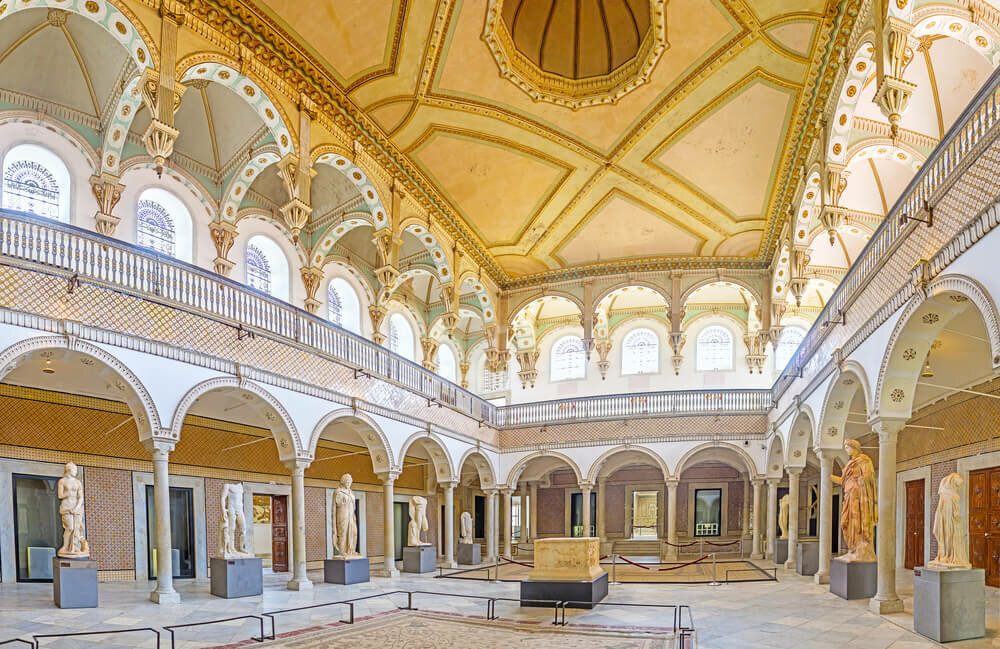 Bardo National Museum is one of the oldest and largest archaeological museums in Africa. Located in the suburbs of the capital's museum. It was opened in 1888 in the building of the Hafsid palace, built in the 13th century.

All artifacts are collected in an exposition of 6 sections that located on 3 floors of the Grand Palace (34 halls), in the Small Palace and an additional modern annex:

The most interesting and rare artifacts found during archaeological excavations throughout Tunisia are sent to this central museum of antiquity. The pride of the museum is the richest collection of Roman mosaics in the world, which includes 332 exhibits. The unique museum annually attracts millions of tourists, ranking third in the ranking of the most visited tourist sites in Tunisia. 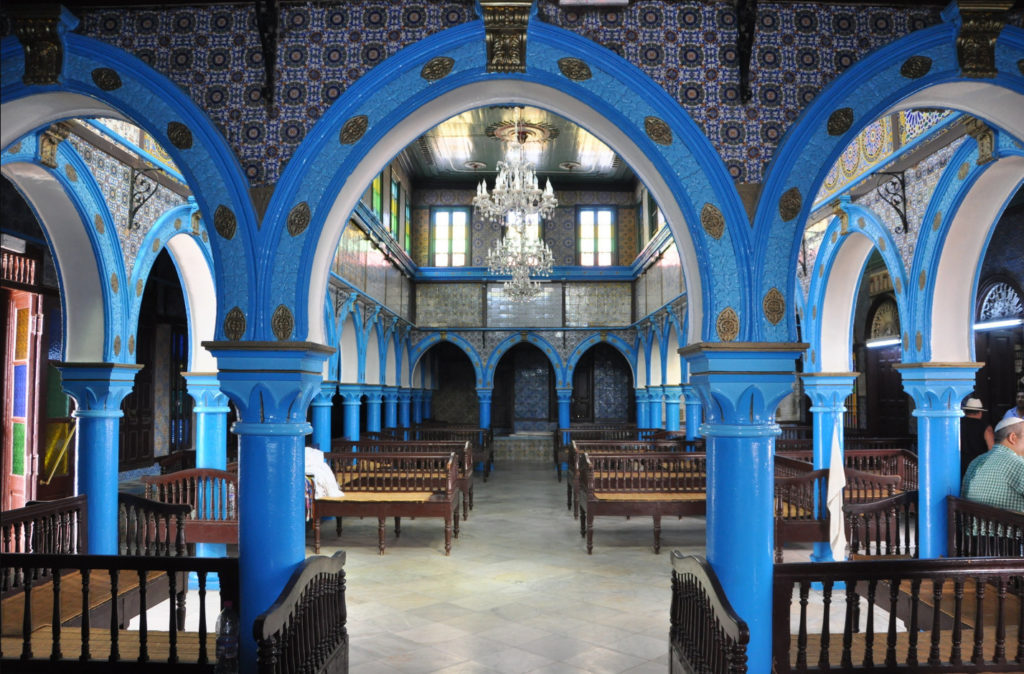 The El Grib synagogue is considered to be the oldest shrine (6th century BC), where Jews from all over the world come to worship. Its age is estimated at 2 thousand years. The famous cultural monument is located on the island of Djerba in the village of Riyadh which was once a small Jewish village.

An unremarkable one-story white building with blue shutters and doors, completely unlike a synagogue, hides rich decoration inside. Everything is done with refined taste: beautiful colorful arches and columns, large chandeliers, decorated with tile walls, colored stained-glass windows. The combination of white-blue and red-green colors in the interior emphasizes the uniqueness and harmony of the fusion of two traditions: Arab and Jewish.

In the second hall of the synagogue there is a wailing wall in which you can leave a note with a request or wishes. Hundreds of pilgrims have left Silver plaques on the wall.

The main attraction and pride of the synagogue is one of the world's oldest Torah Scrolls. And bookcases contain many sacred books and scriptures.

There is a hostel for numerous pilgrims on the territory of El Ghriba. 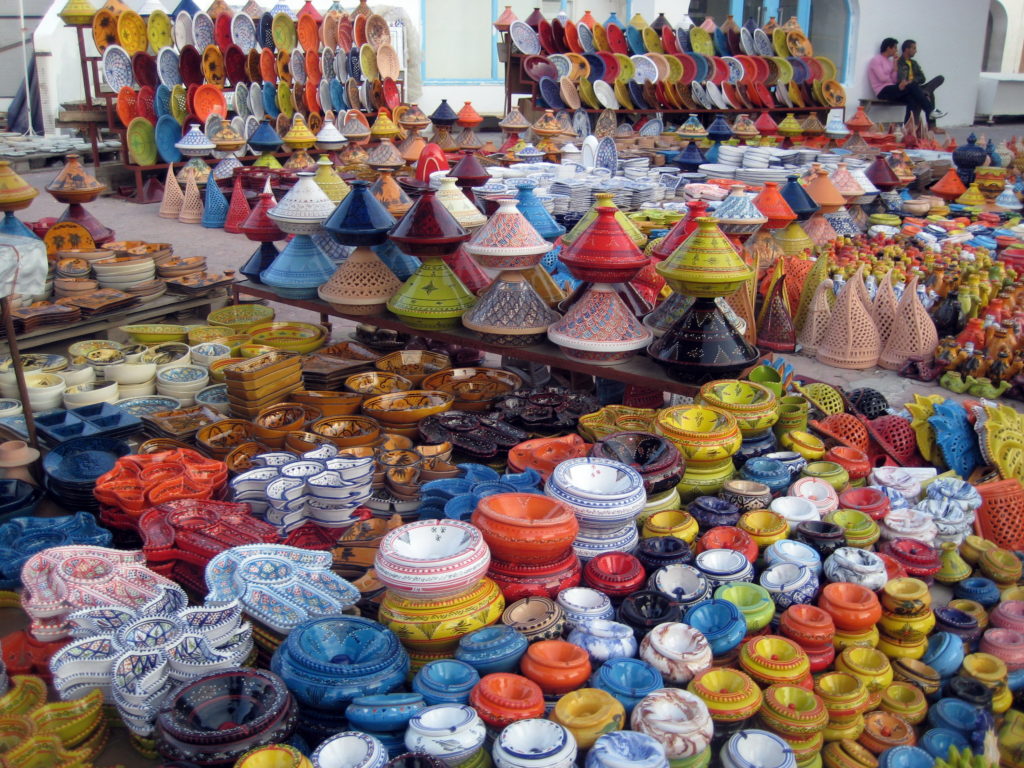 Suq el-Juma is the oldest and largest market in Tunisia. Located in the city of Nabeul. The huge territory of the market is divided into quarters (streets) where certain goods are sold (fabrics, perfumes, paintings, spices, sweets, etc.). But the greatest celebrity was acquired by ceramics which have been produced in Nabele for a long time (in the 16th century, a deposit of high-quality clay was found at Cape Bon). The Suq el Juma market offers a wide variety of styles of pottery. 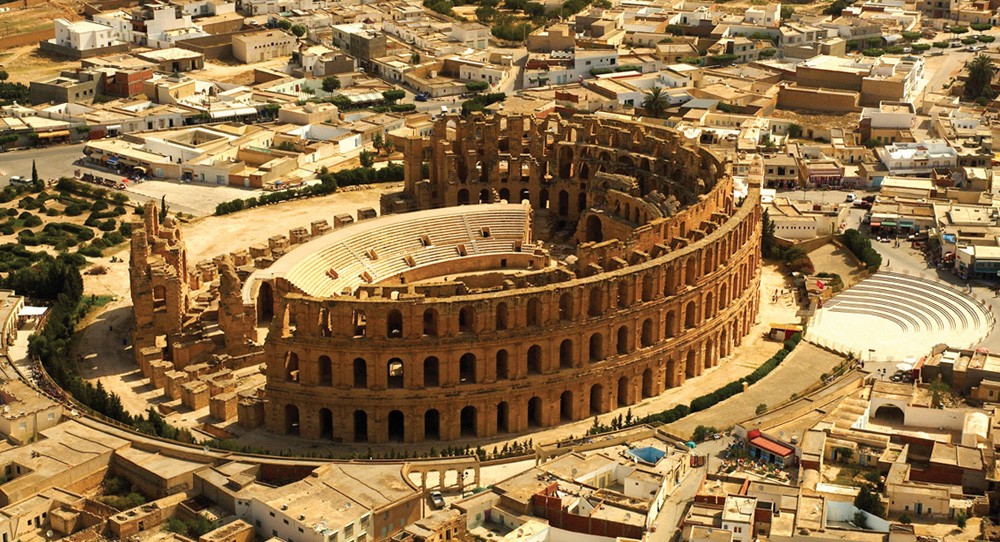 Built between 232-238 AD, the amphitheater at El Jem (African Colosseum) is the third largest in the world and the best preserved. The antique amphitheater is a rounded arena, around which there are arched galleries in the Corinthian style (68 arches) and rows for spectators in the stands.

Once this grandiose three-storey building seemed to be a miracle of architectural thought. The dimensions of the amphitheater in El Jem are:

During its existence, the amphitheater played the role of not only a place for shows and entertainment but also was a fortress.

In 1979 it was included in the UNESCO World Heritage List. 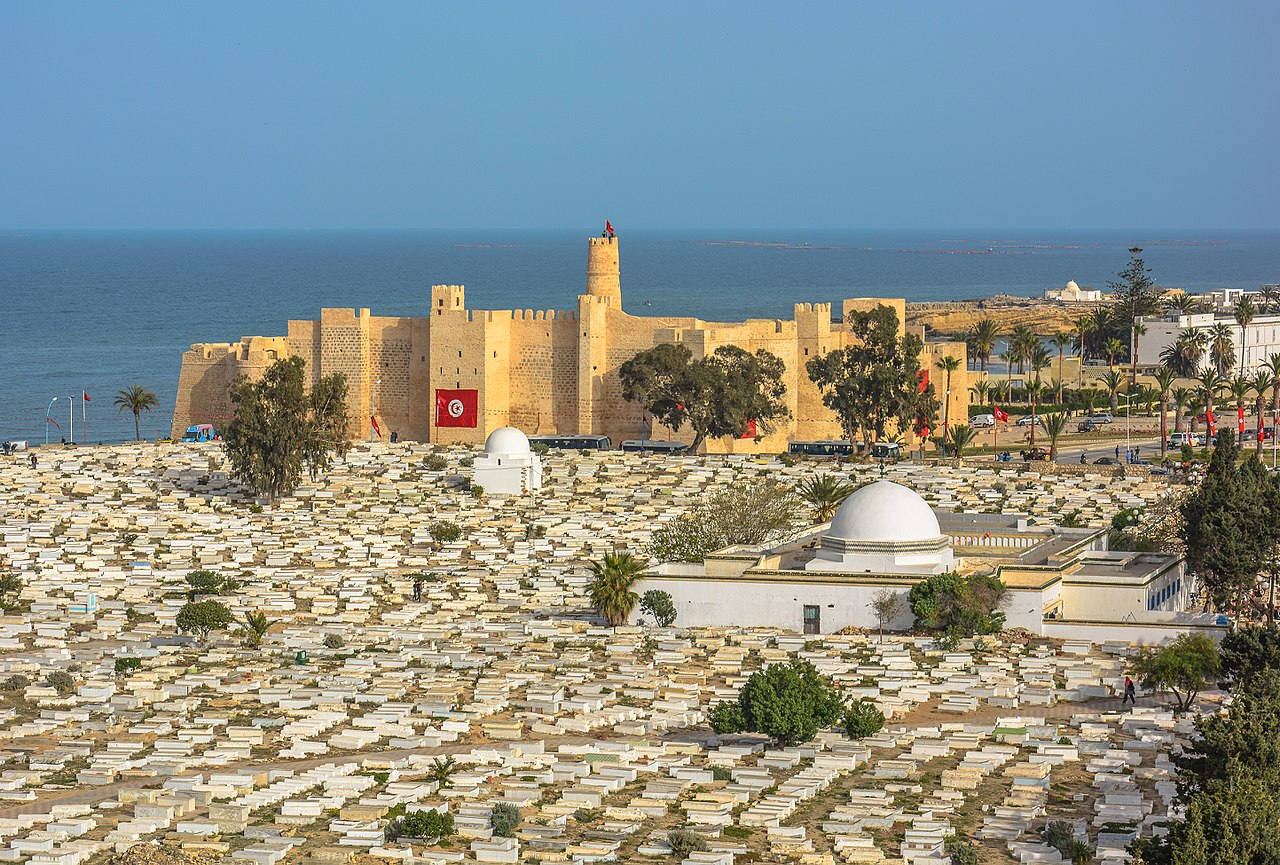 Ribat Monastir is one of the oldest and largest fortresses located in the city of Monastir on the central coast of Tunisia. This powerful Islamic defensive structure was built in 796. The total area of ​​the fortress-monastery is 4.2 thousand square meters.

Throughout its history of existence, Ribat Monastir has been repeatedly completed and rebuilt. The three-level defense complex includes:

The fortress is a religious shrine and a prestigious place of service where warrior monks served.

The towers of the fortress have viewing platforms available for tourists. And on the second floor of the main courtyard, in a small prayer room, there is the Museum of Islamic Art with a unique collection of historical monuments, chronicles, coins, ceramics, jewelry, etc. Among the most interesting exhibits are the remains of the legendary red gate of the Great Mosque of Kairouan; glass baby pacifiers; ancient sheets of the Koran; funeral steles; rich exposition of ceramics.

One of the most important parts of Tunisia's tourism infrastructure is the transport system. 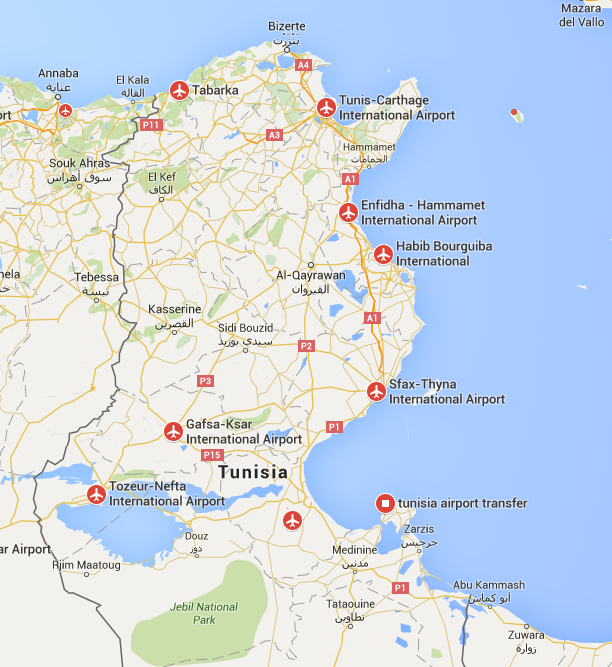 The length of the Tunisian railway is more than 2000 km: part of the railway track (473 km) has a standard European gauge but most of it is narrow-gauge (1674 km with a 1000 mm gauge, 65 kilometers of which are electrified). Therefore, trains are very cheap but not the most convenient transport for passengers. Two gauge standards lead to frequent changes and the availability of only seats does not dispose for long trips.

The main railway line runs along the eastern coast of the country from Tunisia to Sousse. 267 train stations. 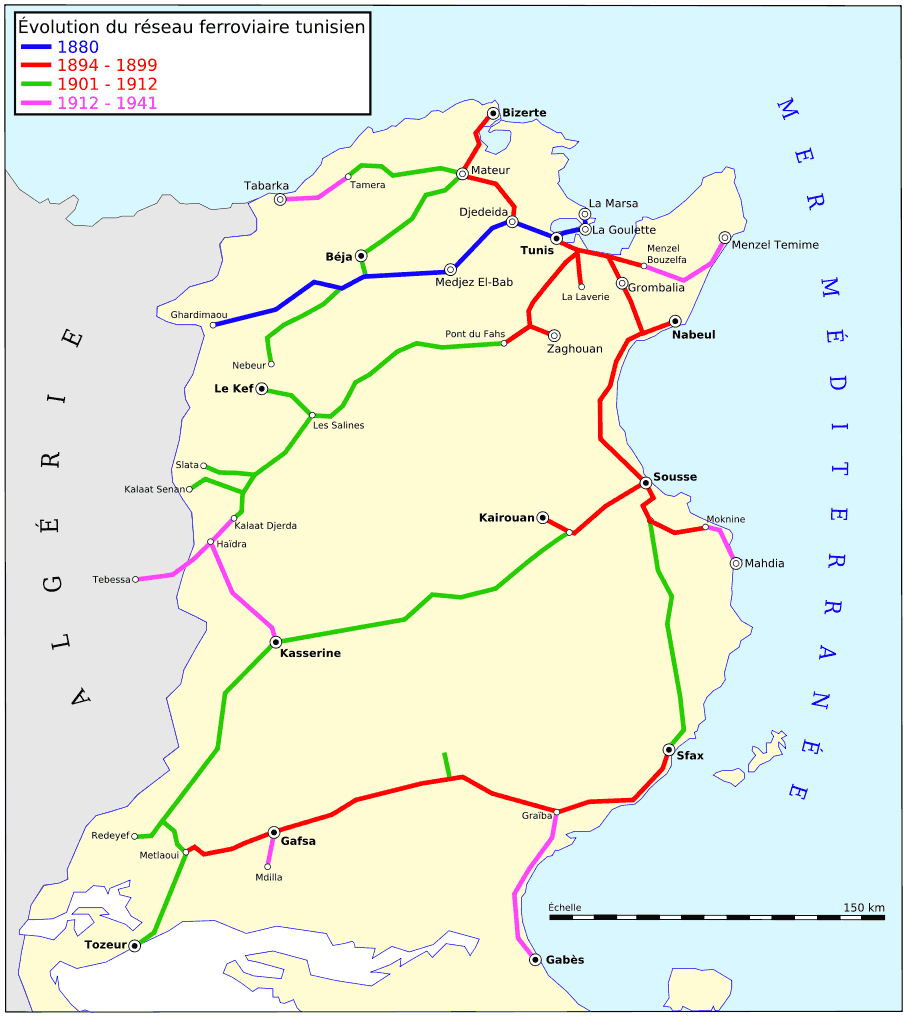 The length of highways is about 20 thousand km. Roads in Tunisia are of good quality with excellent coverage and markings and high information content with the exception of country roads and roads in the mountains. Roads play a huge role in cargo transportation.

There are four types of roads:

Autobahns (toll high-quality roads, marked in yellow on maps) are almost always duplicated by free highways. The workload is low.

National (marked in red on maps) and municipal roads (usually marked in brown on maps) have the highest congestion.

There are practically no traffic rules. On the island of Djerba, you can only move at a speed of no more than 70 km / h. 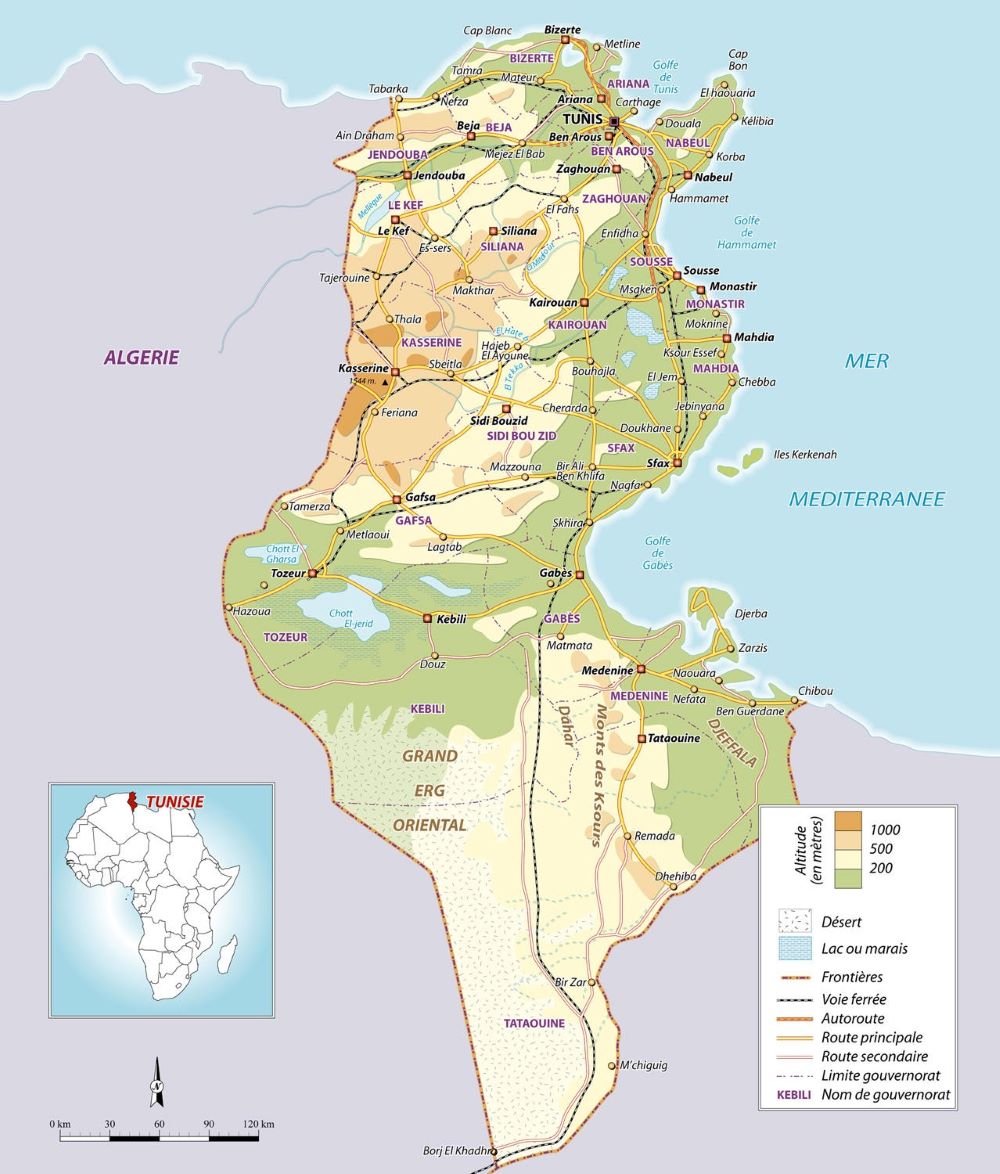 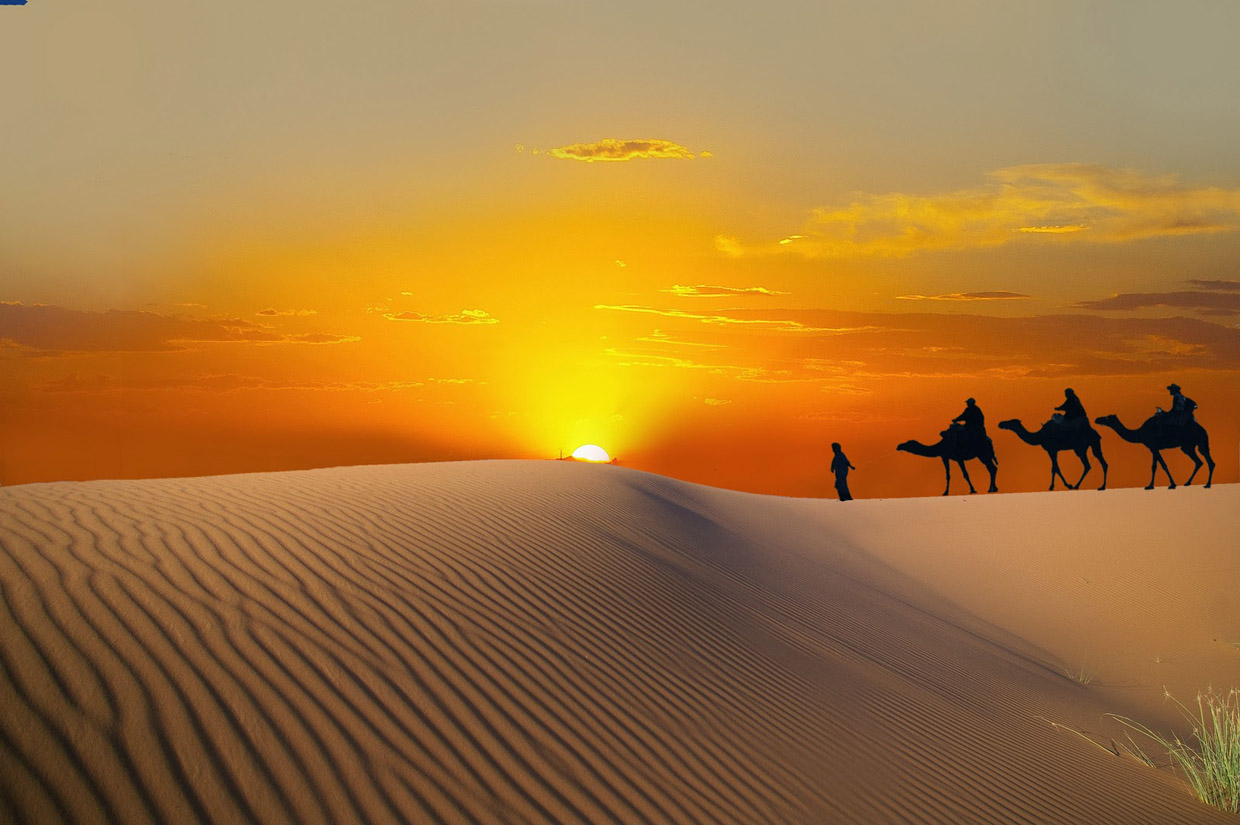 Part of the largest hot desert of the Sahara planet (total area of ​​8.6 million km²) in the south of Tunisia is the most important and popular attraction and occupies 30% of the state's territory.

The Sahara in Tunisia is represented by salt marshes, semi-sandy plains and rocky plateaus. The only thing that violates the virgin nature is the motorway (87 km) connecting the city of Douz with Berj al-Khadra, the southernmost point of Tunisia.

The best time to visit the endless sands is early spring and late autumn. In summer, the air temperature rises above 50 degrees.

Unique landscapes and extreme climatic conditions attract a huge number of tourists every year for whom a wide variety of entertainment and excursions are offered: 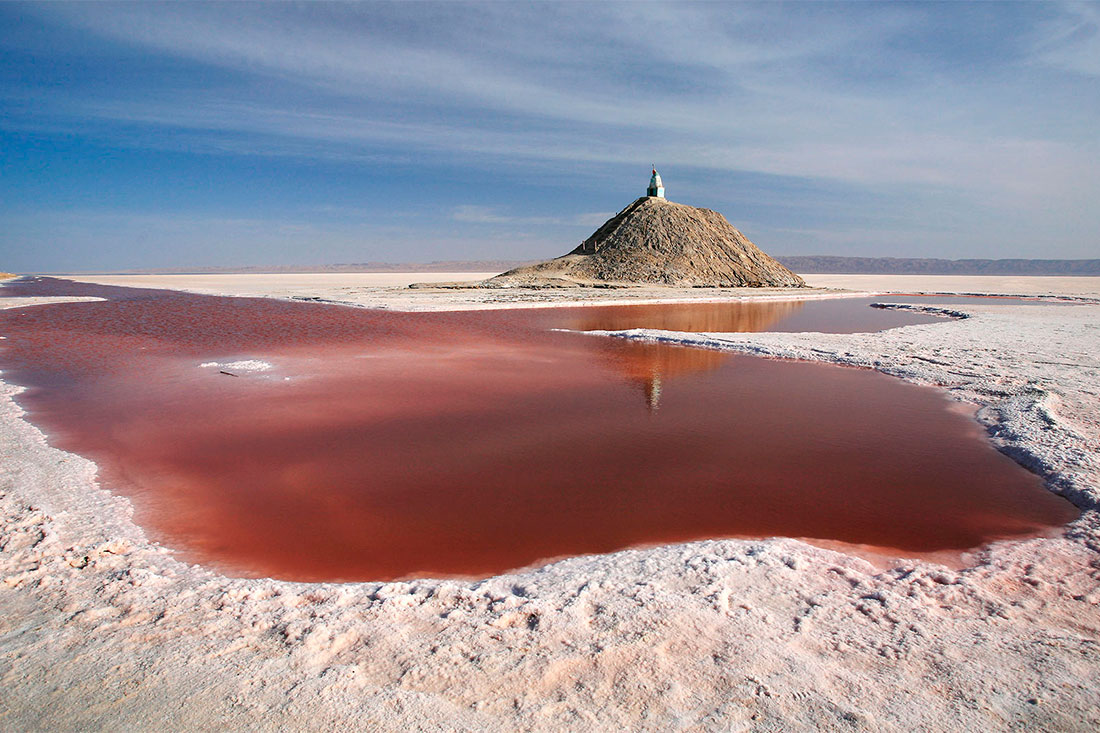 The largest salt lake in North Africa, located in the center of Tunisia. The 60 km wide salt marsh stretches for 120 km in length.

The miracle of nature in winter when the maximum amount of precipitation falls in the form of rains. Salty lake without drainage, covered with the thinnest crust of salt and a shimmering bluish-white salt edge. Lake covers an area of ​​about 7 thousand km ². In the dry summer, the lake dries up almost completely. The water evaporates under a thick layer of salt and forms crystals which are called desert roses. Due to the refraction of sunlight in crystals, complex atmospheric optical phenomena arise: fata morgana and mirages.

In the spring, flocks of flamingos build their nests here, raise their chicks until July and fly away.