Where is Turkey located? Basic information about the country 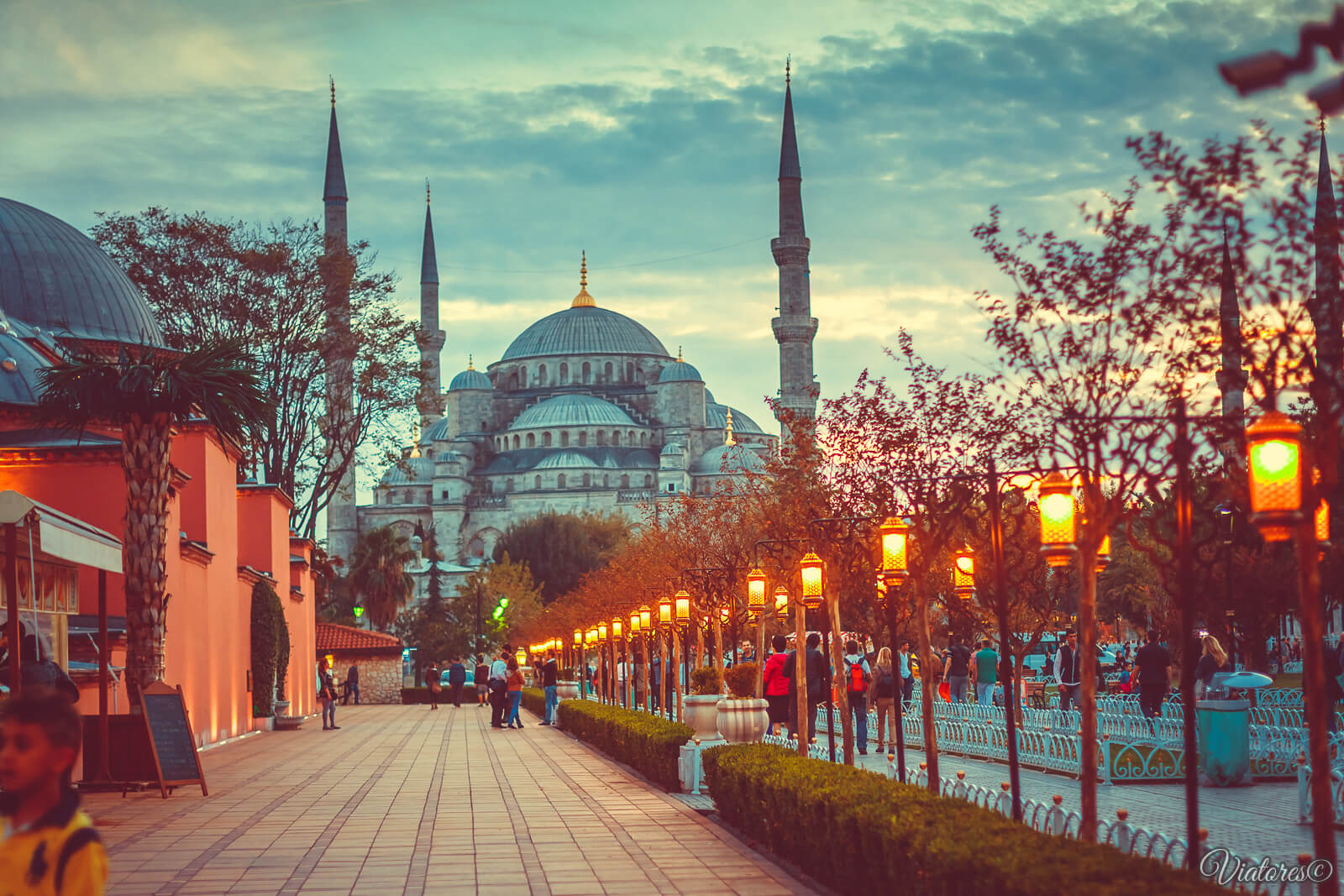 The Turkish Republic is a country in the Middle East, most of which is located in Western Asia (over 90%), and only a small part of the republic is located in Southern Europe. Turkey borders Bulgaria, Greece, Iraq, Syria, Azerbaijan, Iran, Armenia and Georgia. It is a democratic, secular and parliamentary republic with a population of more than 83 million people (density of 104 people per km²) and an area of ​​783 thousand km².
The Turkey that we know was formed in 1923 during the collapse of the Ottoman Empire with the overthrow of the monarchy and the establishment of a democratic system in the country. It is a democratic country now with a diverse, beautiful and vibrant culture, a mixture of Western, Ottoman and Turkic cultural traditions.

The country's economy is one of the fastest growing in the world, which is facilitated by a number of factors, including geographic location, inexpensive labor, foreign investment. Thanks to this favorable situation, Turkey is in 13th place in terms of GDP (PPP) and 59th place (0.806) in HDI.

The tourism industry in the country is steadily growing and makes a significant contribution to the economy. Turkey ranks sixth in the world in terms of annual passenger traffic and fourth in Europe. The following industries are popular:

The country lives in the UTC +2 time zone, and UTC changes to +3 in summer time.

Since Turkey is a country with many mountains, the climate of the territory is also mountainous with features of the continental. The Aegean and Mediterranean coasts are distinguished by a Mediterranean subtropical climate with hot summers and mild winters without snow cover. The Black Sea coast has its own special Black Sea climate with abundant rains and warm winters. The country also has a continental climate with dry, warm summers and winter snow cover and cold.

The main tourist season in Turkey runs from late April to early November.

One of the northern regions of Turkey. It covers 18% of the total territory of the country with an area of ​​115 thousand km² and a population of 7.5 million people. The center is the city of Trabzon.

The central region of Turkey. The second largest region in the country (with an area of ​​190 thousand km²). Populated by 12 million people. The center of the region is the country's capital, Ankara.

The easternmost region of Turkey. Region has a population of 5.9 million and an area of ​​148 thousand km². The predominant specialization is animal husbandry and agriculture.

Far west region of Turkey.It is inhabited by 23 million people, has an area of ​​72 thousand km². Region is located in Europe and Asia. The center of the region is the city of Istanbul.

One of the southern regions of the country with an area of ​​93 thousand kilometers. It is located on the Mediterranean coast, and has borders with Syria. Population is 9.7 million.

Southern region of Turkey. From the south it borders on Syria and Iraq. The basis of the region's economy is animal husbandry and agriculture. It has an area of ​​75 thousand km² and is inhabited by 8 million people. The center of the region is the city of Gaziantep.

The Turkish destination is very popular with tourists, and for good reason. Just look at what cultural monuments and other attractions exist in the country: 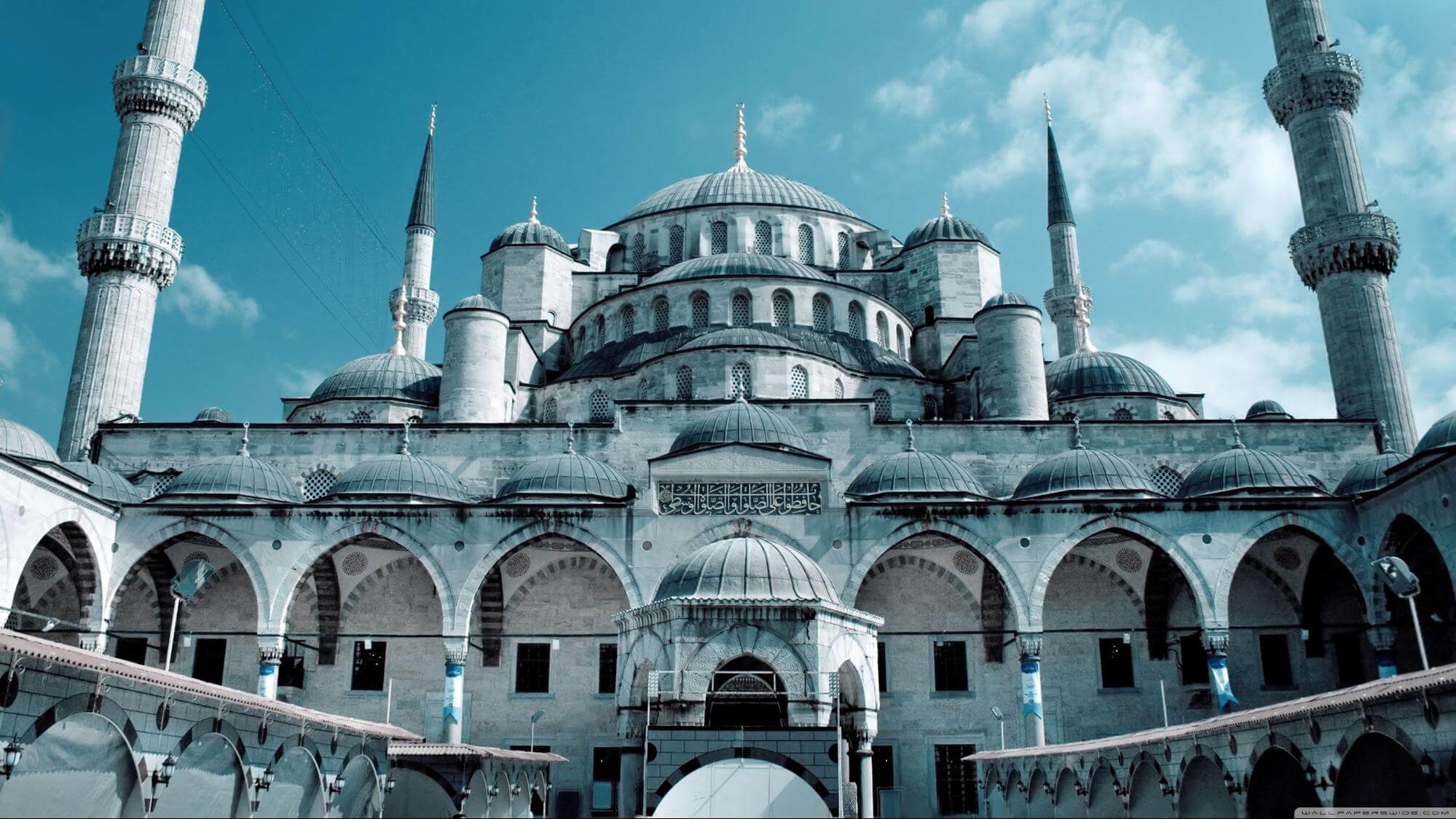 This amazing architectural monument was founded in 537 by the Byzantine emperor Justinian the Great as a grandiose Orthodox cathedral, on the site of an older Christian church. It is a symbol of the prosperity of the Byzantine Empire, which later, after the fall of Byzantium, was turned into a mosque (further, in 1935, the Hagia Sophia was turned into a museum; and in 2020 it became a mosque again).

The cathedral impresses with its amazing architecture, magnificent mosaics, complementing each other with Arabic script and Christian symbols.

At the moment, Islamic prayers are held in this magnificent building, and in the intervals between services it is possible to visit this place for tourist purposes. Mandatory conditions: women must have their heads covered and shoes must be left at the entrance.
Hagia Sophia is open around the clock, so for completeness of sensations, the cathedral is interesting to visit at night. You also need to take into account that at different times of the day, the cathedral looks completely different, due to the change in lighting. There is a park around the cathedral where you can relax between walks.
Location: Sultan Ahmet, Ayasofya Meydanı No:1, 34122 Fatih/İstanbul 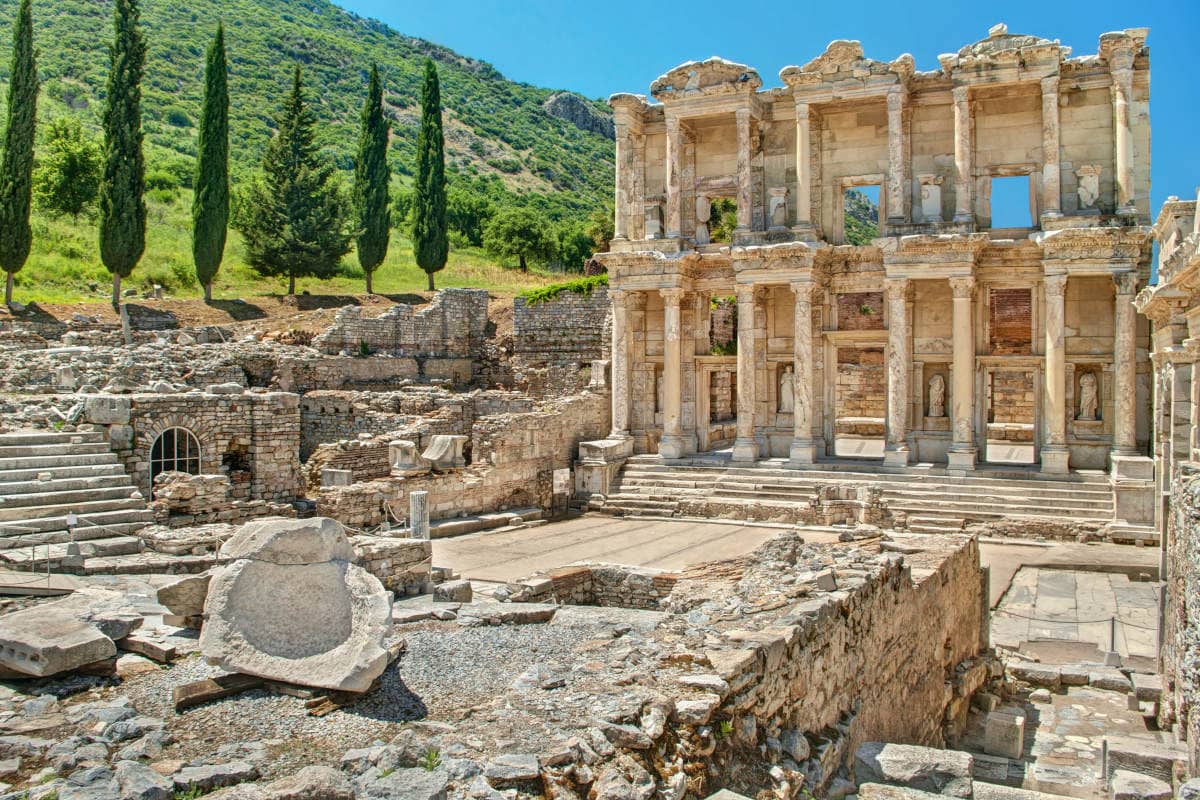 An ancient city founded in the 10th century BC, and abandoned in the 15th century. A striking place, one of the largest ruins of the ancient city that have survived to this day. Many public buildings, such as the library of Celsus, the Odeon, the Agora, the Amphitheater and many others, have remained intact.

Some of the valuable finds discovered in this city can be found in the nearest town (Selcuk).
The most famous monument of the city is the temple of the goddess Artemis, which was named one of the Seven Wonders of the World. Located a short distance from the city. In 356 it was burned, after which it was restored by Alexander the Great. After the declaration of Christianity as the official religion of the Roman Empire, it was closed and finally destroyed. Only ruins and small fragments of this ancient wonder of the world have survived to this day.
Location: Atatürk Mah, Uğur Mumcu Sevgi Yolu No: 26, 35920 Selçuk/İzmir 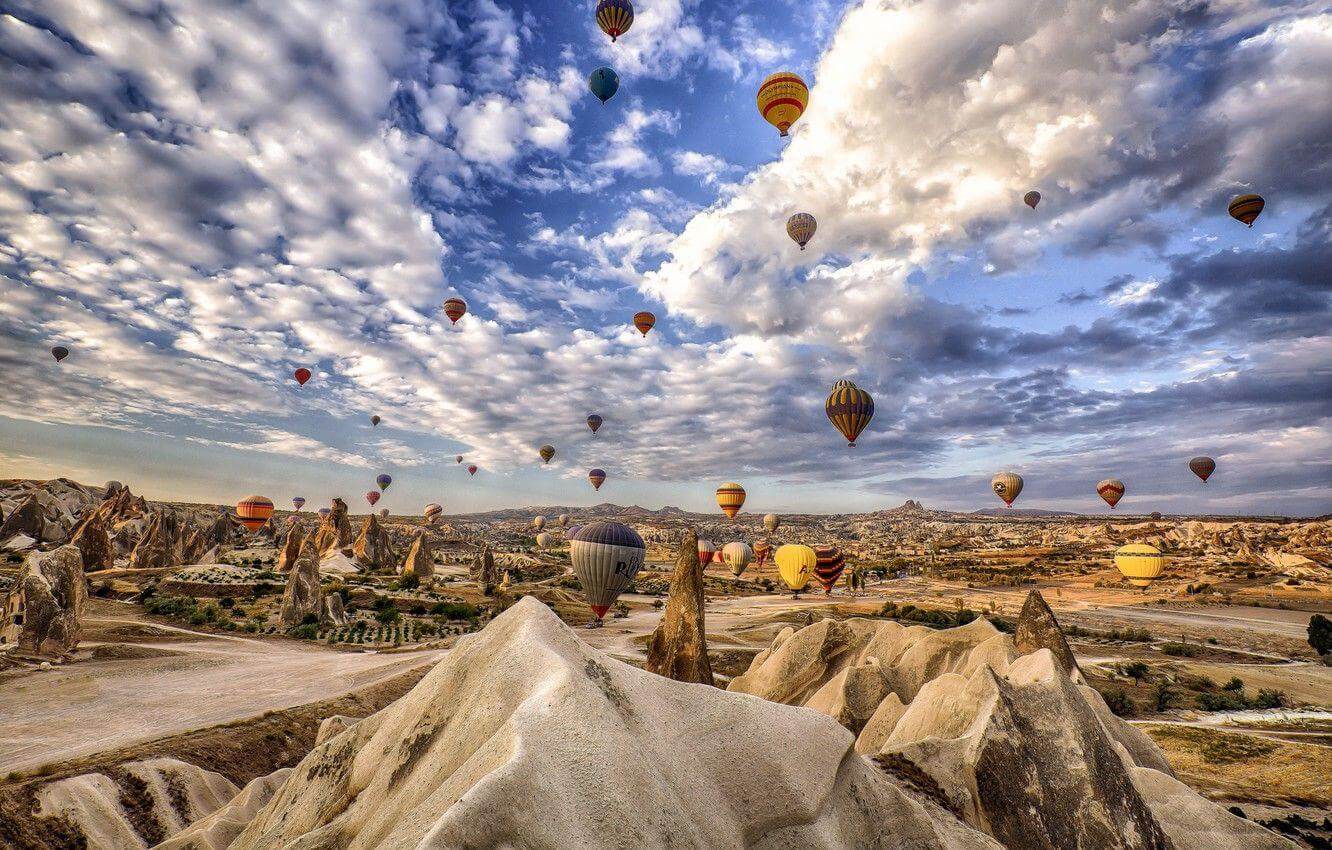 An area in the eastern part of the Anatolian peninsula with an incredible view of cosmic volcanic landscapes with cities and monasteries located in caves and underground.

Underground (cave) cities, monasteries and other structures became possible due to the special geological structure of this place. Volcanic porous rocks (tuff) covered this area tens of millions of years ago, and later they were eroded. The peoples living in this area took advantage of the softness of these rocks and formed their homes right in the rocks and underground.
Here you can see museums, fortresses, hotels, the rooms of which are located right in the caves. In nearby towns, some of the houses are built right in the rocks, towering here and there in the middle of the urban landscape.
Also, balloon flights are very popular in this place, of which there are many.
Another interesting fact about Cappadocia: it was here in the 3rd century that George the Victorious was born, a Christian saint and great martyr. 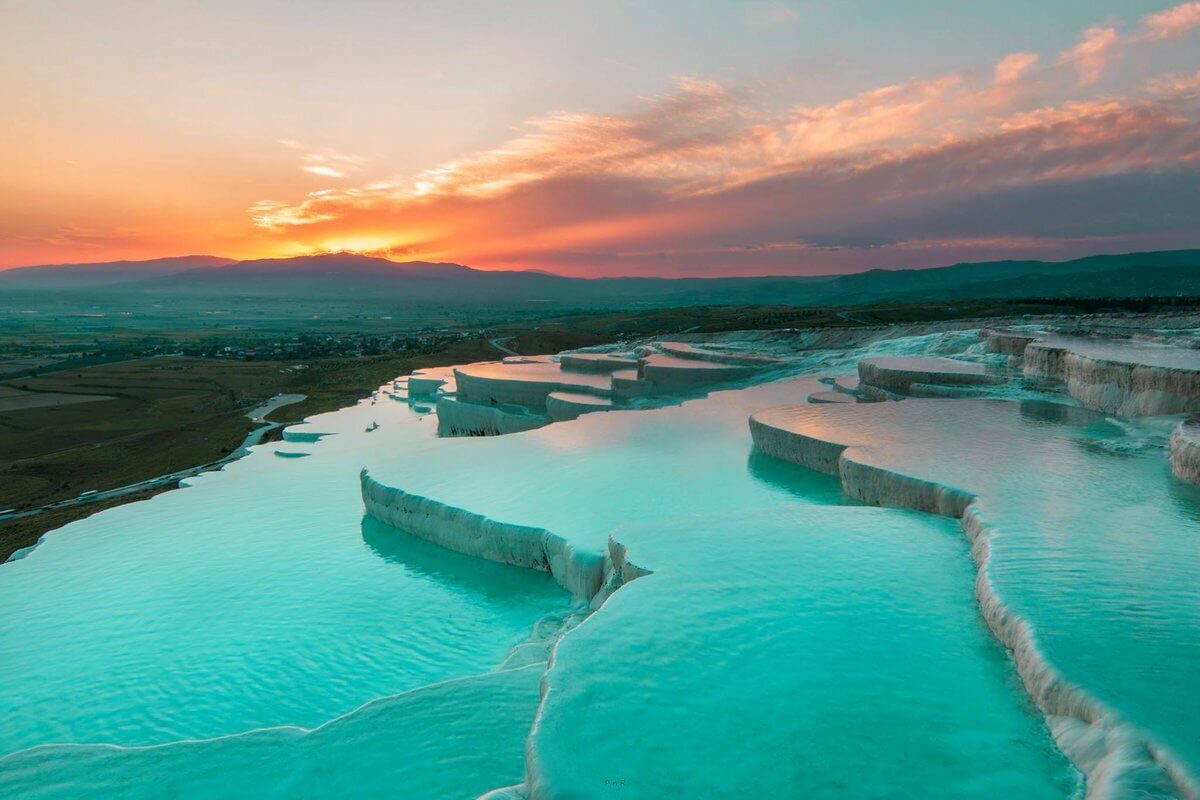 The name Pamukkale is translated from Turkish as a “cotton castle", and this is no coincidence. From afar, incredible natural travertine formations look like fluffy lumps of snow-white cotton fiber. And if you look at them from above, you can see the incredible blue color of the lake, which is simply impossible to describe in words, it takes your breath away from one look, and you must see it with your own eyes!

This beauty was formed thanks to geothermal springs with a high content of calcium. Calcium deposits on the surface of the bottom of these reservoirs, and in the process of its crystallization turns into a hard brittle mineral travertine of bizarre shapes.

It is also worth noting the ancient Hierapolis with its temples, theaters, necropolis and other buildings of the ancient city that have survived in different conditions. 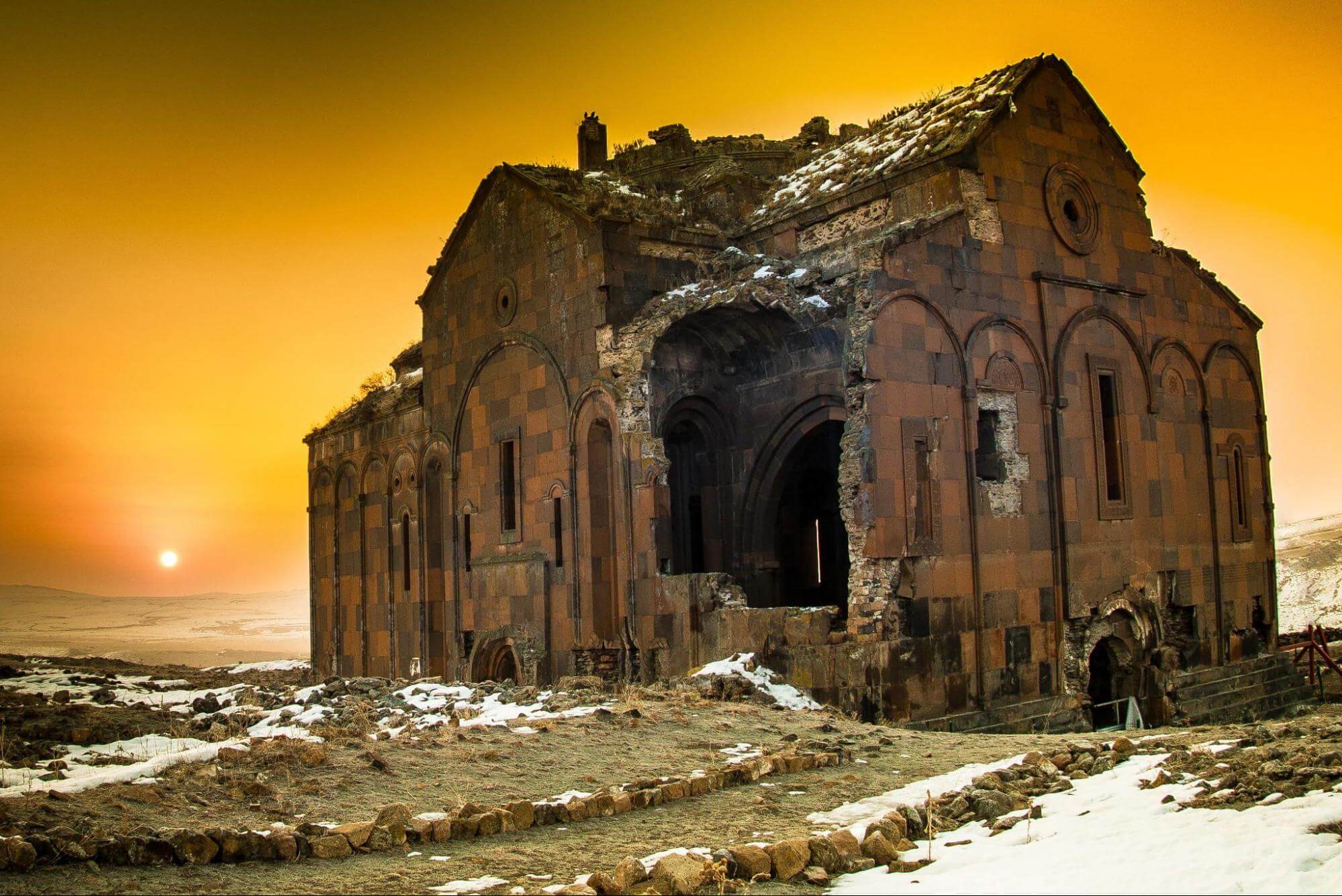 In the past, the great Armenian city, the capital of the Armenian Kingdom of Ani, in the 10th century AD was one of the largest cities in the world, which could afford to compete with Constantinople and Baghdad. Many trade routes passed through Ani. It’s buildings, fortifications, temples and other structures were famous for their technical and artistic performance.

At the peak of development, the city was inhabited by more than 100 thousand people (which was a huge number at that time).
Currently, it is a ghost town, which has been abandoned for more than three centuries. Town is now located in a militarized zone on the border of Turkey and Armenia, which does not greatly contribute to its popularity among tourists.

But, despite the situation with the border and the destruction, in this ruined medieval Armenian city there are many interesting places that are definitely worth seeing: the underground city, fortress walls, city gates, cathedrals, mosques and some of the city's palaces.

The tourism sector brings considerable contributions to the budget of Turkey, therefore, the service, including the transportation of tourists, is at a high level. The territory of the country and all famous resorts and attractions are perfectly provided with nearby airports, thanks to which access to the holiday destination is carried out as quickly as possible.

Here is a list of the five largest airports in the country:

The State Railways of the Republic of Turkey (TCDD) operates both lines for trains of standard speed (8.3 thousand km) and high-speed (590 km) with a standard European gauge of 1435 mm. Turkish and European trains move freely on each other's railways due to the same with Europe standards. Also, some of the railways in Turkey are electrified (about 30%).

Part of the coast of Turkey is called the Turquoise Coast, because of the color of the water in the many coves found here and there all along this coast.

This is one of the most attractive routes for independent travel, as this part of the country is the least developed from a tourist point of view.
Turquoise warm sea waves, small charming towns and villages, oriental flavor, beautiful beaches, boat trips on the sea, sleeping under the stars on a warm southern night attracts tourists from all over the world to this amazing place.

It is worth remembering that the tourist season in this magical place starts from the end of May and lasts until the end of September. But if you are planning a walk in the least touristy months, and are not afraid of a little cooler weather, October and April (+ early May) are suitable for you.

Traveling along the Turquoise Coast can be done by using minibuses that are used by local carriers (dolmus). Or, as a more comfortable option, consider renting a car. To visit the Turquoise Coast, you need to come from the airport to Kas or Kalkan and then choose from which of the coastal settlements to start your journey, for example, some of the most famous: Karagioz (Karaoz), Finike (Finike) ), Kaleucagız, Kaleköy, Gelemiş.